Evolution of the Suburban: 82 Years Strong 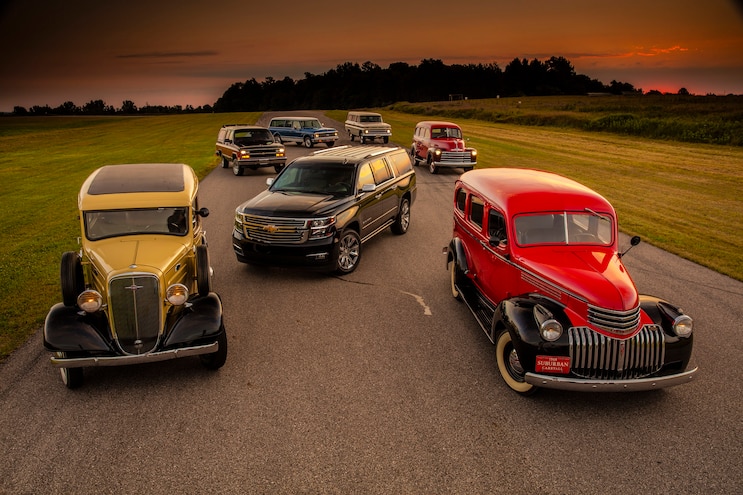 The mission of Chevrolet’s Suburban has always seemed obvious to us: bolt a big wagon body on a tough truck chassis, and the result is better at a lot of jobs than either a traditional pickup or a station wagon. As a truck, it can do most of what trucks do, including towing and toting a lot of stuff. But as a closed-body wagon, that stuff is stowed more securely inside, out of the weather. It’s not for hauling dirt or big cargo that needs to be loaded into and out of an open bed, but it can carry a work crew, a hockey team, or a large family and a lot of their stuff in car-like comfort and quiet. 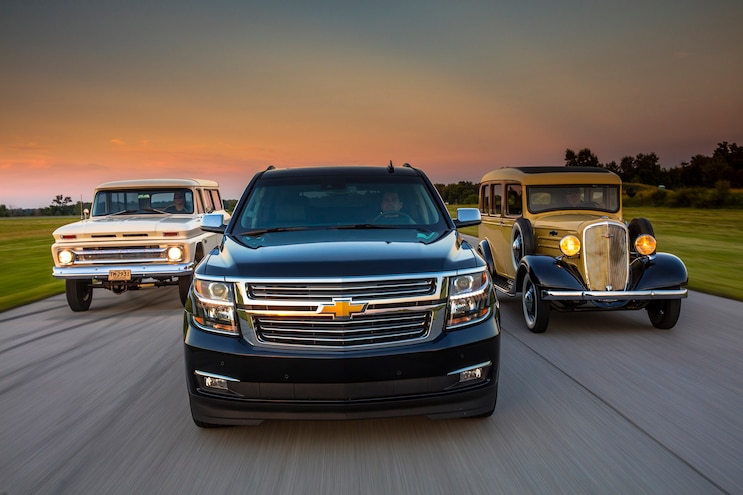 View Photo Gallery | 143 Photos
Photo 2/143   |   Evolution Of The Suburban
This author’s first Suburban encounter came during college senior year after spotting an early ’50s example on a dealer’s lot. Yours truly was driving a very uncool old Ford wagon at the time, and the idea of a big, truck-based wagon was appealing, because it would swallow a motorcycle and lots of other stuff for the trip home after graduation. That one looked good and was in surprisingly good shape. But it was slow, noisy and clunky to drive. It was an old truck, after all, not ideal for flogging over mountain roads that even the wagon handled fairly well. Ultimately, keeping the Ford was the most sensible decision.
But the Suburban idea was planted, and over the years, we would own a used ’69, then a new ’73, for towing a race car and toting all the related stuff. Since the Suburban offered plenty of covered storage for race parts, as well as cabin seating for a lady friend and as many volunteer crewmembers as possible to help at each event, the Suburban was the obvious choice. It was the world’s greatest tow vehicle. 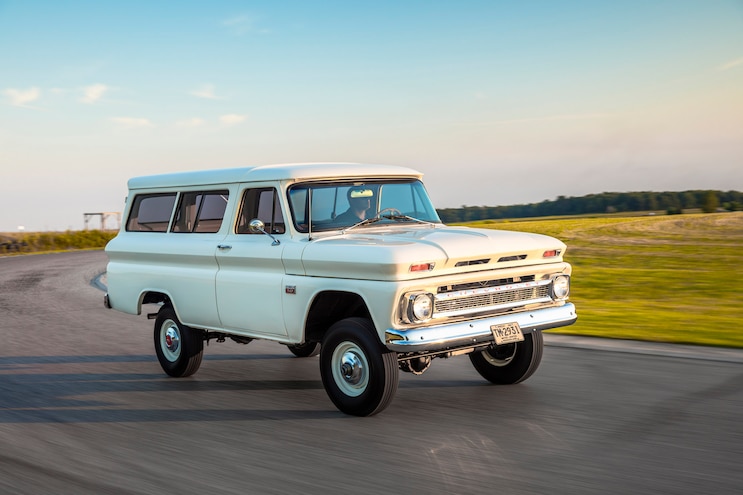 View Photo Gallery | 143 Photos
Photo 3/143   |   Evolution Of The Suburban 1966
Did you know the Suburban dates all the way back to the 1935 debut of Chevy’s two-door Suburban Carryyall? Rolling on a 112-inch wheelbase and powered by a 60hp, 207ci (3.4L) “Stovebolt” inline-six, it could seat up to eight or carry 137.4 cubic feet of stuff with the second row folded and the third row removed. GM—and most everyone—saw it back then as a strictly commercial vehicle, good for hauling work crews and cargo. It wasn’t until after World War II that private customers began to see its versatile appeal.
So when Chevrolet offered Truck Trend an exclusive opportunity to drive the GM Heritage Center’s collection of historic Suburbans, we jumped at it. No matter that we would drive them around Gingerman Raceway in Western Michigan, not on public roads, since they were old, unlicensed, and in varying states of running condition.
We started with the oldest example, a ’36. Upgrades from the ’35 included 19 more horses and 140 lb-ft of torque to move its 3,300 pounds, along with new hydraulic brakes to better slow them. A radio, clock, dual wipers, and even a heater were optional, as were the two spare whitewalls mounted on its front fenders. The central speedometer was flanked by fuel, water temperature, oil pressure, and amp gauges inside the big-three-spoke steering wheel, the side windows rolled down, and the driver seat (like the rest) was fixed in place with no adjustment. 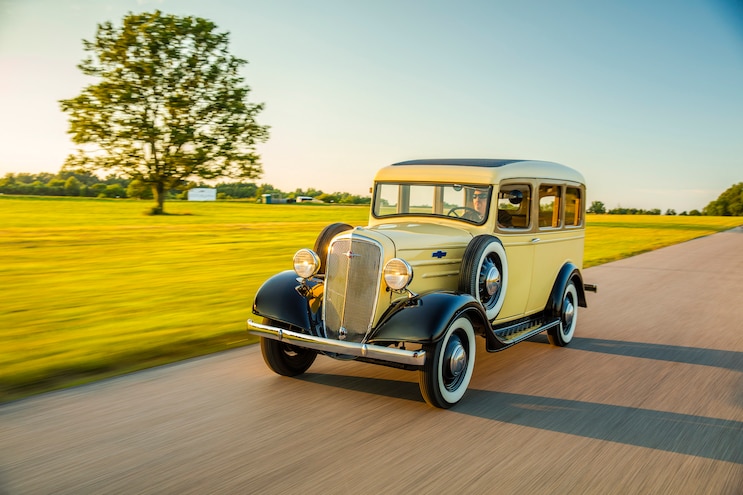 View Photo Gallery | 143 Photos
Photo 4/143   |   Evolution Of The Suburban 1936
We started the Stovebolt six with a step-on button, crunched the three-speed floor shifter left and back into First, eased out the old clutch, and rumbled away. Not surprisingly, acceleration was modest, shifting was a chore, the steering had a ton of free play, and the brakes seemed barely there. But at slow speeds, at least, the 81-year-old Suburban on its skinny, old Firestones handled Gingerman’s curves reasonably well. Base price back then was $685.
The decade-newer ’46—essentially a rebooted ’42, since U.S. private vehicle production ceased during World War II—boasted 90 hp and a fairly hefty 165 lb-ft from its updated 216.5ci (3.8L) six, plus a new instrument panel and improved interior trim, but it was otherwise not much different from the ’36, apart from more modern styling and a 3-inch wheelbase stretch to 115 inches. Its clutch was stronger, and it ran a bit better, but it had the same three-speed floor shift, fixed seats, wonky steering and weak brakes. Base price: $1,350.
The ’51—same vintage we’d driven in college—wore new-for-’48 styling inside and out on a 116-inch wheelbase, a choice of side-opening “barn doors” or top-hinged tailgate out back, and double-acting shocks said to give “superb riding comfort.” Renamed “Thriftmaster,” the old six cranked out 92 ponies and 176 lb-ft to motivate its 3,640-pound base curb weight. Its side windows slid open instead of rolling down, its three-speed shifter was column mounted, and (hooray!) its driver seat adjusted fore/aft. This fine example had just 30 miles on its clock, so it drove surprisingly well apart from sloppy steering and weak brakes. Base price: $1,818.
Next was a high-riding four-wheel-drive ’66 powered by a 175 hp, 275 lb-ft, 283ci (4.6L) small-block V-8. In its last year before a ’67 redo, it offered more comfort and amenities and new safety features including seatbelts, back-up lights, and two-speed wipers. The standard 230ci (3.8L) six drove its rear wheels through a “three-on-the-tree” transmission, while the 283 V-8, a 220 hp 327 (5.4L) V-8 and a “four-on-the-floor” gearbox were optional. It also drove more like a modern truck, though its rockcrawler driveline made First gear near useless on pavement and Fourth feel like Third at 35 mph. Some 13,000 ’66 Suburbans were sold starting at $3,250. 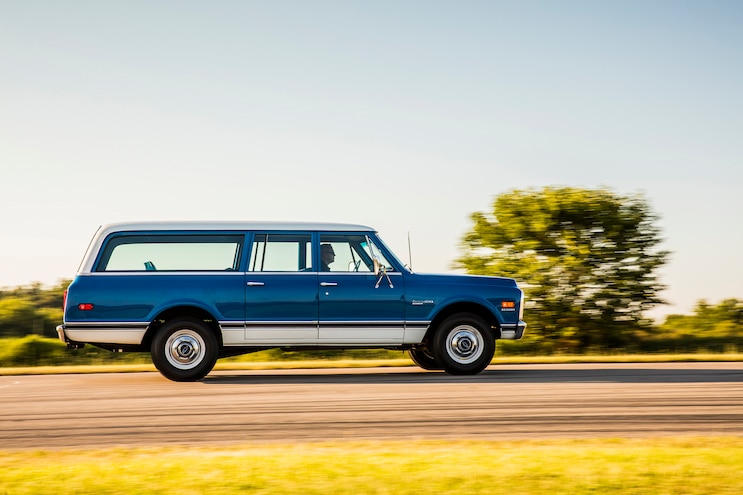 View Photo Gallery | 143 Photos
Photo 5/143   |   Evolution Of The Suburban 1973
The ’72—one year before an all-new ’73—brought a new level of performance and dynamics with its 175 hp, 350 lb-ft, 350ci (5.7L) V-8. Significantly longer on a 127-inch wheelbase, this generation had a unique three-door body (one for the driver, two on the passenger side) and much more cargo room behind its third row. Standard front-disc brakes were offered beginning in ’71, and engine choices ranged up to a 402ci (6.6L) big-block V-8. This ’72, with its 350 V-8 and four-speed manual (three-speed automatic was an option), drove well with good handling and much better steering and brakes. More than 27,000 ’72s were sold with a base price of $2,930.
The much more refined ’90 rode on the longer 129.5-inch wheelbase platform launched for ’73 with more comfort and more carlike dynamics for the growing number of folks using Suburbans as personal vehicles capable of towing trailers on demand. Gentrification continued for ’87 with electronic fuel injection and a four-speed overdrive automatic transmission, and antilock brakes were offered in ’88. By ’90, a 5.7L V-8 was standard and a 7.4L big-block was available for those who needed more. The very civilized 210 hp, 300 lb-ft, 5.7L V-8, four-speed automatic 4WD example we drove handled, rode, steered, and braked much like a modern truck, despite its 28-year age. With a base curb weight of 4,500 pounds and a $15,165 base price, ’90 Suburban sales approached 63,000. 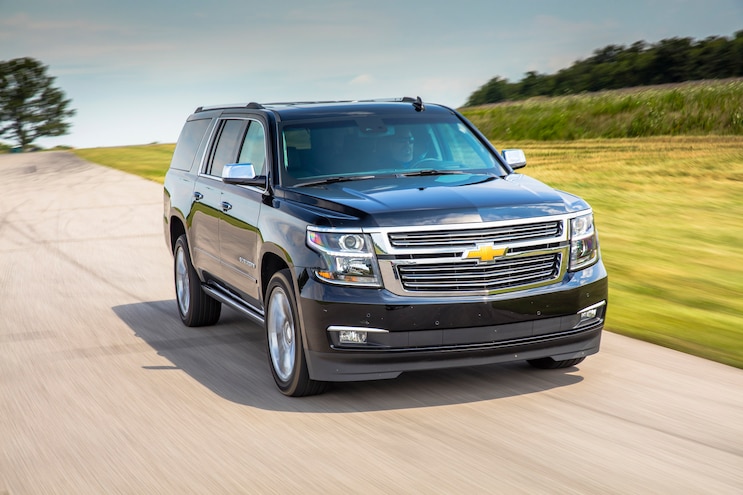 View Photo Gallery | 143 Photos
Photo 6/143   |   Evolution Of The Suburban 2017
Finally, we had to try the fully loaded, $77,805, ’17 Suburban that Chevy had on hand. Wow, what a sweetheart this popular wagon has grown up to be! Even driven fairly aggressively around the 2.1-mile Gingerman road-racing course, its 5.3L Ecotec3 V-8 delivered plenty of power (with 18-mpg EPA combined economy), its highly developed suspension handled both slow and fast corners with aplomb, and its full-featured cabin offered luxury car-like comfort and quiet. Other choices are on the market, but this is certainly the best Suburban yet and one of the best vehicles ever at combining towing prowess with rugged capability and passenger space.