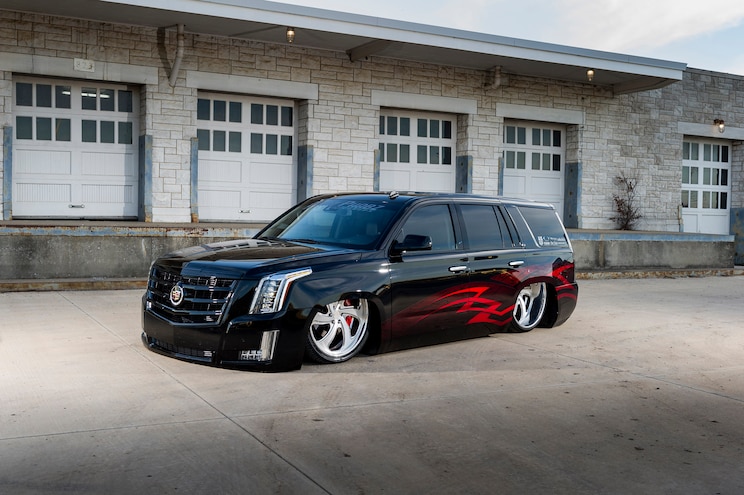 People always use the term, “Rome wasn't built in a day,” meaning perfection takes time. Well the Romans did not have Jake McKiddie of Phat Phabz, OKC, obviously, because the Rome of Cadillacs was fully built including paint in less than a month; Jake's portion in 2 weeks. For those of you who may be new to the body drop world, that is an immense amount of work in very little time. Before we get ahead of ourselves, we will start from the beginning. 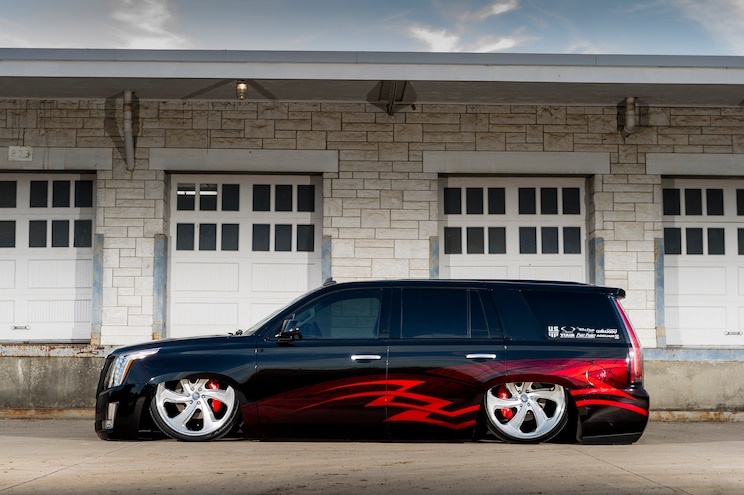 View Photo Gallery | 17 Photos
Photo 2/17   |   2015 Cadillac Escalade Cashing Checks Side View
Having known Jake for a long time, not only as a builder and a friend, but also as a fellow Severed Ties member, they talk often as friends always do, and made a joint decision that they wanted to build something together for SEMA. For veteran builders like them, even making SEMA was not a challenge enough, so they decided whatever they would build needs to be the first of its kind; and to make sure it took the internet by storm. Being a big guy and also a man who loves luxury vehicles, it was clear to Carlos what they needed to do. Body drop the first 2015 Escalade on 26s. With that goal in mind Carlos began the hunt for a 2WD Escalade, after a few weeks he finally found one in Dallas, Texas. He traveled there from Eunice immediately, bought the 2015 Escalade brand-new off the show room floor, and drove it directly up north to Jake at Phat Phabz in Oklahoma City with no hesitation. View Photo Gallery | 17 Photos
Photo 3/17   |   2015 Cadillac Escalade Cashing Checks Rear
Being on such a short deadline until SEMA, Jake and the Phat Phabz crew wasted no time in getting to work on the task at hand. Pulling it into his shop right at the beginning of October, there was less than a month before SEMA to make this brand new Escalade unlike anything the automotive world had seen before. Luckily, this was not Jake's first rodeo at building a one of a kind ride; nor was it Carlos first, having a previous cover truck in his resume (a 2008 GMC Sierra 1500). Upon getting the Cadillac's body off its' luxurious base, they got to work on building the frame and putting together the new 4 link set up for the suspension. Phat Phabz made a custom 3/4 frame out of 2x4 3/16-inch rectangle tubing for the body drop. Once that not-so-easy task was sorted, a 23 gallon fuel cell was placed behind the rear axle to accommodate the 26x12-inch rear wheel that would be tucking inside that SUV's body upon completion. In addition to the bag set up in front and rear, a one off rear sway bar was created, Wilwood 16-inch kits were put on all four corners of the vehicle with large TX6R calipers sitting atop them. As if the parts list was not impressive enough already, Carlos was one of the first to debut the new Endo VT Tank from Accuair for its SEMA debut. 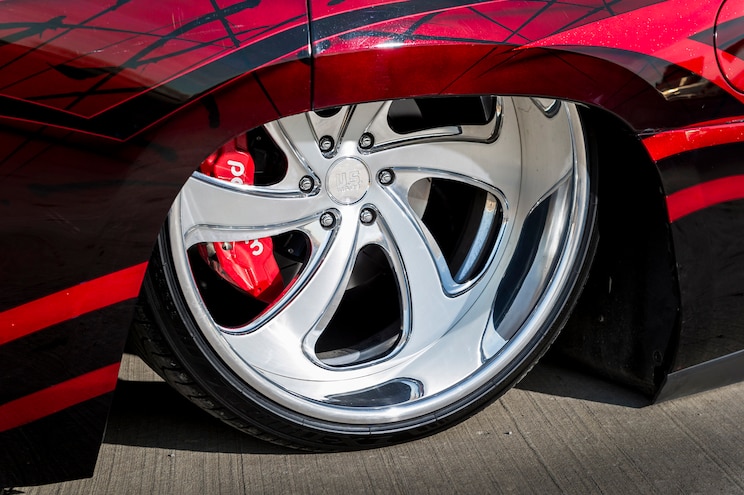 View Photo Gallery | 17 Photos
Photo 4/17   |   2015 Cadillac Escalade Cashing Checks Wheel
With far more steps than we talked about completed, the now laying body Escalade skated out the doors of the Phat Phabz OKC compound in just 14 days, and believe us when we say this; this was BUILT TO DRIVE, like all McKiddie creations are. No time wasted, the Escalade was driven over to Charles Degand to get the paint and graphics knocked out. In addition, Degand blacked out various trim pieces across the vehicle that came from factory as chrome. Degand really came through knocking out his share of the large workload in such a short time frame. Many painters would have spent months to have an end product that looked anything close to Carlos Herrara's did. 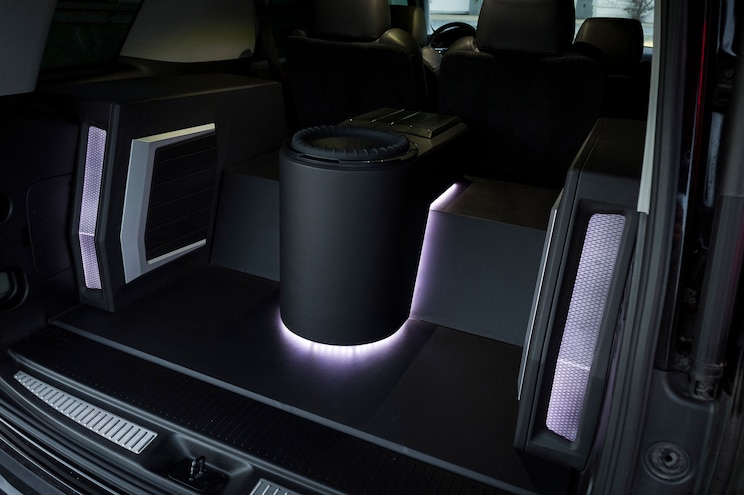 View Photo Gallery | 17 Photos
Photo 5/17   |   2015 Cadillac Escalade Cashing Checks Kicker
Purely to avoid paint chips from the drive from Oklahoma to Vegas since it was SEMA; Carlos and the Phat Phabz crew loaded the Escalade on a trailer and hit the road. Having prime parking in its debut outside the main doors of the show hall, it is easy to say the build succeeded in breaking the internet as they planned. It grabbed attention from every passerby that crossed it, just as it does as Carlos drives the hell out of it- daily.