A Cut Below the Rest

Part of what makes the world of custom trucks so enthralling is its collection of individuals with common passions. The other part is the individuality that comes with so many diverse enthusiasts. It's this recipe that allows for long-lasting styles and genres but allows them to be expressed in innovative and uncommon ways. It's this diversity that continues to elevate and grow truckin’ culture. One of these unique individuals is Juan “Johnny” Martinez. The long-standing Severed Ties member has previously built a bodied OBS Chevy Silverado among numerous other builds. For SEMA 2016, Johnny Martinez sought out to build a truck of classic heritage with modern accents and innovative features. This led him and the crew from Ekstensive in Houston, Texas, to tackle one of the very first bodied F-150s of the current generation. 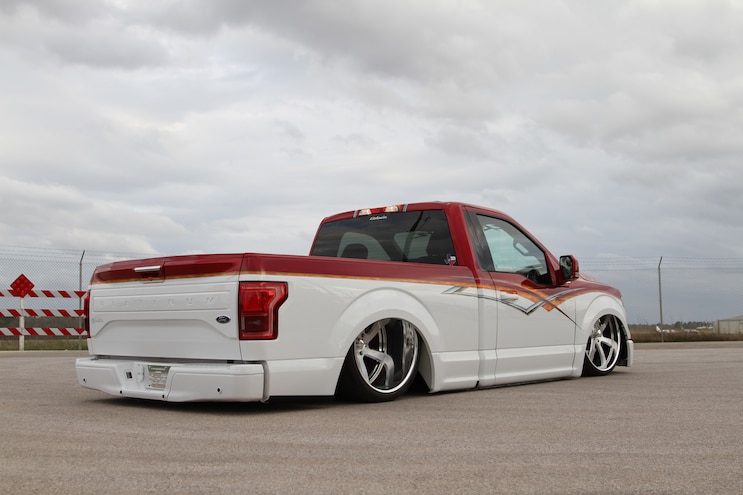 View Photo Gallery | 18 Photos
Photo 2/18   |   2016 Ford F150 Ekstensively LOW Rear
For this extraordinary endeavor, the build began with a one-off custom, complete chassis. The experienced team at Ekstensive fabricated the frame from the ground up. The result is an extremely well balanced and rigid platform on which they built the custom F-150 to lay hard to the pavement, breaking necks at every turn. The rear uses a C-notch transition and four-link set up with a fully powdercoated chassis. At each of the truck’s four corners sits an Air Lift Dominator ’bag, which suspends the truck comfortably and accurately through a range of road-worthy heights. At their lowest setting, the bodied truck sits snugly on the pavement below with quick access to multiple drive heights. 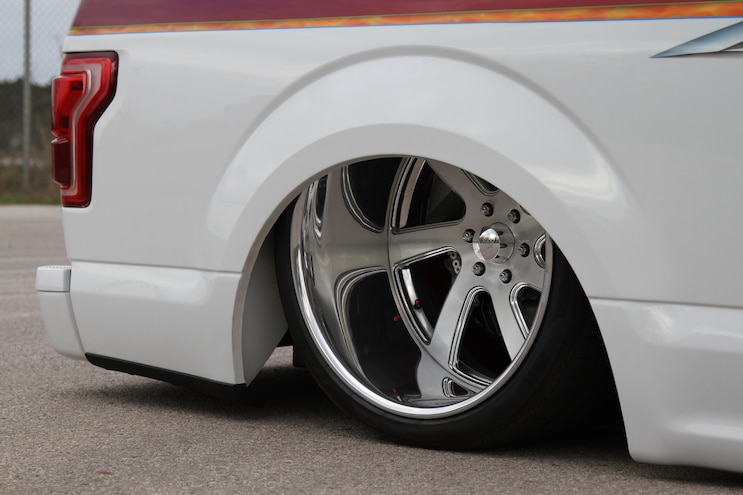 View Photo Gallery | 18 Photos
Photo 3/18   |   2016 Ford F150 Ekstensively LOW Wheel
One of the truck’s most stunning features is its luxurious choice in wheels. Though tucked within the hand-built fenders, the U.S. Mags make quite the statement. The wheels are a two-tone finish with custom-machined spokes and polished lips. The subtle contrast is eye-catching at a standstill and down-right mesmerizing in motion. The staggered arrangement measures 24 inches in the front and a staggering 26x15 wide rears. Nestled behind each dazzling seven-spoke wheel is a combination of Wilwood brake components. The big brake kit is comprised of oversized calipers, rotors, and stainless-steel brake lines. The stopping power is put to good use in this application on account of what awaits beneath the hood.
In terms of trucks, this F-150 is the perfect union of beauty and beast. Powering the modern Ford is the infamous 5.0L Coyote V-8. The potent power plant is fortified with a Whipple Supercharger. The blower installation and tuning were carried out by Triangle Speed Shop in Orange, Texas. Balancing out the forced induction is a one-off 3-inch stainless exhaust system ending in dual Magnaflow mufflers. This truck is certainly as tough as she looks. The brash stance combined with its ability to slay tires completes the whole truckin’ package. 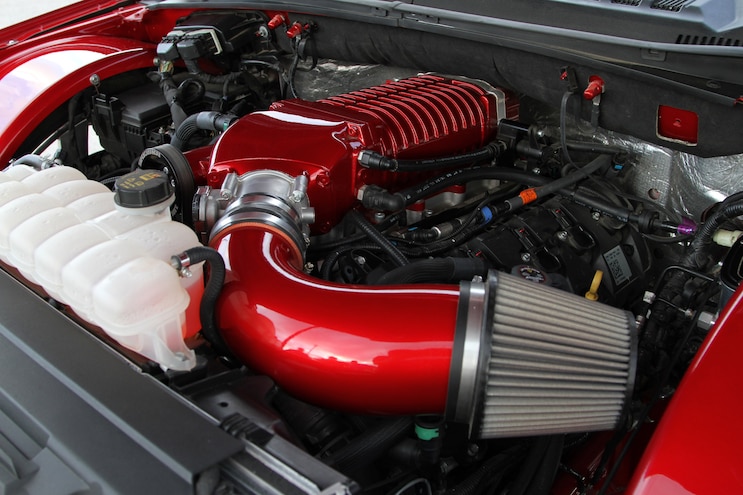 View Photo Gallery | 18 Photos
Photo 4/18   |   2016 Ford F150 Ekstensively LOW Engine
Achieving its perfect look is a series of masterful body modifications that had never been tackled before. This being one of the first bodied F-150 of the current generation meant the Ekstensive had their work cut out for them with body modifications consisting of hand-made aluminum components. The 2015+ F-150 feature a full aluminum body, and this unique construction brings its own set of obstacles. Johnny and the Ekstensive crew were relentless in their vision, though. The final result is custom aluminum inner fenders, a shaved and relocated gas filler, and a functioning aluminum sunroof. The sunroof was a truly special touch that helps to set this build apart from the rest.
After the immense amount of bodywork was finished, the team applied the truck’s signature paint style. In a classic two-tone configuration, the Ford sports an Alpine White and Candy Red scheme. Traditional hand-painted graphics done by Pat Maxwell overlay the white-on-red for a depth effect iconic to high-end custom truck builds. The airbrush graphics consist of Candy Tangerine and Yellow. The spear graphic is painted using a realistic chrome effect in shades of blue, black, and highlights. Finally, Pat capped off his graphic work with a bold outline of 1Shot Striping Enamel. 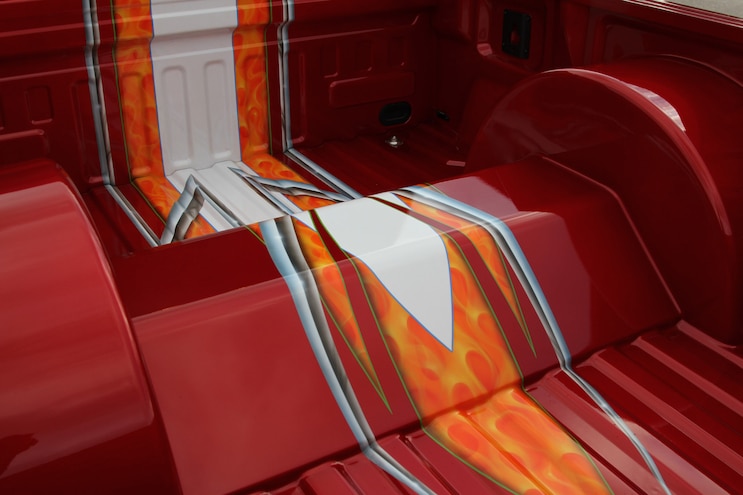 View Photo Gallery | 18 Photos
Photo 5/18   |   2016 Ford F150 Ekstensively LOW Bed
The comprehensive build perfectly puts together various components. The one-off chassis, the suspension, wheels, and stance, the dramatic bodywork and paint all work together to form an extraordinary build. The final piece of the puzzle comes by way of Twisted Interiors in Woodlands, Texas. John Burgess and his team put together a styling interior and superb audio system. First up were custom leather seat covers with diamond stitch pleating. The carpet was replaced with black, along with a custom suede headliner. A custom ported console and system enclosure was placed in the cabin. Behind its acrylic windows, the console houses dual JL Audio 8W7 subwoofers. The subs are amplified by a JL ZR6.5 and a JL ZR8. For highs and mids, JL Audio HD60 speakers were custom fit to the door panels. The door-mounted speakers are amped by an Audison Bit One audio processor. 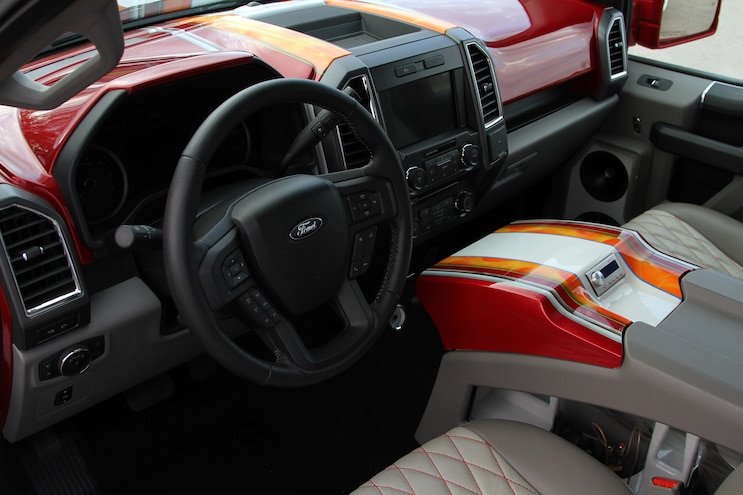 View Photo Gallery | 18 Photos
Photo 6/18   |   2016 Ford F150 Ekstensively LOW Interior Dash
In this bar-setting F-150 build, Ekstensive truly lived up to their name. No metaphorical stone was left unturned and no bolt untouched. The crews responsible for the production put together one of the most exciting trucks displayed at SEMA. From top to bottom, the Ford pieces together the best of truckin’ style. It combines serious American muscle with iconic styling. The full-custom frame required masterful fabrication and attention to detail, as did the exclusive aluminum bodywork. The paint, system, and interior all shout the truck’s individuality at the top of their lungs. Nevertheless, the combination is classic and full of truckin’ traditions. A landmark for the genre, this bodied F-150 remains a cut below the rest.

- OF
By Michael Phillips
2 Articles