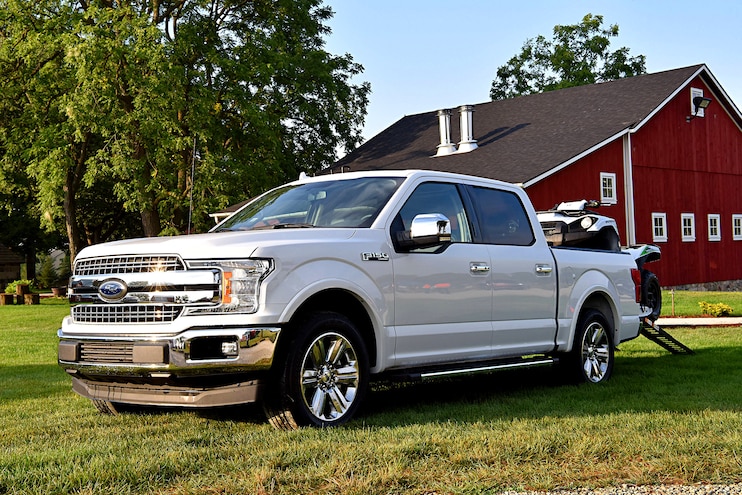 After 40 years reigning as America’s best-selling pickup, 35 years holding court as the top-selling vehicle in the U.S., and a complete redesign of its fullsized lineup in 2015, you might think Ford would be ready to take a rest. 2018 could have easily been a year for Ford to bestow its F-150 with a minor refresh and a couple of new trim packages. Thankfully, that’s not the case.
Now celebrating 100 years of pickup history hearkening back to the 1917 Model TT and leading through 70 years of F-Series trucks, Ford is facing stiffer competition than ever. Updating its pickup for a mid-cycle refresh, Ford says its legacy is to be an “engine of progress to build trucks that work hard and play hard, with continuous innovation and technology that improves function.” What does that mean? Drawing on its core DNA, Ford’s engineers and designers have made the new ’18 F-150 tougher and more capable than ever thanks to a new powertrain lineup and a 10-speed transmission, along with a larger rear axle that increases the maximum gross combined weight rating and raises towing to a new best-in-class 13,200 pounds while bumping maximum payload to a segment-topping 3,270 pounds. There are six new wheel choices, four new interiors, a selection of different grilles, five revamped engines, and two automatic transmissions.
Looking at the ’18 F-150, the first thing you’ll notice is bold styling emphasized by a new horizontal twin-bar grille and C-clamp LED sidelights. The chamfered nose, fenders, and beefy wheel and tire proportions are meant to underscore the truck's improved power and ruggedness. At the rear are new taillamps and a freshly designed tailgate with updated appliques. 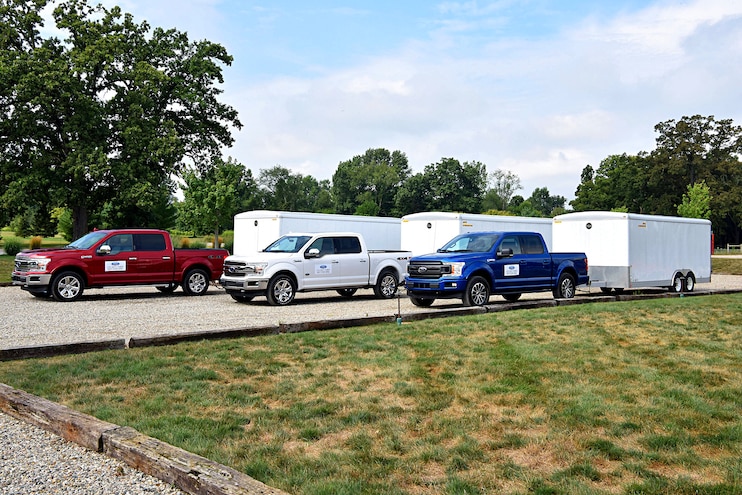 View Photo Gallery | 103 Photos
Photo 2/103   |   2018 Ford F150 First Drive Options
Under the hood lives a base 3.3L V-6 engine that produces 290 hp and 265 lb-ft of torque; a second-generation 2.7L EcoBoost V-6 produces 325 hp and 400 lb-ft; an enhanced 5.0L V-8 received significant upgrades, including advanced dual port and direct-injection technology, which are good for 10 more horsepower and an additional 13 lb-ft, bumping output to 395 hp and 400 lb-ft. The second-generation 3.5L EcoBoost V-6 is punched up to 375 hp and 470 lb-ft of twist, which bests all diesel- and gasoline-powered ½-ton competitors. A high-output version of this engine has been tuned to boost performance to a massive 450 hp and 510 lb-ft, but it’s only found in the Raptor for now.
Ford's 10-speed SelectShift automatic transmission is mated to all engines, except the base 3.3L Ti-VCT V-6, which is shifted by a six-speed auto. The F-150 is the first fullsize pickup truck to include fuel-saving auto start/stop technology as standard equipment across all models and engines. An all-new 3.0L Power Stroke turbodiesel V-6 that has been designed, engineered, and tested in-house will become the first diesel engine to join the F-150 lineup when it becomes available next spring.
We drove the 2.7L and 3.5L EcoBoost pickups, which comprise about 65 percent of sales. Notable is the enormous amount of on-tap power and torque punctuated by the smooth-shifting 10-speed automatic. The new transmission sorts out the best gear for the job by moving seamlessly up or down, skipping one or two gears if necessary. The truck’s steering is linear and brakes scrub speed smoothly. Our drives included pavement and an off-road course, where the truck performed well, maintaining traction over slick and muddy surfaces. We appreciated the 360-degree camera while navigating through the tight and twisty woodland trails. 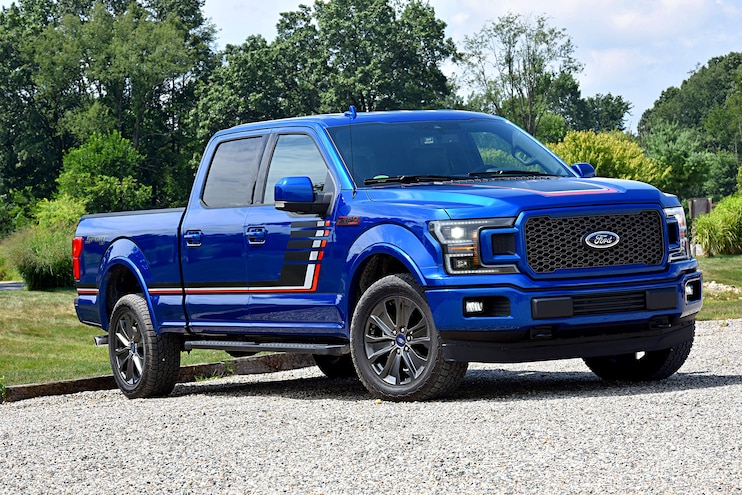 View Photo Gallery | 103 Photos
Photo 3/103   |   2018 Ford F150 First Drive
An adaptive cruise-control system with stop-and-go is a segment first, giving the F-150 an exclusive offering over its competition. Ford says the system has been designed for truck duty, enabling owners to use cruise control even while towing. Available driver assist and convenience features include Ford's Pro Trailer Backup Assist, blind-spot monitoring that can even watch the spaces on either side of a 33-foot trailer, a 360-degree camera that helps improve confidence when parking and can help reduce stress when connecting a trailer, and a lane-keeping system that actively prevents accidental lane departure.
With 40 years of pickup leadership and a bright-red, aluminum-shaped target painted on its back by other pickup manufacturers, Ford could have been careful in refreshing its F-150 1/2-ton truck. Instead, 2018 brought a long list of new technologies that make truck ownership easier and more convenient than ever. And thanks to segment-leading performance, engine output, towing, and payload numbers, don’t expect the 2018 F-150 to give into its competitors without a fight. Our experiences suggest it’s a fine truck, and we can’t wait to try one out for a longer, more comprehensive test.