A Clear Direction to the Old-School 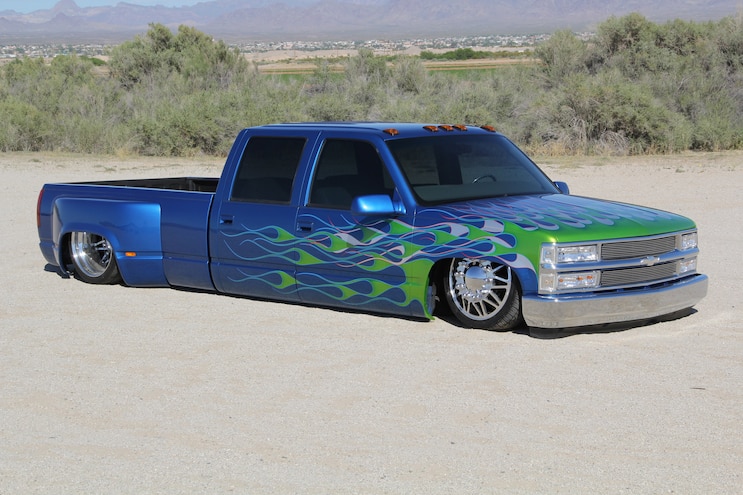 Being involved in the custom vehicle industry for two decades can teach someone a whole big bag of tricks. Building a truck that looks spectacular, but only functions as a showpiece, versus creating a streetable custom are two very different mindsets. Joey Isabella of Yuma, Arizona, had been around and been involved in just about every type of build. When it came time for his ’96 Chevy 3500 dualie to go under the knife, he had a very clear direction that he wanted to go in. 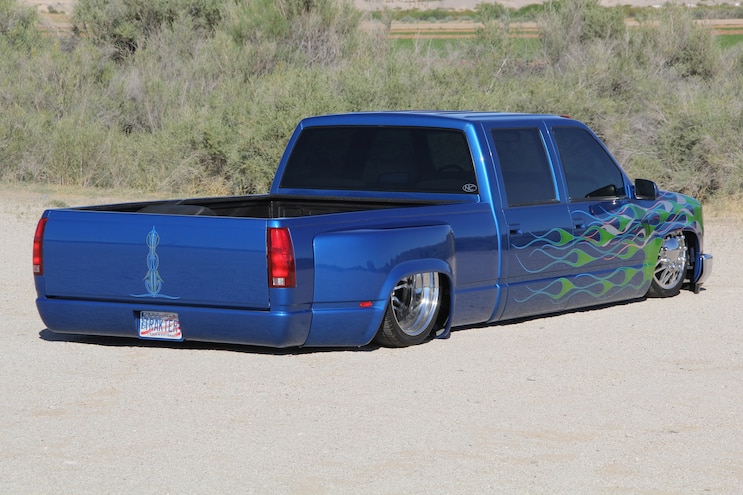 View Photo Gallery | 11 Photos
Photo 2/11   |   1996 Chevrolet 3500 Dualie Rear
Joey wanted a custom truck that would stand out, but he also wanted one that would stand up to driving around with his family. As a member of Negative Camber and a custom-truck enthusiast for the past 20 years, he knew what worked and what didn’t. He loved the long lines of the GMT 400 dualie and wanted one that paid homage to the heyday of hot-rodding through a flamed paintjob. He also wanted to relive part of his mini-truck past. However, he was more than 6 feet tall, with a wife and son, all of which put a traditional single-cabbed mini out of the question. Plus, Joey can satisfy his love of single cabs with his wife Jessica’s ’66 C10. It had all the room of a full-size but was also ’bagged and lays flat on the ground.
The suspension and frame mods were built to get the dualie way low to the ground, but in a rock-solid manner. Joey had purchased the truck in Long Beach, California, and originally, just wanted something lowered with a four-link that could handle towing. Old habits being what they are, the dualie was destined for bigger things. An AccuAir system, including a touchpad, valves, and lines, two Viair compressors, and two 3-gallon tanks, along with Firestone 2,800 ’bags front and rear handle the ups and downs. Narrowed A-arms were teamed up with Belltech 2-inch spindles, while the rear was built with a step notch, and massive Heims on the four-link. Joey and Little D from Chappelle's Body Shop in El Cajon handled the body drop that took the dualie all the way to the pavement. The traditional, almost textbook way, this dualie was dropped ensured it was sturdy enough to handle regular use, as well as looking cool enough to stand out at shows and winning an award or two. 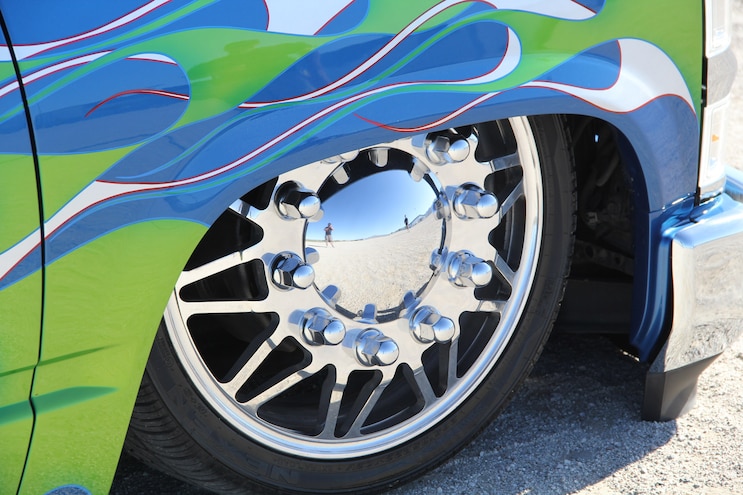 View Photo Gallery | 11 Photos
Photo 3/11   |   1996 Chevrolet 3500 Dualie Wheel
The stock 454 was left alone aside from some engine bay cleanup with a pressure washer to get the 21 years of road grime off. Again, the idea was to not push the envelope and create problems. The factory cooling system kicks on when needed, the A/C still blows cold, the alternator kicks out enough electricity, and Joey can be confident it will do so mile after mile. Teamed up with a stock, but serviced, transmission, all that was added to the drivetrain was a narrowed 8-inch rear end that allowed the 22x8 custom-cut Peterbuilt-style wheels with a quartet of 265/35R22 Nexen tires to tuck easily with no chance of rubbing.
Tradition was again tapped for the exterior with shaved tailgate, third brake light, and shaved antenna. The dualie fenders were lifted 2 inches to keep the proportions correct. While the stock front bumper was kept, the rear was deleted and a rollpan added, with all body work coming from Chappelle’s. The popping blue paint and perfectly laid flames were done by none other than Pete Finlan from Hot Dog Kustoms, in Temecula, California. If you don’t know who that is, just look him up. A base of Toyota Blazing Blue Pearl was doctored by Pete, while the flames are all PPG with a little paint master trickery mixed in for that Hot Dog touch. 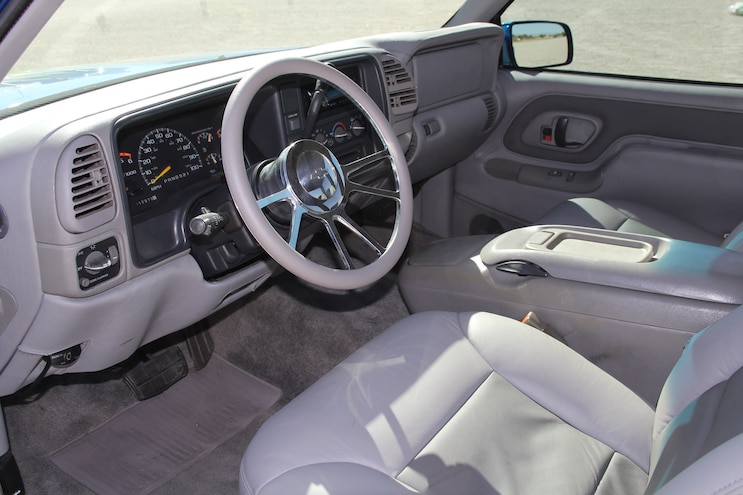 View Photo Gallery | 11 Photos
Photo 4/11   |   1996 Chevrolet 3500 Dualie Interior
Inside is completely custom, but laid in such a way that it all still seems stock or stock-ish. The body drop was covered up with factory gray carpet, the front buckets and rear bench were re-covered with two-tone gray leather all by C&M Upholstery in Queen Creek, Arizona. The sound system was replaced with an Alpine headunit and 5 1/2-inch components in the doors, two 4x9s in the C-pillar, and to 10-inch subs under the rear bench. It all is in keeping with the somewhat factory look, as it’s all integrated and hidden the best it can be.
After a whole slew of custom builds Joey had been involved in, he knew this one would stay around. It not only had a personal touch to it, but it had been built to be a brickhouse on wheels that can be stepped into, fired up, and ran for a good long while without worries. 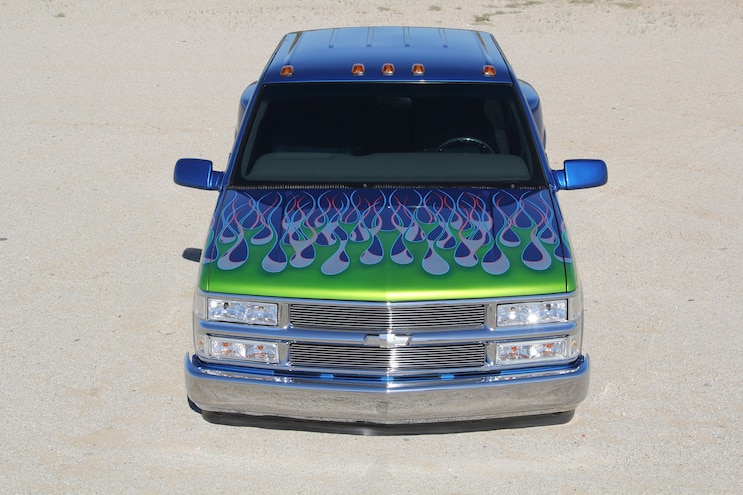