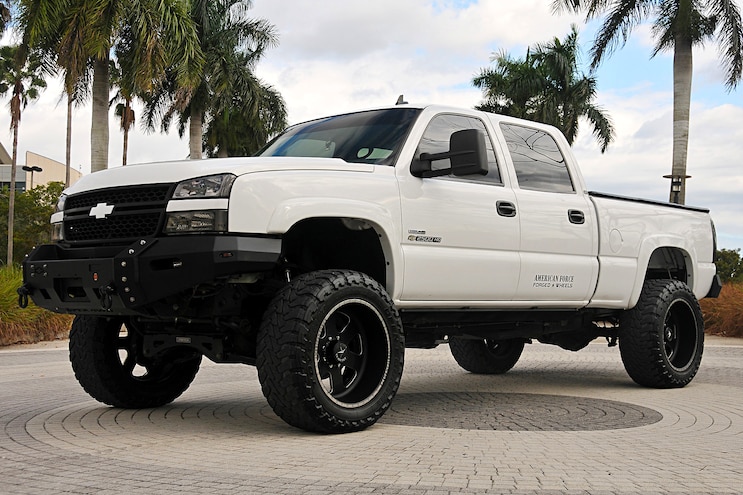 We’ve all heard stories of lending something to somebody only to have it lost or broken. Well what happened to twenty-one year-old Frankie Alonso Jr. from Miami, Florida, happened on a much larger scale. Frankie’s father needed to tow a 36-foot contender fishing boat and needed something strong to trailer the heavy load. Frankie came to the aid of his father and lent him his ’80 Harley truck to help him. During the towing process, the unexpected happened when the Harley motor seized up. Frankie was devastated that his daily vehicle was now out of commission but he kept telling himself to relax.
As a show of good faith, Frankie’s father helped him with the purchase of a low mileage 2007 Chevy Silverado 2500 HD diesel truck. As the owner of Rastro74, a used auto part store for jeeps and 4x4 trucks in South Florida, he had the right resources to make his new truck unique. His first step was improving the performance of the Chevy by using an EFI Live tune in and installing a K&N intake which was added by Idahoe Rob. Frankie got down and dirty installing a four-inch MBRP full exhaust from front to back. A Sinister diesel complete EGR delete which is designed to remove exhaust throwback.
Frankie decided to test his knowledge and experience by adding a 6-inch Fabtech lift kit using Fox shocks in the rear, and a G2 differential cover was added to the rear. Because Frankie needed to use his new rig to tow, he decided to upgrade the steering by adding a Kryptonite stage 3 package which has a Kryptonite center link, a Moog idler and Pitman arm. All brackets were reinforced. A set of 22x12 American Force Judge SS were wrapped in 37x13.50x22 Toyo MTS rubber and added to the newly lifted Chevy. A set of Leslie P5 train horns were mounted with two Viair compressors to make sure the paths are cleared in front of Frankie. Amp Research steps were added for easier access into and out of the lifted Chevy. 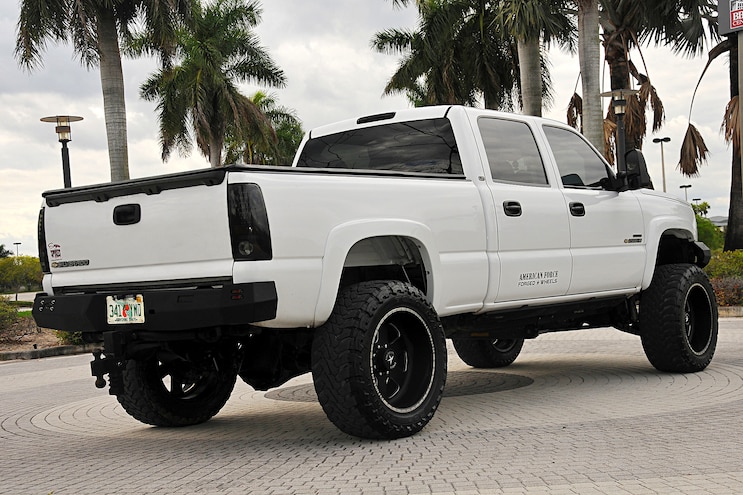 View Photo Gallery | 73 Photos
Photo 2/73   |   031 2007 Chavy Silverado 2500hd White Duramax
Frankie wanted to add a full custom stereo to his truck but was lacking room behind the rear seats. He did what any determined stereo junkie would do, he removed the rear seats and added the front seats from a 2005 Chevy Tahoe to the rear to give him the perfect amount of space for his stereo plans. Pro Audio Sound in Miami began the stereo install and started modestly with a Kenwood Dnx9980 head unit. The install exploded with Mmats components scattered throughout the factory locations including custom high end speakers powered by a Mmats 3,000 watt amplifier. A 2000 watt Mmats amplifier power the two 12-inch Kicker L7 subwoofers built in a custom enclosure between the rear seats.
Frankie wishes to thank his father for helping with the truck and many thanks to the crew at Pro Audio Sound for the clean install and American Force wheels for all the help. Frankie wishes to also thank his two cousins Alex and Elan Rafi who played a big role in supporting his build. His mom Yamila’s company also helped sponsor the build of his Chevy. It took a heartbreak to catapult Frankie into making a one of a kind build that he can be proud of. Whenever adversity hit, Frankie gave the perfect example of how to relax, don’t do it.