Built With a Side of Intimidation 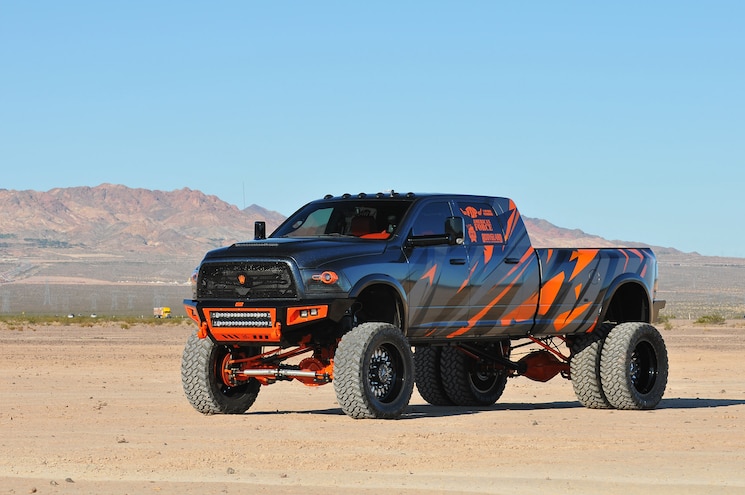 Pumpkin spice is one of those things that you either love or hate. When fall comes around each year, pumpkin spice everything starts hitting the menus before a single leaf starts to turn. Andrew Ybarra of Odessa, Texas, named his massive Dodge Ram that because he seems to get people that either love the effort and work on his truck or just don’t get it. In high school, Andrew first got introduced to the culture as he watched his schoolmates driving around in lifted trucks. He knew that wasn’t in his budget but he loved looking at them. He knew that one day he would be able to afford this lavish luxury and he would create something so unique that it would stand out among the rest. 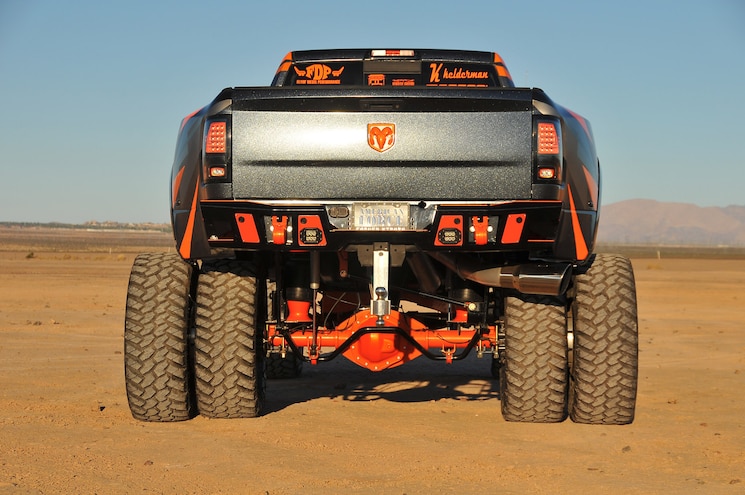 View Photo Gallery | 17 Photos
Photo 2/17   |   2014 Dodge Ram 3500 Pumpkin Spice Rear
Andrew continued to work hard and landed a great paying job in the oil fields in Texas. In 2015, he decided it was his turn to begin his entrance into the truck world. “I found a Dodge with an 8-inch stretch,” Andrew tells Truckin, “most Dodge MegaCabs only come with a 6-inch bed from factory.” He purchased the Longbed and immediately put it to work. He brought the Dodge to Flyin Diesel in Kerrville, Texas where they got down and dirty adding the full Kelderman lift and airride. 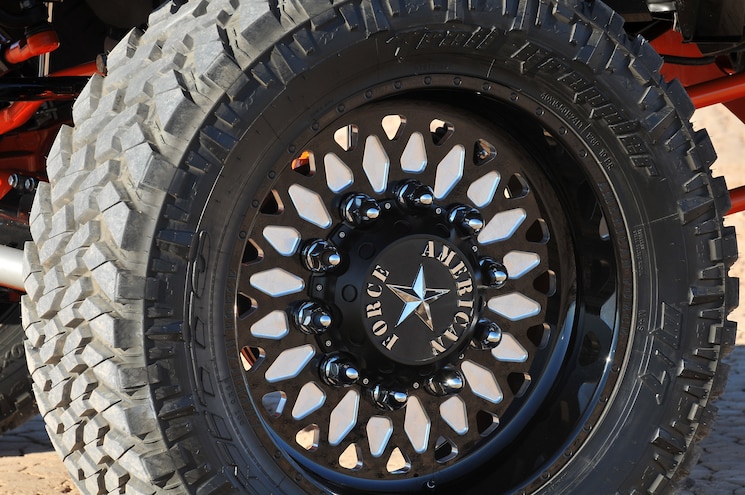 View Photo Gallery | 17 Photos
Photo 3/17   |   2014 Dodge Ram 3500 Pumpkin Spice Wheel
Once the Dodge suspension was altered, the engine got a makeover adding performance parts that would handle the added weight. The front and rear axles were torn down and prepped for powdercoat and then rebuilt and added back to the frame. Andrew brought the Ram to Mobile Toys Inc. in College Station, Texas for some massive audio and interior upgrades. The already immaculate Longhorn interior was gutted and a new pumpkin interior was added.
Once the interior was finished, Flyin Diesel got it back for the exterior lighting and body modifications, including all the front and rear bumpers. Once completed, Andrew took a trip to PGNOLA in New Orleans for a custom wrap that he and friend Michael Trinchini designed together. Andrew chose the New Orleans based company because the year before they had won Wrap King of the World at the SEMA show in Las Vegas. The next step was linking up with Nick Chin and his crew at American Force Wheels where the large Dodge was fitted with their Realm wheels. 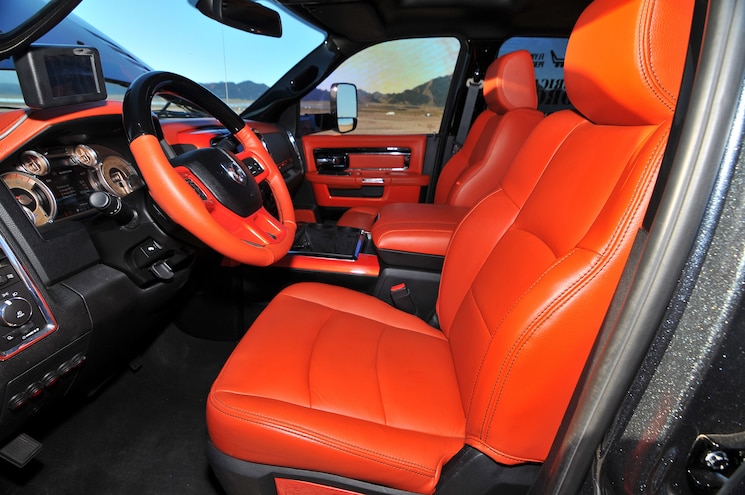 View Photo Gallery | 17 Photos
Photo 4/17   |   2014 Dodge Ram 3500 Pumpkin Spice Interior
Andrew fulfilled his childhood dream of creating something that would stand out in the already saturated lifted truck market and stand alone. He wishes to thank his beautiful wife Jessica and his three little boys Xavier, Jaxson and Maddox for all their support and patience throughout the process. It’s not often that someone buys a brand-new truck and within a year, guts it and creates a whole new vision. Pumpkin Spice has set a new standard for intimidating its competitors but this version is realized year-round!