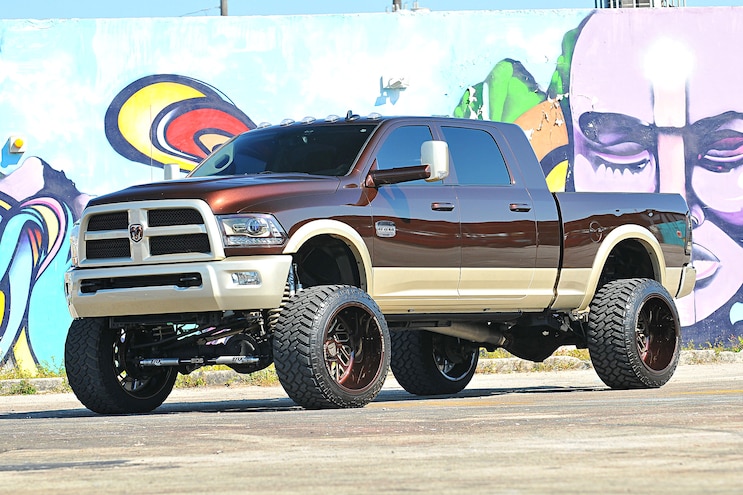 As much as we try to deny it, social media plays a huge role in today’s society. Known as “Mr. Longhorn” on his Instagram page, Julian Montes first realized his truck building passion from the popular social media platform. “I would see all these lifted trucks and I just fell in love, “Julian tells 8 Lug, “I started following all these truck build pages.”
Dodge trucks always took first priority for Julian when it came to looks which led to the choice to buy his first truck, a Dodge dually. The dually was bigger than he thought and after a year, he decided to get something a little smaller. Staying in the Dodge family, he found a 2015 Dodge Ram Longhorn at a dealership in Miami, Florida. One of the shops that Julian found on Instagram was called TPC Customs, located in Lake Worth, Florida. Almost immediately Julian drove the new Dodge to Troy at TPC Customs for the 8-inch lift. 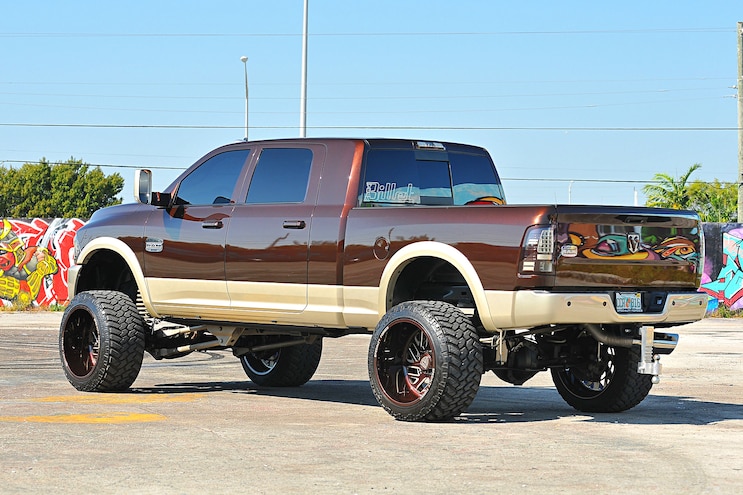 View Photo Gallery | 43 Photos
Photo 2/43   |   009 2015 Ram 2500 Longhorn Laramie
Once the Ram suspension was altered with the BDS lift and Fox shocks, Julian decided to upgrade the front and rear lighting once again by seeing the quality work from Instagram. The front and rear lights were shipped out to RetroShop LLC in Florissant, Missouri. When the lights were shipped back and assembled, Julian’s next mission was finding the perfect wheels that would add style and class to his Dodge Longhorn. Based on reputation, Julian went to Full Spool Performance in Rockledge, Florida where he picked out a set of Specialty Forged wheels and had them color matched to the exact paint as the truck.
Julian wishes to thank everyone who supported him and had a hand in the build of Mr. Longhorn including his mother Mirtala and father Juan, his brother Juanito and sister Yadira as well as close friends Freddie and Vince along with Chase, Jared and the shops that helped him along the way. With close to his own 40,000 followers on his Instagram page, Julian hopes that he could provide a motivational platform for other young kids looking to customize their trucks.
TechSpecs
Year/Make/Model: 2015 Dodge Ram 2500 Longhorn Laramie
Owner: Julian Montes
Hometown: Labelle, Florida
Odometer: 48,900
Engine: 6.7L diesel
Body Mods: brown flake, two-tone light brown, front and rear custom light covers, color matched grille, mirrors and badges
Suspension: 6” BDS lift, 2” spacer front lift, color matched lift, Fox shocks
Wheels: 24x16 Specialty Forged SF015-8 color matched to vehicle
Tires: LT375/40R24 Nitto Trail Grappler