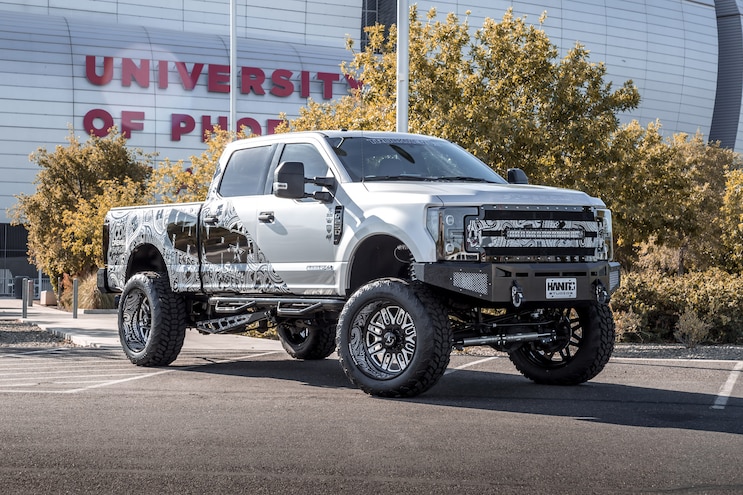 To engrave can be defined as cutting, carving, or chasing text or a design on a hard surface such as metal, stone, glass, plastic, or wood. Its usage in a sentence could sound something like this: the silversmith engraved the ring with the customer’s initials. If someone were to claim to undertake engraving a Super Duty truck and many of its various components, we’d call him crazy, a liar, or a dreamer. If he actually pulled it off successfully, we’d call him Hank the Engraver, and we’d affectionately refer to the engraved Super Duty as Aluminati. 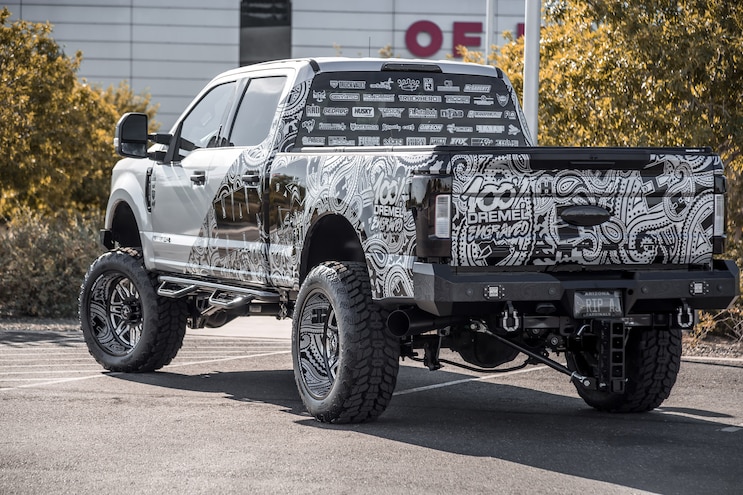 View Photo Gallery | 39 Photos
Photo 2/39   |   2017 Ford F 250 Aluminati Rear
Hank Robinson, owner of Hanro Studios in Avondale, Arizona, really rocked the custom truck scene at the 2016 SEMA Show by engraving a ’16 Ford F-150 named Freedom Blues during show hours. Like a strong magnet, the bzzzz bzzzz bzzzzz of Hank’s Dremel tool working away on Freedom Blues in the outdoor American Force booth attracted a multitude of curious onlookers clad with cell phones. Since we know there’s nothing magnetic about the new F-150s, these spectators were drawn to the live action and literally mesmerized by the concept of engraving a truck. It had to be one of the coolest things the SEMA show has ever seen. His first SEMA truck, though, was a ’14 Ram 1500 named A Warrior’s Chariot, which was displayed at the Velocity Wheel booth. He spent that 2015 show doing engraving demos at K&N Filters and Gibson Exhaust.
After the success of his first two engraved trucks at back-to-back SEMAs, Hank’s at it again for the 2017 show, having actually traded in A Warrior’s Chariot to purchase the new project seen on these pages, a ’17 Ford F-250 named Aluminati. Since the ’17 Super Duty trucks have aluminum panels like the F-150 and Hank had always wanted a diesel truck, the stout Blue Oval is the perfect platform to showcase his engraving. 8-Lug couldn’t cover his ½-ton projects, but when talk of covering Aluminati came up, we jumped on board faster than an iMessage could reply yes, knowing the Hanro truck would be hands-down insane. To adapt the Jerry Maguire “You had me at hello” quote, we’d say, “You had me at Hanro.” 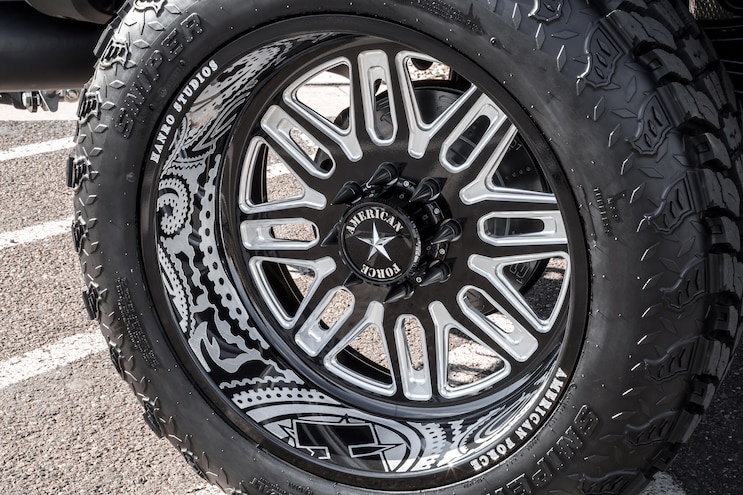 View Photo Gallery | 39 Photos
Photo 3/39   |   2017 Ford F 250 Aluminati Wheel
So what’s the big hubbub about engraving a truck? Simply put—you don’t engrave trucks, you paint or wrap them. You generally engrave smaller items like jewelry, trophies, and trinkets. Bigger projects are not out of reach, of course, but engraving whole trucks in their entirety is just not seen in the custom truck industry. You’re looking at hundreds and hundreds of hours of meticulous work using a Dremel 4000/4300 rotary tool affixed with rotating tips called ball burs, where anything less than a steady hand and pile of skill would result in something that looks more like vandalism than art. There’s a reason Hank is sponsored by Dremel and we’re not. He has invested about 700 hours in the project so far and has used about 250 ball burs.
In addition to engraving the aluminum body panels, Hank also engraved the lift kit and bumpers and finished them with powdercoating for a ghosting effect. This process was actually his favorite part of the build, and he recounts that he “couldn’t be happier with the outcome.” The lift is a McGaughy’s Suspension 8-inch Premium Phase 2 lift kit, with black powdercoating over its engraved surface. Additional engraved aluminum plates on both the traction bars and radius arms give a bright contrast. The front and rear Fusion bumpers were also engraved and then powdercoated, making for a subtly outstanding addition to the custom bumpers. You better believe other custom components received the Hanro Dremel touch: shock reservoirs, speaker panels, wheels, grille insert, and air tank. 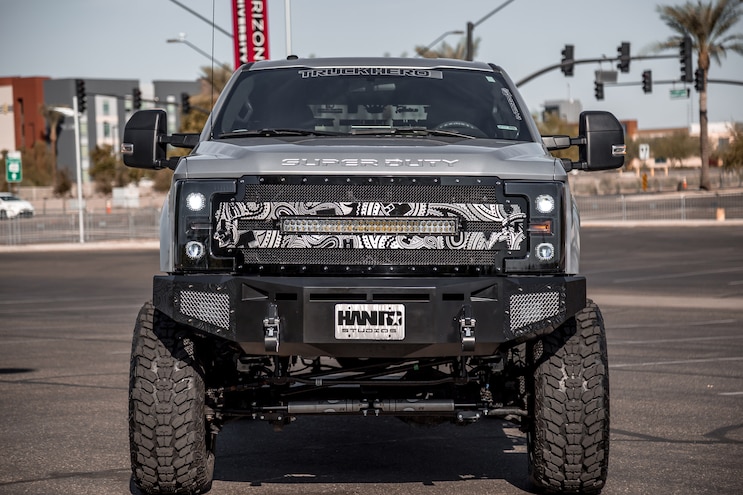 View Photo Gallery | 39 Photos
Photo 4/39   |   2017 Ford F 250 Aluminati Front
Aluminati will spend its time as Hank’s daily driver, working hard as a fully functional mobile engraving station assisting Hank at events, car shows, and vendor shows all over the place. Hank’s most recent masterpiece, which has permanently left its mark on how we view truck customization, reminds us “to not be afraid to take a chance on something different. Go big, push the limits, and create a new normal.”

- OF
By Monica Gonderman
737 Articles