A Tribute To His Brothers In Arms 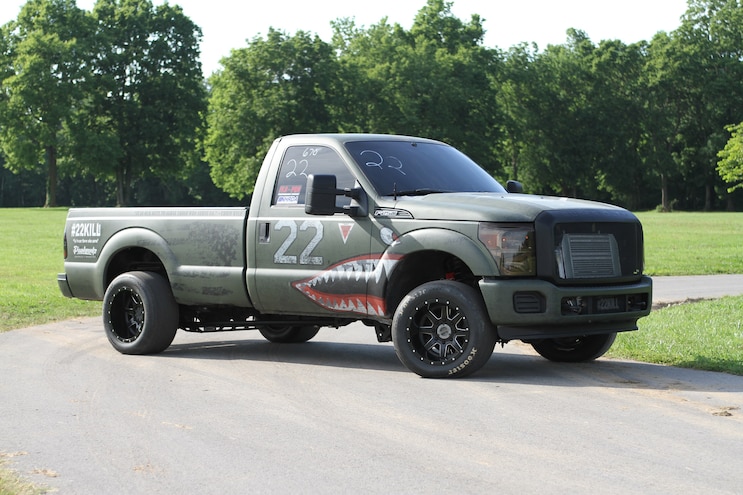 More than shiny paint and body mods, diesel enthusiasts relish big horsepower and incredible performance. We believe those of you reading this are into the diesel scene beyond just the parts, pieces, and big dyno numbers. For us, “diesel” is about the people, too. Dorian Reyna knows that, and he may know it better than anyone reading this article.
As a veteran of the U.S. Marine Corps, a shop owner, and a guy who is still recovering from the devastation wrought by the 2017 flooding in the Houston, Texas, area, Dorian has seen the best and worst in humanity in its most raw forms. And through all of that, not only has he persevered, he’s thrived. The ’12 Ford F-250 featured here is his shop’s hot rod. This rig sucked up loads of time and sweat during the build process, but the result is a functional truck that brings Dorian great joy. The F-250 may run like the wind and look really cool, but its impact and message go far beyond the dyno’s rollers or the dragstrip time slip.
“As a veteran and diesel enthusiast, I really wanted to do a truck that would connect with people,” Dorian says. “The re-creation of the shark-faced nose art that identifies the planes flown in WWII by the ‘Flying Tigers,’ the first U.S. volunteer air group, attracts so many people because it is different and historic. The look breaks the ice and gets people to check the truck out, but the message is what really has an impact—especially with fellow veterans.” 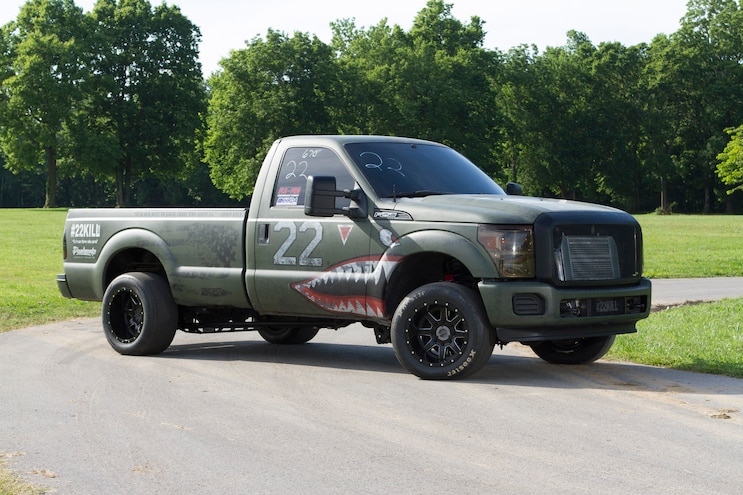 View Photo Gallery | 13 Photos
Photo 2/13   |   With more than 1,100 hp, the classic looks of a WWII fighter plane, and the stance every drag race–loving Diesel Power fan knows, Dorian Reyna’s ’12 Ford F-250 is great. Even greater is the message behind all of it. The truck has become an amazing tool to help vets with psychological issues such as post-traumatic stress disorder and depression.
That message surrounds the big 22 on the side of the rig. Studies show the U.S. loses 22 veterans each day to suicide. It is definitely a shocking and sad number, but it is also a statistic Dorian believes he can help reduce. “Every veteran out there has lost a buddy in this way,” he explains. “Post-traumatic stress disorder and suicide are huge issues for us, and this truck has connected me with so many people who have had amazing conversations about their service and their lives. People open up when they see it, and that’s the biggest reward I’ve received from building it.” 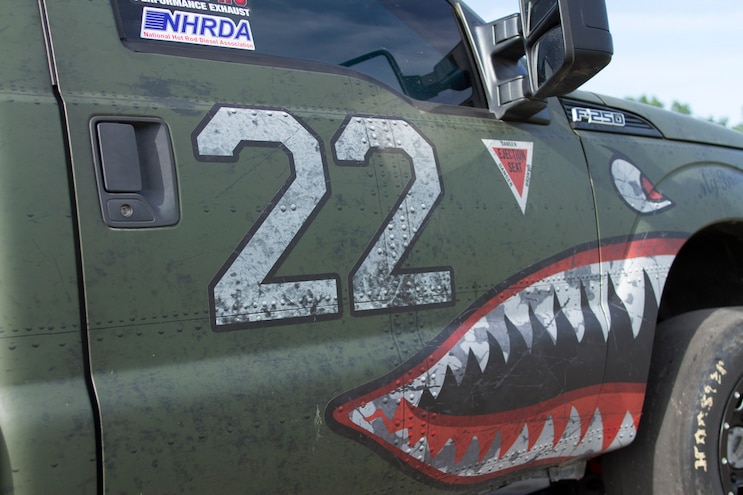 View Photo Gallery | 13 Photos
Photo 3/13   |   The number 22 is displayed on the truck in various places. The U.S. Department of Veterans Affairs reports that 22 vets die every day from suicide. Dorian tells us some of the most moving conversations of his life have come about because of his truck and the way it touches fellow veterans.
Dorian owns and operates Power Stroke Enginuities, a Ford Power Stroke–centric shop in Houston, Texas. As anyone with an active memory can remember, Houston got hit hard by flooding in August 2017, and unfortunately Dorian’s shop was not spared. “It got pretty ugly,” Dorian says. “We had like 5 feet of water in the building, and the night before it got really bad, looters stole a couple of trucks from our yard. After the storm, the support to help us get back on our feet was amazing. A lot of people in the diesel industry and members of the hobby’s huge community came and helped us clean up. Some guys donated computers, gear, parts, tools, and even money to help get our shop back up and running. They didn’t want publicity from it. They just wanted to help from the heart. If you do it for publicity, I think that’s the wrong reason.”
Despite the kick in the backside from Mother Nature, Dorian and his guys at PSE are getting it done, and they are having fun with the F-250. The truck was found online and Dorian needed only one sign-off on his plan. “I found this regular-cab, longbed truck and told my wife I needed to buy it,” he says with a laugh. “She told me to sell one of my other trucks and get it, so I did.” 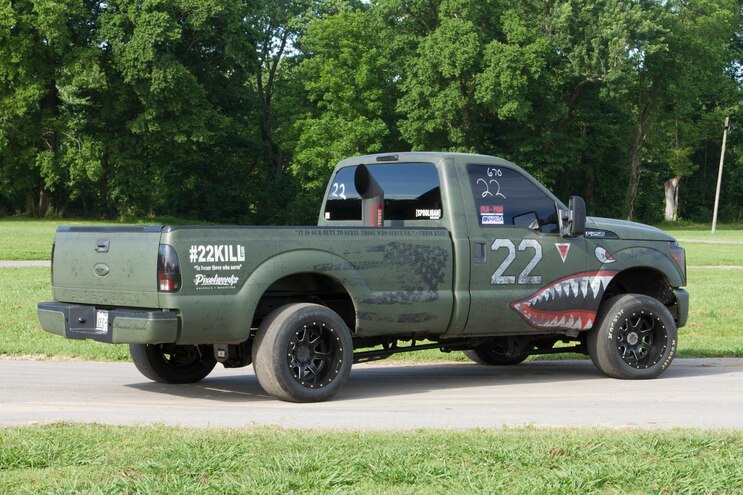 View Photo Gallery | 13 Photos
Photo 4/13   |   We’re sure none of the brave men who flew with the Flying Tigers in WWII could have imagined a pickup truck that has four-digit horsepower and can out-accelerate their airborne hot rods! As a hard-core race truck that still sees street duty, this is one tough-looking rig.
From that time, the truck has evolved from a well-worked stocker into the 1,180hp 6.7L Power Stroke–driven monster you see here. “It started out as a good parts runner and shop truck. We decided to tune it and add the turbocharger kit, and all of a sudden it’s an 1,180hp beast!” Dorian was quick to tell us the fighter plane–themed wrap is his favorite element of the build. “I love the truck’s performance,” he says. “When it comes off the starting line at the dragstrip with the four tires hooked up, you know you are on a great run. But for me, the coolest thing is the wrap. It’s just so different and attracts so much attention to the truck that I can’t help calling it my favorite part.” 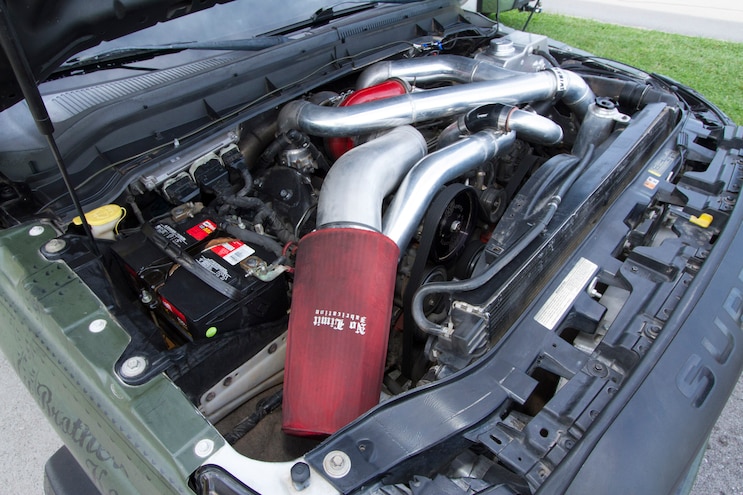 View Photo Gallery | 13 Photos
Photo 5/13   |   As cool as the wrap is and as well as the suspension works, the real story is right here: a 6.7L Ford Power Stroke diesel V-8 engine that makes 1,180 hp (with a towing tune). The Engineered Diesel–prepared BorgWarner S475 turbocharger is the centerpiece of this plumbing maze. 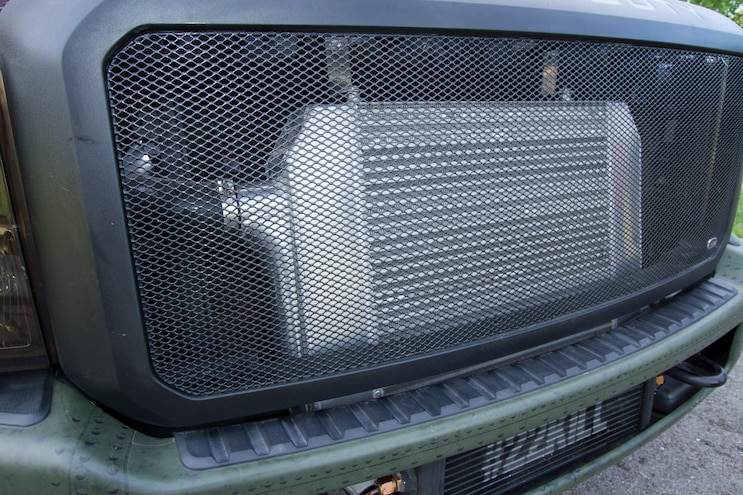 View Photo Gallery | 13 Photos
Photo 6/13   |   The mesh grille is one of our favorite styling elements of the truck. The mondo air-to-air intercooler living right behind it really stands out. The massive size of that grille opening is very apparent when you see it for the first time, and the big intercooler appears to be hovering inside it. 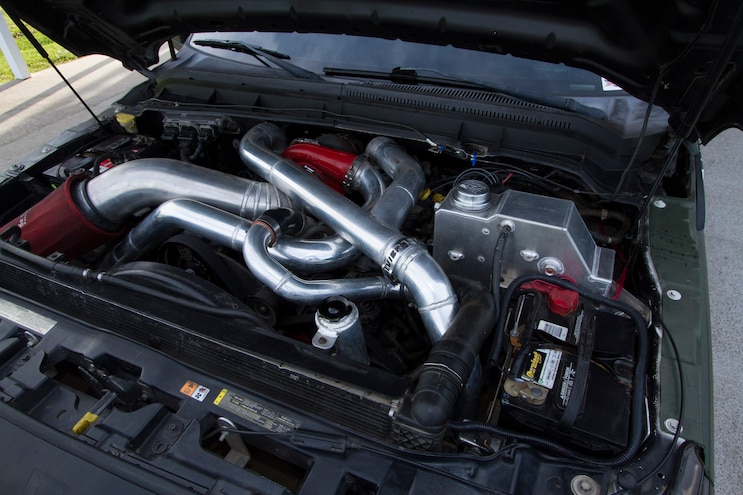 View Photo Gallery | 13 Photos
Photo 7/13   |   As stripped as the interior is, it’s ironic that just a firewall away there is an engine bay that’s stuffed so full that it appears ready to burst at the seams. Speedlab Creations gets the credit for executing all the beautiful fabrication work under the hood.
While visions of huge money and exotic parts may be dancing in your head, we can promise you that is not the case with this truck. In fact, the amount of original parts that still hold this package together is pretty surprising. There’s a stock transfer case, driveshafts, and axles anchoring this rig. The transmission was the first thing to bite the dust when power levels got extreme, and the guys had Midwest Competition Diesel build a 6R140 TorqShift six-speed automatic to handle the abuse. The engine is a study in matching the right parts—not the most exotic—to make the most power. We really dig the F-250’s semi-freaky dual fuel systems, comprised of a very interesting collection of parts.
Much like the U.S. Marine Corps in which Dorian proudly served, this truck is far stronger as a whole than it is as individual parts. The message the truck conveys is, too. When veterans are suffering with depression or PTSD and contemplating suicide, groups of people coming together to help them get through the tough time are just as effective as the combination of parts that get this rig down the road. 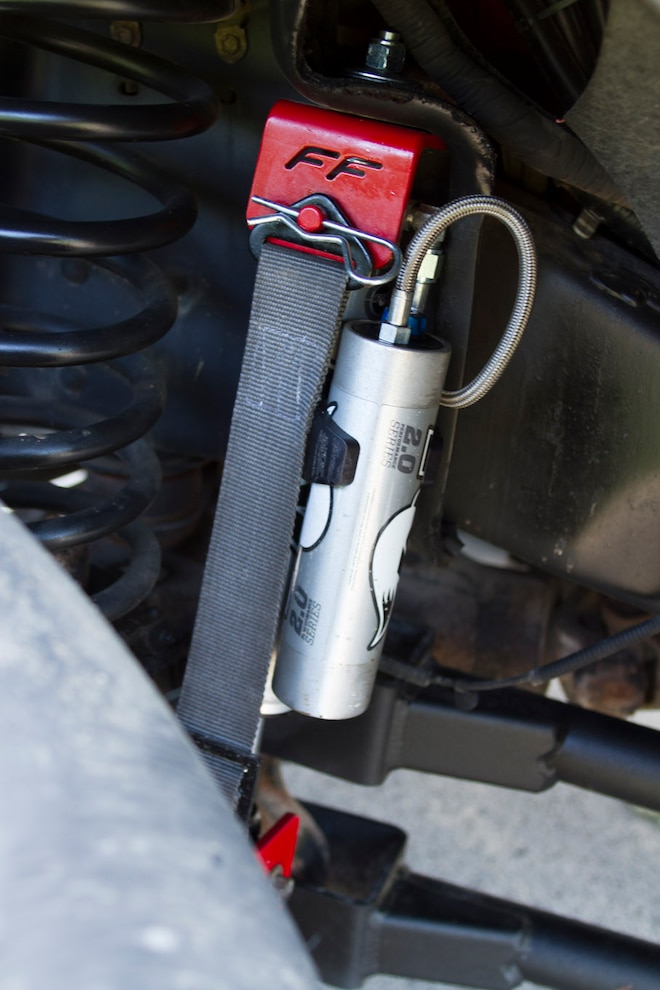 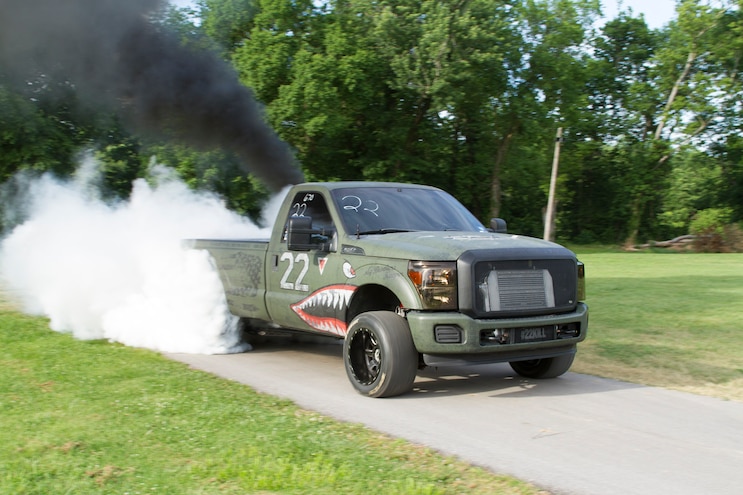 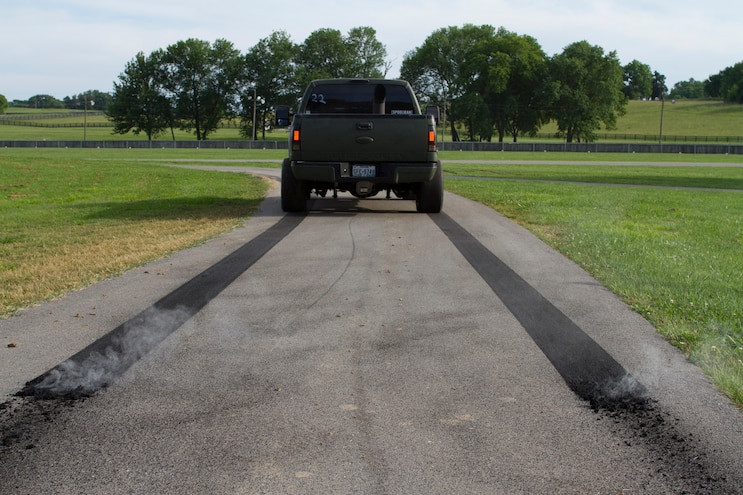 View Photo Gallery | 13 Photos
Photo 10/13   |   If you dig hot-rod pickups like we do, you’ll agree there are few sights more beautiful than this one. The big Hoosier 325/45 18 drag radials definitely have a wide contact patch, and the locker in the rear axle works like a champ! 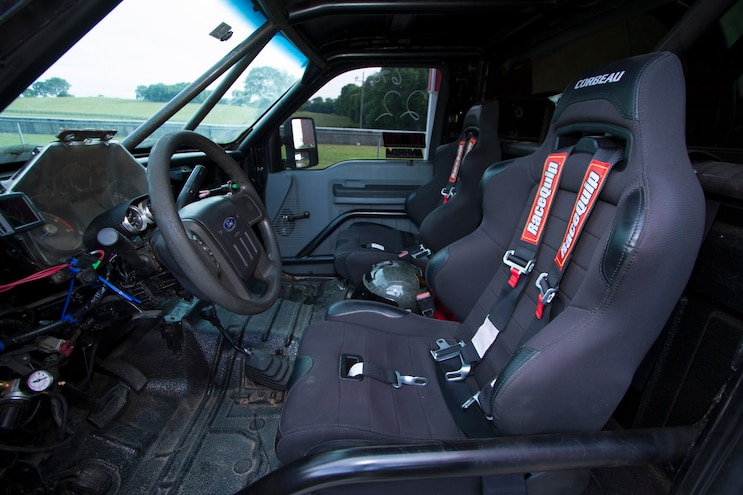 View Photo Gallery | 13 Photos
Photo 11/13   |   Comfort is exchanged for lighter weight, as the cab is completely stripped. A pair of Corbeau race seats and a four-point rollbar keep Dorian and whoever he wants to scare in the passenger seat safe. But, as you see in this photo, every nonessential bit from the cab has been scrapped. 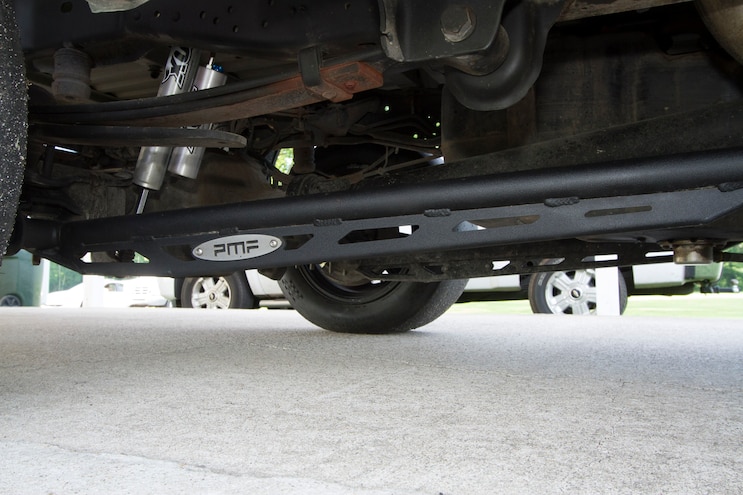 View Photo Gallery | 13 Photos
Photo 12/13   |   Precision Metal Fabrication components are used in the suspension front and rear. These traction bars help the truck hook up on the dragstrip by using the axle’s propensity to rotate and converting it into downward pressure. 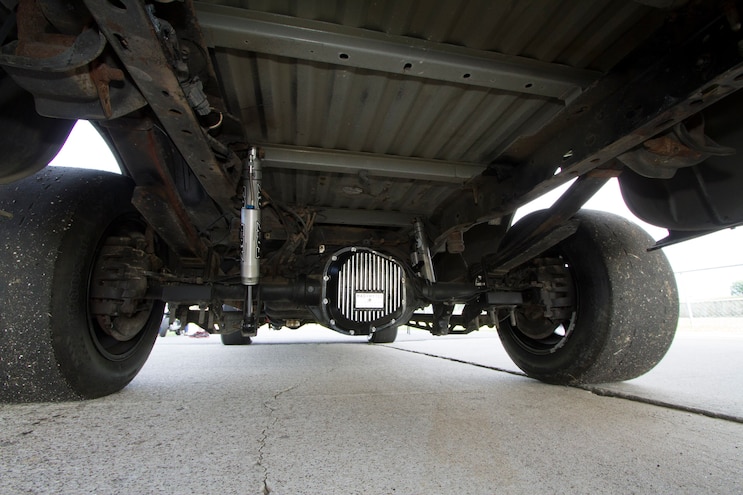 View Photo Gallery | 13 Photos
Photo 13/13   |   The stock axles and transfer case still get the power to the ground despite having hundreds of thousands of miles on them and being hit with nearly 200 percent more power than Ford ever imagined they would endure. It is an amazing testament to the strength of the stock pieces.