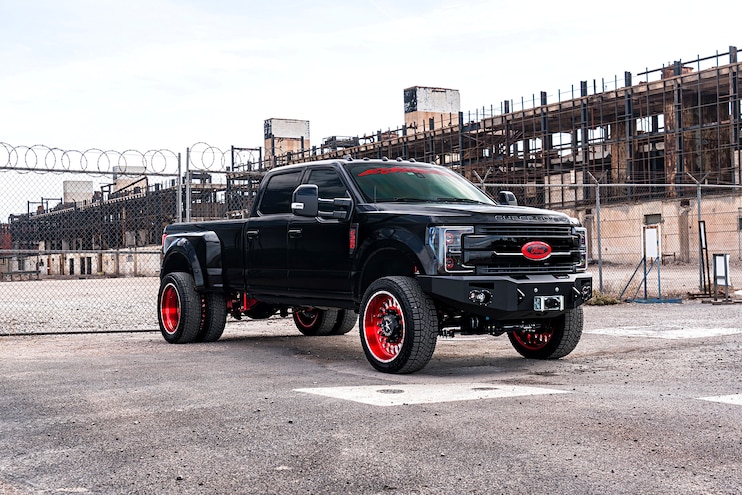 We like big trucks and we cannot lie. Austin O’Krinsky, one of the owners of Extreme Offroad and Performance, Inc., cranks out some insane big truck builds worthy of shows such as the huge, invite-only SEMA show held in Las Vegas every year, the show that many companies build to show off just what they’re capable of. Once SEMA is over, it’s time to start on the next project for the upcoming year.
When Austin and his team got their hands on this brand new ‘17 Ford F-350 complete with the massive 6.7-liter Powerstroke tucked inside the bay, the main intention was for it to tow 40-foot trailers all over the country carrying show trucks. “My favorite thing about the truck is its smooth ride while towing heavy weight with ease,” Austin tells us. 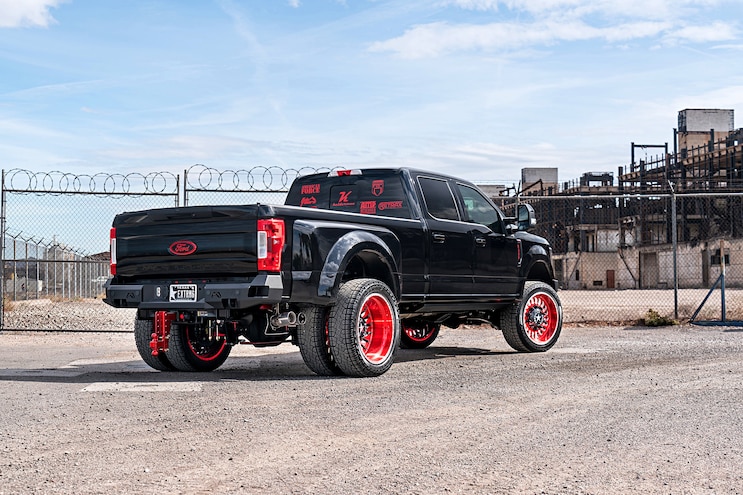 View Photo Gallery | 25 Photos
Photo 2/25   |   Extreme Offroads 2017 Ford Super Duty Dually Rear
In the auto industry, keeping any vehicle stock is basically unheard of. It wasn’t long before this F-350 Super Duty was given a lift with the help of a Kelderman 2.5-inch air ride suspension.
Exterior-wise, this massive truck was given an incredible custom paint job complete with red trim and accents. To really set off the exterior, 24-inch American Force Spec Super Dually wheels were painted red and wrapped with Pirelli Scorpion ATR rubber (325/45/24). 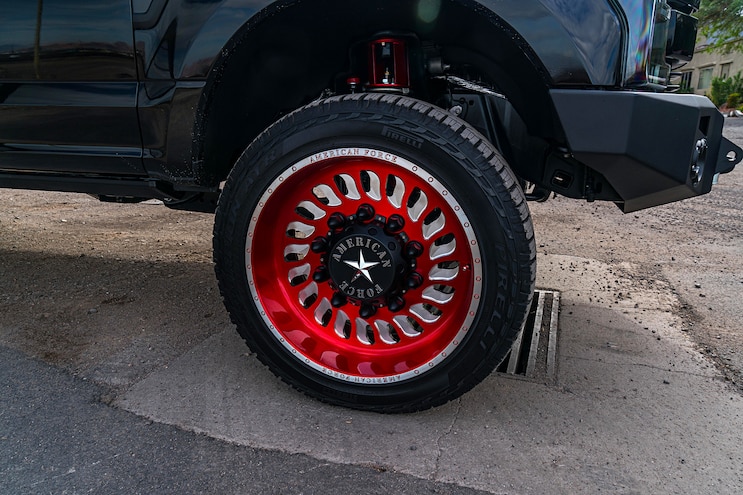 View Photo Gallery | 25 Photos
Photo 3/25   |   Extreme Offroads 2017 Ford Super Duty Dually Wheel
Of course, there was no stopping there. This Ford F-350 was given the Fab Four treatment with premium front and rear bumpers. The exterior was further complimented with Plain an Simple custom headlights, smoked taillights, Rigid LED light bars, Retrax cover, AMP Research side steps, a Warn winch, and Monster hooks. No build is complete without an audio system to crank up the tunes, so that part of the build is provided by a complete Kicker sound system.
Inspiration behind the truck was to become a matching build to the shop’s new 2017 Super Duty, so they could have the best of both worlds! While the automotive industry is constantly evolving, Austin mentioned that it was a learning experience to build on the new body style.
While this Ford F-350 Super Duty was mostly used to tow other trucks to the show, after towing duties were done, this truck was settled in at Kelderman’s booth for last year’s SEMA show.
Located in Katy, Texas, Extreme Offroad and Performance, Inc., have been serving the Katy and Houston areas since late 2007. With at least a decade under his belt with this shop alone, it is more than safe to say that Austin and his team can build one mean machine no matter what the make and model is, old or new. 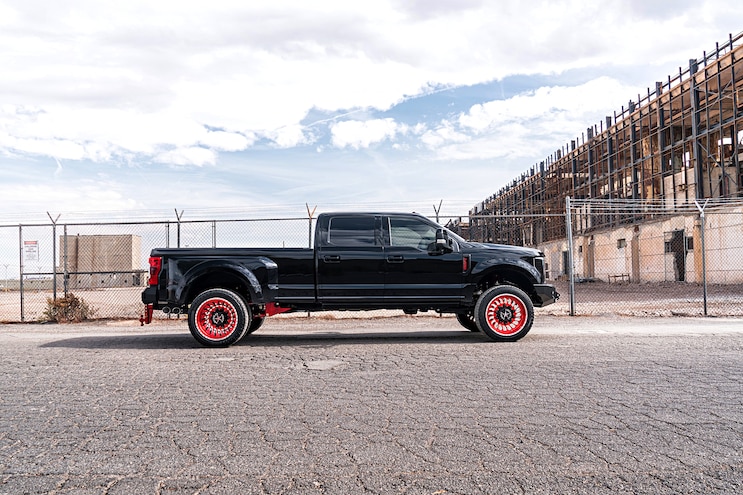 View Photo Gallery | 25 Photos
Photo 4/25   |   Extreme Offroads 2017 Ford Super Duty Dually Side View
“I’ve always had a passion for this as a kid, and I found a way to turn it into a business,” Austin tells us.
As any company should, Extreme Offroad and Performance takes pride in offering an array of services for any build with exceptional customer service. Feel free to hit them up for help on that next project.

- OF
By Amie Williams
2 Articles