When You’re Known By What You Drive 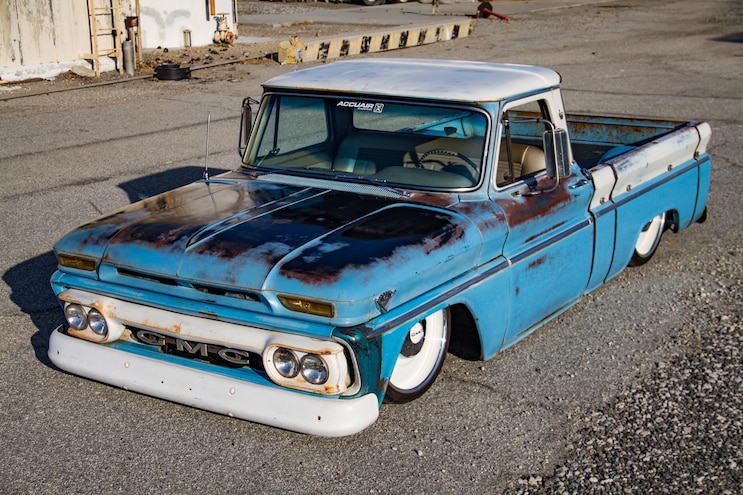 The popularity of ’60s and ’70s GM trucks at shows has soared in recent years, and so has the prominence of patina on these and other trucks. This style of leaving the original paint intact and preserving it in that condition with layers of clearcoat can be found at any car show around the country. Carlos Escoto’s’65 GMC custom pickup is a perfect example.
Carlos remembers a conversation with his close friend Del about how the GMC trucks are “just cooler, and we should build it.” So, that’s just what they did. This truck was taken over to Delmo’s Speed & Kustom with the intention to lay it out, modernize some aspects, but stick with mostly OEM parts on the build. During the build process, Del told Carlos, “When we finish the truck, everyone will know you as if you’re the mayor of the city.” 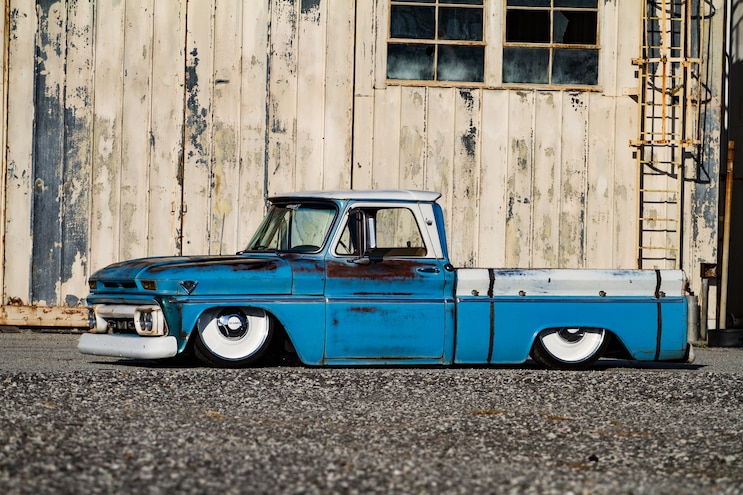 View Photo Gallery | 12 Photos
Photo 2/12   |   1965 GMC Custom The Mayor Side
The ’65 was taken apart and anything that wasn’t being used was tossed aside. The crew at Delmo’s started a full Porterbuilt chassis treatment with their dropmember C-notch and four-link to bring the GMC all the way down to the pavement as well as support the kind of powerplant that was planned for this ride. An airbag suspension was installed with Accuair e-Level for control. The frame is also home to CPP drilled brake rotors and spindles. The entire chassis was powdercoated black. Delmo’s also bolted up a set of 22x8.5 Delmo Special Wheels with 255/30R22 rubber.
In order to give Carlos’ truck some serious power and that modern touch to bring it into this century, a 6.0L V-8 from an ’07 Chevy was dropped between the framerails with a 4L60E heavy-duty transmission. Additionally, the engine received Holley EFI direct injectors, a throttle body, and Delmo’s old-school-style valve covers. The engine was built at Delmo’s and tuned by Jason Bowman of Big 10 Garage. 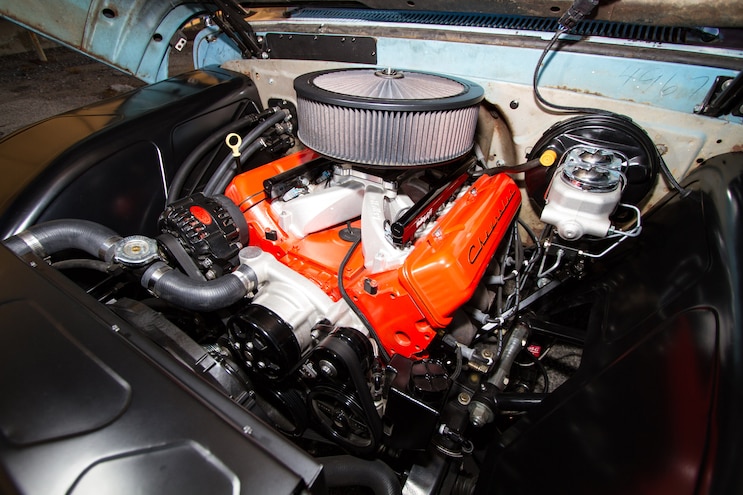 View Photo Gallery | 12 Photos
Photo 3/12   |   1965 GMC Custom The Mayor Engine
When the time came to put the cab and bed back on the chassis, Carlos tasked Empire Fabrication with turning his factory longbed into a shortbed without using any body filler, which would void the overall patina look. The GMC now has a couple more lines of character on each side and a nice, clean shortened bed. Inside the rear quarter panels, the guys at Delmo’s modified the wheeltubs to fit nicely with the raised wood bed floor. Other bodywork was performed by Nick from Hubcaps Hotrod and Custom.
Moving inside The Mayor, you’ll find mostly stock looking interior parts that were cleaned up to amazing condition for a truck that is more than 50 years old. The upholstery was redone by Fat Lucky’s, including new carpet and a very cool bench seat covered in houndstooth fabric. 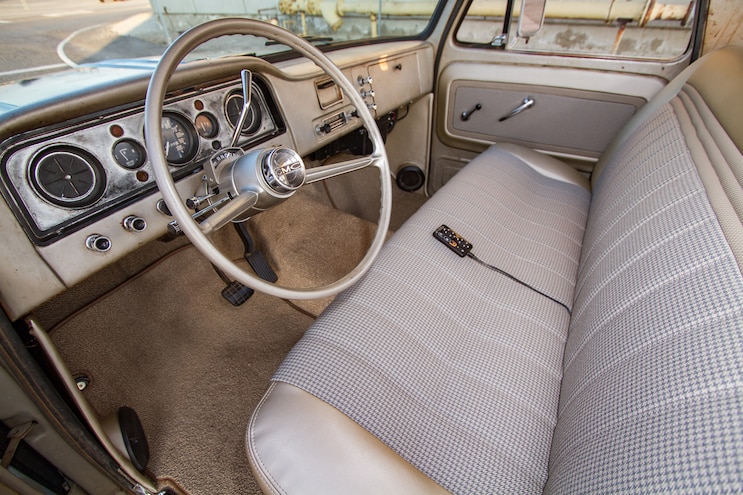 View Photo Gallery | 12 Photos
Photo 4/12   |   1965 GMC Custom The Mayor Interior
As a sign of respect for the work done by Delmo’s, Carlos asked each member of the crew to scrawl their signature on his frame. Just in case the personalized license plates weren’t enough to brand his ’65 GMC with its given name, Carlos has a really cool custom-engraved gas cap emblazoned with The Mayor in the factory location right behind the driver door. There is no doubt now in his mind that The Mayor was the perfect name for this build. “Now more people know me because of my truck than from anything else,” he says.