Drop Some Zeros & Build with a Hero 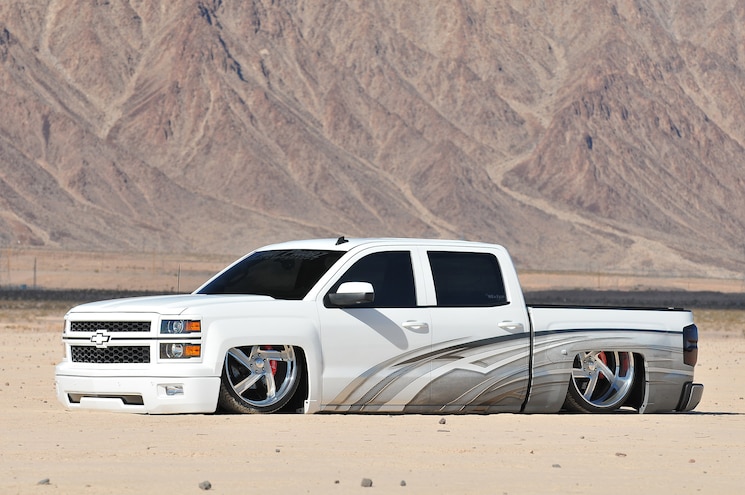 One of the core successful characteristics of a man is loyalty. And it’s truly hard to find someone with more loyalty than Sean Randall of Mobile, Alabama. If Sean tells you he will do something, nothing will stop him from fulfilling his word. At 10 years old, he came across Lowrider magazine. He had never seen a custom automobile in his small town, so this was something out of the ordinary. That interest led to him building model cars and, when he turned 16, his father bought him a ’92 Isuzu longbed mini-truck.
“It was the ugliest thing I had ever seen,” Sean tells Truckin, “but it was all mine.” As a teenager with a new vehicle, it took Sean a full three months before he totaled the Isuzu truck. His next purchase was a brand-new Nissan Hardbody, which he decided to customize. With the help of his two best friends, Ken Bowles and Robert Simmons, it was brought to the ground and ready to ride. Once Sean met his wife Kristen, he took a break from custom vehicles while they had their first son, Chandler. 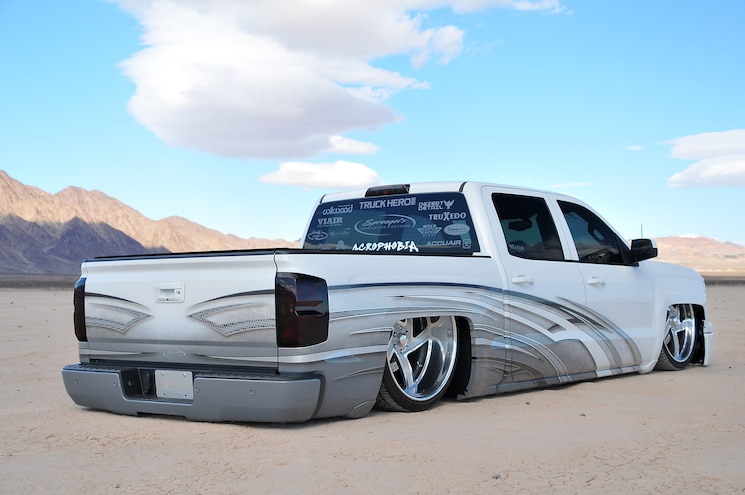 View Photo Gallery | 18 Photos
Photo 2/18   |   2015 Chevrolet Silverado 1500 Vanilla Ice Rear
With a new family, Sean purchased an ’08 Chevy Crew Cab dualie and began researching a place to bag and body drop it. He came across Jake McKiddie at Phat Phabz in Choctaw, Oklahoma, and immediately got a great vibe from him. He guaranteed he would have him complete his dualie. First, Sean had to find a daily truck to transport his dualie to and from shows, so he began searching for a solid truck.
He found a ’15 Chevrolet Silverado 1500 LTZ at a dealership in Theodore, Alabama, and immediately chose it for his daily. The following month was the annual Lone Star Throwdown show in Conroe, Texas, and Sean made the trip. At the show, he saw a body-dropped version of the very same style truck he just purchased—and fell in love with the way it was laid out. He got Jake at Phat Phabz on the phone and changed his plans. He told Jake he wanted his new daily ’bagged and ’bodied instead of the dualie. He transported the new daily to Oklahoma, where master builders Jake and Kyle Dimetroff worked endlessly cutting and bringing the body to the ground. Initially, Sean agreed to only a three-quarter frame, but once Jake got his hands dirty, he wasted no time in making it the first full-frame ’15. 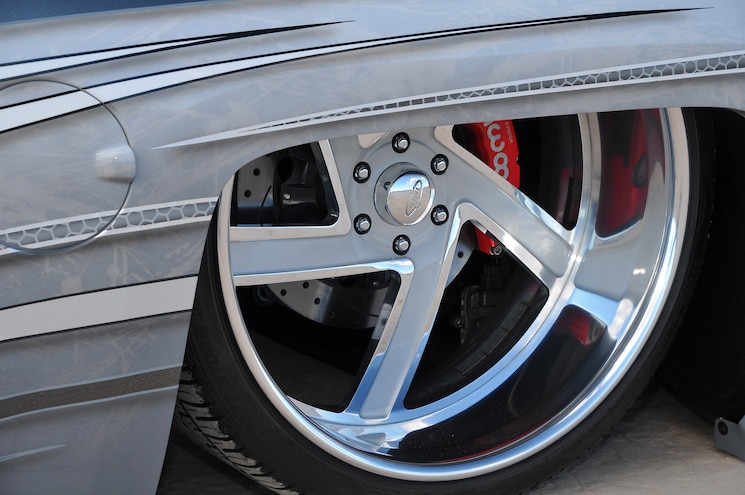 View Photo Gallery | 18 Photos
Photo 3/18   |   2015 Chevrolet Silverado 1500 Vanilla Ice Wheel
Sean attended the SEMA show the year before buying his 1500 and came across Boomer’s Automotive Interiors, which happened to be located in the same city in which Sean lived. He chatted with him and again got a good vibe and told Boomer he would go to him for his next upholstery job. True to his standard of loyalty, Sean enlisted Boomer to handle the entire cabin overhaul using Alea leather and suede.
The last step of Sean’s full custom build came by way of paint. He had been looking around for someone talented and skilled enough to bring his masterpiece to the next level. His good friend Craig Rowley, who runs Battle in Bama, had gone to custom painter Jason Sprengel at Sprengel’s Innovative Kustoms in Illinois and had very good things to say about him. Sean contacted Jason, and the Chevy was shipped to his shop.
The next 30 days were key, because Sean planned on debuting the truck with new paint at the SEMA 2017 show. The Chevy was stripped down, painted, and put back together in 30 days flat, and Sean picked it up using Craig Rowley’s trailer on the way to SEMA. “Although I didn’t get a good view as it was being loaded into the trailer,” Sean adds, “I was thoroughly impressed when I unloaded the truck in Vegas.” 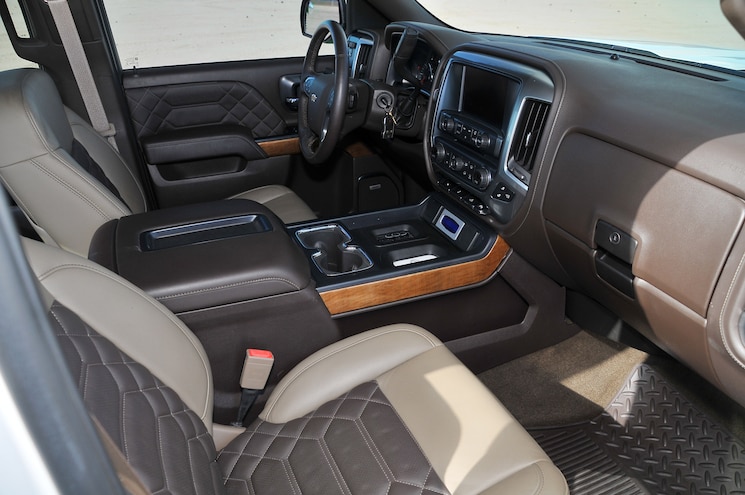 View Photo Gallery | 18 Photos
Photo 4/18   |   2015 Chevrolet Silverado 1500 Vanilla Ice Interior
Sean’s friend Greg Miller joked the truck was “cold as ice” and affectionately named it Vanilla Ice. Although Sean didn’t like the name initially, after a few weeks, everyone was calling it Vanilla Ice, and it grew on Sean. Phil Cholette from Philbuilt Designs in Canada custom-crafted a license plate bearing the name Vanilla Ice on it, and Sean proudly displayed it at SEMA.
Sean wishes to thank his loving wife Kristen for all her support and love, along with their two sons, Chandler and Carson. A special thanks goes to best friends Ken Bowles and Robert Simmons for all their help. He also wishes to thank his entire Acrophobia family for everything they have done throughout the years to help and guide him in the right direction. While most truck owners promise shops and builders they will be loyal and enlist them, Sean Randall stands by his word and follows through with everything he promises. Vanilla Ice is cold as ice, word to your mother.