An Aging Platform Makes a Case for Itself 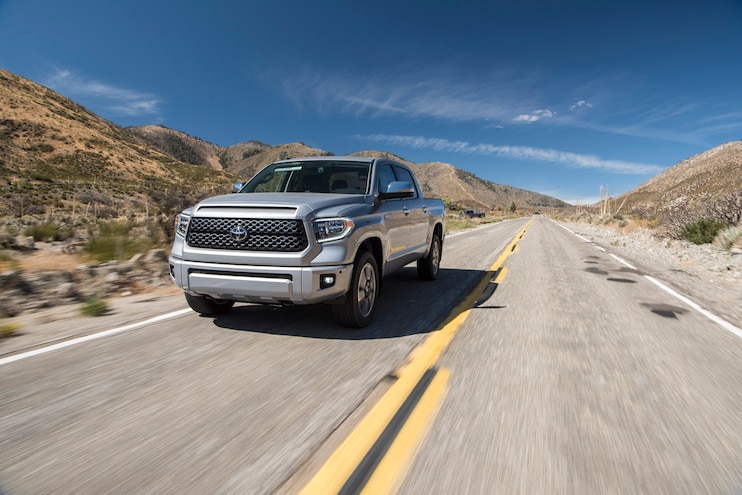 Foremost, this room’s most obvious elephant: The ’18 Toyota Tundra still rides on the same platform that made its first appearance for the ’07 model year. Since that debut more than 11 years ago, this country has seen three sitting presidents, one massive mortgage crisis, at least eight different iPhone generations, and plenty of vehicular progress. So it’s not surprising Toyota engineers went to great lengths to update the Tundra for the ’18 model year.
Thanks to an all-new electrical architecture, the new Tundra now features Toyota Safety Sense P (TSS-P), the company’s comprehensive suite of safety and convenience features designed to avoid collisions. TSS-P, which comes standard on every Tundra trim level, boasts forward collision monitoring with automatic emergency braking, lane monitoring, pedestrian detection, and radar-based adaptive cruise control. Mind you, this 11-year-old design now comes standard with features that are optional on some pickups, if they’re even offered at all. 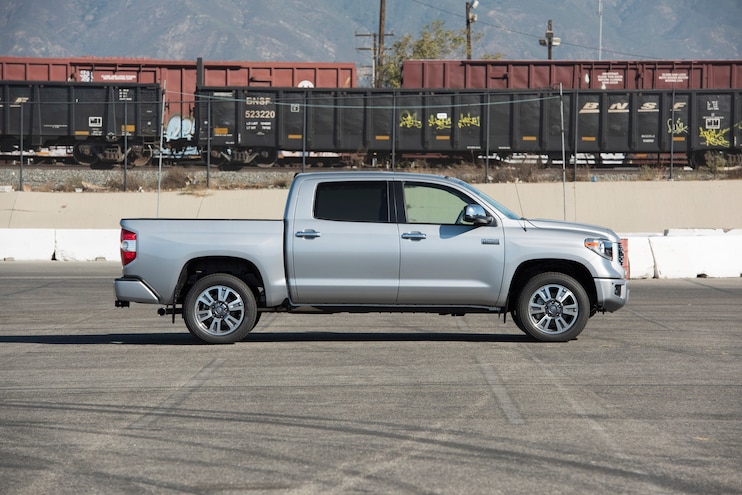 View Photo Gallery | 19 Photos
Photo 2/19   |   2018 Toyota Tundra Platinum Side
And impressively, each feature worked as advertised, with the adaptive cruise control providing gentle throttle and braking inputs for a smooth freeway ride. Unfortunately, cruise shuts off once it crosses a threshold at about 25 mph, so it doesn’t offer the stop-and-go functionality of the F-150. And we must admit, the lane-departure warning sensitivity drove us batty. At least it did its job by reminding us to keep the truck centered in its lane.
In the dirt, this Toyota upholds its family reputation for off-road performance, even in luxury-minded Platinum trim. Its suspension absorbed whoops with ease, preventing abrupt contact with the bumpstops. The Tundra’s Auto LSD and Active Traction Control aid low-speed crawl traction, with impressive suspension travel doing its best to keep all four wheels planted. A big windshield and narrow pillars improve visibility in all directions, refining the driving experience in tight off-road confines. 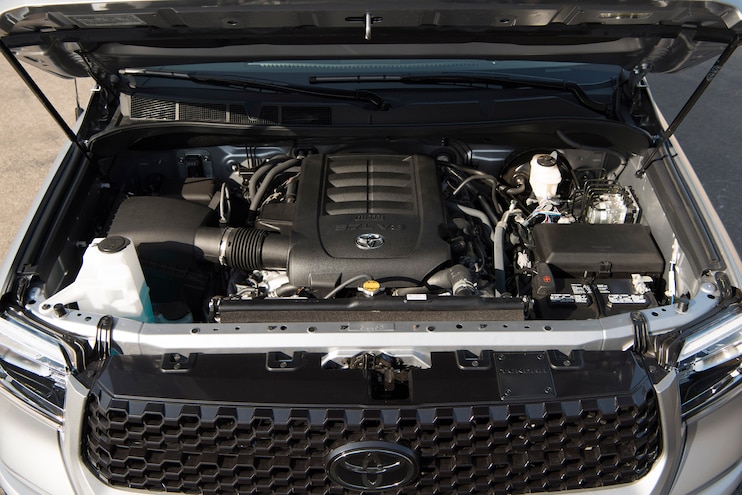 View Photo Gallery | 19 Photos
Photo 3/19   |   2018 Toyota Tundra Platinum Engine
The Tundra’s towing and hauling performance on our test was adequate, with plenty of grunt on tap from the Platinum’s standard 381hp 5.7L V-8 and six-speed automatic transmission. In panic maneuvers with and without a payload (professional driver, closed course, yada yada yada), the Tundra’s stability-control system activated almost transparently, keeping the truck on course with minimal drama. The same couldn’t be said of the Ram 1500 or F-150, which featured jittery intervention on those emergency lane-change tests.
However, the admittedly comfortable interior gave rise to the most obvious age-related complaints faced by the new Tundra. The Entune infotainment system is hopelessly outclassed, with a small screen, a low-resolution backup camera, and decade-old smartphone integration. The system never understood our voice commands, either. Thankfully, Toyota still includes plenty of physical buttons to adjust the radio and climate controls, so basic functions were fairly ergonomic. 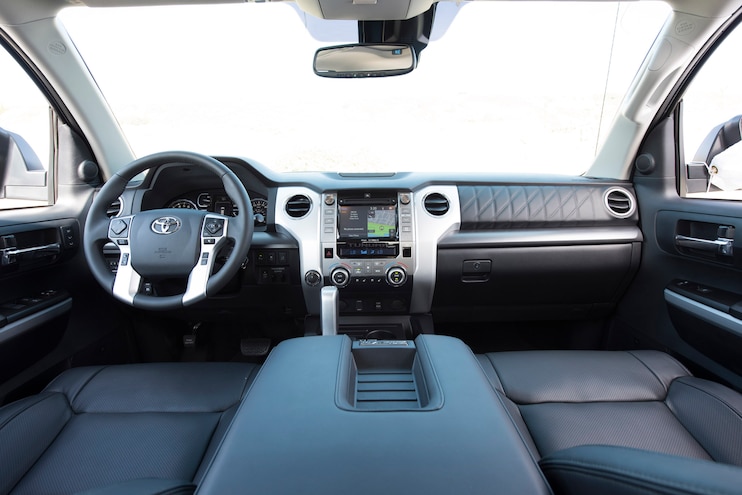 View Photo Gallery | 19 Photos
Photo 4/19   |   2018 Toyota Tundra Platinum Interior
Given the truck’s age, we were surprised by the quality that seems hard-wired into most Toyota vehicles. Buttons and switches felt durable, and the quilted leather on the seats and dashboard left an impression of luxury. The structure was solid, with no untoward jiggles or shakes on rough roads. Seat comfort and cabin quietness, long a hallmark of the Tundra platform, were also first-rate. And we still love the party-piece rear window, which disappears completely into the bulkhead behind the rear seat.
The Tundra left our offices with fans, folks who appreciated its off-road provenance, cushy freeway ride, test-winning V-8 engine note, and approachable familiarity. And with a surprisingly low $52,513 asking price, it represents a reasonable value as well.
But in the end, the Tundra is let down by dated engineering and limited personality. One of our particularly critical judges called the driving experience totally boring, although he later clarified that being forgettable also meant it didn’t have any glaring faults. Even the most charitable of us censured its dated styling inside and out, despite the slight visual changes Toyota made for ’18. Ultimately, in spite of the Tundra’s competence, there were trucks in this test that performed better in almost every metric.
WE LIKE: Quiet cabin. Decent suspension tuning off-road. Best-in-test exhaust note. Drop-down rear window.
WE DON’T LIKE: Uninspiring driving experience. Outmoded infotainment system. Boring, dated styling. 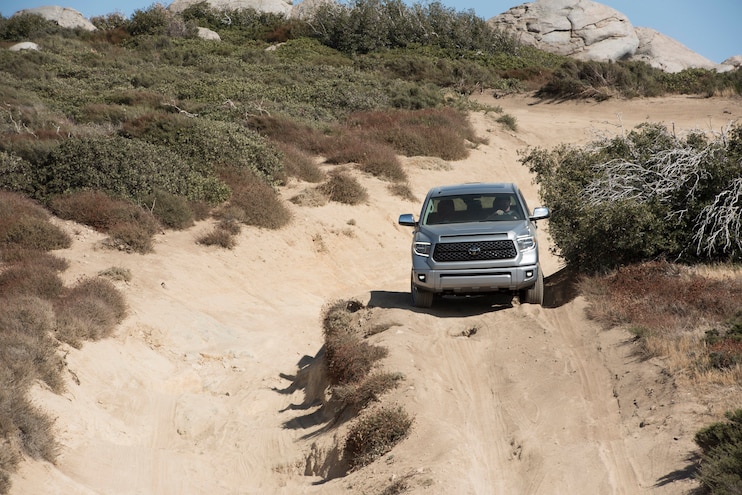 View Photo Gallery | 19 Photos
Photo 5/19   |   Toyota’s Tundra is a lot like your favorite blanket, comfortable and safe. We’re really looking forward to the next-generation Tundra, and have a sneaking suspicion it will be a real contender when it arrives.