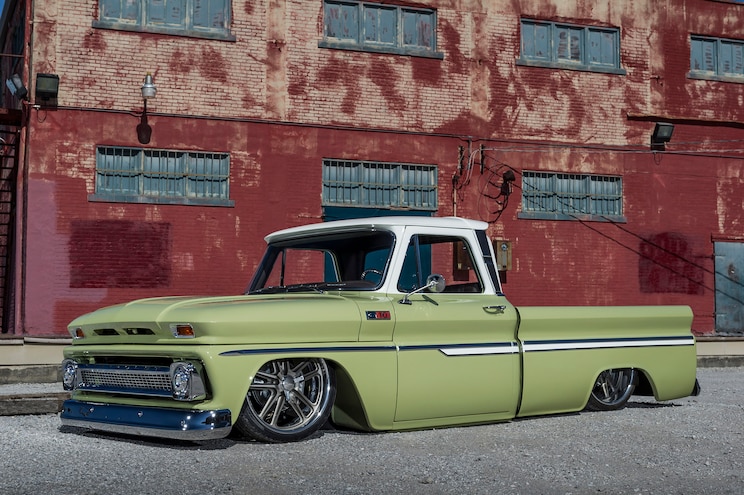 Mike Losh of Siloam Springs, Arkansas, is not new to the life of creating show-stopping custom builds. Having built various other award-winning and magazine-featured vehicles in his past, Mike knows quality—and he also knows what he wants to create when dreaming up a new project. He wanted to design a truck not only to further develop products for his company, Slosh Tubz, but to showcase it with his friends at Precision Replacement Parts at SEMA. Mike’s high standards and lofty ambitions immediately sparked when he came across the ’65 Chevrolet C10 that he chose to make his starting point for next few years. When he secured the rough-looking ’65 in September 2014, he began calling it Bertha, because she was “pretty ugly” to say the least. All that would change as the transformation began. 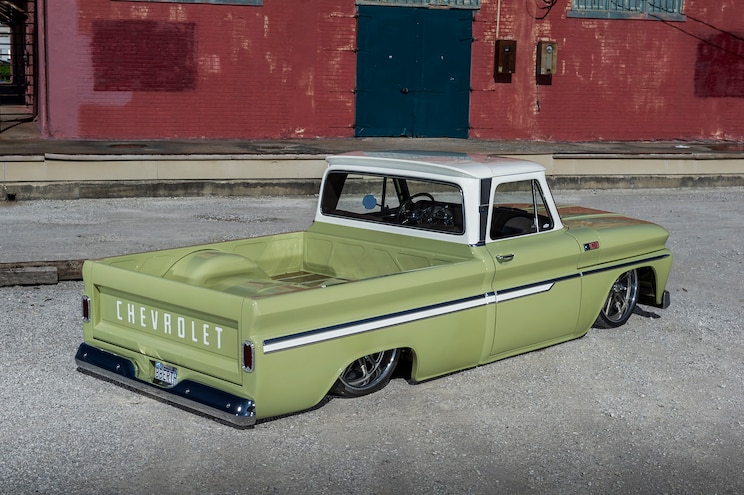 View Photo Gallery | 18 Photos
Photo 2/18   |   1965 Chevrolet C10 Boosted Bertha Rear
Every great build must have an equally great base, and that’s where the work began. The stock framerails were boxed and smoothed, and all the Porterbuilt components were welded in place and smoothed to eliminate the “bolt-in” look. Having the knowledge of past builds under his built, Mike knew that not only does a truck need to look great, it needs to ride well and be reliable. With that in mind, the front chassis setup started to come together: composed of a Porterbuilt air-bagged front dropmember with 1-inch narrowed tubular control arms and a Porterbuilt front sway bar. For the front suspension, Slam Specialties bags were chosen with the durable Firestone F9100 sleeve bags in the rear, all of which were given added stability by QA1 adjustable Street Star shocks in all four corners. After those components were installed, the frame was body worked and painted by Clem Johnson of Tuba Trucks. Since stopping on a dime can be a priceless ability, especially with a fullsize truck, Mike chose to install an SSBC Big Brake Kit with a massive four-piston caliper set. Under that, a large set of cross-drilled/slotted rotors not only enhance the look of Bertha but the performance as well. A CPP Hydro Boost brake system was tucked away beneath the dash mount to keep everything functioning as it should. 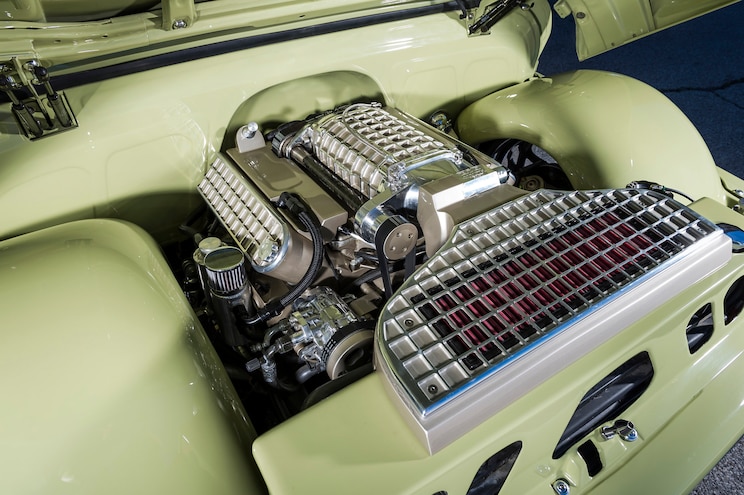 View Photo Gallery | 18 Photos
Photo 3/18   |   1965 Chevrolet C10 Boosted Bertha Engine
The heart of the beast is a Mast Motorsports LS 408. If that number alone does not impress you, wait until you see the full parts list on this built LS. It includes but is not limited to: Callies Compstar crank and rods, Mast Black Label LS7 265 heads, an LSX turbo cam, and a polished Magnuson LS7 supercharger with custom-made intake from Wegner. For anyone who believes power alone is not enough, the entire motor and engine bay is pleasing to the eye as well. The complete front-drive system is custom-painted to match Bertha by Rick Shull, and a set of custom coil covers and an air filter cover were created to match the top of the supercharger. In addition to using his own design of inner fender tubs by his company Slosh Tubz, Mike also built one-of-one sheetmetal engine bay pieces to set the motor off right. To make sure all this power would be put to use, a TCI 4L80e transmission with a 10-inch billet converter was bolted on to that massive powerplant. From the transmission headed toward the back, a QA1 carbon-fiber driveshaft bolts up to the Currie 9-inch containing 4:11 gears and 35-spline axles, which are contained in the Trutrac differential with a polished aluminum housing. 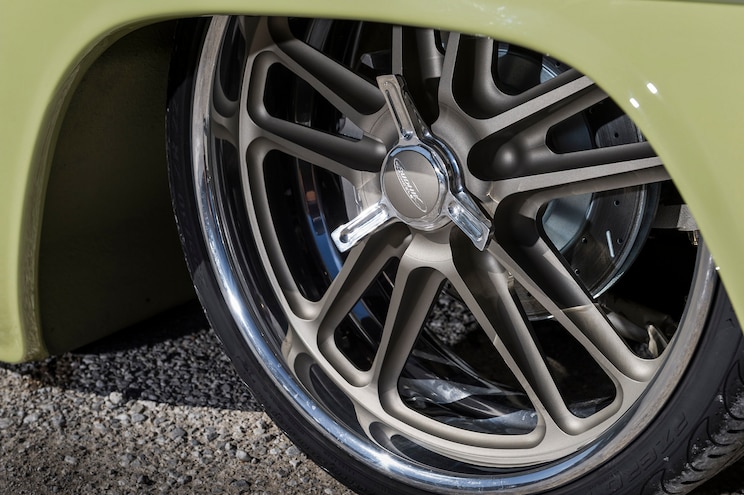 View Photo Gallery | 18 Photos
Photo 4/18   |   1965 Chevrolet C10 Boosted Bertha Wheel
As the truck came together, Mike began to see the ugly truck he knew as Bertha transform; the more he saw it, the more he felt she deserved a nicer name to accommodate her new look—and Boosted Bertha was born. As the undersides and hidden features of this ’65 Chevy were completed, the exterior began looking the part of a SEMA truck as well. Starting by tucking the front and rear bumpers, Mike made sure not to skimp on any of the little details, such as welding then smoothing the body seams of the C10. He wanted every aspect of this truck’s exterior to be pleasing to the eye. Though many people would never realize these changes without them being shown to them, the elbow grease was put in to shave the drip rails off the upper cab above the doors. Mike’s favorite change to the more-than-50-year-old Chevrolet was widening the front end of the truck bed to match the width of the cab. It’s small differences like these that show his vision as a veteran builder. As the custom shade of Mango Green was laid down by Eddie Jewell of Jewell Restoration, the truck really started to take shape. 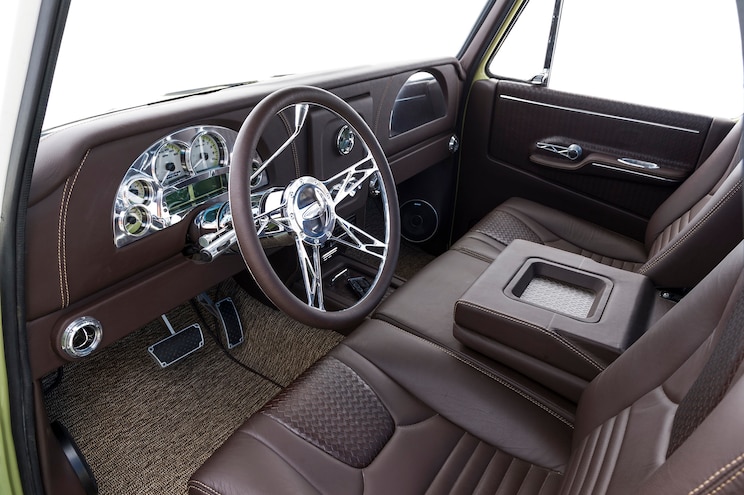 View Photo Gallery | 18 Photos
Photo 5/18   |   1965 Chevrolet C10 Boosted Bertha Interior
Though nothing about the build thus far has been easy, the interior was by far the biggest thorn in Mike’s side throughout the entire process. He went so far as to buy the company he hired to do the interior a complete spare cab in which to build it (since they were located out of state). The plan was to have the interior completely done and ready to install numerous months before SEMA. However, the company Mike graciously declined to have named instead showed up three days prior to the show with nothing finished and almost cost him his SEMA trip! With a bit of social media help and a little luck, Boosted Bertha finally had the good fortune of being finished enough for SEMA thanks to a stranger who reached out to help. “Rory is a class act, and I am so thankful for his hospitality and willingness to help,” Mike says of the stranger’s kindness. After the week in Vegas was complete, upon returning to Arkansas, Mike began a full rebuild on the interior so it could be completed the way he always envisioned it. With the door panels, headliner, and more already completed, the seats were wrapped in a dark chocolate leather by Billy Hoover Street Rods. With all the interior's pedals, trim, and door handles done in aluminum, they perfectly match the existing Dakota Digital gauges installed in the custom-built dash. After the complete rewire by Brock Payton and the installation of a full Kicker component set with 10-inch shallow-mount subwoofers, Mike finally saw his vision complete. As Boosted Bertha rolled out of the shop on the beautiful staggered set of Budnik Pivot wheels, Mike breathed a sigh of relief and happiness—and began to dream of his next build.