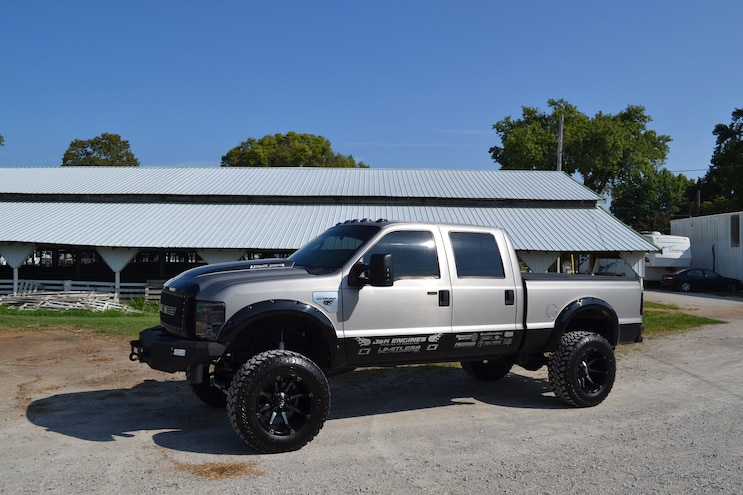 Have you ever heard the old saying about the cobbler’s children? They were the last ones to get shoes made. Hey, can you blame the guy? After slaving over everyone else’s footwear all day, do you really think he wanted to knock out a few pairs of freebies for the kiddos? The same scenario can also haunt people who work in the diesel performance industry. After spending all day and half the night at the shop cranking out customer work, a guy’s or gal’s ability to wrench on or create a project can be hampered.
We’re happy to report this was not the case with Anthony Cammarata, Jack Cammarata, Keith Proctor, and Zac Wolfe at J&K Engines in Mount Juliet, Tennessee, as they all had a hand in the creation of the killer ’05 Ford F-250 you see here. The Super Duty not only looks cool, it’s also loaded with one of the most interesting engine combinations that exists in today’s diesel spectrum—a 6.3L (383ci) Power Stroker—and J&K developed it. 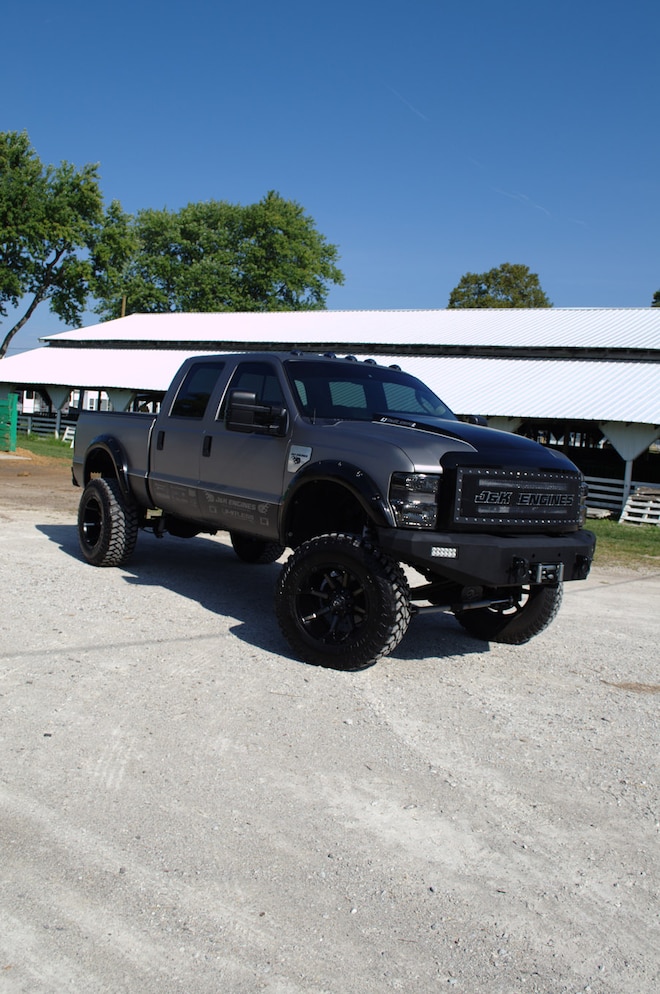 View Photo Gallery | 54 Photos
Photo 2/54   |   Everyone has a picture in their mind of what their dream truck will look like when it’s completed. For Anthony Cammarata, his ultimate rig, the ’05 Ford F-250 adorning these pages, combines a clean and modern appearance with an interesting and innovative engine combination.
“The F-250 was basically the perfect project truck when we got it,” Anthony tells us. “It was a rust-free truck from Texas, but it was beat up. The 300,000-mile engine was blown, but the good thing about it was the fact that it was the exact style of rig we wanted to start with, and it had all the stuff we wanted, like four-wheel drive.” That’s an important point, because rather than going with the typical trend of building a street truck with a lower profile, Anthony and the guys decided to go big. “Honestly, we want something big and fast that we can use,” Anthony explains. “We are not just trying to get attention at shows. You can look at our website and see the F-250 in mud and all. We didn’t want to go over the top with this truck inside or outside. We wanted this to be something working guys can relate to and appreciate. It’s definitely well built, but it is not an ultra-flashy $100,000 truck.”
There’s no argument that the truck’s immediate eye-catcher is its 8-inch lift, established through a combination of pieces from BDS Suspension, Fox Factory shocks, Fuel wheels, and 37-inch Maxxis Buckshot M/T tires that connect the rig to the ground.
The interior area received a unique treatment. Anthony swapped the stock front seats with sportier buckets and removed the original rear bench seat in order to make way for three bucket seats in the back of the crew cab. Limitless Autoworks is responsible for the very trick brushed titanium vinyl wrap (the first we’ve ever seen) that gives the exterior its uniqueness. The only callout regarding the engine is some script along the raised portion of the cowl hood.
Which brings us to a point where we let you know J&K Engines is a business that specializes in Ford Power Stroke engines. We’re talking everything from stock long-blocks to the stroker that motivates Anthony’s rig (created by boring a 6.0L block 0.040 inches over and installing a 6.4L Power Stroke crankshaft). 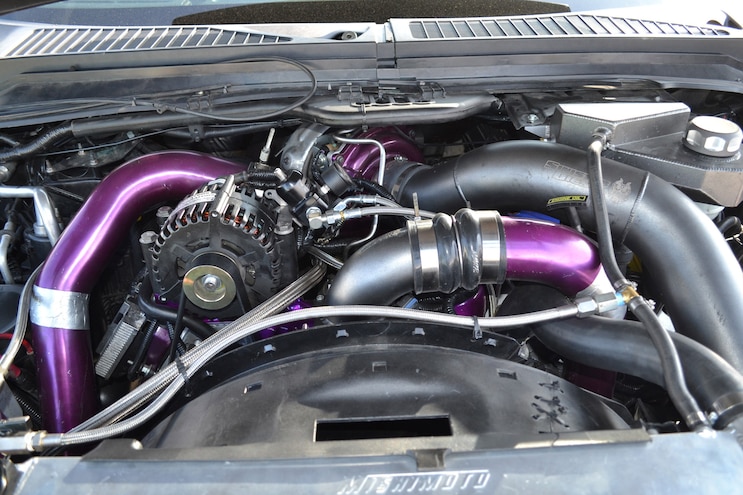 View Photo Gallery | 54 Photos
Photo 3/54   |   While it has all the looks of a standard issue 6.0L engine, there’s so much custom trickery going on here, it’ll make your head spin. The best part is that it is all hidden inside. The high-profile modification is the addition of the custom-machined 6.4L Power Stroke crankshaft. This is one potent built engine.
“When you spend as much time with these engines as we do, you start to look at things,” Zac says when asked how the wild combination came to be. “Our lead engine builder Keith Proctor is the one who came up with the design for this package, and he put in a lot of work to refine it into what it is today. There is a lot of precise machine work that goes into these engines in order to get the longer crankshaft to work correctly. There isn’t one part that is more difficult to work with than another, but we have to be very careful with everything, because one mistake will cause other problems.” The gains from the additional stroke have shocked everyone, including the crew at J&K. 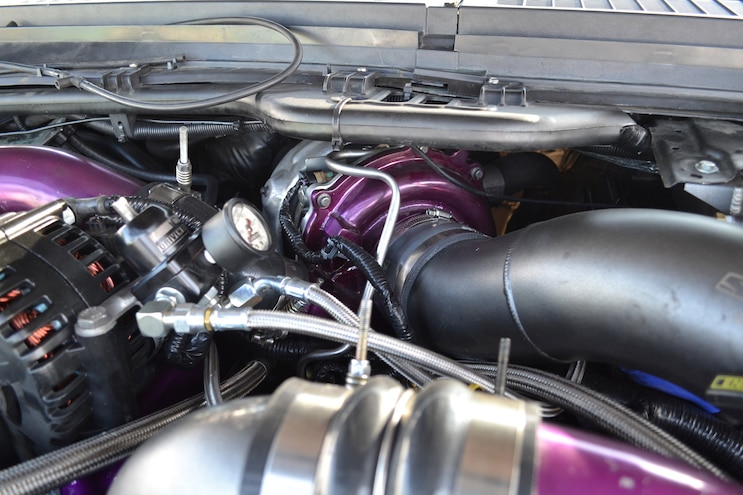 View Photo Gallery | 54 Photos
Photo 4/54   |   One of the cool things about the 6.3L Power Stroker engine in Anthony’s truck is the fact that it still uses a single turbocharger mounted in the stock location. KC Turbo’s Stage 3 ’charger provides the boost.
Even during the tuning period, veteran diesel performance guys were blown away. “Our tuner had his jaw on the floor when we got this sorted out,” Anthony says. “We really have gone at this backward compared to many other builds these days. Most people bolt on compound turbochargers, increase injector size, and add a fuel system. We still have a single variable-geometry turbo on the engine, and it is making more than 600 hp and 1,250 lb-ft of torque. It has a pretty mild cam, stock heads with small amounts of porting, and we have not even sprayed it with nitrous-oxide yet.” In 2018, the ambitious goals for the truck are centered on upgrading all the systems that support the long-block to really push the limits of the 6.3L Power Stroker.
This F-250 is a great reminder that there are people out there pushing the boundaries and the technology of diesel performance. From the earliest days of hot-rodding, talented people have taken parts that were never meant to go together and found a way not only to make them work but also to get pieces to perform better than they did before being joined.
Anthony Cammarata and his ’05 F-250 are pushing the boundaries of the possible and thinking outside the proverbial box. As Zac Wolfe says, “One of the most fun things happens when we are at shows, and, after checking out the entire truck, people don’t understand how it is possible to do what we have done until we explain it to them.” Judging by the stout horsepower the 6.3L Power Stroker makes with a mild setup, the competition is going to be wondering the same thing once these fellows really step on an already potent combination.

View Photo Gallery | 54 Photos
Photo 5/54   |   The cowl-style hood and fender flares are the two biggest exterior modifications on the F-250, along with custom front and rear bumpers. The truck strikes a great balance between show and go. With classy looks and more than 600 hp, there is plenty of both! 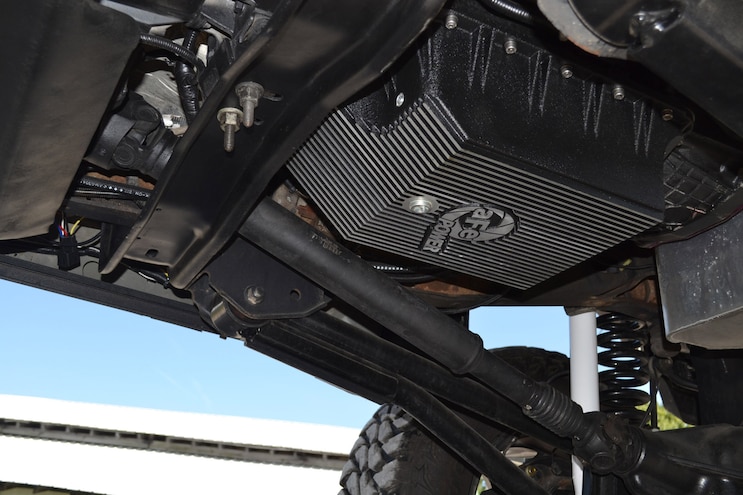 View Photo Gallery | 54 Photos
Photo 6/54   |   This deep AFE Power transmission pan keeps the fluid in check, and, as you can see, the underside of this F-250 is clean enough to use as a surgical surface. Heck, when the crossmembers shine, you know you have a clean rig! 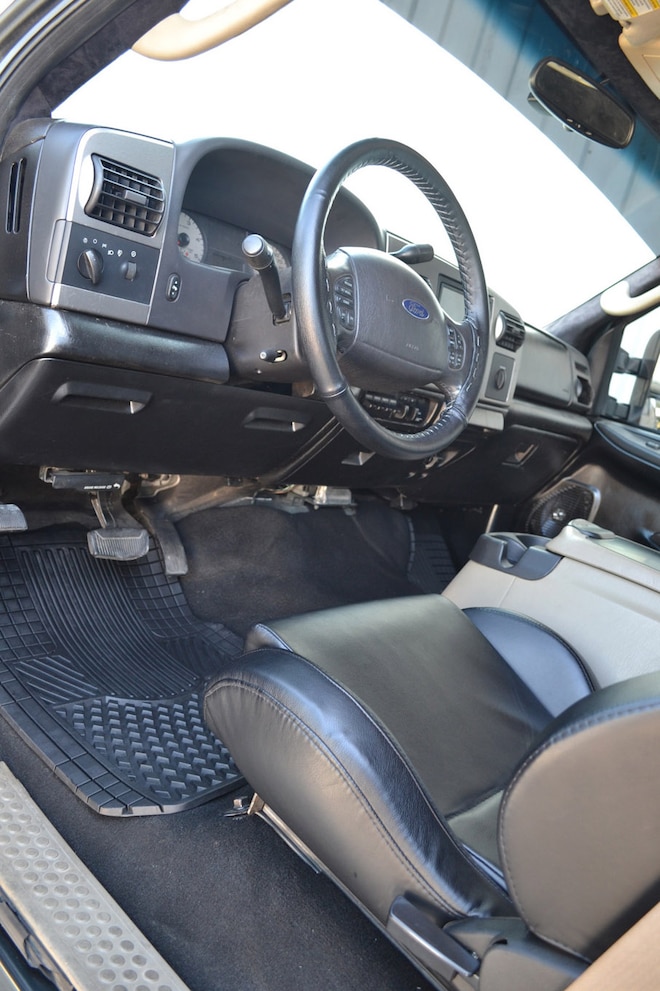 View Photo Gallery | 54 Photos
Photo 7/54   |   Anthony kept the interior mostly stock but did add some cool custom touches—most notably five matching bucket seats. Passengers in the back can strap in and hold on when he hammers the throttle! 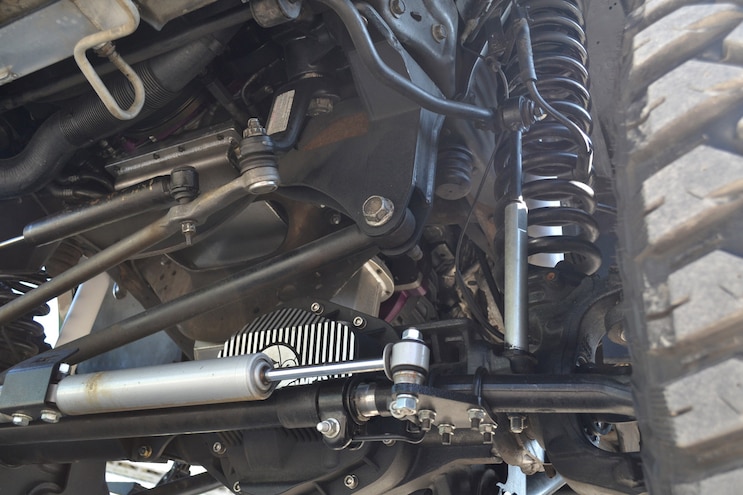 View Photo Gallery | 54 Photos
Photo 8/54   |   No scary steering here. Like the engine build, the rest of the truck was done with quality and endurance in mind. The 8-inch lift kit brings the truck’s stance up but does not detract from its ride quality or driveability. 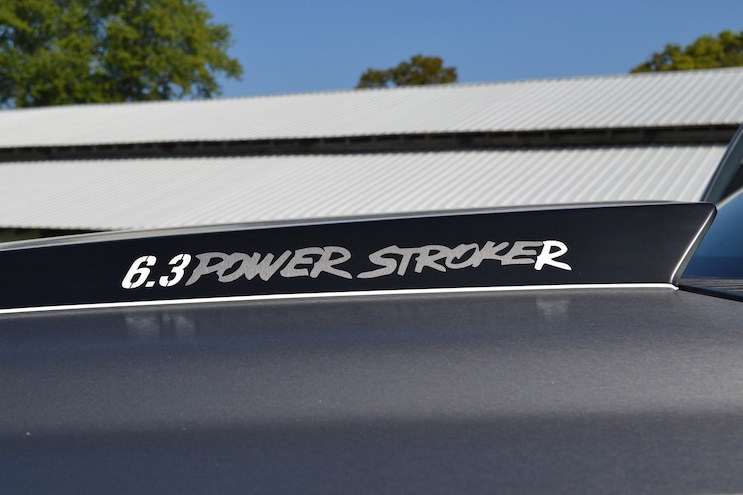 View Photo Gallery | 54 Photos
Photo 9/54   |   That’s not just a fun decal, it is a call out for the really unique and cool 6.3L stroker engine J&K Engines has developed using the 6.0L Ford Power Stroke platform. We’re sure it raises eyebrows for those who don’t know. 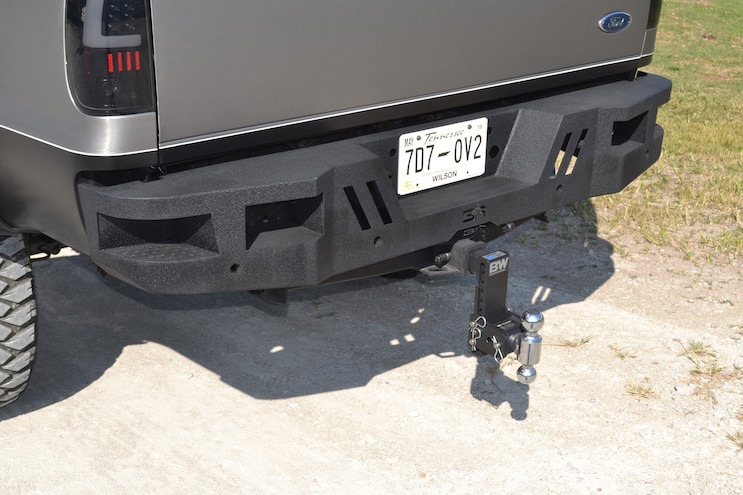 View Photo Gallery | 54 Photos
Photo 10/54   |   When form meets function, you get this! The tough look of a custom bumper is one thing, but those footholds and the integration of the hitch is another. With an 8-inch lift on the truck, getting in and out of the bed is much easier when you have a place to step. 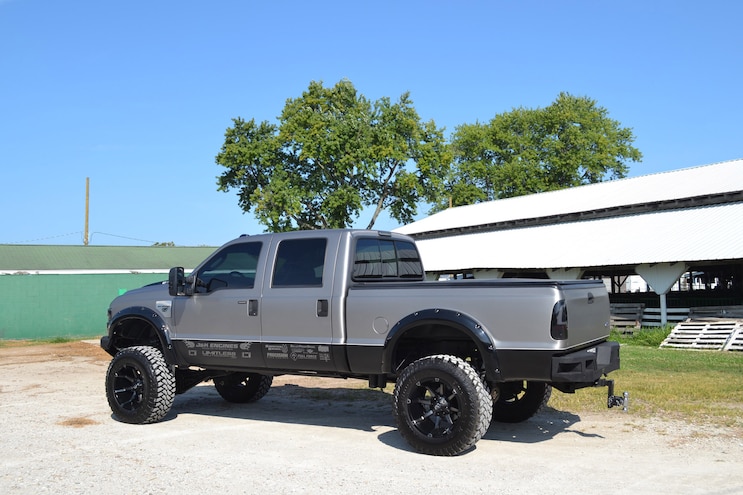 View Photo Gallery | 54 Photos
Photo 11/54   |   When a custom engine is the focal point of a truck, it can be easy to overlook exterior details. Anthony definitely didn’t. The cool, faux-brushed-stainless-steel wrap is really clean, and his choice of 20x12 Fuel Coupler wheels sets the package off nicely. 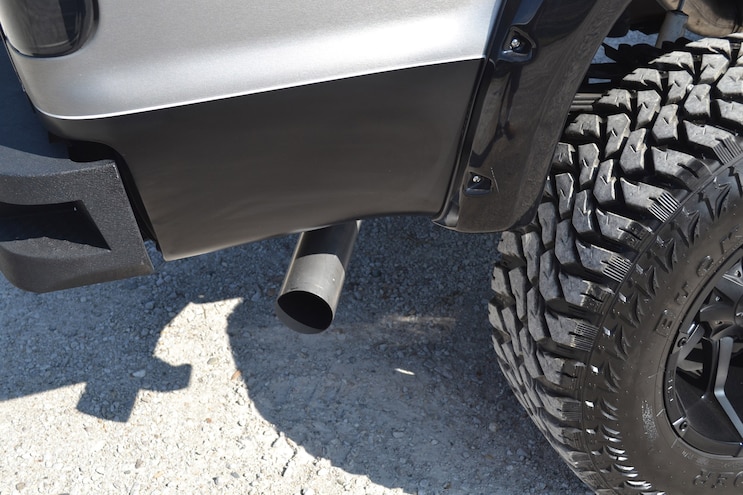 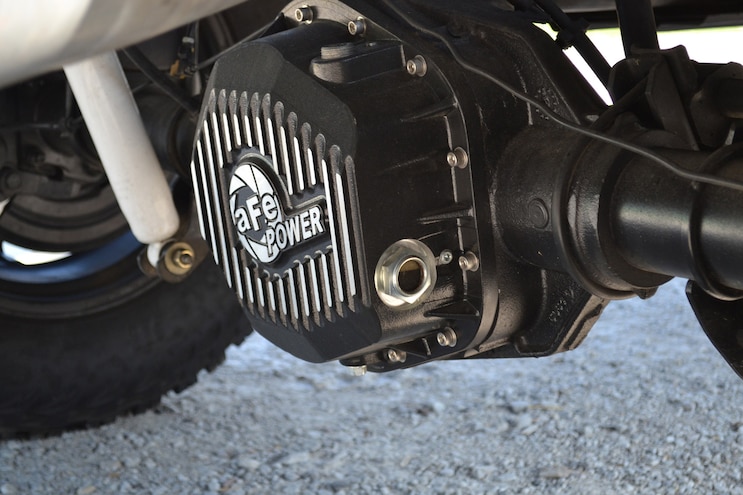 View Photo Gallery | 54 Photos
Photo 13/54   |   The strong factory Sterling 10.5-inch rear axle has been beefed up with a differential cover to increase gear-oil volume and enhance rigidity of the already beefy housing. With 1,250 lb-ft of torque, any upgrade for more strength is a good one!