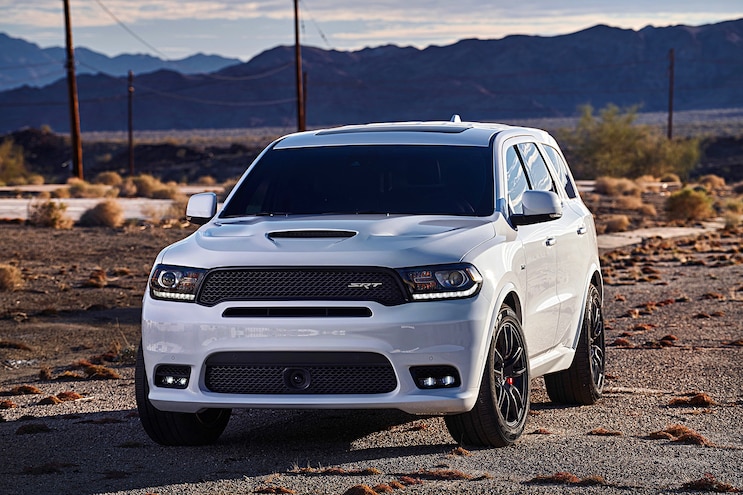 Coming in to turn 11, we stepped hard on the brakes as we’d done for 15 laps. They went softly an extra half-inch toward the floor, which you don’t want to feel at 117 mph. You may be asking why anyone would be racing a 5,000-plus-pound, three-row Dodge Durango. Well, because Dodge says the ’18 Dodge Durango SRT is a righteous member of the SRT family and can take it. The Durango SRT does 0-60 in 4.4 seconds, is NHRA-certified to pull the quarter in 12.9 seconds, and stops in less than 120 feet. So, yeah, we were driving like we stole it.
On the track, ambient temperatures were in the high-80s and the track temperature was 100-plus degrees Fahrenheit. So a bit of brake fade was to be expected after three sessions of hard use. While we slowed to let the brakes cool, the big Brembos were still able to drag us down on each corner, which is sort of mind-blowing. 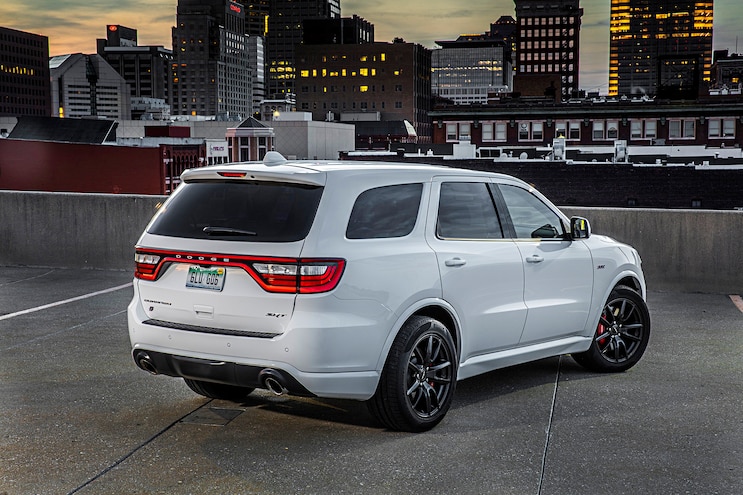 Debuting for the ’98 model year, the first two Durango generations had a body-on-frame design, sharing bits with the midsize Dodge Dakota and the fullsize Ram 1500. The current generation went on sale in 2011, abandoning that truck architecture for a Jeep Grand Cherokee–derived unibody chassis. However, Durango is about 5 inches longer, so it rides like a much different platform.
In lesser models, the Durango is available with either a 295hp 3.6L Pentastar V-6 or a 360hp 5.7L Hemi V-8. But the SRT gets a Hemi displacing 6.4L and making 475 hp and 470 lb-ft. The SRT also sets itself apart with stiffer suspenders, better brakes, and widebody styling, with a hood with functional air inlets and heat extractors. There’s plenty of luxury in this beast: a programmable digital instrument cluster, standard leather and suede interior (Demonic Red Laguna leather seating optional), carbon-fiber trim, and standard paddle shifters.

Dodge brought Pete Jacobsen, the vehicle development manager for the truck, to GingerMan Raceway for interviews. We asked Pete why the heck Dodge would even consider making this low-volume brute. Evidently, the company had wanted an SRT Durango for a while, so it was just a matter of making it happen. 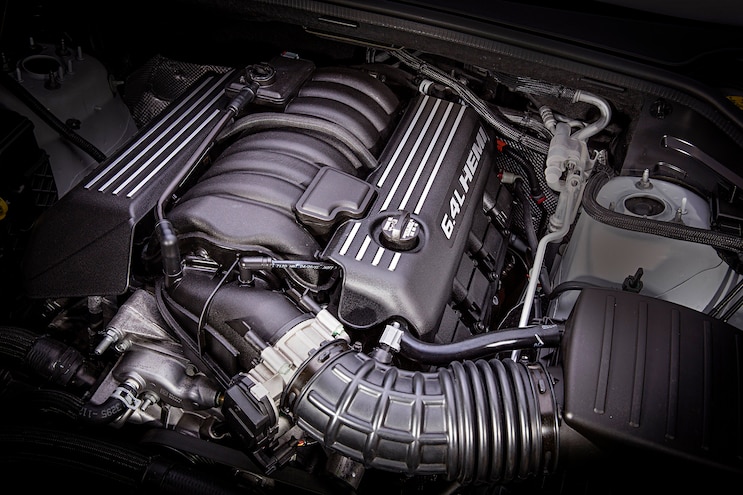 We’d been overwhelmed by how flat the truck cornered and how stiff it was in roll resistance, so we had to ask how they did it. Pete informed us that it runs on much stiffer bushings, with stiffer springs and a stiffer front antiroll bar than the regular Durango.
Part of the ’18 Durango SRT’s ability on the track is due to improved damping, thanks to an adaptive damping shock system. The valves for bound and rebound can each adjust in 1 millisecond “We have an accelerometer on the body and it will manage the suspension damping to smooth out the ride,” Pete said. On the track there is no shake or rattle, and fast cornering transitions are more akin to a Charger or Challenger than any truck. Especially in Race mode, the Durango SRT drives like the muscular sports-SUV it is. Aside from the trick dampers, the suspension layout is conventional, with a short- and long-arm suspension, front coilover shocks, and a rear multilink. The front and rear adaptive dampers come from Bilstein, which is why they do their job so well. 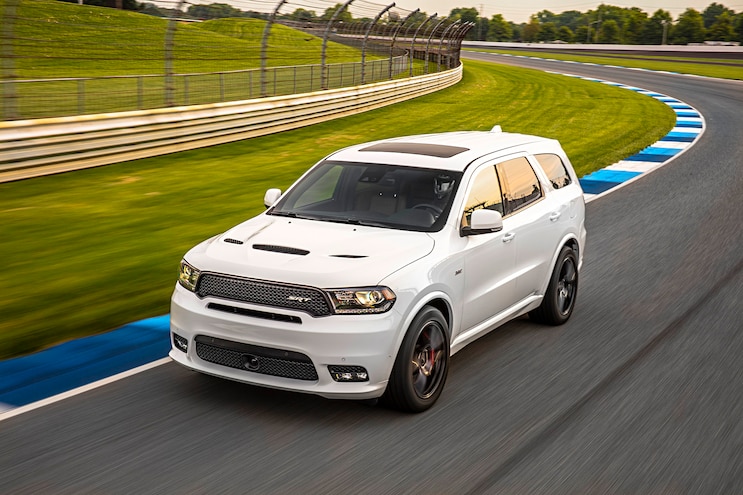 But Will It Stop?

“Brembo is our brake supplier,” Pete said. “They did the entire kit: the pads, rotors, and rotor design, and it was all specific to this vehicle.” The company claims a 60-0 stopping distance of 115 feet, pretty good for a fully trimmed 5,510-pound vehicle. That performance comes by way of pizza-sized brake discs: 15 inches in front and 13.8 out back, with six-piston calipers in the front and four-piston calipers in the rear. Taking full advantage of both the adaptive damping suspension and the upsized brakes are 295-section-width Pirelli tires, larger than what would be found in any other Durango.
So is the Durango just a glorified engineer’s toy?
“Sort of,” Pete said. “It's our standard 392 Hemi, similar to what's in the Jeep Grand Cherokee SRT. Packaging changes were minimal. The ZF eight-speed automatic transmission is tuned for the vehicle, and the engine has its own calibration. It's not exactly the same as any other FCA product. From the cat-back, it gets a unique exhaust.” 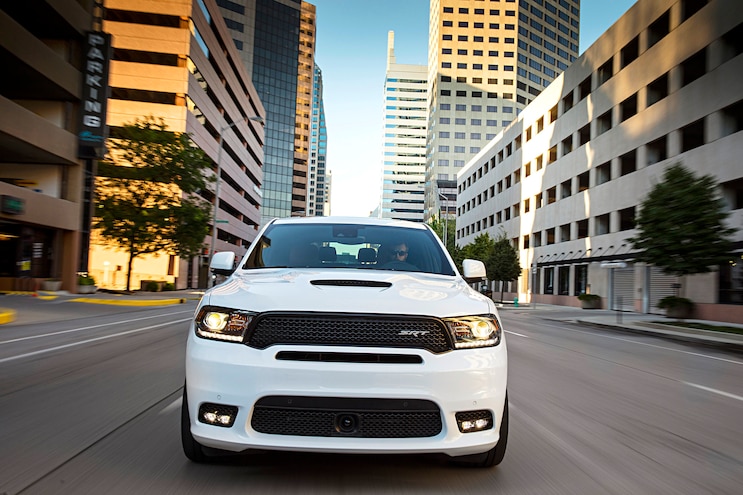 Another facet is towing. “We went from a 7,200-pound tow rating at the beginning of the program to an 8,700-pound towing capacity,” Pete said. The Durango meets SAE J2807 tow standard, guaranteeing performance and durability, even on steep grades.

Normally, we have a week or more to fully wring out a test vehicle, and we usually get some time away from the test track to evaluate how it performs in the real world. Unfortunately, we’ll have to wait a little while to get some more seat time in the Durango SRT, which really sucks. We want this beast in our garage, and we want it now! 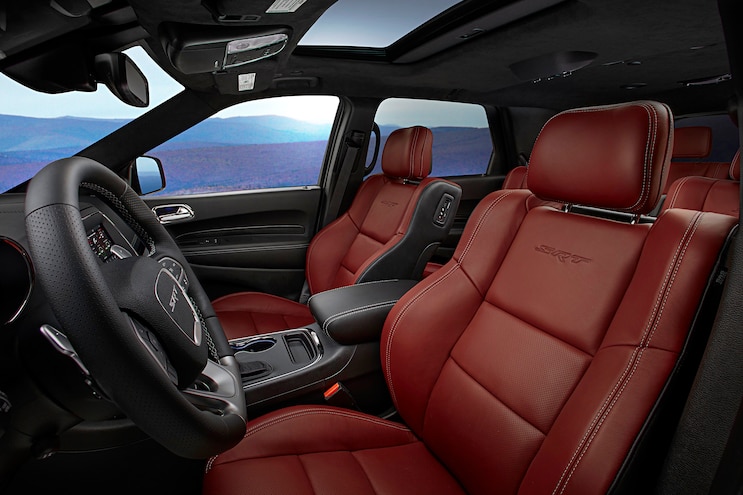 - OF
By Thom Cannell
3 Articles