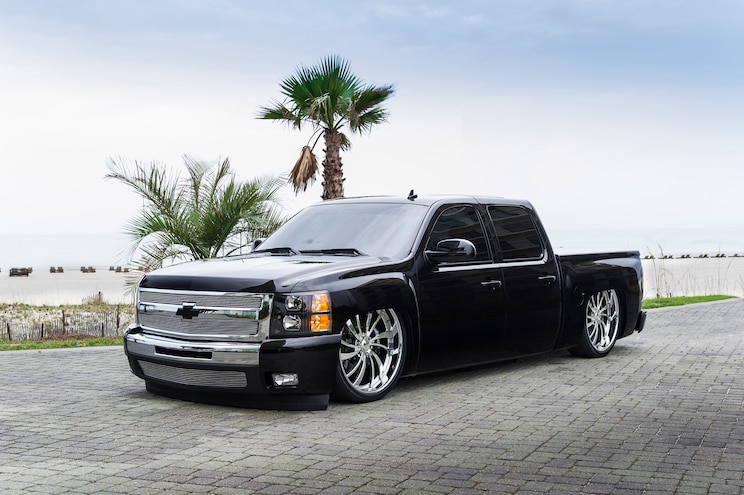 In a truck scene full of Silverado projects and limitless resources to find the newest and best trends floating around shows and the Internet, how does a builder make a truck truly unique? Steve Palmer of Decatur, Alabama, can tell you it’s no easy process. For him, it all began with the goal of owning a fun, worry-free truck for his wife and family to enjoy while making memories together on long road trips. While he had originally been considering Fords, something about not only the reliability, but the looks of the Chevrolet Silverado won him over. The body lines and front grille really appealed to him. At the time he was vehicle shopping, Steve was actually deployed overseas for his job with the Army, so he was doing his shopping online. Even though he had never set foot inside a Silverado at that point, when Steve came across a ’12 Silverado with less than 4,000 miles on it, he bought it. Since Steve was overseas, there was a lot of communication done via phone and computers to get everything completed, but with some help from the dealership and his nephew, Steve was able to get the truck to his home in Huntsville. After doing some research as well as talking to some other vehicle owners about their work from other shops, he chose to use Little Shop Mfg. to build the truck he had envisioned for himself and his family. 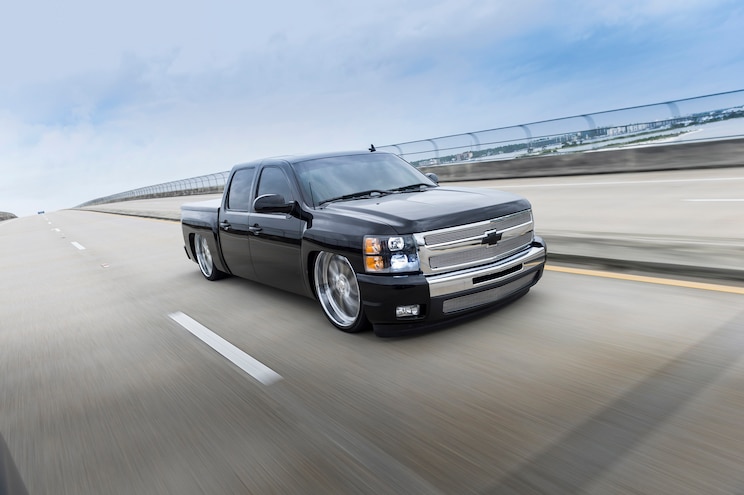 View Photo Gallery | 11 Photos
Photo 2/11   |   2012 Chevy Silverado Drop Dead
The Silverado was sent out to the Little Shop headquarters in Tennessee, and the project was started following SEMA 2013. As is the case with pretty much every single build Little Shop takes on, all the bodywork, paint, brakes, and every aspect of the chassis from top to bottom was done by Little Shop. When it came down to the major decision regarding whether Steve would want the truck body-dropped or not, he decided he wanted it to “look stock and behave custom.” This Silverado build was all about keeping it simple, reliable, and stress-free. Using Slam Specialties SS8 bags up front, which were supported by Belltech Nitro 2 shocks, Little Shop made sure this truck would ride just as perfectly as it did stock—except about a foot closer to the ground when doing so. In the rear, a KP Components cantilever four-link kit was used to ensure the same quality of ride and keep the truck simple to maintain over the years. With Accuair E-Level management aboard this family cruiser, setting automatic ride heights and airing out could not be any easier. Knowing stopping is just as important as driving a beautiful truck, Little Shop installed a full set of 16-inch Wilwood rotors on the front and back. 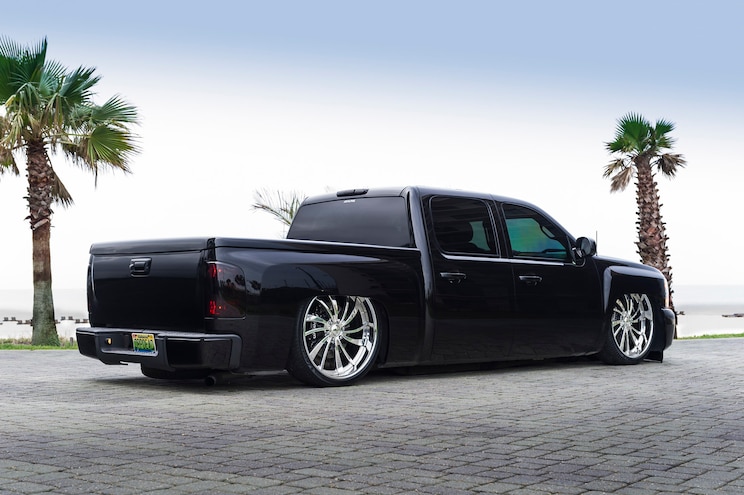 View Photo Gallery | 11 Photos
Photo 3/11   |   2012 Chevy Silverado Drop Dead Rear
Staying true to the theme, Steve and the Little Shop crew kept the GM 5.3L V-8 mostly stock but added a Black Bear Performance—tuned ECM for a little extra performance. An engine-driven compressor was added as well as a backup Viair compressor. After Little Shop added full tubs to the front fenders, a one-of-a-kind second fuse box was created on the passenger side of the bay to mirror the OEM fuse box; it was used to hide the Accuair VU4 block. Simple does not have to mean stock, and the Little Shop team proved this with all the little changes they made to the body to make this truck unique for Steve, from shaving the bed stakes to rolling the edges on the inner fenders, and even adding custom-fit splash guards to the new posture of the Silverado. After the addition of the billet grille sets, the exterior was almost complete, but the interior had just begun. Installation of the full Alpine stereo commenced, including a 7-inch double-DIN head unit, an 11-inch rear DVD screen, four sets of SPR60C 6-inch speaker components with amps to power them, and dual PDX M12 subwoofers. Needless to say, this stereo sounds far better than the OEM setup. After the addition of some painted trim pieces, all the pillars were wrapped in a leather to perfectly match the seats. 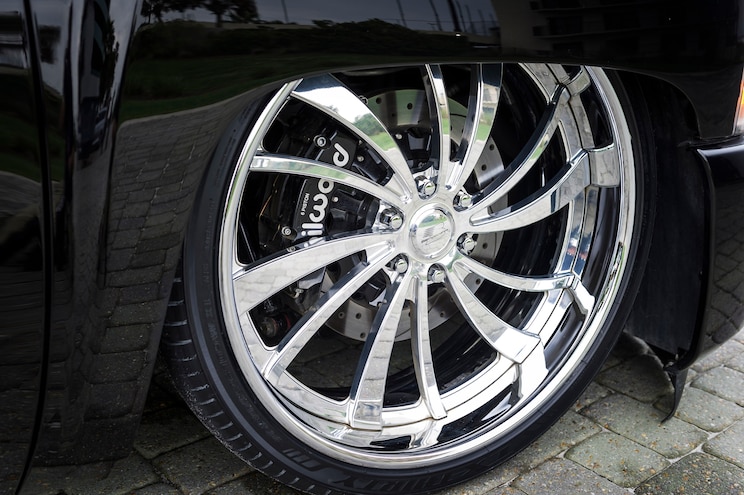 View Photo Gallery | 11 Photos
Photo 4/11   |   2012 Chevy Silverado Drop Dead Wheel
The final piece of the puzzle was a joint decision by the Palmers. Steve had gone back and forth between a few major brands to fit the truck with shoes. His wife, Marie, said to him, “Everyone else already has Racelines and Intros, get the Billet Specialties and have something different.” That is one wise woman. The specific set he went with was the 26-inch three-piece Billet Specialties BLVD 64. These were actually the first-ever set of three-piece BLVDs created by the company. Steve chose to wrap them in 305/30/26 Lexani tires, and with that, it was a wrap. The first time Steve saw the truck in person was upon completion from Little Shop, and it was at that moment it gained the name Drop Dead—because it was “drop-dead sexy.”
Steve would like to thank Little Shop Mfg.’s Eric, Josey, and Tim for their hard work and meticulous attention to detail; Billet Specialties’ Ryan (in sales) and Scott (in marketing); Ray at Cuevas Customs; Grant and Taylor at The Speaker Box; and Matt at Hornbuckle Auto Detailing for all his hard work cutting the paint. Most importantly, he would like to thank his wife, Marie, for putting up with him during this process and because she really stepped up and got involved with the truck scene. “Thanks for being so supportive of me and what I wanted to build for our family.”