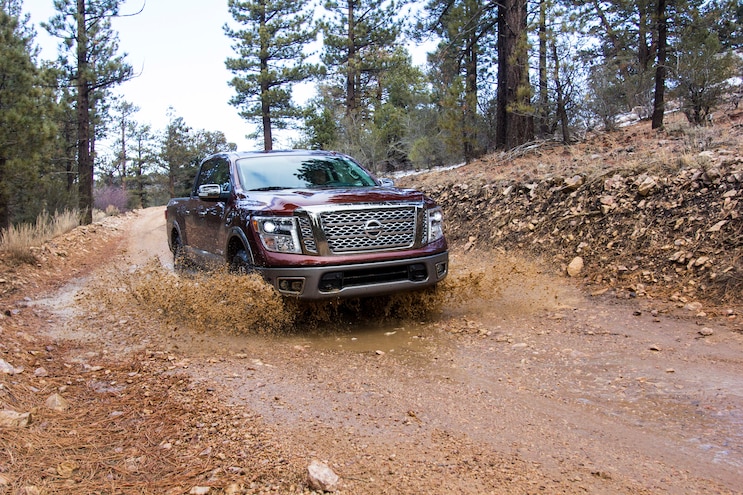 We’ve hit the halfway mark of our year with the 2017 Pickup Truck of the Year–winning Nissan Titan, and it’s fair to say the truck continues to impress. For this period, we’ve continued the same testing regimen as before, with a good combination of city and highway driving along with a fair bit of towing mixed in. The truck remains quiet and comfortable, and we’ve had no issues that have needed addressing.
Before we get too far in, we need to address the elephant from our first report, which is the Titan’s fuel economy. This test period saw a marginal improvement in average economy, up nearly 1.5 mph. However, the 14.29-mpg average that we have achieved still misses the mark of the truck’s EPA-rated 18-mpg combined. Even trying our hardest on the open highway, chugging along with cruise control activated at the posted speed limit, we’ve only been able to muster 17.95 mpg, missing the EPA-rated 21 mpg by a fair margin. We’ll continue our efforts to improve the overall fuel economy, but we’ve resigned ourselves to the fact that we’re getting the same mileage as our ’07 model did.
One place the Titan really shines is in the area of bed utility. We started out skeptical of the bed-mounted Titan Box storage bins, but after living with them for half a year, we’re sold. While the space provided in our shortbed isn’t exactly cavernous, the Titan Boxes have allowed us to easily store and retrieve such odd items as our trailer hitch, jumper cables, cargo tie-downs, workout equipment, and other dirty oddities that we didn’t want in the cab. The boxes have remained watertight through torrential rain and dozens of car washes, and the locking feature keeps sticky fingers at bay. The Titan Boxes haven’t impeded the usefulness of the bed itself yet, but the boxes are removable if we need to haul something large. 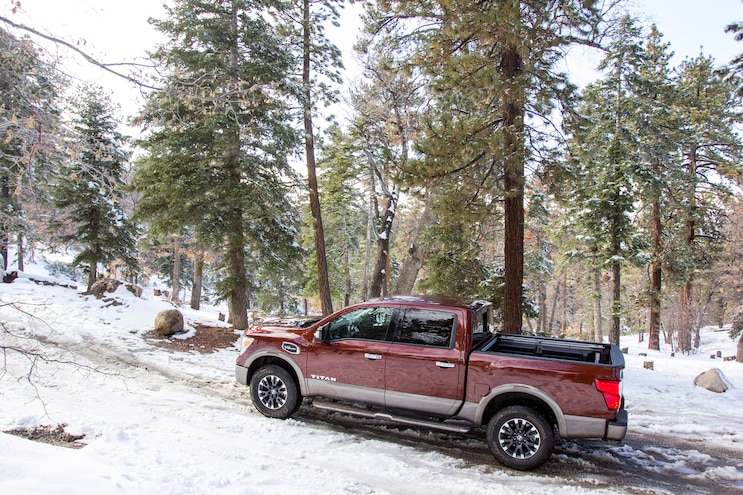 View Photo Gallery | 19 Photos
Photo 2/19   |   2017 Nissan Titan Long Term Report 2
It’s not only the Titan Boxes that we love but the other thoughtful features as well. In addition to the standard bed corner tie-down cleats, the Titan is equipped with Nissan’s Utili-Track rail system. Utili-Track consists of moveable cleats and rails that span the bedsides, face, and floor. We’re also quite fond of the bumper-mounted retractable step. The one thing we wish the Titan had that it lacks is a passive entry button, similar to the doors, on the tailgate. While not a deal-breaker by any means, it would be nice to not have to fumble for the key fob to drop the tailgate, often with full hands.
After nearly 10,000 miles, the Zero Gravity seats are still extremely comfortable and show no signs of wear. While the heating element of the front seats works quite well, we wish the ventilation had a bit more to give at times. The rear-seat heaters are a nice touch, but we too often bump the rocker switch and accidentally activate them.
We’re still learning new things about our truck all the time, and only recently during a brief rainstorm learned that the Titan features automatic windshield wipers. Once we learned this, we started using it more often; being based in the parched desert southwest, however, the opportunities have been few and far between. We’ve also come to really love the adjustable headlights for towing. Gone are the days of blinding oncoming traffic simply because there’s a trailer in tow. And speaking of headlights, the Titan’s LED main beams are fantastic. However, the incandescent fogs and high beams leave a lot to be desired.
Halfway in and we’re still thoroughly in love with the Titan. We look forward to seeing what the second half of the truck’s time with us brings and are already scheming ways to keep it in the fleet once its time is up. 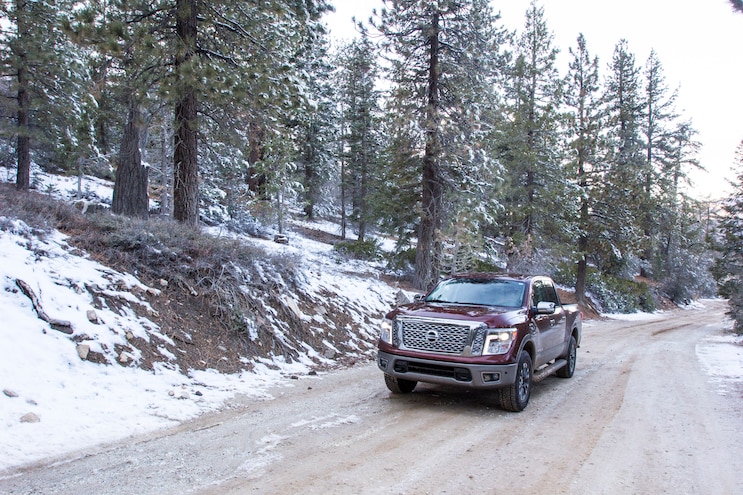 Previous Report(s): March/April 2018
Base Price: $55,850
Price as Tested: $57,995
Long-Term Numbers
Miles to date: 9,554
Miles since last report: 4,878
Average mpg (this report): 14.29
Test best tank (mpg): 17.95 (all highway w/ cruise control)
Test worst tank (mpg): 8.40 (towing 9,000 pounds)
Test Maintenance
5,000-mile oil change and tire rotation.
Test Problem Areas
None
Logbook Quotes
“Just had another Forged Copper Platinum Reserve Titan pull up next to me on the highway, honk, and give a thumbs up.”
“Got stopped at the hardware store again by someone wanting to ask about the truck. People are certainly curious.”
“The 60/40 split rear bench is cool, but it splits on the wrong side. Anyone else with a car seat installed will agree.”
“Service writer at the dealer just told me the oil change will take a little longer while they wait for the ‘big lift’ to become available.”
“This is the first pickup that I’ve had to turn the bass down in. The stereo bumps hard!”

- OF
By Jason Gonderman
794 Articles