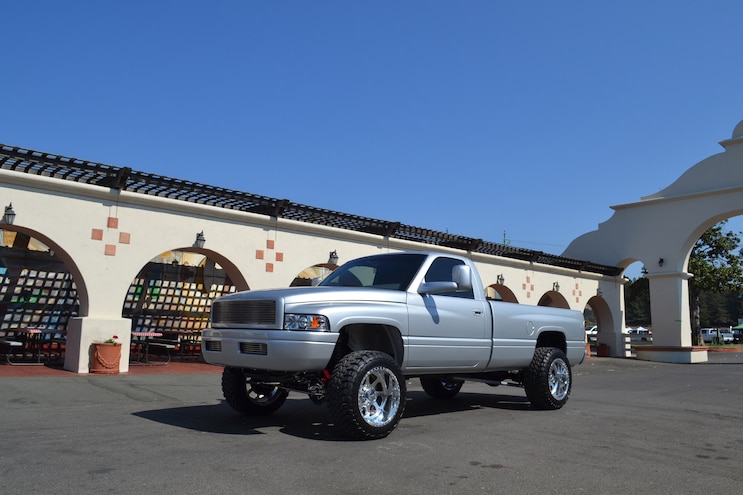 When you think of 20-year-old Dodge Ram pickups, you might envision rusted-out, smoke-belching nightmares that can barely keep up with traffic. That could be why nearly everyone has the same reaction the first time they see Cash Johnston’s ’94 2500 model. “That is a nice Dodge!” is the usual compliment. But the thing admirers might not know is the truck also packs a serious punch beneath its hood.
Cash enlisted Brown's Diesel, in Riverdale, California, to help him build the truck he wanted. The crew at Brown's has many years of experience with the ’94-to-’98 Dodge Ram, and they had the perfect plan to build a powerful and reliable street truck. After Cash brought his project truck in, the 12-valve 5.9L Cummins engine’s oil leaks made it clear that making it reliable had to be handled first. After stopping said leaks, Brown's also replaced the cylinder-head gasket with a 0.020-inch-thick seal, along with ARP 625 studs.
Brown's knew it could make plenty of power with the much-maligned stock P7100 injection pump—but not without upgrading it. The pump was retimed from 12.5 degrees to 20 degrees and fitted with 4,000-rpm governor springs from Pacbrake and 024 delivery valves from Dynomite Diesel Products. Erick Brown from Brown's Diesel also racked the barrels on the pump for maximum fuel. 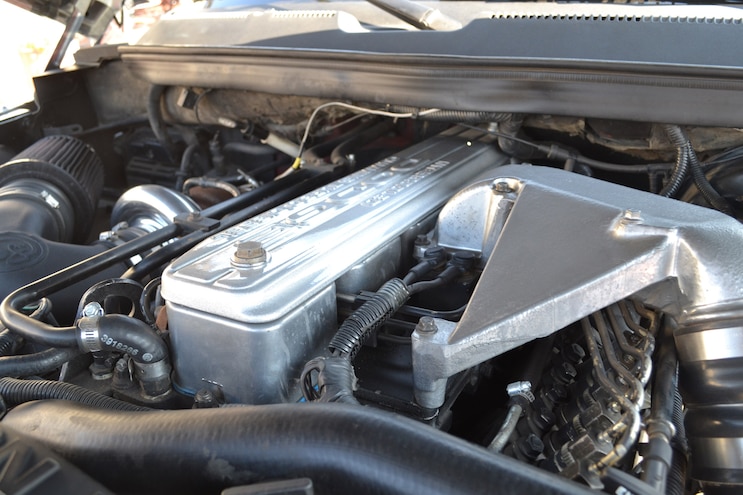 View Photo Gallery | 20 Photos
Photo 2/20   |   Cash Johnston had the stock valve cover painted the same bright silver as the rest of his ’94 Dodge Ram 2500. Although the 12-valve 5.9L Cummins engine only made 160 hp from the factory, it now surpasses that by a long shot with a dyno-proven 630 hp.
“We have a pretty solid 550hp setup for these trucks, but we wanted to push it a little with Cash's ride,” Erick explains. Since the 160hp P-pumps like big injectors, a set of 5x0.018 squirters from F1 Diesel was added. For air, the team selected a Viper 63 turbocharger from Industrial Injection Diesel Performance, which features an internal wastegate, and a high-flowing 68mm turbine wheel.
While unmodified Dodge 47RH four-speed automatic transmissions can handle stock power levels quite well, they need some help as horsepower increases. Since Cash planned on hot-rodding his rig, he again turned to Brown's Diesel to get help building a transmission that would survive. Brown’s achieved this by replacing the Dodge flexplate (which breaks) and torque converter (which slips) with corresponding parts from BD Diesel Performance and Goerend Transmissions Inc., respectively. Brown’s technicians then rebuilt the transmission with only the best parts, including a Goerend valvebody and aftermarket input, intermediate, and output shafts.
Cash chose to buck the trend of huge bolt-on bumpers and mammoth tires and instead went for a clean, smooth, original look. The bright silver paint was applied by Crownover Collision in Bakersfield, California. For many builds of older Dodge pickups, updating the interior is typically the downfall of the project. This was not so for Cash's ride. Vic’s Upholstery, in Tulare, California, stitched up a complete leather interior, including seats and door panels. Instead of the stock shifter, a B&M Pro Ratchet selector mounted on a 3D-printed mount resides in the front seat. 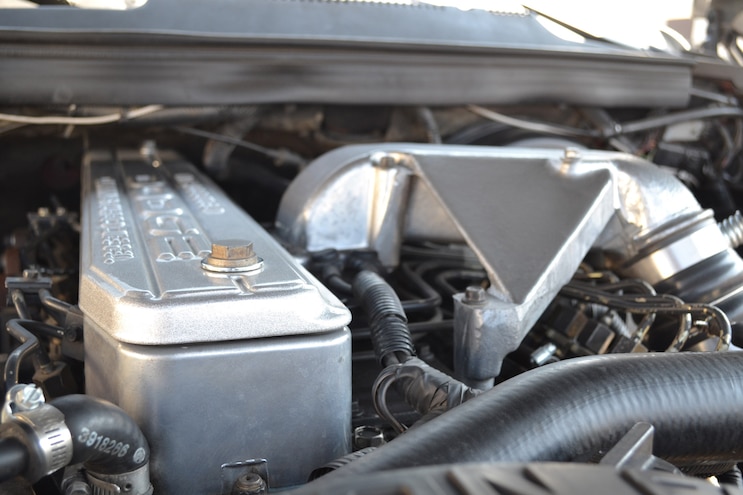 View Photo Gallery | 20 Photos
Photo 3/20   |   The top of the engine is fairly stock, save for a set of 60-pound valvesprings and a set of ARP 625 cylinder-head studs. The fasteners are of vital importance for keeping the engine together at three times the stock boost level.
“To me, all the paint, and leather, it's just how vehicles are built,” Cash says.
"My dad had a blown Camaro, so show cars were common to me, as were racing quads and virtually everything that was fast,” he says. “I knew when I got my license that a fast diesel was what I wanted!” Cash is quick to point out that a truck of this caliber didn't come together without a lot of help. “There are so many people who did great work, and I'd just like to say thanks to them all for helping me build the truck I've dreamed about for years!" 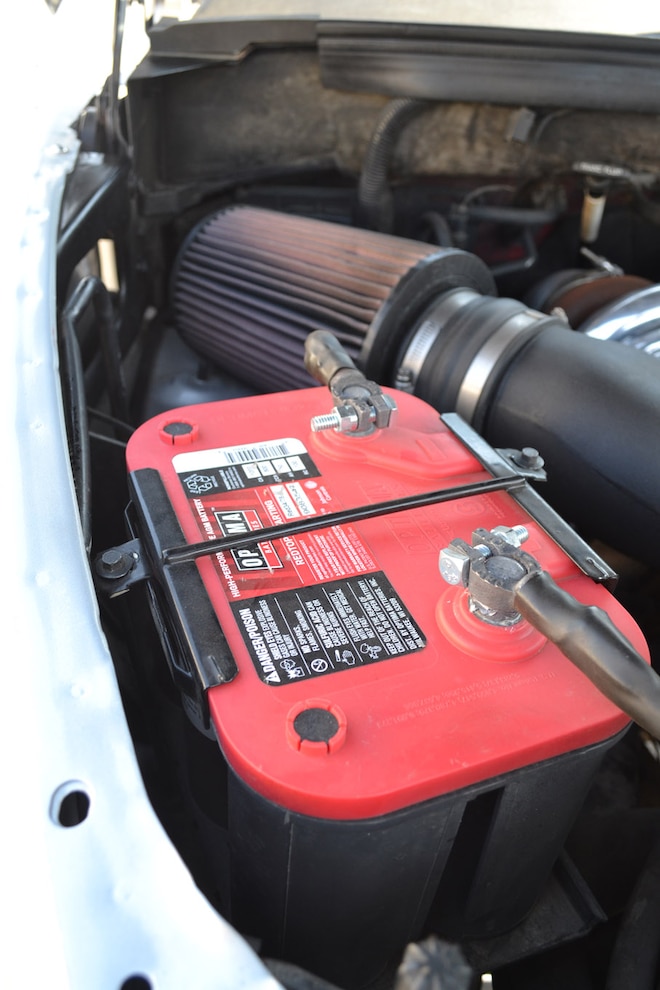 View Photo Gallery | 20 Photos
Photo 4/20   |   Batteries don't often get the credit they deserve. On Cash's Dodge Ram, the messy lead-acid cells were replaced with a set of 800-cold-cranking-amp Optima RedTops. 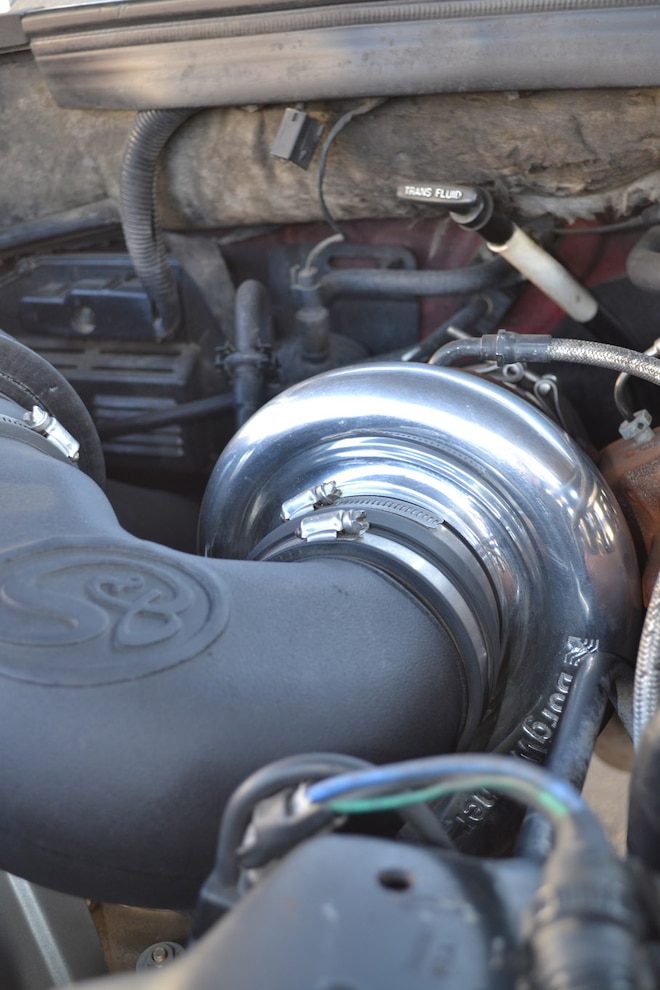 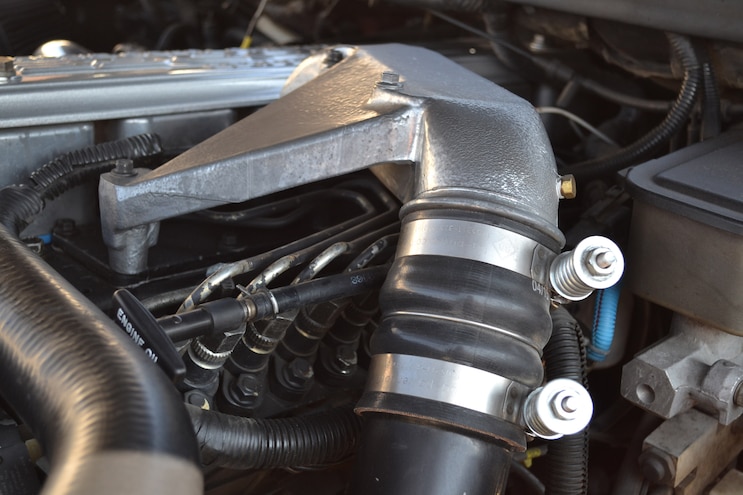 View Photo Gallery | 20 Photos
Photo 6/20   |   There's a lot of magic going on inside the stock-appearing P7100 injection pump, thanks to the hard work of Brown's Diesel. The original governor springs were replaced with 4,000-rpm pieces from Pacbrake, it now has Dynomite Diesel Products’ 024 delivery valves, the barrels have been racked, and the stock rack-travel plug is replaced with a Mack unit. All the pump tricks and a big bump in timing are major contributors to the truck being able to bust through the 600hp ceiling. 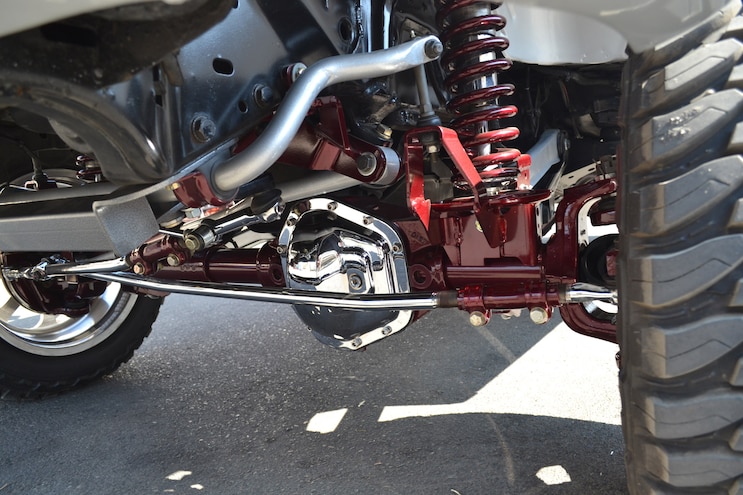 View Photo Gallery | 20 Photos
Photo 7/20   |   Cash's Dodge Ram 2500 has probably one of the nicest undercarriages we've ever seen, thanks to creative show car–style suspension work. Though many of the components are stock, the axles are rebuilt and the suspension is powdercoated maroon and bright silver. 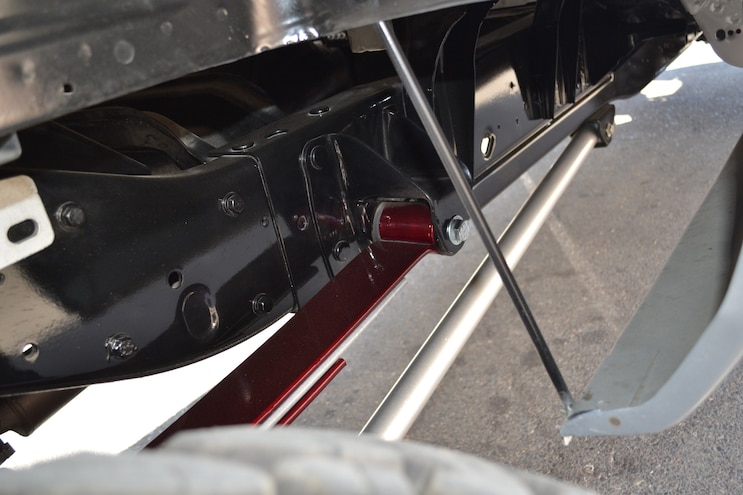 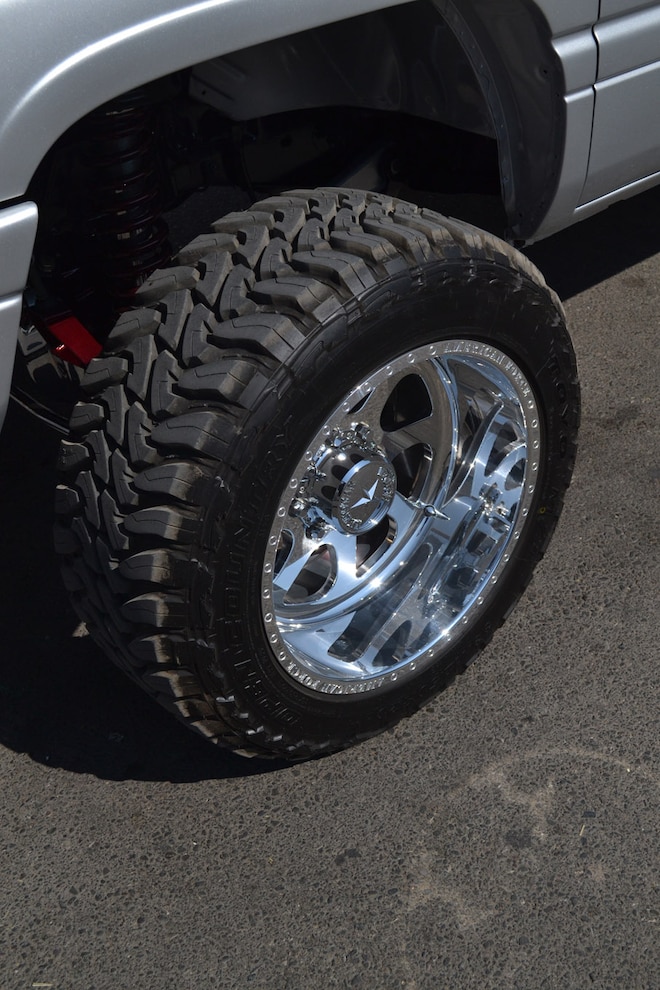 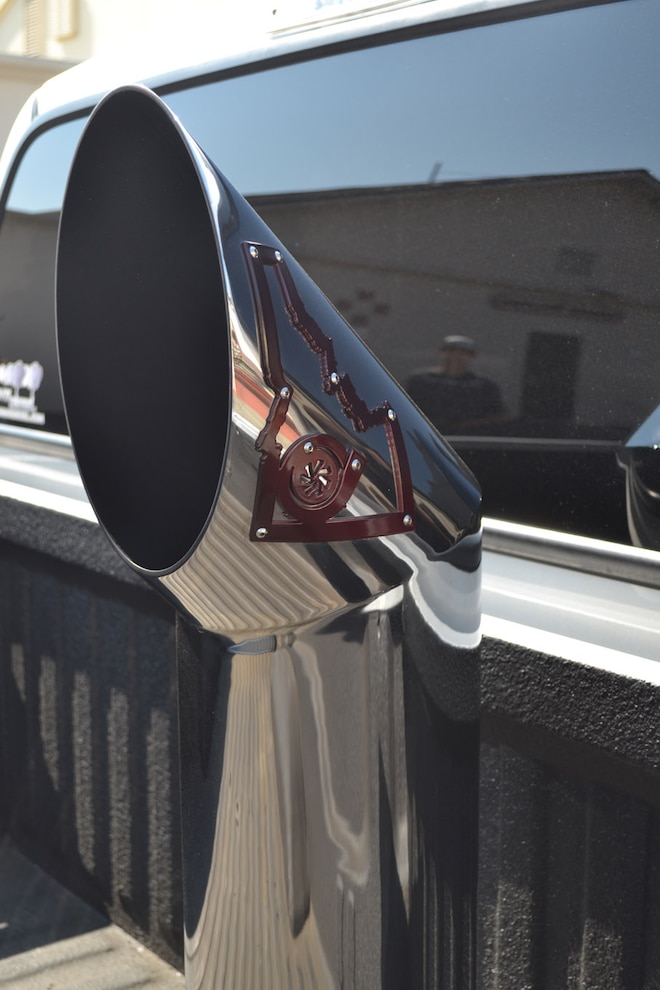 View Photo Gallery | 20 Photos
Photo 10/20   |   A 4-inch downpipe was already on the truck, but for the rebuild, Cash chose to extend the exhaust through the bed and into a 208 Diesel 8-inch CAT stack. 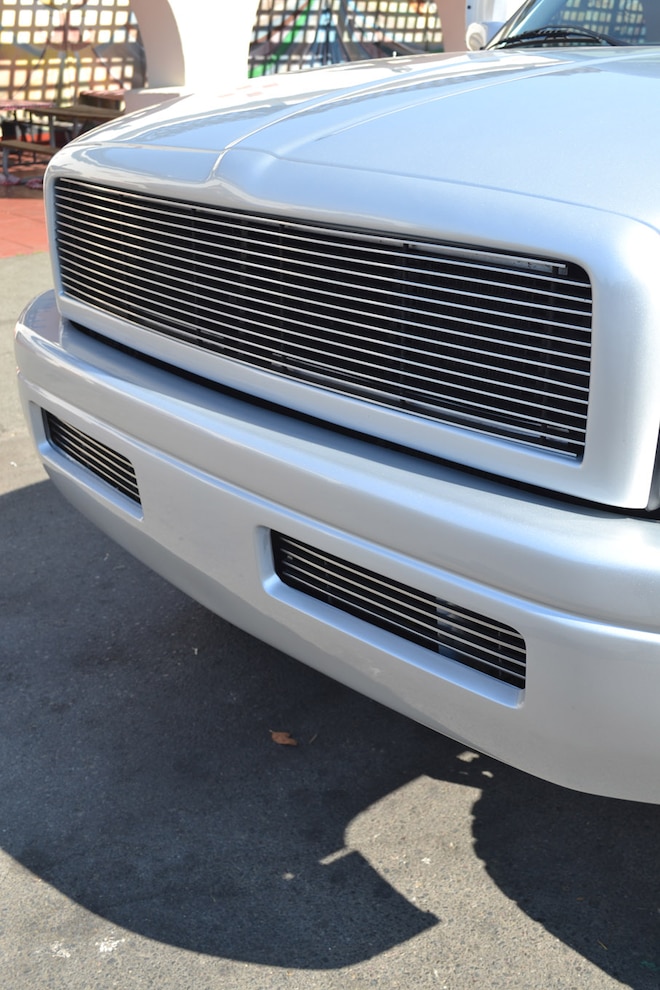 View Photo Gallery | 20 Photos
Photo 11/20   |   We wondered why Cash's rig looked so smooth compared to other early Dodge Rams we've seen, but then we noticed why: The custom horizontal grille gives the truck a distinctly modern feel. View Photo Gallery | 20 Photos
Photo 12/20   |   Another subtle but substantial change is the mirrors, which come from a third-generation Dodge and are painted to match the body. 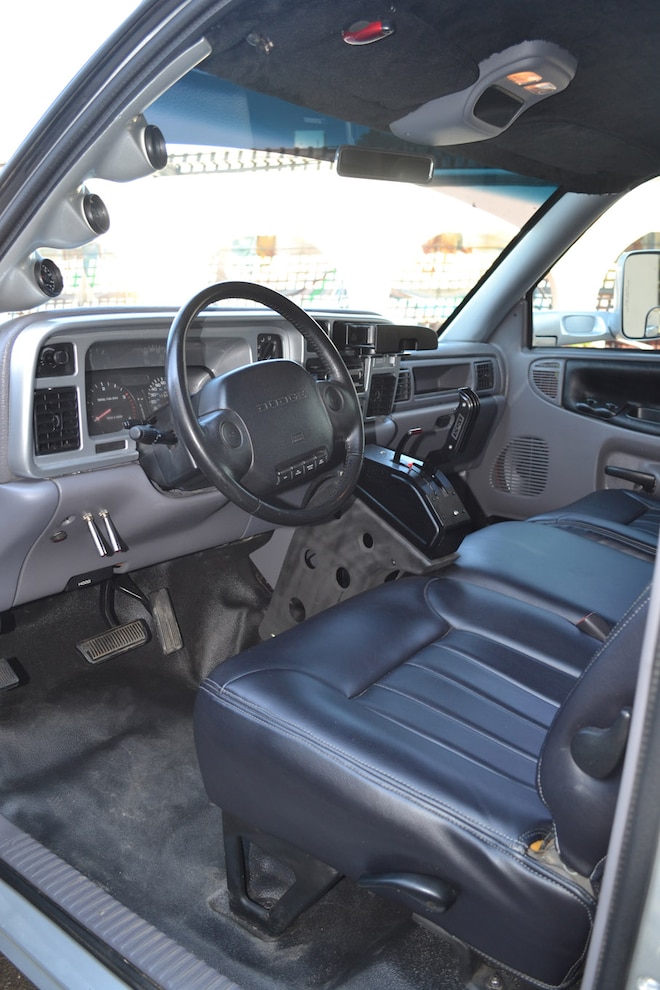 View Photo Gallery | 20 Photos
Photo 13/20   |   The interior is one of the nicest we've seen in a second-generation Dodge Ram and must be seen to be believed. From the complete repainting of all the plastic pieces to the custom leatherwork, it's truly show-car quality. 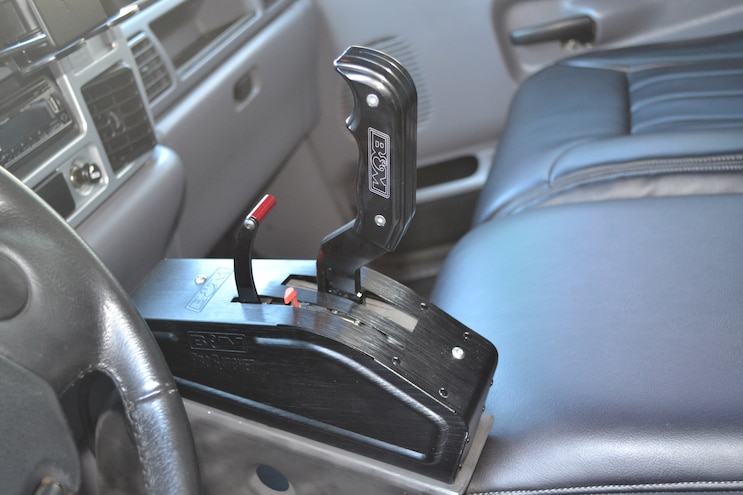 View Photo Gallery | 20 Photos
Photo 14/20   |   One of the slickest pieces in the interior—and a welcome addition to a diesel pickup—is a B&M Pro Ratchet shifter. This allows Cash to manually control the transmission without worrying about missing a shift.