America’s First Freeway: The Arroyo Seco Parkway, aka, the 110 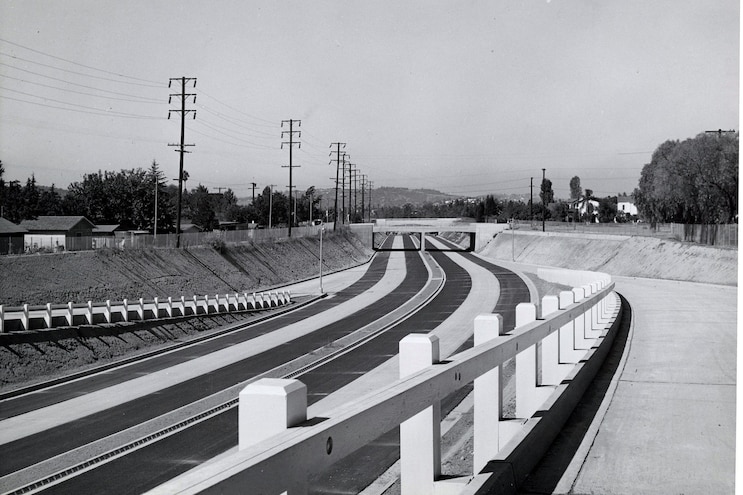 The first freeway in the United States is the 110 in Southern California, which began life as the Arroyo Seco Parkway. Caveat: there is a certain dependence on how the term “freeway” is defined, but more on that in a moment. In the meantime, let’s go with the accepted wisdom that “the 110” was the first and see where it takes us.
If we started at the northern end, we’d be in Pasadena, home of the Rose Bowl, those geeks from The Big Bang Theory, the Jet Propulsion Laboratory, CalTech, and the Art Center College of Design that has given us several influential automotive stylists like Chris Bangle (BMW), J Mays (current Ford F-150, among many others), Larry Shinoda (Corvette Stingray), Freeman Thomas (Audi TT), and Frank Stephenson (Ferrari, McLaren). However, with the exception of the Rose Bowl Stadium (completed in 1922), none of those things (or people) was around when the Arroyo Seco Parkway was conceived and built; the first survey was carried out in 1895.
“Arroyo seco” means dry riverbed. Pasadena’s seasonal gulch was, in fact, nature’s own freeway back in the days of wagon trains. During the warmer and dryer months, it would provide a shortcut for wagons between Pasadena and Los Angeles to the southwest. The road was created to run parallel with it. 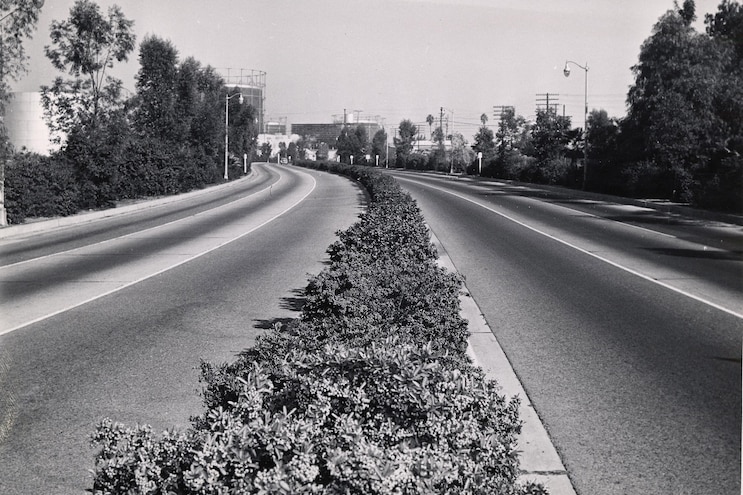 View Photo Gallery | 3 Photos
Photo 2/3   |   Arroyo Seco Parkway Image
After a raised wooden bicycle path came and went, a thoroughfare for the newfangled horseless carriage began to take shape in 1924. Construction began on March 22, 1938, under the direction of Spencer V. Cortelyou and A.D. Griffin (district chief engineer and design engineer, respectively). Although the first part was open to traffic later that year, the full 8-mile stretch had its official grand opening on December 30, 1940, complete with a Rose Parade queen to cut the ribbon.
On its way south, it goes past what is now Dodger Stadium, and Arroyo Seco Parkway originally ended in downtown Los Angeles. This city has a terrible reputation for demolishing nice old things and replacing them with horrible modern things—paving paradise and putting up parking lots, so to speak. Luckily, that hasn’t happened with California State Route 110.
For example, on the northbound side are the four Figueroa Street tunnels that date back to the time of the Parkway’s inception and have impressive Art Deco facades. If you ever see the movie Duel—one of Steven Spielberg’s earlier efforts featuring Dennis Weaver as a regular car driver terrorized by a monstrous Peterbilt tanker truck—the tunnels show up at the very beginning.
The road has since received accolades that should ensure its preservation, such as State Scenic Highway, National Scenic Byway (one of only three in California), and National Civil Engineering Landmark. It’s also been included in the Register of Historic Places. What makes this road so special is that it set the template for freeway construction. Much of it is six lanes and was originally designed to take 27,000 vehicles each day, but now has to cope with more than four times that amount. 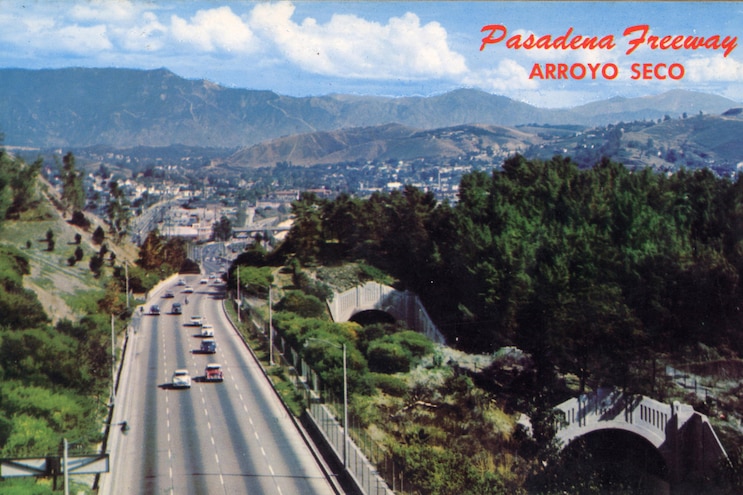 View Photo Gallery | 3 Photos
Photo 3/3   |   Arroyo Seco Pway With Art Deco Tunnels
A freeway is defined as a multiple-lane divided highway, with access and exits provided by clover leaf–style ramps—no intersections like those found on surface streets, with traffic lights or stop signs. And it won’t have tolls, hence the “free” component. Now if we were taking about the first interstate freeway, that would be a different matter (Pennsylvania, Missouri, and Kansas are all in the running there). But as a state freeway, Arroyo Seco Parkway/Pasadena Freeway has a legitimate claim to be the first. It merged into the famed Route 66 for a time and has since been extended to become part of the larger freeway system that crisscrosses greater Los Angeles and includes I-5 and I-10.
These days, the 110 doesn’t just connect parts of the geographical area, it also links various episodes in the city’s history, stretching past the Los Angeles Memorial Coliseum (where the summer Olympics were held in 1932 and 1984) and Watts Towers, until it reaches the Port of Los Angeles in San Pedro, which explains why it is sometimes called the Harbor Freeway. Those first 8 miles, though (well, 8.162 to be exact), are being referred to as the Arroyo Seco Parkway once again, a reminder of how long Los Angeles in particular and America in general have been in love with the automobile.