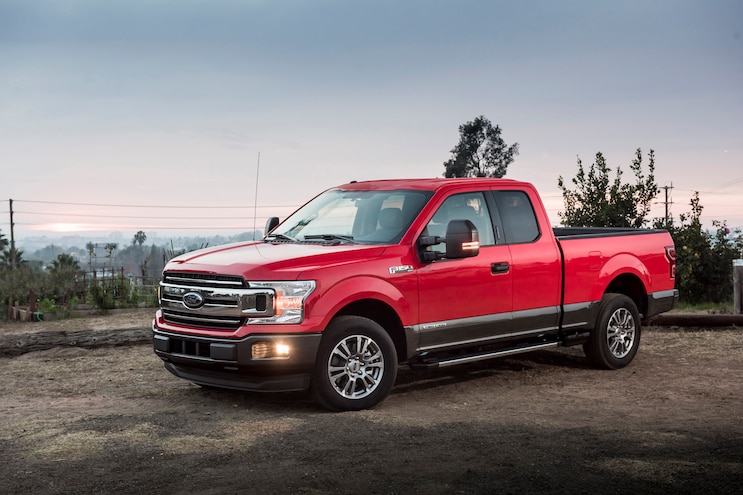 Ford rewrote the pickup playbook three years ago by transforming its F-150 bodies from steel to aluminum—a bit more costly and more challenging to build and repair, but the resulting weight savings increased payload and tow ratings. Continued strong F-150 sales show that it was a risk worth taking, even though no competitor has yet followed suit.
These lighter, more load-capable trucks were freshened and updated with new features and improvements for ’18, and now Ford adds a new twist with its first-ever light-truck diesel engine, a 250hp, 440–lb-ft 3.0L V-6 that is EPA rated at a class-bashing 22 city/30 highway/25 combined mpg in a Lariat SuperCab 4x2 and numbers dropping to 20/25/22 with four-wheel drive. 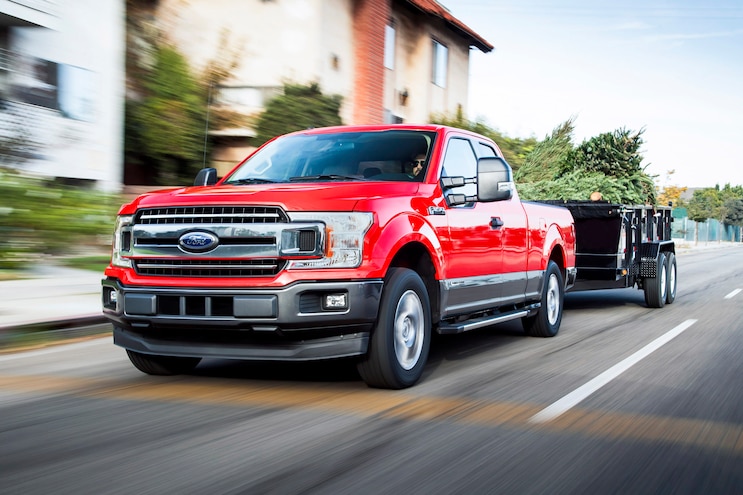 View Photo Gallery | 6 Photos
Photo 2/6   |   F 150 Diesel Hauling
While this new Power Stroke V-6 is a derivative of one built at Ford’s Dagenham engine plant in the United Kingdom, it shares “commercial-grade” technology with the F-Series Super Duty 6.7L Power Stroke diesel. Its engine block is compacted graphite iron, which is lighter and stronger than conventional gray iron. The crankshaft is forged steel, its 29,000-psi high-pressure fuel injection delivers optimum output and efficiency with reduced noise, and its turbocharger’s vanes are variable geometry for better power and response. It also boasts dual fuel filters, a two-stage oil pump and a cast-aluminum oil pan. The engine’s 250 peak ponies arrive at 3,250 rpm, while its muscular 440 lb-ft of torque begins at a low 1,750 rpm.
By comparison, the ’18 Ram 3.0L EcoDiesel V-6, coupled to an eight-speed automatic, delivers 10 fewer horses and 20 fewer lb-ft, with 21 mpg city and 29 highway with two-wheel drive and 19/27 with four-wheel drive. And since the truck business is all about one-upping the competition, we’re guessing that GM might find a way to top Ford’s ratings by at least a bit when its ’19 Chevrolet Silverado 1500 diesel is revealed. 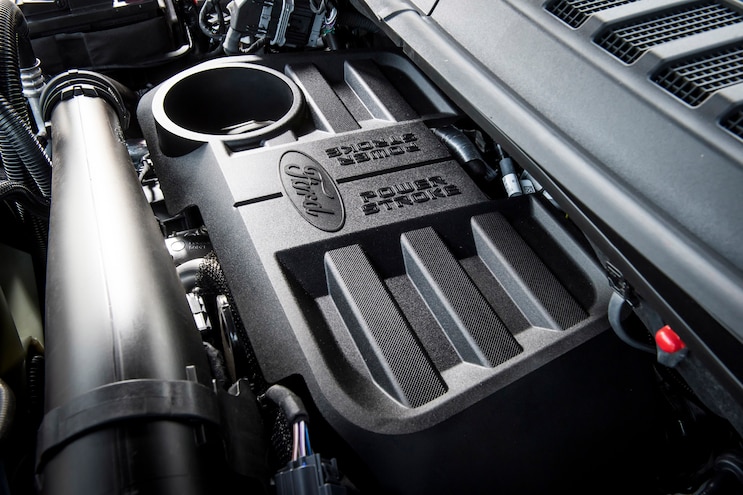 View Photo Gallery | 6 Photos
Photo 3/6   |   F 150 Diesel Power Stroke
At Ford’s invitation, we traveled to Denver to test the ’18 F-150 diesel and found the late-April weather unseasonably cold and wet. All the better for off-roading, we decided, so we began at a vast sand (and mud) pit, where Ford had laid out a challenging off-road course. It included steep up- and downhills, deep puddles, and a smattering of rocks, logs, and railroad ties strategically placed to demonstrate our FX4 test truck’s high and low ranges, hill descent control, 360-degree surround-view cameras and tire traction, all in varying depths and consistencies of slick, greasy mud. The truck passed with flying colors. Not much to report on its dieselness there, however, except for the engine’s strong, ready torque.
Next, we drove an F-150 SuperCrew loaded with three adults and a 1,000-pound payload of lumber in its 5.5-foot bed on a 22-mile, mostly uphill drive that ended at 8,888 feet of elevation. Beyond the Power Stroke’s ever-present torque and its 10-speed automatic’s near-imperceptible shifts, we were greatly impressed by its very undiesel-like silence. Standing outside next to it, you can tell it’s an oil-burner; on the road, inside its tight, quiet cabin, you would never know. 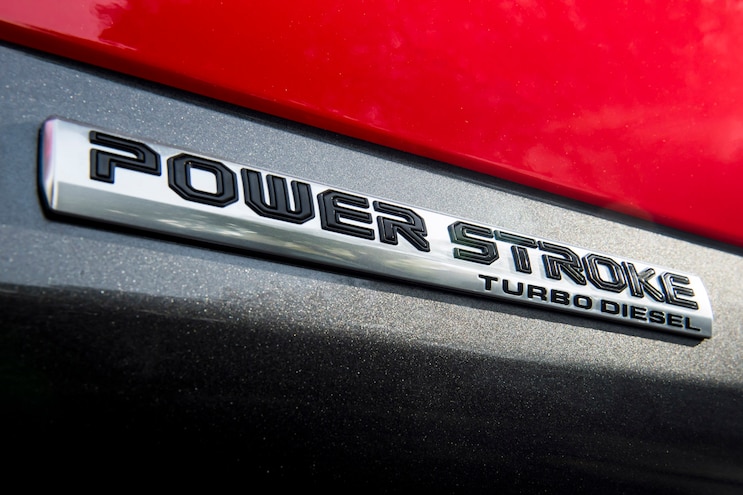 View Photo Gallery | 6 Photos
Photo 4/6   |   F 150 Diesel Emblem
Ford engine supervisor Anita Bersie (our third occupant) said it met very stringent noise requirements both inside and outside the cab as well as pass-by and drive-through tests. She added that beyond meeting very difficult targets for performance, efficiency, and emissions—U.S.-market diesels must be exactly as clean-running as gas engines in both EPA testing and real-world operation—its toughest development challenges were overall noise, vibration, and harshness; cooling; and durability, because hard-working diesels generate a lot of heat.
Driving fairly quickly up a twisty two-lane mountain road and applying multiple wide-open-throttle accelerations to test passing performance, we reached that altitude with 16.6 mpg on the trip computer. Then the downhill run (mostly coasting and braking) averaged a stellar 40.2 mpg. The truck handled well for its 5,000-plus-pound weight, and our only disappointment was the passing tests (from 60-65 mph between 6,000 and 8,000 feet of elevation) typically resulting in not a lot of noticeable acceleration following near-imperceptible downshifts. 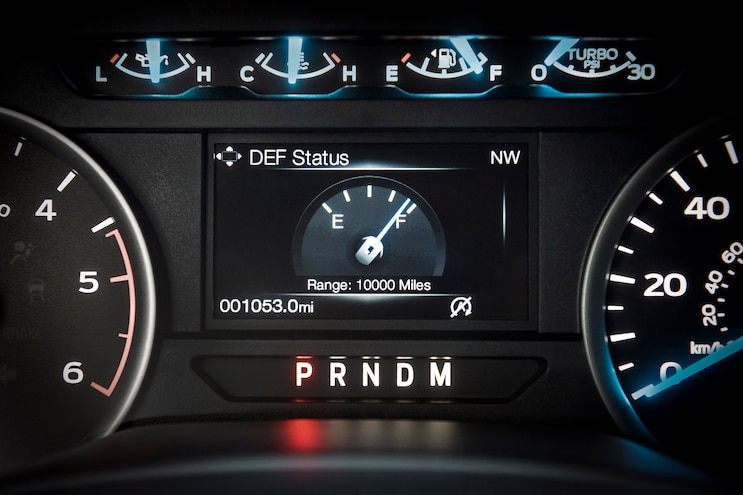 View Photo Gallery | 6 Photos
Photo 5/6   |   F 150 Diesel Instrumentation
We then took on an 8.8-mile urban fuel-economy run in a Power Stroke 4x2. Driving normally, our co-driver logged a respectable 26.7 mpg (calculated, not indicated). Driving a bit more slowly and fuel-consciously, your author managed 30.3 mpg, which we thought was good, until we heard that some scored in the 31-34-mpg range. Then we averaged 20.9 mpg driving an unloaded Platinum 4x4 more aggressively on local roads. Its low-end acceleration was very strong even at Denver’s mile-high altitude, and we were pleasantly surprised that its comprehensive Driver Information Center even offered a Diesel Exhaust Fluid (DEF) gauge that showed a range to refill of 7,000 miles beyond the 1,758 miles already on that truck’s odometer.
We rounded out our experience towing a 6,240-pound box trailer with a King Ranch FX4 in Tow/Haul mode on a 23.5-mile loop. Launching it from stops on wet surfaces in two-wheel drive sometimes resulted in expectable rear-wheel spin, but we found this rig more than capable accelerating, cruising, and stopping from both low and highway speeds. However, while Bersie pointed out that one primary advantage of the diesel over gasoline engines is its fuel efficiency when towing and/or hauling heavy loads, this mile-high tow test resulted in a somewhat disappointing 10.7-mpg average. We’ll reserve final judgement until after we get some real towing miles under our belt with Ford’s new diesel mill.
We’re told that when ’18 Power Stroke diesel F-150s begin arriving at dealerships, their price premiums over comparable gas-powered trucks will range from about $4,000 over a 2.7L V-6 EcoBoost Lariat to about $2,700 over a 3.5L EcoBoost V-6 in higher-level trims. Its max payload rating is 2,020 pounds in XL and XLT fleet trucks (1,940 pounds in retail models), and its tow rating reaches 11,400 pounds. It should definitely deliver better fuel economy in typical work and play situations, but whether it makes good sense for you depends on your priorities and payloads, your local diesel fuel pricing, and how many years you plan to own it. 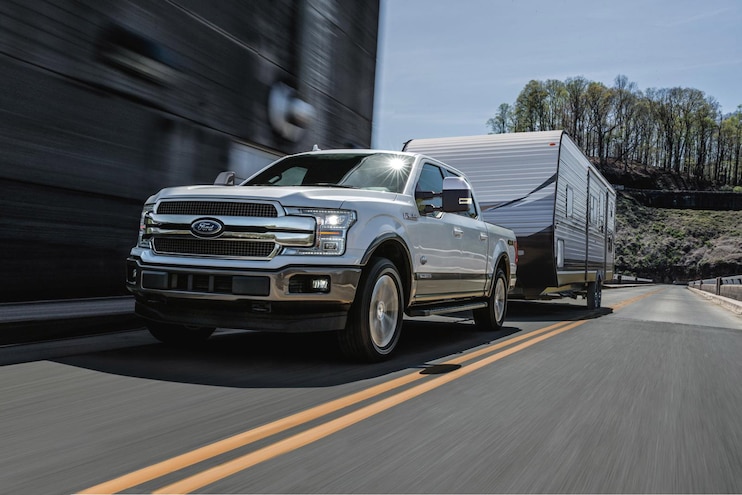