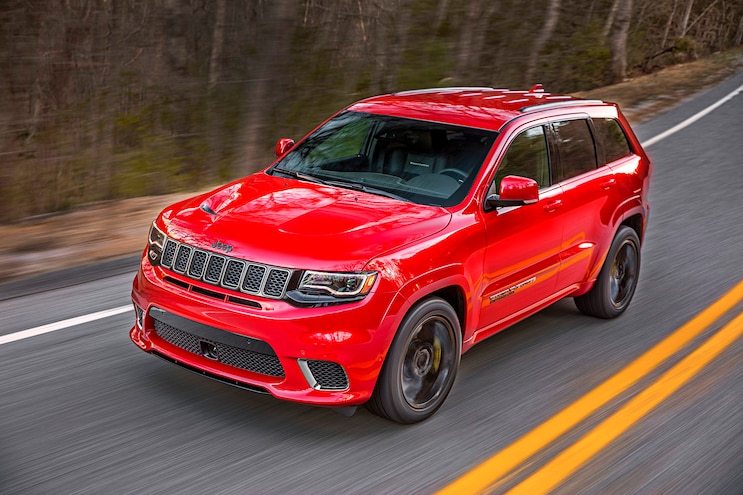 There is no better time than the present to be a horsepower junkie. Fuel prices are still relatively low, auto manufacturers are profitable again, and vehicles that excite the senses are back in favor. Sure, a few of the old guard are sticking with building boring, vanilla vehicles, but for the most part, each company has something ludicrous in its current lineup.
The folks at Fiat Chrysler Automobiles are among the most recognized for building wildly powerful cars, trucks, and SUVs. The company’s SRT division has been cramming large-displacement V-8 and V-10 engines into things for decades. This group was responsible for the Viper, as well as the Viper V-10–powered Ram SRT-10. They’ve dropped muscular V-8s into the Challenger, Charger, Magnum, and 300, along with turbocharging and adding a large spoiler to Neon. Long held as the quickest accelerating of the SRT family was the Jeep Grand Cherokee, which thanks to its wide tires and all-wheel-drive system, could outlaunch a Viper from a standstill—or so legend had it, anyway. 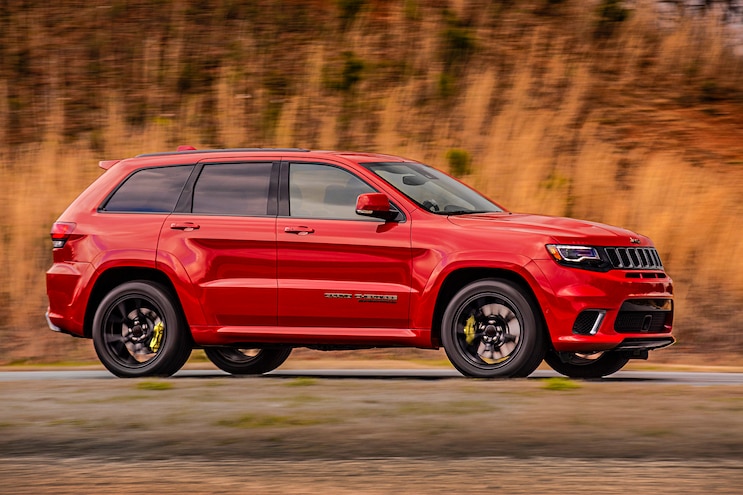 View Photo Gallery | 35 Photos
Photo 2/35   |   2018 Jeep Grand Cherokee Trackhawk First Drive
Fast-forward a few years and we find the birth of the Hellcat. First applied in the ’15 Charger and Challenger, this supercharged 6.2L V-8 is a fire-breather. The engine churns out a monstrous 707 hp and 650 lb-ft of torque. In these rear-drive cars, the Hellcat engine was a burnout machine and traction nightmare, as one can imagine. This left us adrenaline junkies waiting and wanting for a Hellcat version of the all-wheel-drive Grand Cherokee SRT. And for ’17, our prayers were answered in the form of the Trackhawk. 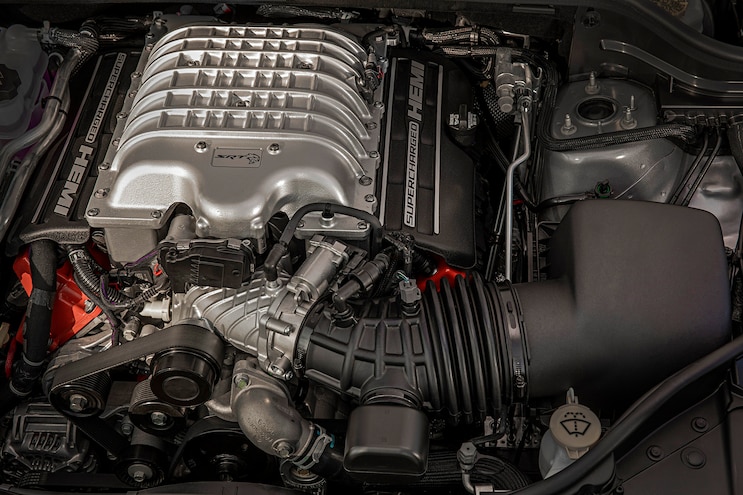 View Photo Gallery | 35 Photos
Photo 3/35   |   2018 Jeep Grand Cherokee Trackhawk First Drive Hemi
The Grand Cherokee Trackhawk’s résumé is quite impressive. Its supercharged 6.2L V-8 engine lays down 707 hp and 645 lb-ft of torque, making the same horsepower and just 5 lb-ft fewer than its Hellcat brethren. In the Grand, this engine is tuned for more civility, with a smoother idle and slightly subdued roar. Along with claiming the title of most powerful SUV (the next closest as of writing is the Lamborghini Urus, with a twin-turbo 4.0L V-8, makes a “modest” 641 hp), the Trackhawk is also the quickest utility vehicle, reaching 60 mph from a standstill in just 3.5 seconds. The Trackhawk will pass through the quarter-mile in 11.6 seconds and is electronically limited to a top speed of 180 mph.
We spent a glorious day behind the wheel of this five-passenger monster punishing the pavement in Maine and New Hampshire, including a quick stop off at newly minted Club Motorsports track in Tamworth for a few laps. The first thing we noticed pulling out onto the motorway was just how civilized 707 horses could be. With a light tip of the throttle, the heavy SUV steadily chugged along at the posted speed limit, doing so quietly and with little indication of what was lurking under the bonnet.
When the road opened up, however, we threw the right foot down and were immediately greeted with a banshee howl that could scare the undead. The eight-speed TorqueFlite 8HP95 transmission quickly drops gears while the supercharger ramps up boost to nearly 12 psi, sending occupants firmly into the Jeep’s bolstered seats. The acceleration is addictive, and it took every ounce of restraint in our body not to push the Trackhawk’s speedometer too deep into reckless driving territory on public roads. Thankfully, the midway point of our day’s drive was just what we needed: a private track. 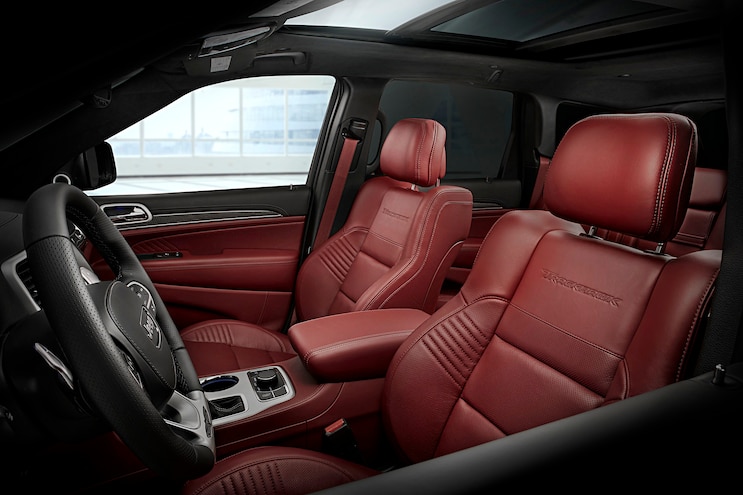 View Photo Gallery | 35 Photos
Photo 4/35   |   2018 Jeep Grand Cherokee Trackhawk First Drive Interior
With helmets on, we took to the raceway, switched the Selec-Track system to Track, and let the Grand eat. Riding shotgun with us were professional drivers from SRT, though this time their duty was to help us drive as quick as possible, not just be the typical fun-sponge found on these types of programs. We’re admittedly track novices, being truck folks and all, but by the end of the afternoon we were nailing apexes while pushing the 5,300-pound SUV harder and faster than we ever thought possible.
Our time with the Grand Cherokee Trackhawk was short, but the couple hundred miles we were able to spend behind the wheel were plenty to give a deep appreciation for the true insanity hidden beneath the skin. With a price point that tops out below six figures and performance that puts the European performance brands to shame, it’s hard to imagine how anyone in the market could pass up the Trackhawk. 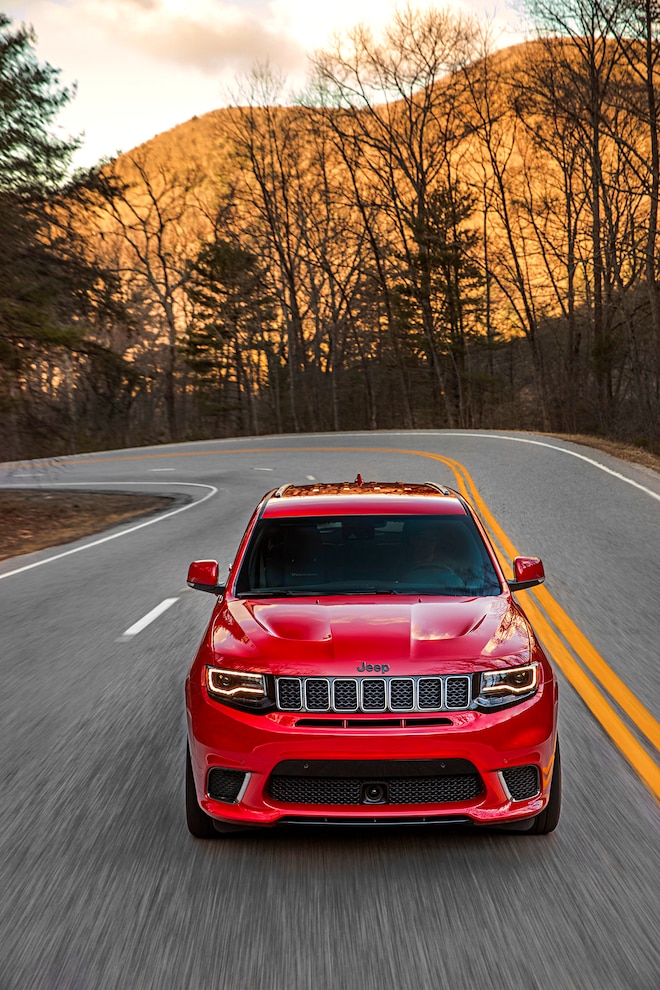