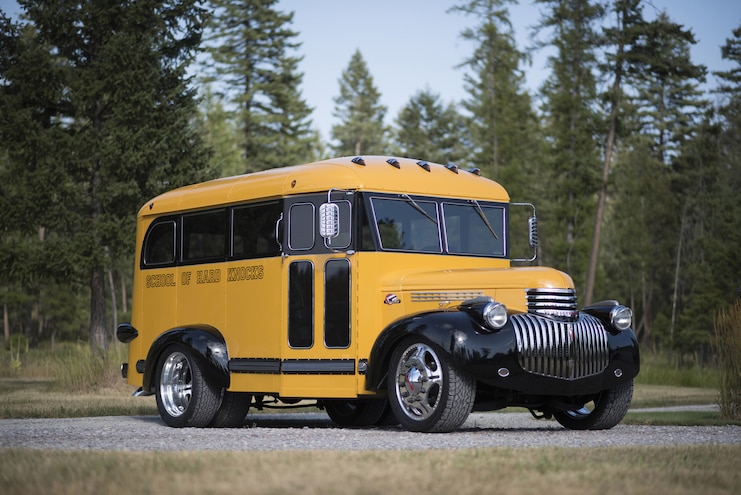 We challenge you to try to look at the following photos of Curtis and Staci Ost’s ’41 Chevrolet school bus and not smile. We’re 100 percent sure you’ll fail. “Why,” you ask? Well, we think the number one reason is because a school bus is one of those vehicles everyone relates to. Couple that with the fact that the Ost’s rig is leaps and bounds better than the rest, and it’s easy to understand why we think this way.
We had all kinds of names for the trundling yellow machines when we were kids. They were cheese wagons, loser cruisers, and worse, but then again they were never like this one. Our school shuttles never had the right stance, look, or amazingly thoughtful hot-rod touches—and they never had an interior like this one. If we’d ridden to school on this bus we might still be there, just to cruise the streets in this rig twice a day. But we digress.
Curtis provided possibly the greatest answer in history when we asked why he set his sights and considerable talents on a ’41 Chevrolet school bus.
“I have had street rods and hot rods over the years,” he explains. “My wife, who is a school bus driver, asked when I was going to build her something, and one of the options she gave me was a bus.” As so often happens in situations like this, fate intervened and clearly set the course. “A couple of days later, my wife said a friend of mine about five miles from our house took this bus in as scrap,” Curtis laughs. “It had been turned into a motorhome, there was an old WaveRunner hanging off the back, it had a smokestack coming out of it, and someone had swapped a ’50s-era I-6 gas engine into it.” 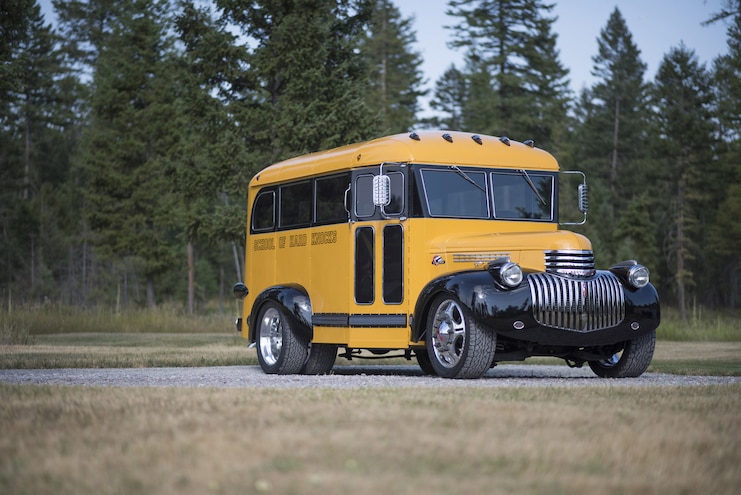 View Photo Gallery | 119 Photos
Photo 2/119   |   This is one of the most unique and awesome vehicles that has ever hit the pages of Diesel Power. The ’41 Chevrolet school bus has been massaged, altered, and repowered with a 5.9L Cummins engine and Allison transmission.
Structurally sound for the most part, the bus did not require a huge amount of repair. But despite its soundness, Curtis’ design ability and metalworking skills are all over this thing. He handmade the rear and side doors (they were both rotted) and applied his talents to making things look right. “I extended the side panels about 6 inches to give the bus a lowered look,” Curtis explains. “The front fenders are an interesting story. In order to get the look right and fit the wider tires, I bought a ’41 ¾-ton truck cab that had a front clip on it. I took its fenders and widened them about 4½ inches. Then I used the original front fenders on the bus to make the rear fenders. I feel like they look stock, and most people have no idea.”
Those rear pieces were not created without trouble, though. The Alcoa 22-inch custom aluminum wheels were not on schedule, so Curtis contacted the manufacturer and requested the dimensions. “I called, got the measurements, and made the fenders. When I hung them, they were more than an inch too narrow, so I took them off and remade them,” he says. The last major one-off piece on the body (among the hundreds we could point out) is the taillights. Using ’41 Chevrolet truck headlight buckets, Curtis didn’t know if the fit would be right. “My wife saw them and thought they looked too big, and I was kind of nervous about that as well,” he explains. “I liked the way they looked but was concerned about finding a lens that would fit. A friend was there when I was talking about this, and he came back 30 minutes later with some lenses from an early-’60s Ford Galaxie, and they fit perfectly. Problem solved.” 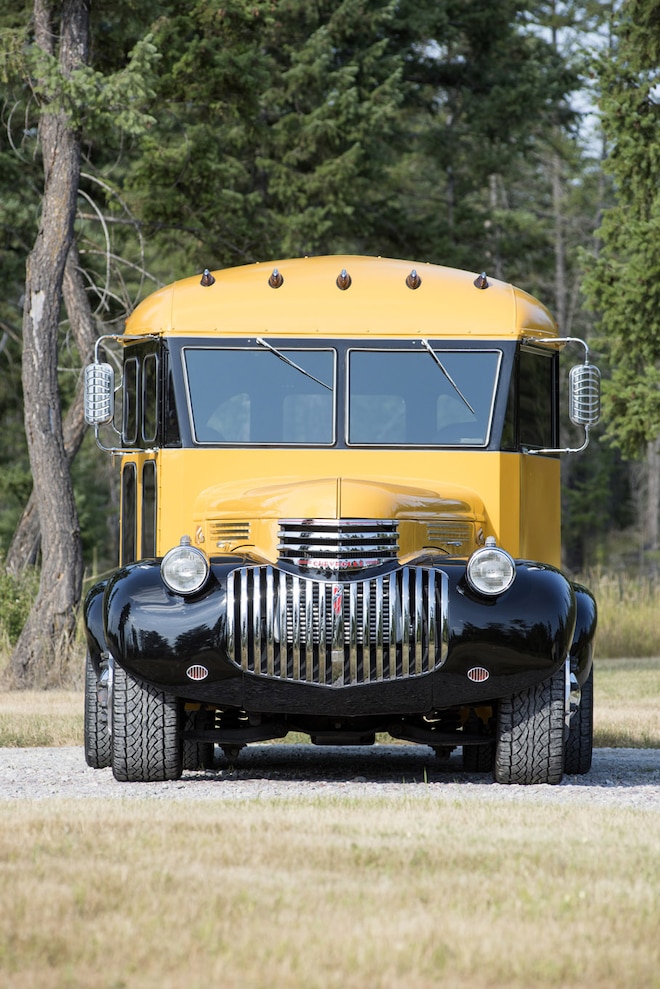 View Photo Gallery | 119 Photos
Photo 3/119   |   While today’s trucks have style, vehicles from the early ’40s had style. The widened front fenders are essential to keeping all that big front rubber under wraps and the proportions of the bus correct.
The drivetrain in this classic is probably the componentry of most interest to Diesel Power readers. The idea was not to build some tire-smoking hot rod. Instead, Curtis wanted a reliable cruiser that could be taken to shows and pull a trailer when needed. Prior experiences with 12-valve 5.9L Cummins engines led Curtis to choose the venerable I-6 powerplant for the bus. “The engine is really close to stock,” he says. “We get more than 20 mpg on the highway, and we are able to tow our trailer with it as well. I had done Cummins swaps previously, and it made the most sense for this build. I actually used the rear suspension and axle from the same truck I bought for the engine.” Outside of a simple fuel plate modification and a freer-flowing air intake, the engine is stock. The transmission is an Allison four-speed automatic accompanied by a torque converter with a lower stall speed. While the bus weighs 8,100 pounds, it is not nearly as heavy as the loads the Allison was used to moving, so a slightly tighter converter helps improve fuel mileage and drivability. The rear end is the Dana 80 from the Dodge truck that provided the engine to the project.
With comfort and reliability critical to the build, the front suspension is an independent setup from a ’70s Chevrolet motorhome. Amazingly, the majority of the ’41 Chevrolet bus frame is original. Since the bus spent most of its time in Colorado, that’s an interesting footnote.
Curtis designed the interior for maximum fun. There are swiveling captain’s chairs in front and a wraparound bench in the back. “I made the rear seat frame, and when the interior shop got it, I asked them to make it like an old diner seat,” Curtis says with a laugh. “This is not filled with foam. It has metal springs in it; when people sit on it, they immediately understand and feel the old-time style of it. The guys did it exactly the way I wanted.”
Curtis and Staci have exactly what they want, a fun and functional piece of Americana they can enjoy however they please. “We nicknamed it ‘Smiley,’” Curtis says. “People cannot look at it, see it on the street, or peek at it when we are at a show without smiling. It’s the best part of owning something like this. It brings people a lot of joy, and that’s really my favorite thing about it."
Curtis can downplay his design and metalworking skills with us all he wants. This ’41 Chevrolet is amazing on every level. 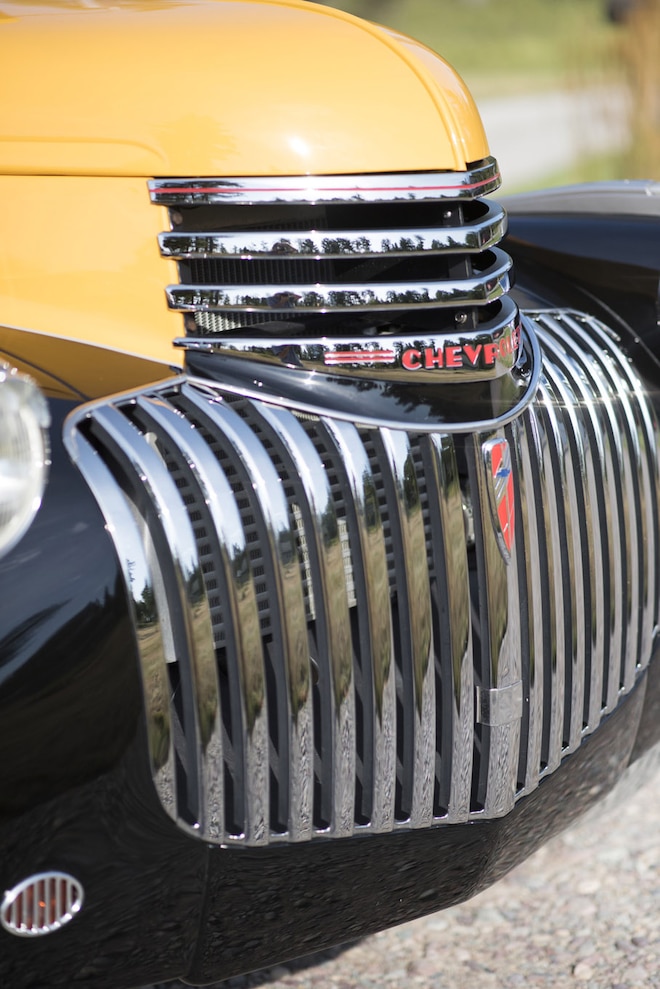 View Photo Gallery | 119 Photos
Photo 4/119   |   If this grille could talk! When you consider that elements of the body are 77 years old, the machine becomes even more interesting. The grille has seen the harshest winter storms and the most sweltering summer days. Today, it’s a pampered piece. View Photo Gallery | 119 Photos
Photo 5/119   |   Referring to an old school bus as a hot rod certainly is odd, but look at how Curtis engineered the look and stance of this rig! As it sits on custom 22-inch Alcoa wheels and a combination of old Chevrolet and Dodge suspension components, we think he definitely nailed the look. 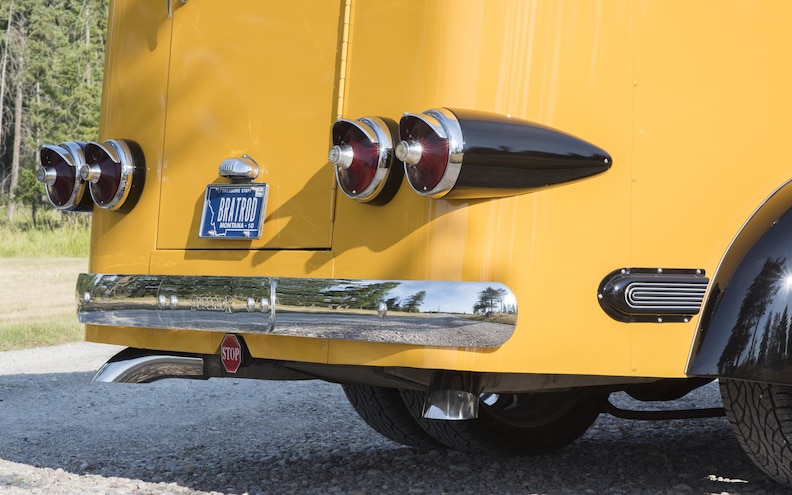 View Photo Gallery | 119 Photos
Photo 6/119   |   While most readers may think this taillight setup is stock, the lights are actually made from ’41 Chevrolet truck headlight bezels and the lenses of an early ’60s Ford Galaxie! 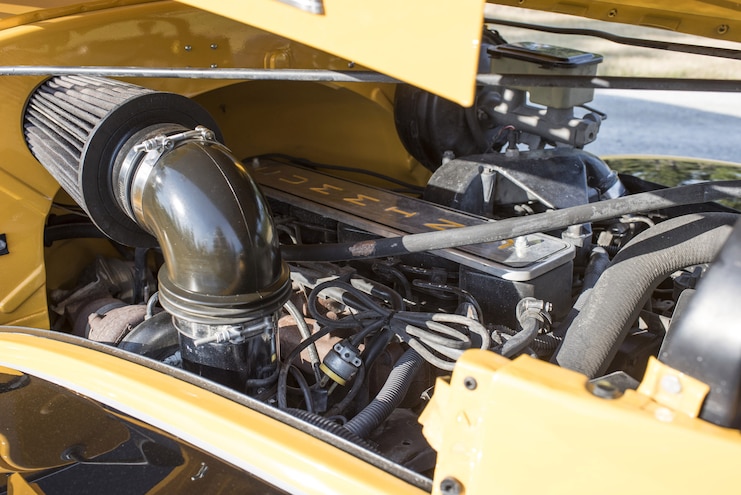 View Photo Gallery | 119 Photos
Photo 7/119   |   In 1941, the engine in this heavy bus would have had the same number of cylinders but a lot less power than the Cummins in it now. Choosing to go for full-on reliability rather than speed, Curtis chose to leave the 5.9L I-6 powerplant nearly 100 percent stock (with the exception of a fuel plate). Fuel mileage is 20-plus mpg on the highway. 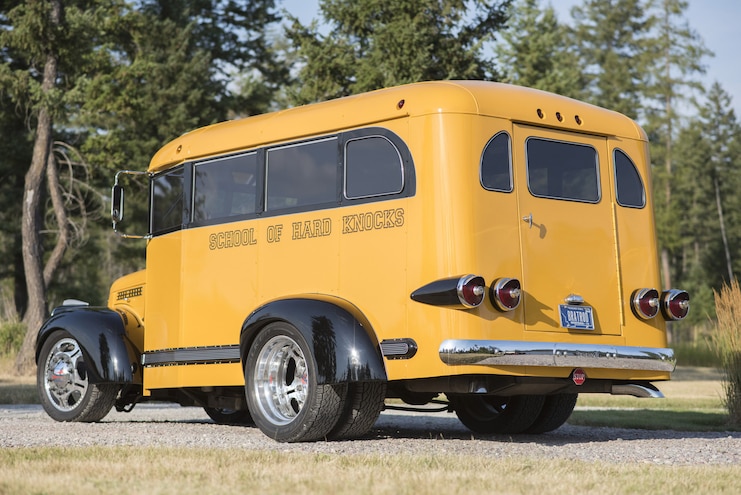 View Photo Gallery | 119 Photos
Photo 8/119   |   There’s not a sharp corner on this thing! One of the major challenges of working on vehicles of this era is repairing, recreating, or, in this case, integrating compound curves to change the body’s appearance but maintain its flow. Curtis’ metalworking skills are on full display here. 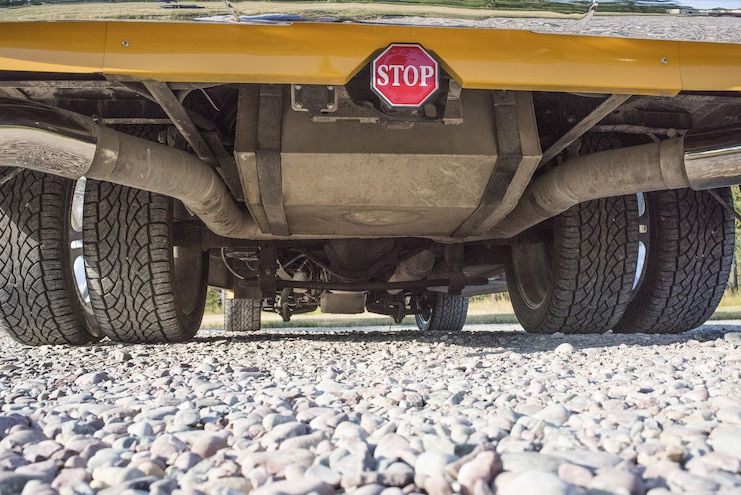 View Photo Gallery | 119 Photos
Photo 9/119   |   Just because the Cummins does not make huge power doesn’t mean Curtis cut corners on the drivetrain. The Dana 80 rear axle is a testament to that. Note the massive sway bar that keeps body lean in check. Also, look at all the tire under there! 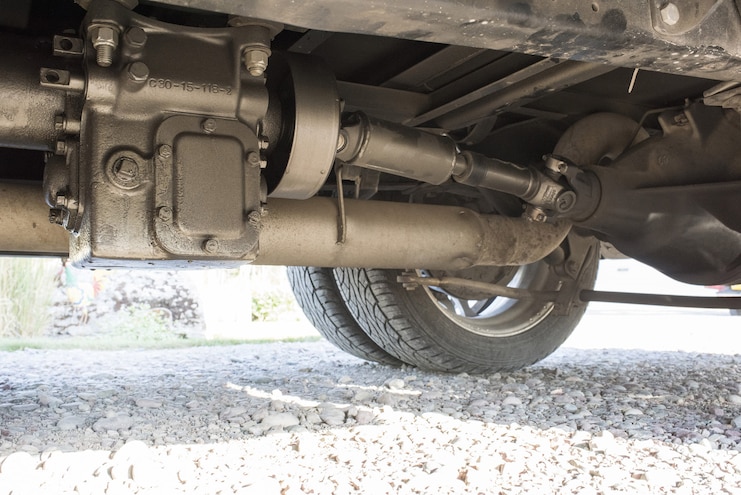 View Photo Gallery | 119 Photos
Photo 10/119   |   The underside is as nice as the top. The Allison transmission is an automatic with a torque converter that has a slower stall speed. This bus weighs way less than the amount the transmission was initially designed to move, and the engine can move the weight easier. Oh, and that gearbox you see is a vintage Brown-Lipe auxiliary transmission. 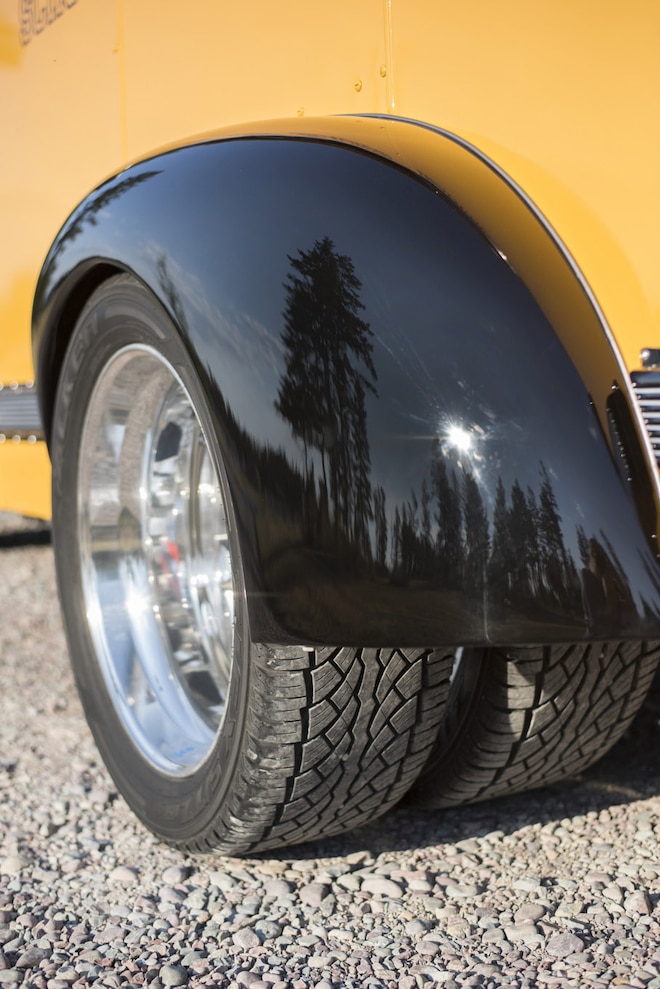 View Photo Gallery | 119 Photos
Photo 11/119   |   While the bright yellow school bus paint is enough to blind the most hardened adults, the details make this ’41 Chevrolet a total all-star. Look at how beautifully these fenders capture the wheels and both 305mm rear tires. 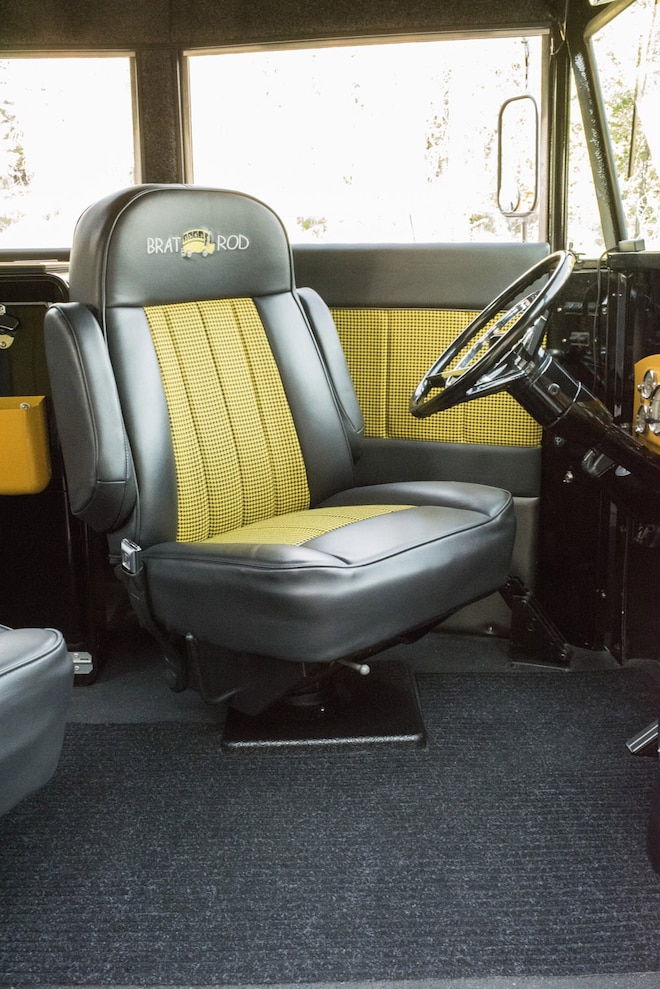 View Photo Gallery | 119 Photos
Photo 12/119   |   Driving the Brat Rod is done in comfort. This swivel captain’s-style seat gives Curtis or Staci the best view in the rig, and it allows for easy entry and exit. The tilt column also suits a driver’s taste in steering angle. Keeping the yellow-and-black theme going inside the bus is a testament to their dedication on this project. 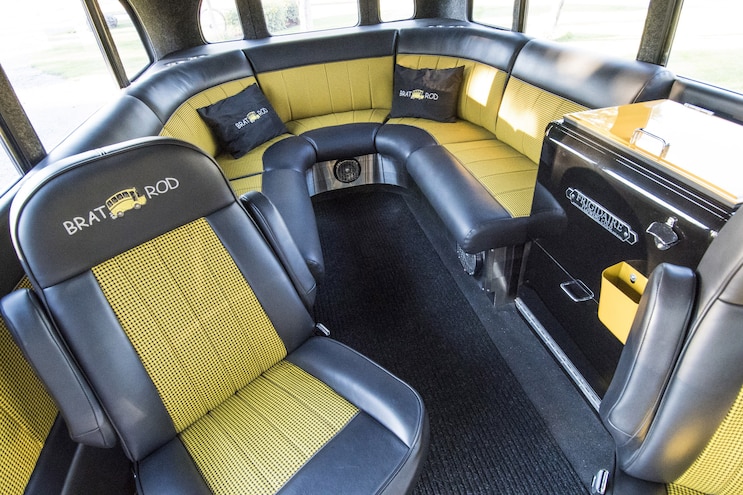 View Photo Gallery | 119 Photos
Photo 13/119   |   The party on wheels! A vintage Frigidaire-look cooler with trick metal-sprung, wraparound seating takes an already interesting rig and vaults it over the top of the coolness scale. Note the custom stereo speakers as well. This is one school bus we’d never want to get off of and would fight to get on!