Can a Chevy & Ford Be Built Together? 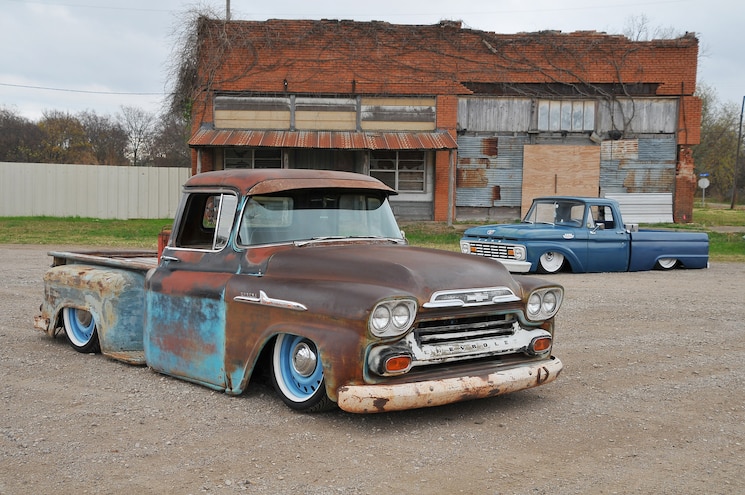 When it comes to trucks, we all know brand loyalty is a key factor when deciding what to buy. It’s not a common thing for a Chevy and Ford to be in the same household, but for the Vowell family, it certainly became a house divided. Although raised in different places, Albert and Ashley Vowell both grew up in the automotive culture. Albert and his father were into drag racing and Ashley grew up with the familiar sounds and smells of loud engines and race fuel. It seemed it was only fate that they would meet and fall in love.
It happened when Ashley moved next door to Albert and the couple began dating almost immediately because of their shared interests. At the time, Albert was driving a ’bagged C10 and Ashley had a mom-style SUV they took to local shows. Albert had his heart set on a ’63 Ford F100 his great grandfather owned, which was passed down to his grandfather and eventually to his mother. 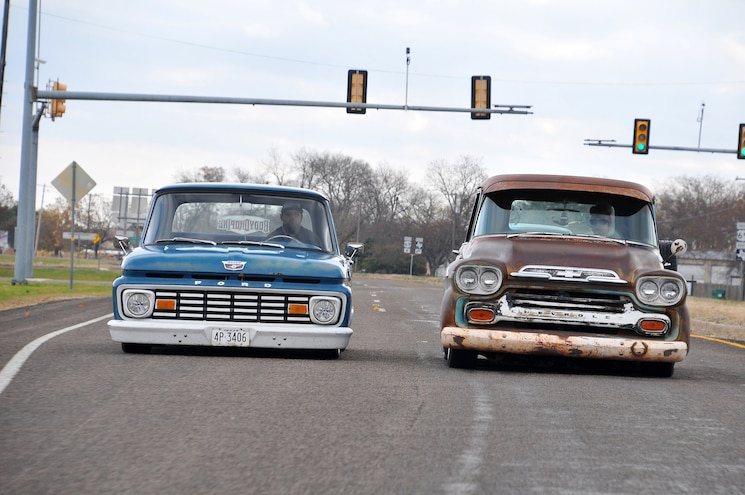 View Photo Gallery | 23 Photos
Photo 2/23   |   A House Divided Front Views
Albert was able to purchase the truck, and although it was stock, it had good bones to it, so it went under the knife. The longbed was removed and replaced with a shortbed. The stock 292 motor was pulled and the small-block 350 was added for speed and durability. The next step was adjusting the suspension by adding a full air-ride kit to the classic Ford.
Two years into the build, Ashley wanted to one-up her husband, but she didn’t want a Ford. Her eyes were set on the Chevy brand—and that passion only grew when she saw an ad for a beat-up ’58 Chevy Apache. Once the truck was brought home, the couple was extremely surprised by how poorly it had been built. That meant the classic Chevy would have to be redone to Ashley’s liking. A stepside was added to replace the stock flatbed. Autofab in Fort Worth, Texas, was enlisted to handle all the metal work. In order to maintain her flare for creativity, Ashley found a vintage wooden swing and had it installed, replacing the stock seats. Albert added a full air-ride system to match the body drop on his Ford. With the help of her father, Ashley swapped in the ’04 Chevy Tahoe LS motor for reliability. 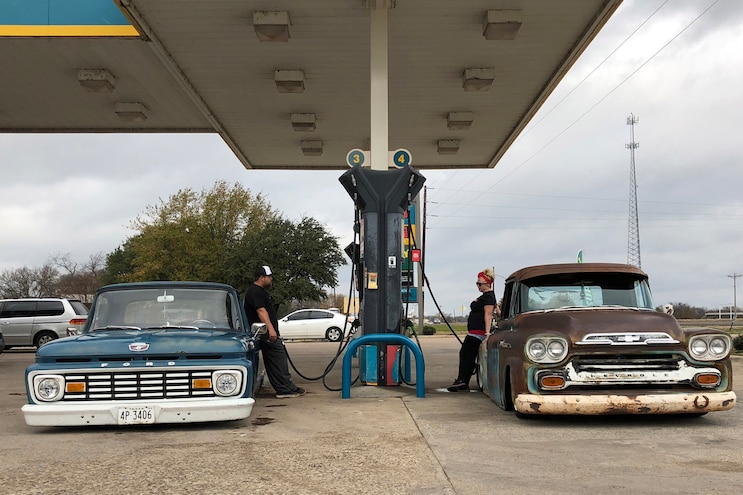 View Photo Gallery | 23 Photos
Photo 3/23   |   A House Divided
Although they own competing brands, Albert and Ashley travel to shows together side by side as a demonstration of solidarity. A house divided by Chevys and Fords has actually brought them closer together. They both wish to thank all the helping hands that assisted in their unique builds. Albert named his Ford F100 Big Boy because that was his grandfather’s nickname, and Ashley named her Apache Rustina, which goes well with her truck club logo that was etched in rust on the back window. 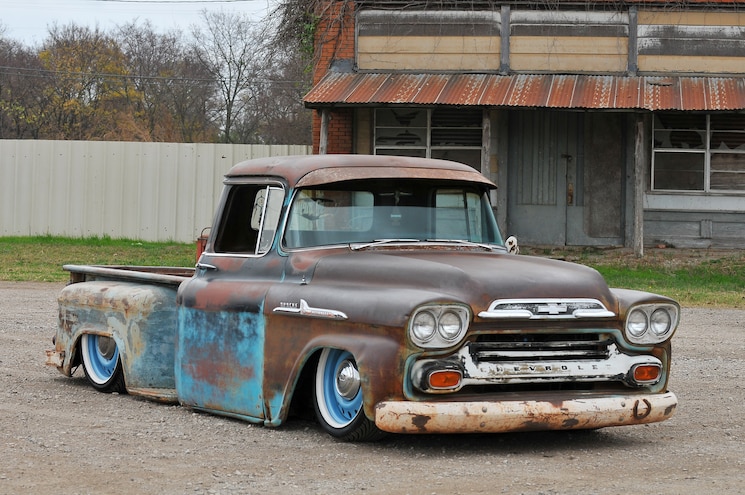 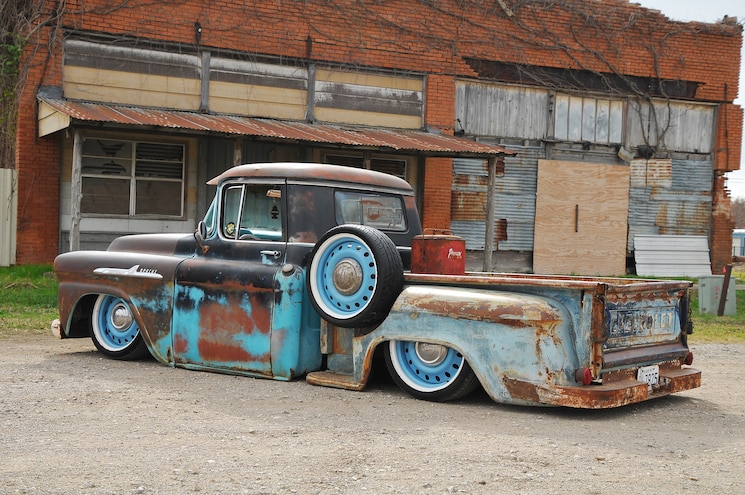 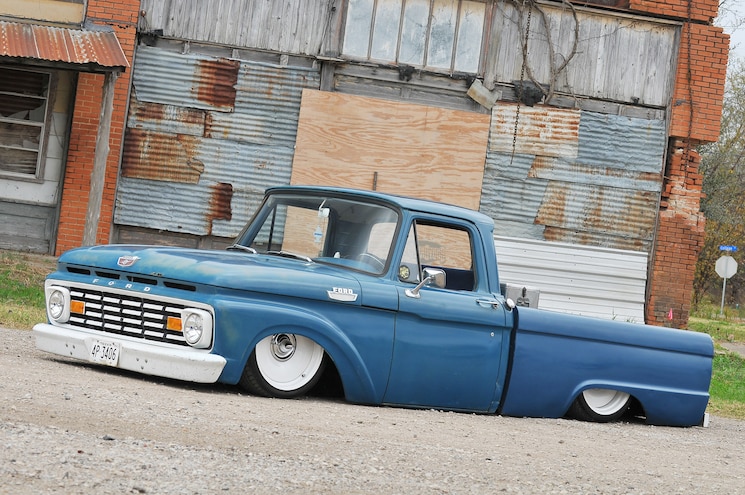 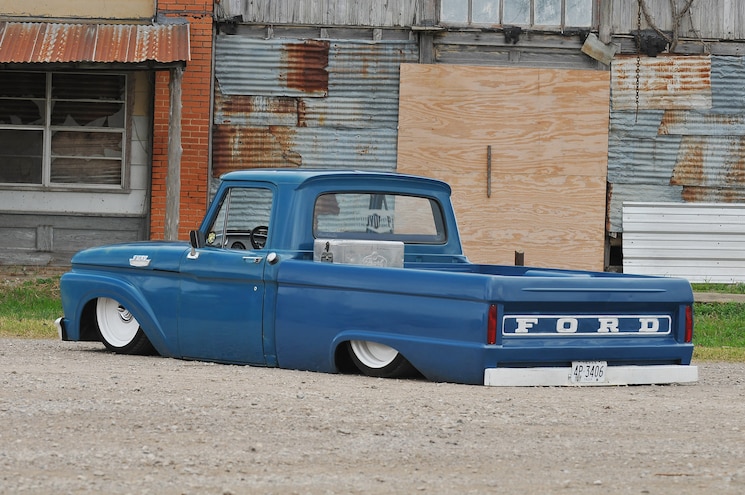