The Big Kahuna: Large on Personality, Small in Stature 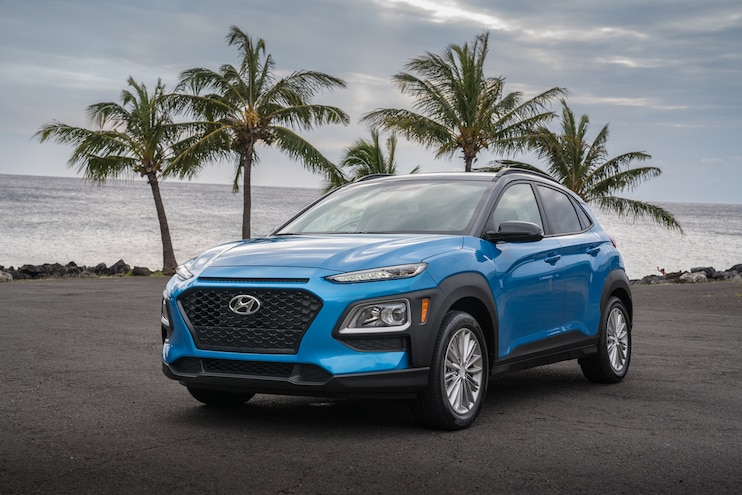 To say it has personality would be an understatement. We’re talking, of course, about Hyundai’s latest addition to its SUV lineup, the ’18 Kona. While it may appear late to the game, as Americans’ desire for cars dries up and the small and compact SUV classes explode, Hyundai was strategic in when and how it went about releasing Kona into the wild. Taking the more conservative approach ensured that Kona wouldn’t just be another among the crowded field, but rather be the best. 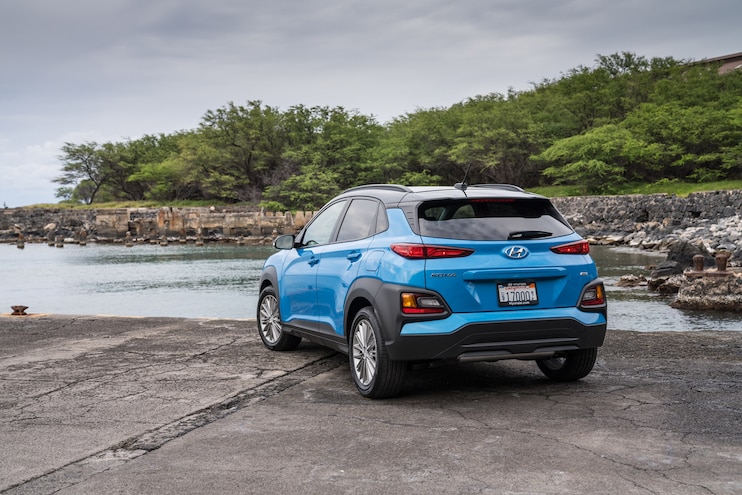 View Photo Gallery | 40 Photos
Photo 2/40   |   2018 Hyundai Kona Rear
Loosely following the naming convention of its brethren, the Tucson and Santa Fe, the Kona is also named after a locale, this time from the Big Island of Hawaii. Taking inspiration for its design from the beauty of flowing lava and targeting those who enjoy a more athletic, outdoor lifestyle, the Kona name embodies all that this vehicle is. Its short front and rear overhangs give it a sporty vibe, and its stance brings visions of a linebacker crouching in position ready to attack. It’s meant to be fun and exciting instead of simple and utilitarian like many of its competitors. Typically not huge fans of small SUV styling, we adore the Kona and believe Hyundai nailed what it was going for design-wise. We also believe there’s no better color for the Kona than the available Surf Blue or Lime Twist, as these really bring out the spunk. If there has to be a negative for us, it lies in the headlights. Much akin to the ’14 Jeep Cherokee, the Kona has a beautiful LED accent strip atop a ho-hum projector headlight. Jeep fixed this for ’19, ditching the projector light entirely, and we hope Hyundai does the same at some point in Kona’s life. View Photo Gallery | 40 Photos
Photo 3/40   |   2018 Hyundai Kona Engine
Our time with the Kona was spent, fittingly, on the Big Island of Hawaii, and we grabbed a Surf Blue model because the color is awesome. Kona is available in four trims, from SE to Ultimate. The SE and SEL models come equipped with a 2.0L Atkinson-cycle four-cylinder engine—which produces 147 hp and 132 lb-ft of torque—and a six-speed automatic transmission. Limited and Ultimate are fitted with a smaller 1.6L turbocharged and direct-injected engine, which is mated to the company’s seven-speed EcoShift dual-clutch automatic. Our tester was a fully loaded Ultimate with all-wheel drive.
Upon setting off on our adventure, the first thing we noticed was just how quiet the Kona was cruising down the highway. This particular class of vehicle is typically awash in road noise that only escalates as speed increases. However, the Kona showed no sign of this and Hyundai’s engineering team was very proud of that fact. 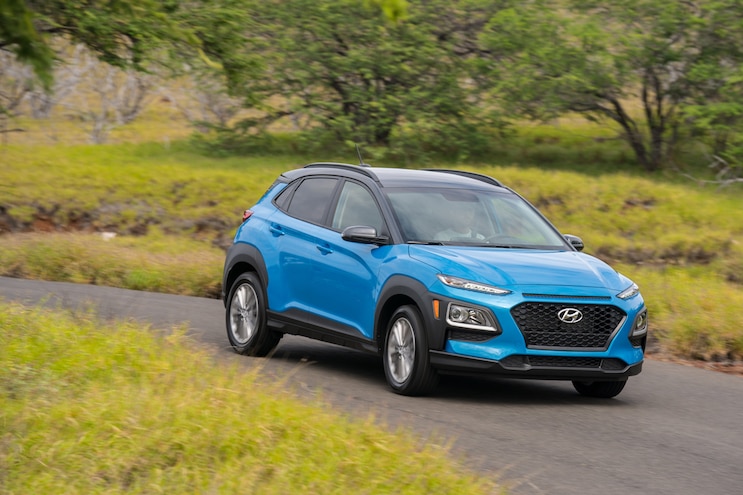 View Photo Gallery | 40 Photos
Photo 4/40   |   2018 Hyundai Kona
The 1.6L turbocharged I-4 engine in the Limited and Ultimate models produces a modest 175 hp and 195 lb-ft of torque. That torque, however, is available in full from 1,500 rpm all the way up to 4,500. What this means is the Kona feels quite peppy. It gets off the line in a hurry and has no trouble at all climbing grades. We quickly rose from sea level to more than 6,000 feet in elevation, and Kona barely had to downshift. We also felt no drop in power or response at altitude. The dual-clutch transmission functions as intended, but it feels jittery at slow speeds, such as when entering a driveway or reversing out of a parking spot. That’s just the nature of the dual-clutch beast and not a knock against Hyundai. Others on the drive didn’t notice this at all, so your perception may vary.
The Kona is right at home zipping down the highway, and it provides a confident and compliant ride. Suspension damping is a bit on the heavy side, but we prefer it that way instead of too soft. Steering is electrically assisted, as you’d expect, and aside from providing little feedback, it did the job just fine. Opting for all-wheel drive swaps the rear suspension from a torsion beam to a multi-link setup. Add in the standard torque vectoring by braking, and the all-wheel-drive Kona becomes a fun canyon carver. 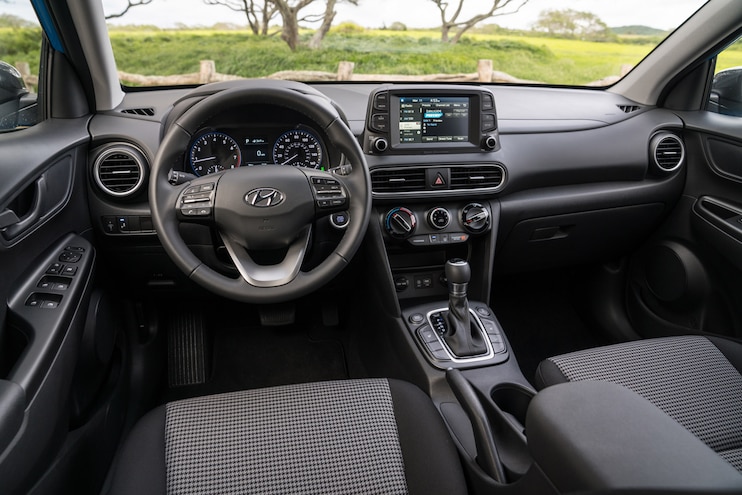 View Photo Gallery | 40 Photos
Photo 5/40   |   2018 Hyundai Kona Interior
We felt right at home inside the Kona. The cabin is comfortable and quiet, and the standard technology package blows the competition out of the water. Blind-spot collision warning, rear cross-traffic warning, forward collision avoidance, pedestrian detection, lane-departure warning, lane-keep assist, driver-attention warning, and high-beam assist are all available on Kona and standard on Ultimate. Standard across the line is a 7-inch infotainment display with Apple CarPlay and Android Auto. Niceties such as wireless inductive charging, a head-up display unit, rain-sensing wipers, and LED lighting are available. If we were forced to name one negative about the interior, it’s that the passenger seat, even on the top-trim Ultimate, is manually adjusted with fairly limited range compared to the driver seat. But that would be really grasping for straws.
Hyundai has hit a home run with Kona. As a clean-sheet design, engineers were able to focus on the areas that matter most—structural rigidity, cabin quietness, handling, and performance—without making sacrifices. The interior and exterior design match well with the theme of sporty and fun, and for a vehicle that when fully optioned is still less than 30 grand, the Kona is loaded with a ton of tech. We walked away from our short time with the Kona impressed and are certain anyone cross-shopping this class will as well. 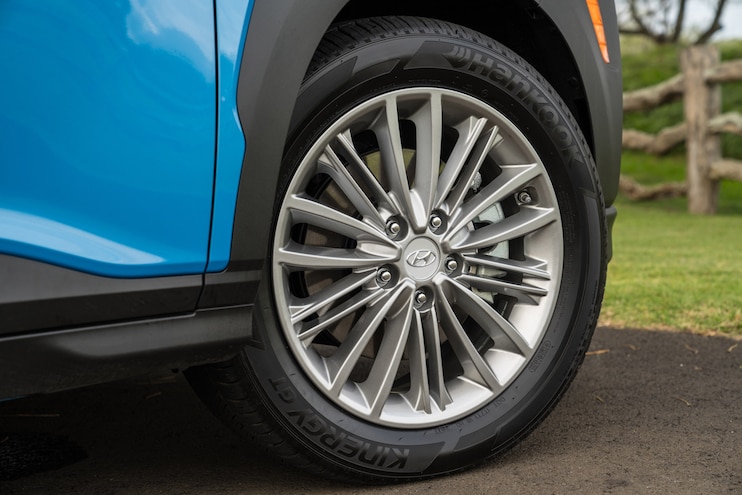