What to look for when shopping for a used Escalade. 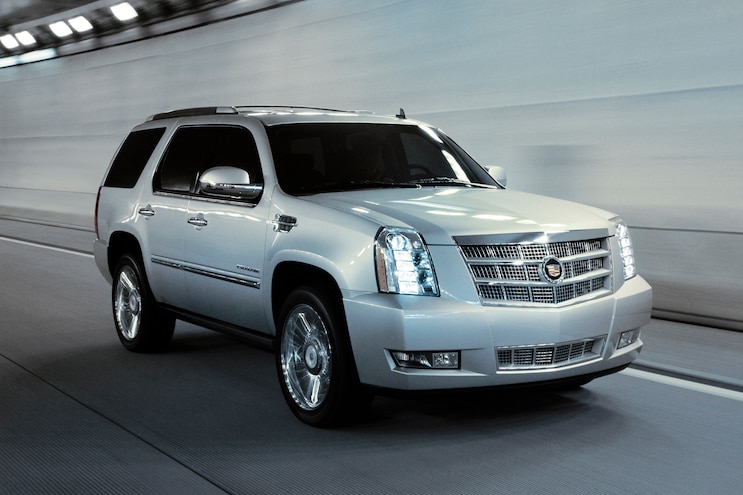 We live in a different world than the one that spawned the Escalade. A less shiny one, even. Matte paintwork finishes are trending, as is black powdercoating for alloy wheels. The Escalade may well have been an icon of a gaudier era, but there’s still a lot to like about this third generation of Cadillac’s fullsize SUV. It’s roomier than its predecessor, with nicer-quality cabin materials, a more powerful engine, less sloppy steering, and a better build.
Starting from square one, this generation is based on what was a new General Motors truck platform that had more torsional rigidity compared with the previous version. A stiffer foundation allows for more precision when tuning the suspension. And even if the third-generation Escalade is not the last word in body control, it still rides with more composure and greater comfort than generation two. A rack-and-pinion steering system took over from the vague recirculating-ball setup, giving the Escalade a decently tight turning circle of 39 feet.
The sole engine is an all-aluminum 6.2L V-8 making 403 hp and 416 lb-ft of torque. This is linked to a six-speed automatic transmission with rear-wheel drive as the base arrangement, or all-wheel drive as an option. Where all four wheels are driven, the torque split is 40/60 front to rear.
Cadillac decided not to follow the formula of the Lexus LX or Range Rover by endowing the Escalade with much off-roading capability, because no one pilots a luxury SUV away from the tarmac unless some terrible event has taken place. So there’s no dual-range transfer case. But the fully boxed body-on-frame construction at least gives the Escalade a maximum towing capacity of 8,300 pounds (regular-length, rear-drive model). 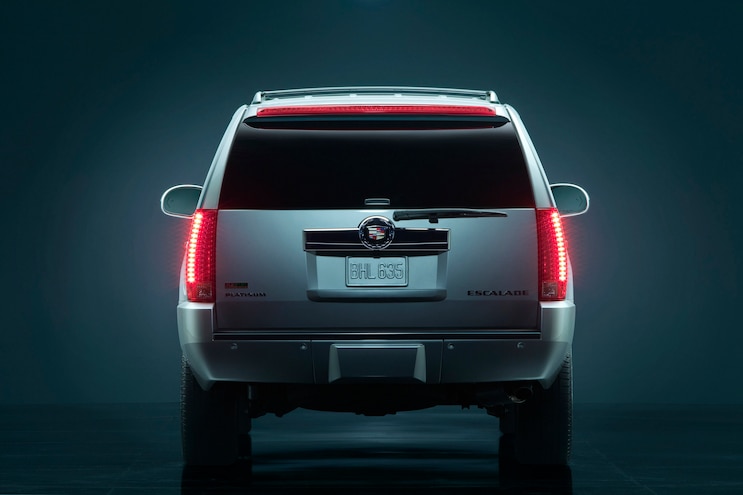 View Photo Gallery | 6 Photos
Photo 2/6   |   Pre Owned Escalade Rear
This Escalade comes in a few flavors. There’s the regular version, the stretched-wheelbase ESV (21 inches longer than the standard model), the Hybrid (from ’09 to ’13) and the half-pickup EXT. For expediency, we’ll concentrate on the regular model, which can still accommodate up to eight occupants (from ’08 onward).
Cargo space is voluminous. Behind the third row, there’s 16.9 cubic feet. Take that row out (yes, it’s inconvenient) and there’s 60.3 cubic feet. With the second row folded down (power folding is optional), maximum cargo area is 108.9 cubic feet. The ESV expands on the regular Escalade with cargo space ranging between 45.8 to 137.4 cubes.
The Escalade launched in ’07 with one comprehensively equipped trim level that included 18-inch alloy wheels, leather upholstery, powered tailgate, parking sensors, heated windshield washers, remote start, three-zone automatic climate control, 10-speaker Bose surround-sound system with satellite radio, heated seats in the first two rows, 14-way power-adjustable from seats with memory settings, and power-adjustable pedals. Among the options were a sunroof, ventilated front seats, heated steering wheel, navigation, rearview camera, power-retractable running boards, and a rear-seat DVD system.
Huge and luxurious, this Escalade was one of the best in its class. It was also the first SUV from GM to offer the company’s Magnetic Ride Control adaptive suspension. The Escalade became so popular that it was once named the most stolen SUV, as reported by the Insurance Institute for Highway Safety (IIHS). Not even average fuel consumption in the mid-teens could dampen enthusiasm.
In ’08 came a high-end Platinum trim with most of the optional bells and whistles as standard, plus 22-inch chrome-finished alloy wheels (remember, it was a shinier time) and heated/cooled cupholders. Bluetooth became standard in ’09, along with a power-adjustable steering column. Blind-spot monitoring, LED headlights, and real-time traffic updates for the navigation system joined the options list.
The following year saw some upgrades in the safety department, cylinder deactivation in the engine bay, and a USB in the center console. But the Escalade lost rain-sensing wipers. This was also the year when two more trims slotted between the entry level and the Platinum: Luxury and Premium.
The ’11 version lost the six-CD changer, replaced by a single-disc unit, while gaining laminated glass for the windshield and front windows and a few other noise-reduction measures. The navigation system was upgraded in ’12; the final production years had no real changes.
The book price for a ’11 version in good condition with all-wheel drive, blind-spot monitoring and 90,000 miles on the odometer, bought from a private party, is $22,278. A comparable Infiniti QX56 is valued at $20,629, while a Mercedes-Benz GL 550 comes in at $19,796. Bear in mind these rivals will have more off-road ability, if that’s important.