A Bullnose Built With Cop Parts 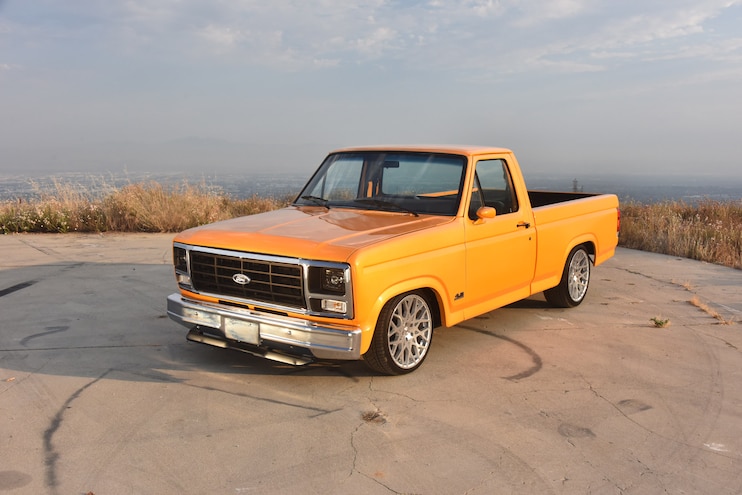 If any truck enthusiast were asked which Ford truck he or she would like to customize, more than likely the answer would not include a seventh-generation F-series. In 1980, Ford introduced its newest-generation F-series lineup, which ran until 1986. Although sales were favorable at the time, this specific generation of the F-series is not so popular today.
Sometimes—perhaps more often than not—truck builds are challenging, even when the foundation is already a popular and cool truck. TMI Products chose a distinct route and opted for a truck that is not celebrated in the truck-customizing world. Larry Ashley, the marketing director at TMI, says, “We knew we could take the ultimate stepchild of trucks and turn it into a show machine, but it would take something really special.” 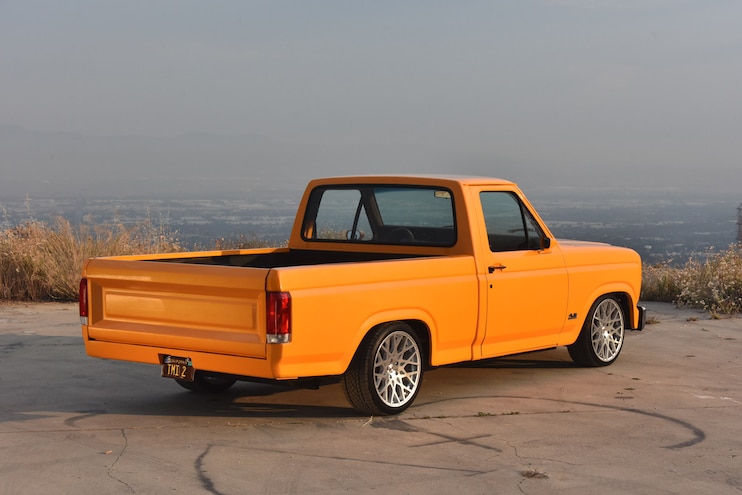 View Photo Gallery | 12 Photos
Photo 2/12   |   TMI 1985 Ford F150 Rear
The ’85 Ford F-150, aka Bullnose, was purchased for a mere $500. The plan to convert this truck into something out of the ordinary was fierce, and the clever individuals at TMI approached it with confidence. To make this build unique, TMI Products bought a retired black and white Ford Interceptor. The ’08 Interceptor cost a well-spent $2,800. To begin the build, the TMI crew took off the body of the ex-cruiser and scrapped it. Larry says, “using an interceptor front clip is not anything new, but using the whole car except for the body…well I think that is something rare.” The F-150 body was removed from its chassis and everything else belonging to Bullnose was discarded. The first goal here was to set the F-150 body on the Interceptor chassis. Mounting the body on the Interceptor’s underpinnings was not a simple task. This is when Larry searched for help from the team over at RnG. Initially, their response to this request was “too big, can’t be done.” Larry didn’t give up and quickly pulled out measuring tape and discovered it would fit “like a glove.” 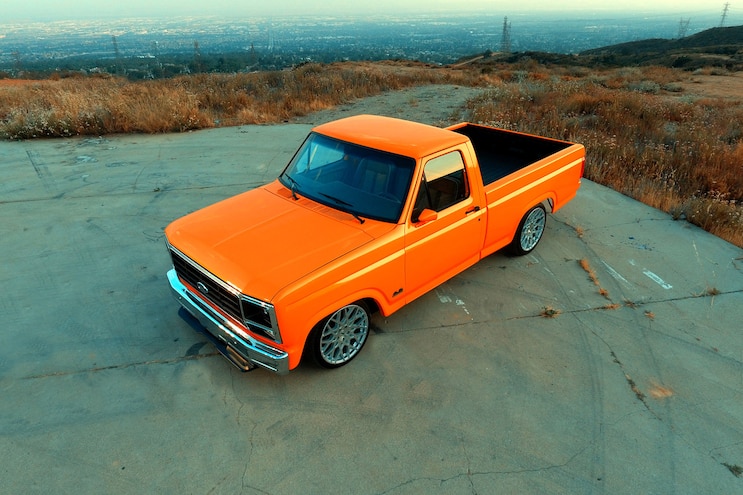 View Photo Gallery | 12 Photos
Photo 3/12   |   TMI 1985 Ford F150
It would’ve been great if setting the Bullnose body on the chassis was simple, but some alterations had to be completed by RnG. The front and rear framehorns had to be shortened, and the bed floor was raised 6 inches to make room for the coiled suspension and upright gas tank. Finally, after three weekends of fab work, the body fit. For the most part, the undercarriage is stock Ford Interceptor. Eaton lowering coil springs were incorporated for better stance and ride.
This truck might as well be an undercover cop car, because aside from the body, this is practically a police cruiser. The powertrain is mostly factory Interceptor. The 4.6L V-8 was rebuilt at RnG. The boring stock exhaust was replaced by a Flowmaster exhaust system. TMI retained the four-speed automatic transmission and the stock 3.27:1 open differential. The Interceptor’s brakes were also kept on the build. Connecting to the road are 19- and 22-inch TSW Vale wheels with a silver machine and mirror finish. To complete the package, ExtremeContact Continental tires wrap the stylish wheels. 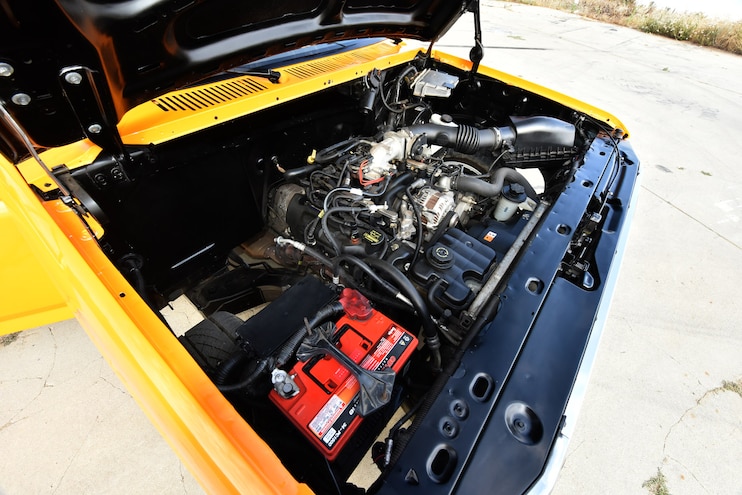 View Photo Gallery | 12 Photos
Photo 4/12   |   TMI 1985 Ford F150 Engine
On the exterior, subtle modifications were made. The trim, badging, marker lights, and tailgate were shaved. To improve the looks, a TMI front air dam was installed, and the rear bumper was dropped in favor of a roll pan. Dapper HID lights were added and a Bullet bedliner covers the bed. To complete the exterior, TMI entrusted Johnny’s Auto Color out of Riverside, California, with the ultimate paintjob. The crew covered Bullnose in a gold pearl tangerine color scheme that makes this rig stand out. Interceptor 4.6 badges were placed on the quarter panels, suggesting there’s more to this truck than meets the eye. 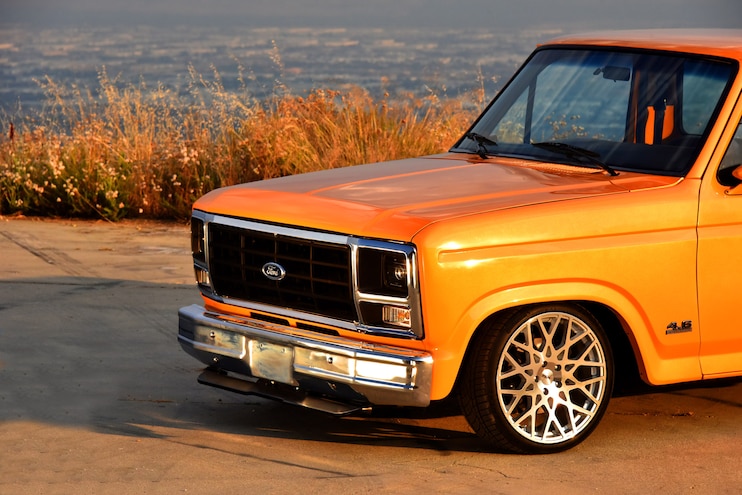 View Photo Gallery | 12 Photos
Photo 5/12   |   TMI 1985 Ford F150 Front
TMI Products specializes in custom interiors, so this project’s innards were given the utmost attention. First, the bench seat was replaced with TMI Classic Pro Series buckets with a custom combination of brown vinyl and stone-colored suede inserts. In addition, a TMI Products Sport dash pad and TMI Sport R steering wheel were added, the factory Ford Crown Vic cluster was held over, and the carpet received a custom treatment when TMI installed a German weave carpet. A JVC sound system delivers all the harmony in the cabin. 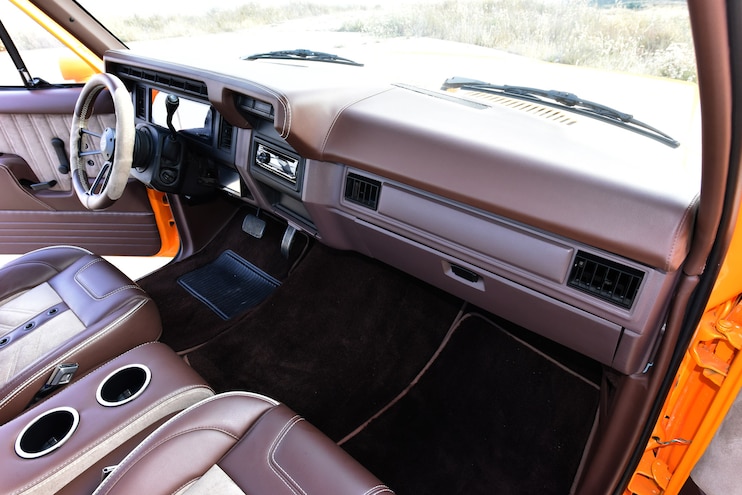 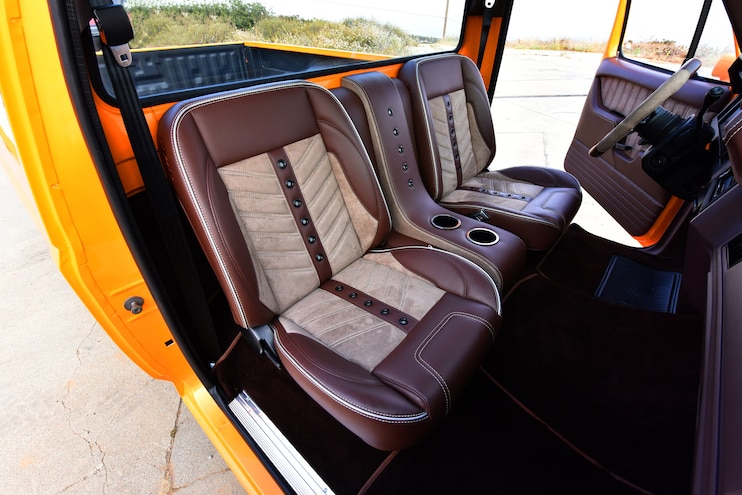 View Photo Gallery | 12 Photos
Photo 7/12   |   TMI 1985 Ford F150 Seats
This F-150 was meticulously built to prove to any doubters that even an unpopular truck can be attractive. Larry says he “hopes this build shows other Bullnose owners this model is not the stepchild of the custom truck world and can hold its own at any show.” Since its completion, the truck has been proudly displayed at SEMA and other local shows. Larry and the TMI crew build a lot of trucks, so hopefully their trend of looking beyond the beaten path becomes a trend for them. 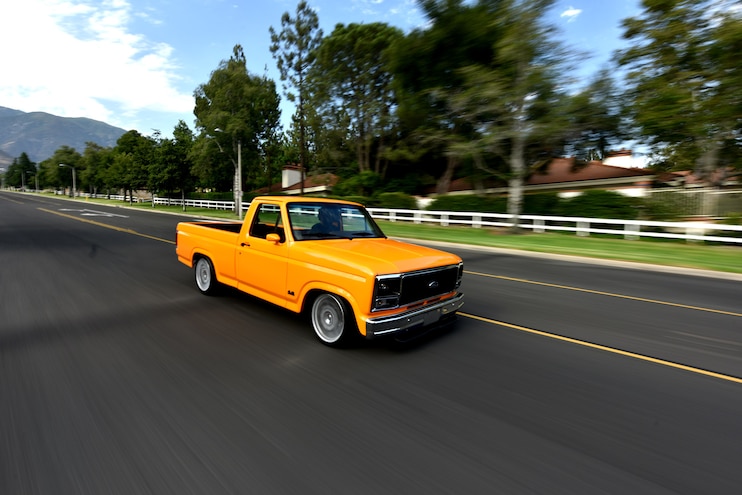