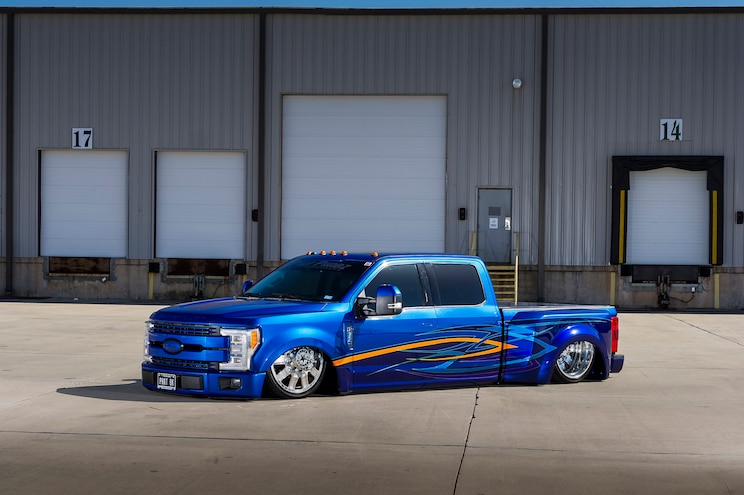 At this point in time, Phat Phabz OKC may be one of the most recognized and respected truck and frame building shops in the game. If you haven’t heard of it, we are glad you are reading our magazine to catch up on current times. From show-winners to road-trippers to SEMA builds, Phat Phabz can pretty much build anything you want. All you need is an idea and a checkbook. Honestly, the crew can give you the ideas—just bring the checkbook. Friend of the shop Matt Holden seems to be building a new truck every time we turn around with help from Jake McKiddie and the Phat Phabz team. The idea for his latest project came during a visit to a place all grown men create great plans: road trip stops at Cracker Barrel. The plan? To have the first bagged new-body F-350 dualie at SEMA 2017.
The first step was contacting Derek Zacha from Truck Hero/UnderCover to see if he had an available spot at SEMA waiting to be filled by a neck breaker—and the answer was yes. With that confirmation, Matt immediately ordered the truck, and the plans and sponsor arrangements for the all-too-familiar SEMA crunch started coming together. 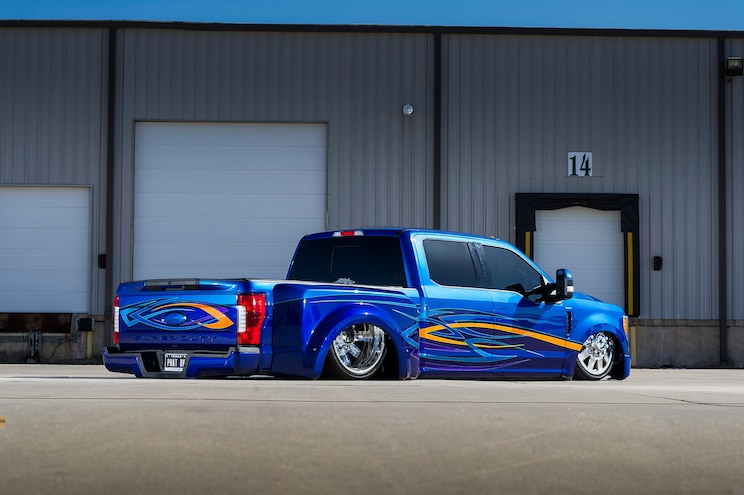 View Photo Gallery | 13 Photos
Photo 2/13   |   2017 Ford F350 The Immortal Phat 350 Rear
When it came time for the Phat Phabz crew to knock out another build for their good friend, the sky was the limit. Matt basically said as long as it was functional, on time for the debut, and the first of its kind, they should go for it. As soon as the truck pulled into Jake McKiddie’s shop, the body and stock frame were separated. After a few hours of counting on fingers and toes, Jake and the crew decided that was enough math to get started and began laying out the F-350’s new one-off platform. The chassis would be built with 2x4-foot/.188-inch-wall tubing as well as having double rails run under the cab. Basically, it is really strong and built to take a beating and extreme weight if need be from towing. After Phat Phabz built a full set of custom upper and lower control arms and about a thousand other parts to go along with it all, the 3,800-pound bags were installed and the Phat 350 began to take shape in its new home on the ground. As the bags were inflated on the truck’s new frame setup, the new-to-market Accuair Endo VT and E-level management system ensured no issues would arise from valve or air pressure errors. 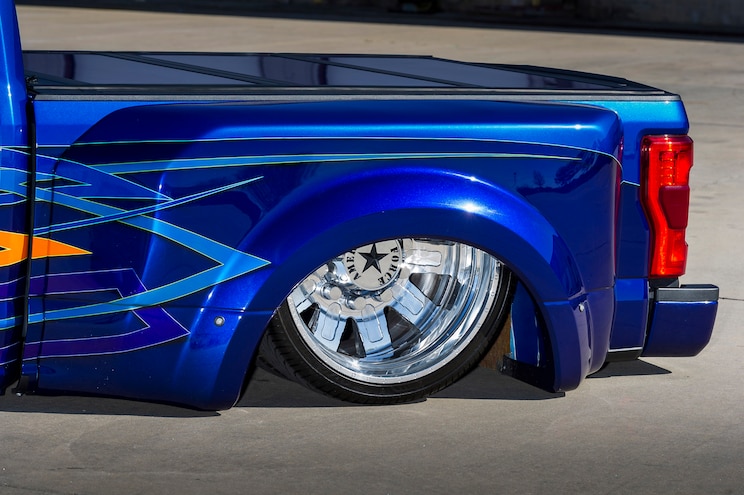 View Photo Gallery | 13 Photos
Photo 3/13   |   2017 Ford F350 The Immortal Phat 350 Rear Wheel
Once the custom raised bed floor was complete, the Bullet bedliner was installed, along with an access panel behind tailgate. As other details were wrapped, up the decision was made by Matt and Jake to stretch and raise the rear fenders. The extra clearance to lay out as well as drive low with no possible issues is a must when building trucks of this caliber. A full color change for the F-350 and custom graphics were laid out by CD Designs. The combination of contrasting colors really set this truck off in a sea of stock painted trucks. Finishing up the quest for SEMA, Matt had a full set of Roadwire seat covers installed in the newborn truck’s cab as well as an upgraded stereo setup from Kicker. The term “If it ain’t broke, don't fix it” does not apply to these guys; it’s more like, “If it is stock, or someone else has it...replace it.” 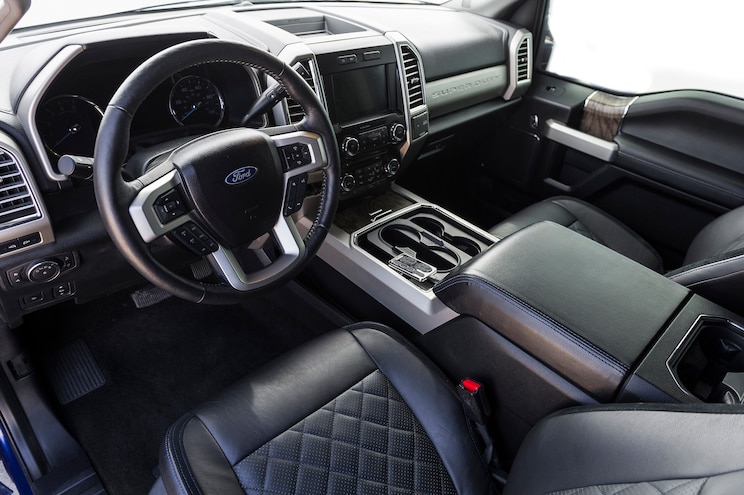 View Photo Gallery | 13 Photos
Photo 4/13   |   2017 Ford F350 The Immortal Phat 350 Interior
With the chassis details wrapped up, American Force came through with an immaculate set of brand-new 26-inch Code wheels to tuck into the fenders of the Ford masterpiece. No heavy hauler is worth the effort if it cannot stop the load it’s pulling, so a set of Wilwood six-piston calipers with 16-inch rotors was installed behind those American Force wheels to provide some serious stopping power. Already having an abundance of reliable power from the 6.7L Ford Power Stroke V-8, the crew added a few dress-up mods, such as polished pipes, headers, and intake covers so no area on the truck would be left untouched. 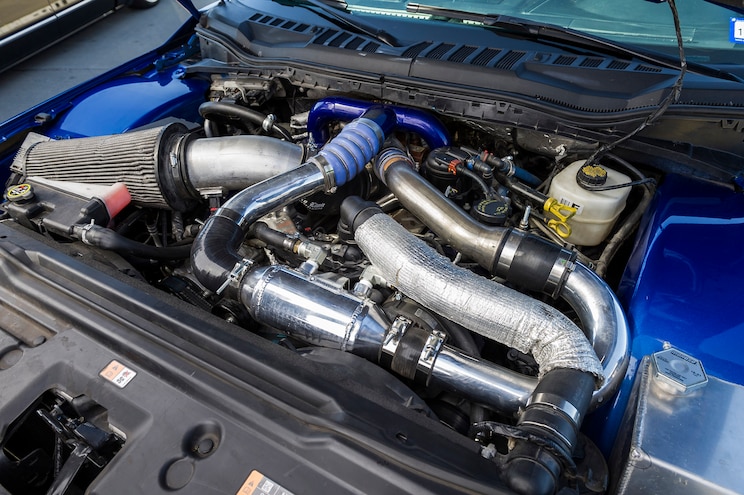 View Photo Gallery | 13 Photos
Photo 5/13   |   2017 Ford F350 The Immortal Phat 350 Engine
As always, Matt and Phat Phabz completed their truck on time for SEMA, and it was everything they hoped it to be and more. Be on the lookout for it at shows all across the United States this year, and keep an eye on this group of guys for all the new builds they continually push boundaries with month after month. Matt wants to say his biggest thank you to his daughter, Kelsie, for always understanding the crazy life he lives and giving him a great reason to wake up each morning. A thank you also goes to all his amazing sponsors, friends, and family for the endless support. A special thanks goes to Jake and the entire Phat Phabz crew...and also every one of their moms, aunts, and grandmothers who show Matt love each and every day. Finally, if anyone from Cracker Barrel reads this, he would love your sponsorship for his upcoming builds via free food for his many trips across the continental United States, so please to contact him immediately if interested.