Sometimes It Takes a While To Get It Right 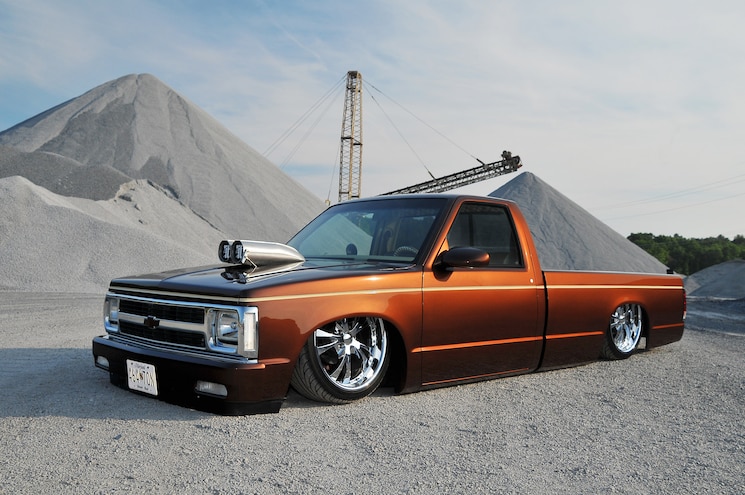 It’s hard to believe being part of three different families before the age of 10 could have a positive influence on your life. Austin Landon found out early that three times can be a charm. At 10, he was placed in his final foster home. One of his new brothers in the house was seven years older than Austin, and they took to being good friends. His brother had a custom Chevy S-10 mini-truck, and Austin spent a lot of time learning about it.
The day Austin turned the legal driving age, his foster father had a surprise waiting for him: When Austin arrived home with his new license and a smile, in the garage sat a two-door Chevy Blazer. His older brother had lowered it for him to make it custom. Austin purchased a set of Boss 304 wheels for the Blazer and enjoyed it until it eventually became too much work to fix. That’s when Austin removed the wheels and scrapped the Blazer. 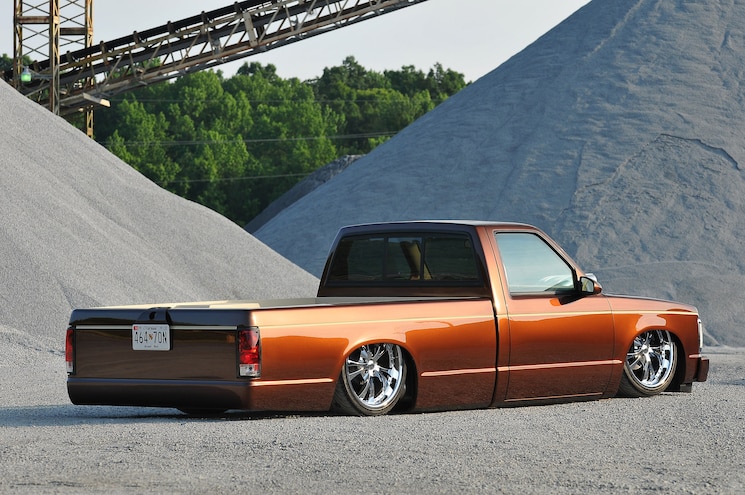 View Photo Gallery | 15 Photos
Photo 2/15   |   1987 Chevy S10 Three Times A Charm Rear 3 4 View
During his search for a new truck, Austin located an ’87 Chevy S-10 online, owned by an elderly man. “The Chevy was an old-man blue,” Austin tells Truckin, “but the frame was perfect, and the pickup was more my style.” The very first thing Austin did was put his Blazer wheels on it for a bit of nostalgia. Then he began the motor work. The 2.8L V-6 was fine, but Austin wasn’t going for “fine.” He purchased a crate 350 V-8 from Jegs and, through trial and error, installed it himself. 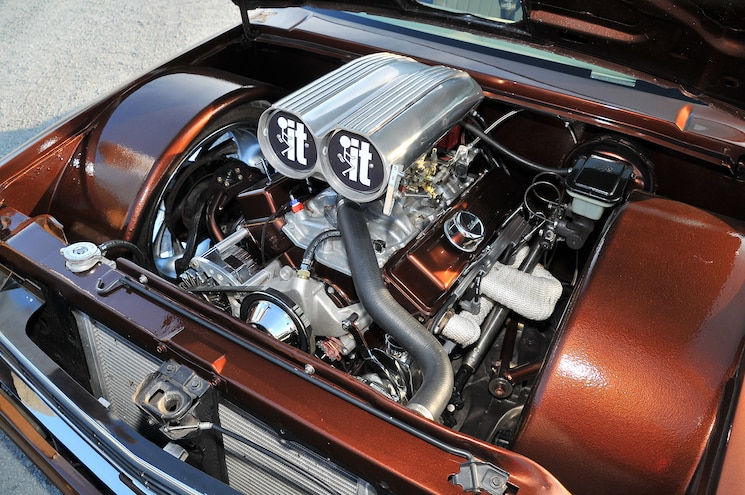 View Photo Gallery | 15 Photos
Photo 3/15   |   1987 Chevy S10 Three Times A Charm Engine
His next step was bringing the Chevy to the ground by way of air-ride suspension. It took Austin three different suspensions before he was finally satisfied with the job. He added a traditional body drop so the classic wheels would tuck and the body would lay. When Hurricane Sandy rolled through Maryland, Austin asked his good friend Joe Cane if the S-10 could be stored in his shop to protect it. Once the hurricane passed, the truck remained there for the remainder of the build. Joe took an interest in the build and began the bodywork. Together, they worked on the bed, all the metalwork, and shaving. 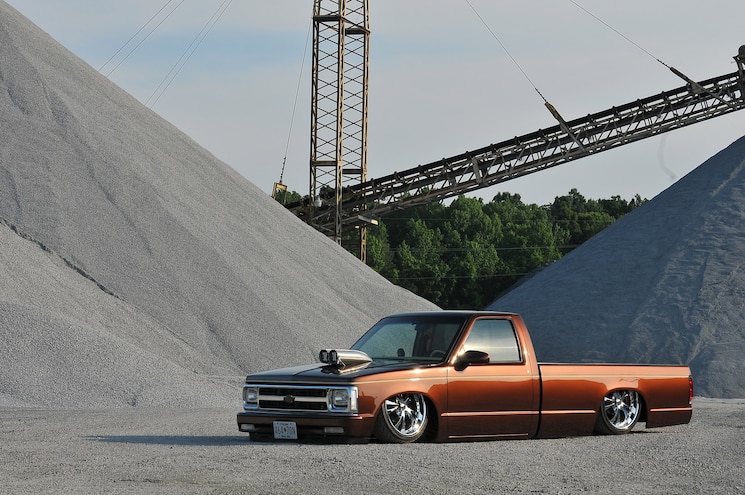 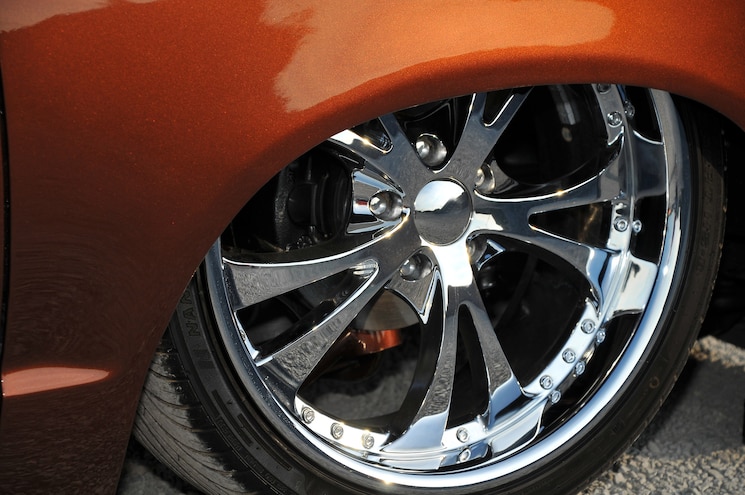 View Photo Gallery | 15 Photos
Photo 5/15   |   1987 Chevy S10 Three Times A Charm Wheel
The next step was adding a solid updated interior. The bench seat was brought to Lucky’s Garage in Delmar, Delaware, where John wrapped it in vinyl. Joe and Austin customized the rest of the interior using one-off pieces. Joe turned his attention to the exterior and used his painting expertise to coat the Chevy with a unique blend of DuPont Chocolate Brown Pearl and Desert Tan. 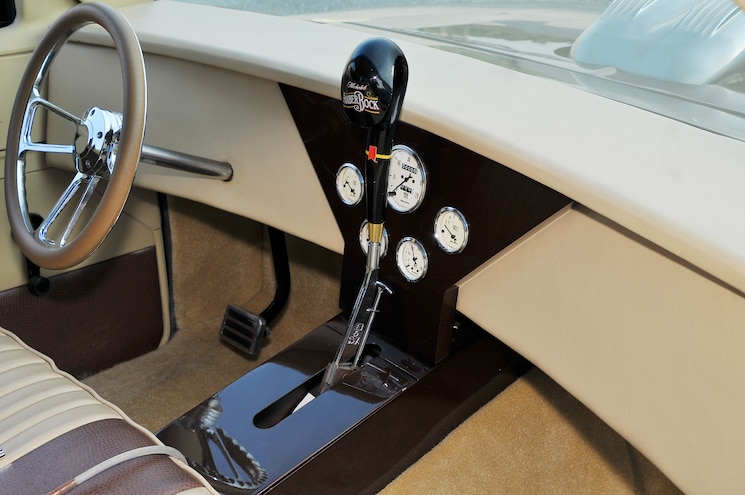 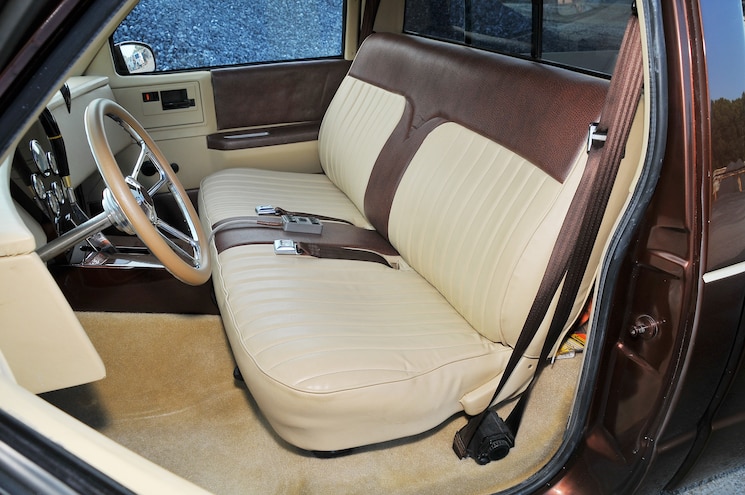 View Photo Gallery | 15 Photos
Photo 7/15   |   1987 Chevy S10 Three Times A Charm Interior Seat
It may have taken three different homes before Austin found the right one, but the connection he made and the love he has for the people who raised him show in every detail of his custom truck. He wishes to thank his foster family for guiding him in the right direction. And a special thank you goes to his beautiful wife, Kaycee, and their two children Ayden and Layla. Austin also wants to extend a thank you to his good friends Joe Cane, Buddy Smith, John Hill, and Dillon Layfield for everything they helped with on the truck.