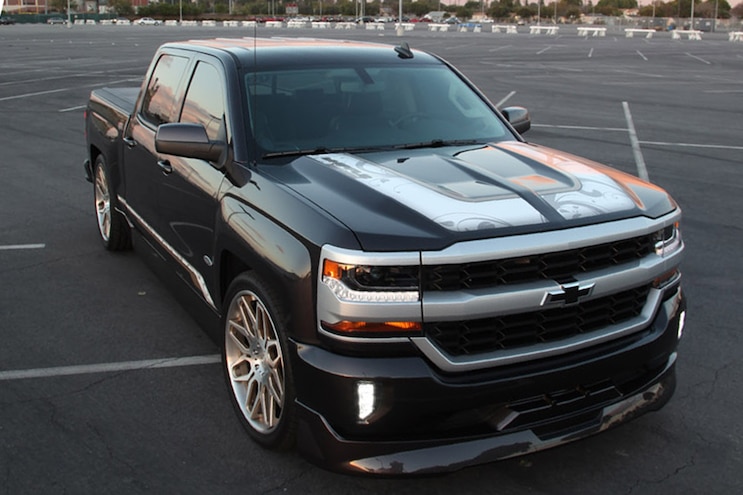 Sometimes, car builders need an extra push to begin reconstructing their project vehicles. For Kris Horton, owner of Cars by Kris, the motivation to modify a ’16 Chevrolet Silverado 1500 was nothing more than supplementary. He initially purchased the truck for his wife to use as a daily driver, with a future build in mind. The additional push to customize the truck came from Toyo Tires, which requested a build from Kris.
Kris is a custom car designer who began his successful career by simply creating amazing artwork. He ascended to recognition when one of his designs gained massive popularity on the web and was then featured in Popular Hot Rodding. Since then, his designs have improved, and several of his builds have been commissioned by many big names in the automotive industry. It’s no wonder Toyo Tires came to him for a build. 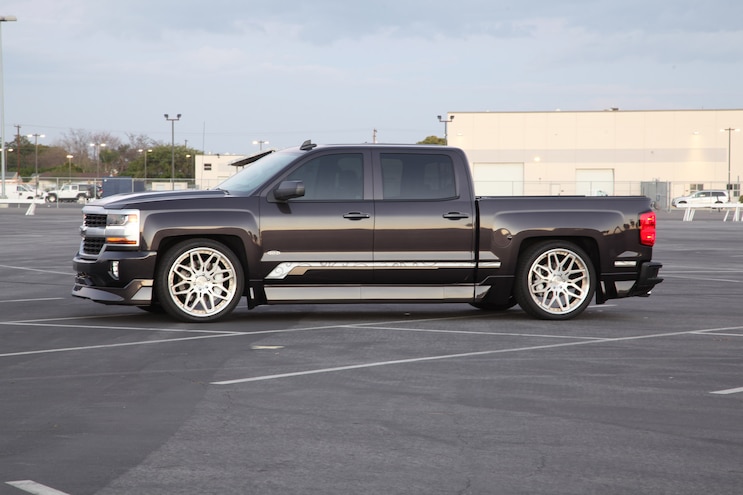 View Photo Gallery | 18 Photos
Photo 2/18   |   2016 Chevrolet Silverado 1500 Fine Whine Side View
Kris told Truckin his plans to alter the Chevy were expedited when Stan from Toyo Tires reached out to him. Stan asked Kris if he was working on any project that could potentially be used for display at SEMA. Kris replied with a lamenting “no” but quickly added that he had a truck that could be tailored for the occasion. Stan gave Kris the green light, and the build began.
This Silverado was not drastically customized, but it was given enough flair to impress and make it stand out. Under the hood, the 5.3L engine was equipped with a Whipple 2.9L supercharger for more power, and a Borla exhaust system was added to the package. Kris maintained the stock six-speed automatic transmission along with the rearend. Under the truck, the front suspension is comprised of McGaughy’s spindles and shocks with a 4-inch drop along with a Hellwig sway bar. In the rear, a McGaughy’s 6-inch drop and Air Lift helper bags were installed. Kris upgraded the brakes to Wilwood 16-inch rotors up front and 14-inch rotors out back with TC6R calipers. 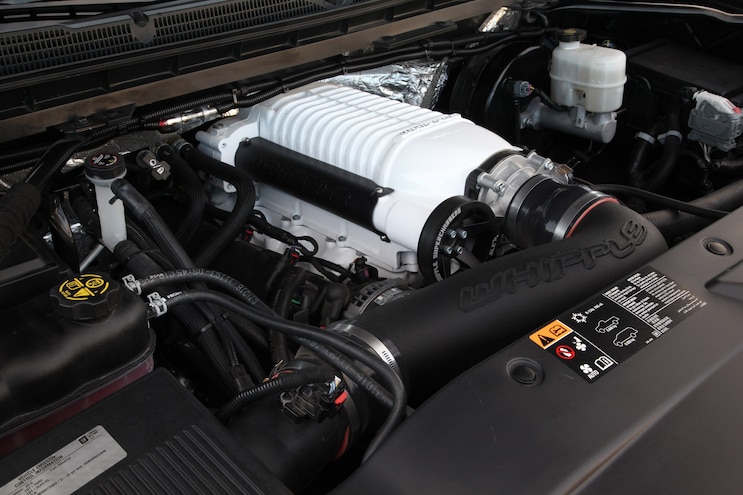 View Photo Gallery | 18 Photos
Photo 3/18   |   2016 Chevrolet Silverado 1500 Fine Whine Engine
The Silverado received an AirDesign complete body kit that gives the truck a more aggressive look. In the bed area, a BedRug bedliner was placed, and a Retrax rolling cover encloses the bed. The truck was given a tungsten gray metallic paintjob. Elegant graphics were added by 702 Graphics. To complete the subtle yet special look of the truck, “KH,” the initials for Kris Horton, emblems were positioned on the doors. For wheels and tires, Chris selected 24x10 American Force Zen three-piece wheels and Toyo Proxes STII 305/35R24 tires. 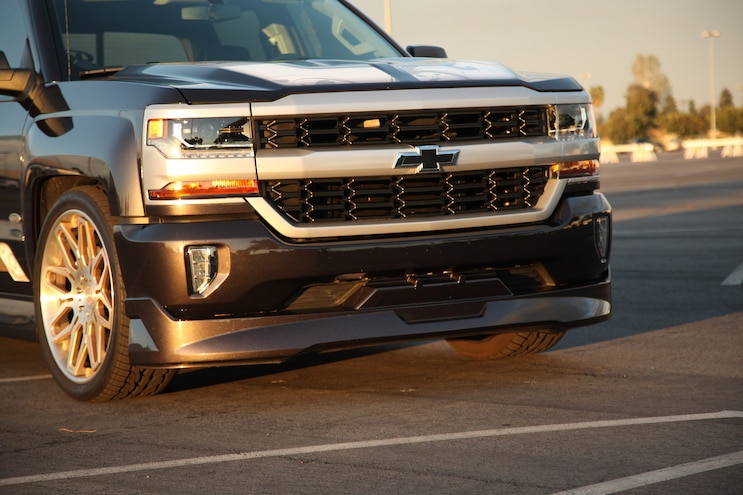 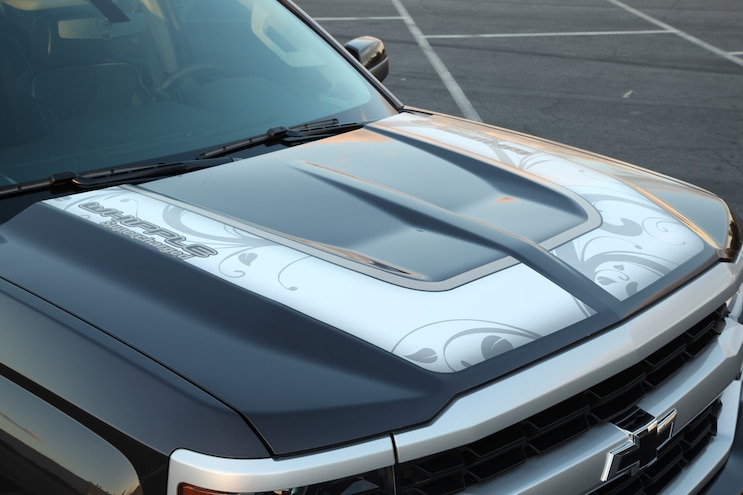 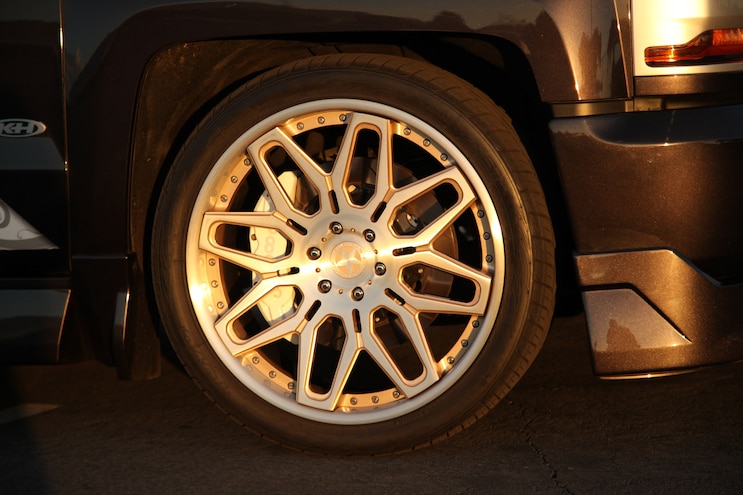 View Photo Gallery | 18 Photos
Photo 6/18   |   2016 Chevrolet Silverado 1500 Fine Whine Wheel
For Kris, having one of his builds displayed at SEMA is not an unfamiliar experience. What made this particular project different was the fact that it was completed in about two months while Kris was moving his family and company out to Las Vegas, Nevada. Kris told us the truck was mostly garage-built and it became difficult to stay on track when he was relocating, but thanks to friends—both in Corona, California, and Las Vegas—the build was possible. Kris nicknamed the Silverado “Fine Whine” due to the beautiful whine the supercharger produces. It is no doubt the Fine Whine Silverado represented Toyo Tires at SEMA with finesse. 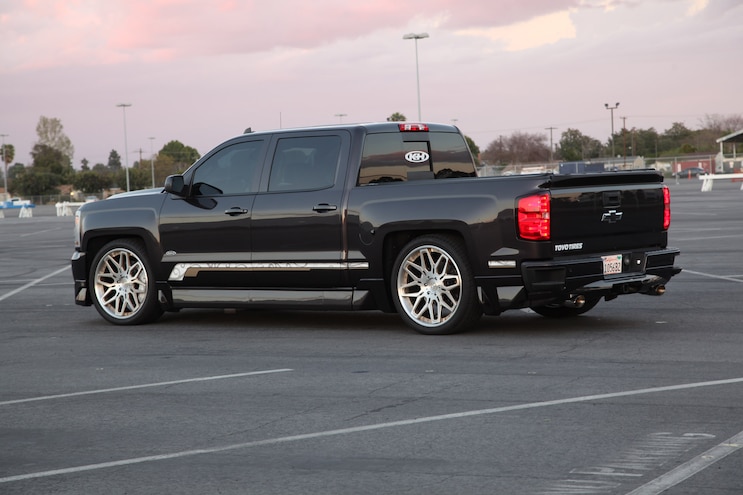