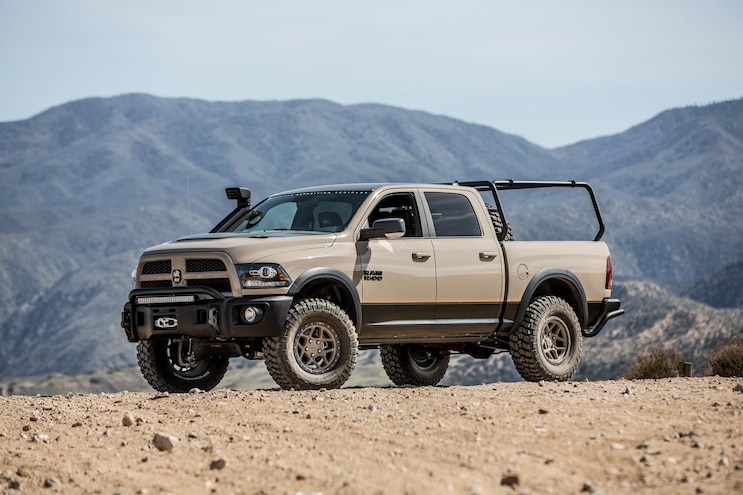 With ’19 Ram 1500 production just ramping up, it might seem odd reading about a ’17, yet there are good reasons: previous-generation Ram production will continue for a while (as the ’19 Ram 1500 Classic) since development costs were amortized long ago, the old truck is still a popular export, and there is no regular-cab version of the ’19. Lastly, because it’s an American Expedition Vehicles testbed.
AEV calls the Recruit the “light-duty truck with heavy-duty DNA,” a pronouncement that’s so far avoided a cease-and-desist letter from Alfa Romeo. In pickup terms, it’s “heavy duty” only in appearance, borrowing the AEV extractor hood and grille from a Ram HD, fender flares from the Power Wagon (with considerable effort making the flare/fender/headlight/bumper intersection look right), and load range D tires, complemented by the visual impact of AEV’s big steel bumpers and rack. Unless you count the revised tailpipes and electronic recalibration for everything driven off the speed sensors, there are no changes to the engine, gearboxes, brakes, or differentials. 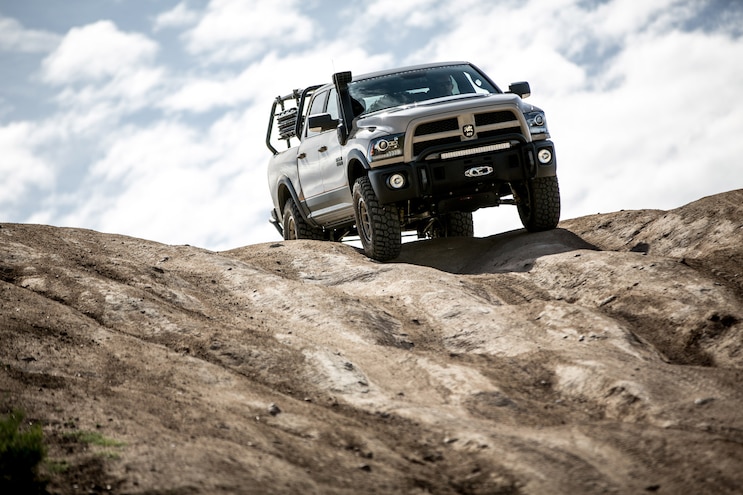 View Photo Gallery | 36 Photos
Photo 2/36   |   AEV Ram 1500
Those differentials are why you can build a Recruit on any 1500 that has four-wheel drive and 3.92:1 gears; changing the axle ratio or adding a locker requires parts-swapping that AEV doesn’t find cost-effective. Our brief test drive didn’t include climbing a wall, yet we don’t expect gearing to be an issue given the automatic’s 4.7:1 First—though you will have to stir the converter or get the diesel’s turbo wound up a bit.
We expect nice steel work from AEV, and this truck doesn’t disappoint; with stout bumpers and the one-piece cargo rack, you have to buy with the truck because it’s a bitch to ship. Cast-aluminum tow loops meet or exceed OE ratings and serve as “ramps” at the limits of approach and departure angles. Hearing “cast aluminum” and “rock ramp” together caused my inner pessimist to inquire if they are available separately and easily replaced: Yes. 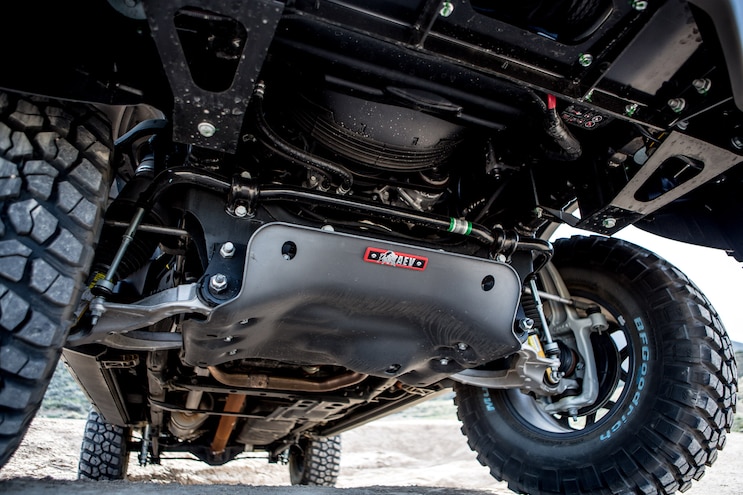 View Photo Gallery | 36 Photos
Photo 3/36   |   AEV Ram 1500 Under
This sample Recruit also came fully dressed, with inboard and outboard Vision X lights up front, raised air intake system (the ram-air looks the part, the pre-filter a bit too “flathead carburetor” for us), special paint treatment for 18x8.5 Mesa wheels, Warn Zeon 10-S winch, toolbox, ARB fridge, bed-mount spare, obligatory labels, switch pod, and a potential new upholstery leather/Cordura upholstery scheme we’re in favor of.
However, it’s the “dual-sport” suspension system that’s the heart of the Recruit. Essentially a well-engineered 4-inch lift, it keeps geometry stable, lowers the differential behind a 4mm steel skidplate, and uses factory antiroll bars and front control arms connected to AEV’s knuckle. It’s now available for air-suspension trucks, like the Rebel tested, wherein the front Bilstein air struts and the rear airbags are retained but rear shocks are changed to AEV’s proprietary 5100s. Bushings are kept as close to stock as possible for durability and isolation, and at the Rebel’s normal ride height (3 of 4 bars), the front CV shafts are damn near level.
Normally, Recruit rides on 35-inch BFG KO2 all-terrains or optional 36-inch Toyo Open Country mud-terrains. This development testbed was sporting 37x12.5R18 BFG mud-terrains running 40 psi warm, which required just a bit of trimming and bumpstop tuning for clearance. Unless your trailer brakes fail, you charge downhill without downshifting, or generally drive like a bozo, the 100 pounds of rotating mass and larger diameter shouldn’t be an issue. 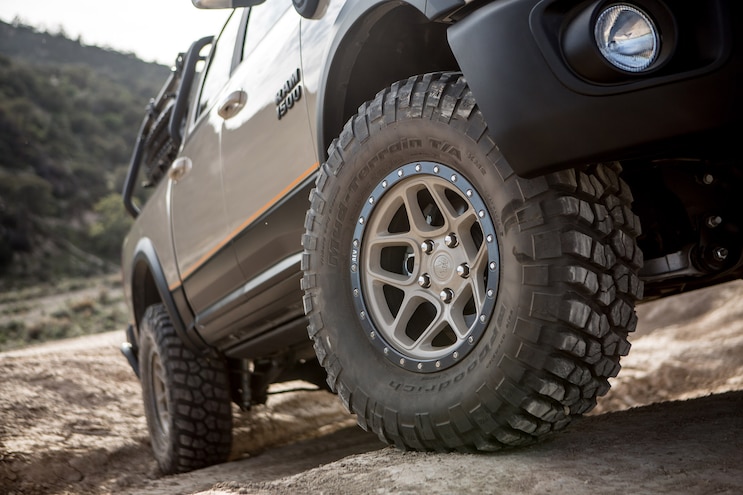 View Photo Gallery | 36 Photos
Photo 4/36   |   AEV Ram 1500 Wheel
The first thing you’ll notice is the plushest ride you’ve ever experienced behind a Ram HD hood, including a Power Wagon. Stock spring and front shock rates and more sidewall only improve an air-sprung Rebel’s ride and don’t add any glaring vices. Yes, you can feel it’s higher and steering input and brake pedal require a modicum greater effort, but the pace would be considerably slower than a stock truck only in the rain.
Having driven primarily stock Rams of all flavors, our sightline calibration was way off. Not only is the truck 4 inches higher but the HD hood also amplifies the issue and we kept looking for real mirrors and training wheels in them. It’s not really a problem on open terrain, save the delay between sky filling the windshield and front tires reaching the crest of the hill that brings back memories of Forward Controls. You’ll also notice more engine noise simply because added weight and aero drag require more horsepower to move, and the cylinder deactivation seems to work in shorter bursts, perhaps where it’s programmed to think it can get by on four, but almost immediately exceeds the load at which it reverts to full count. 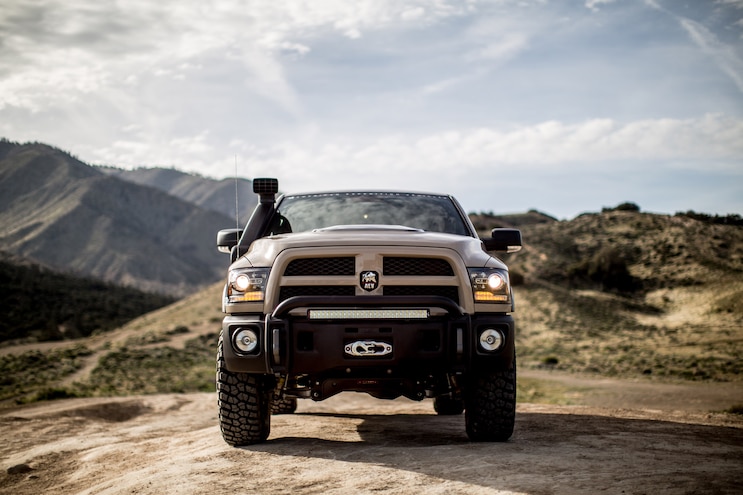 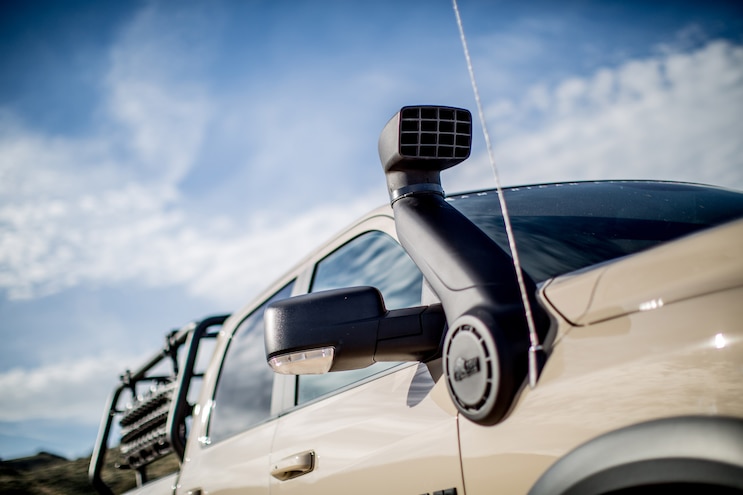 View Photo Gallery | 36 Photos
Photo 6/36   |   AEV Ram 1500 Snorkel
On the open trail, the Recruit is good fun and quite capable. Increased ground clearance and larger tires make everything, including going faster, much easier. Our lead vehicle was an early fullsize Bronco with 15 inches of travel, and you get the impression it’d be horsepower that pulled it away more than suspension or tires. Inquiries about a 6.4 or 6.2 crate engine for a Recruit were answered, “We wish.”
Much of this invites comparisons to a Raptor and, to a lesser extent, a ZR2 (AEV also has a Colorado-based product). Those trucks might make better time at high speeds, but when you reach the point where an inch makes a difference, the Recruit may keep going where the others don’t. However, knowing a Ram 1500’s GVWR range and the weight of steel, tires, and a 70-pounds-empty fridge, the Recruit may have only minimal load advantage over a Raptor, so you have to pack light in both of them or plan on a small off-road trailer. 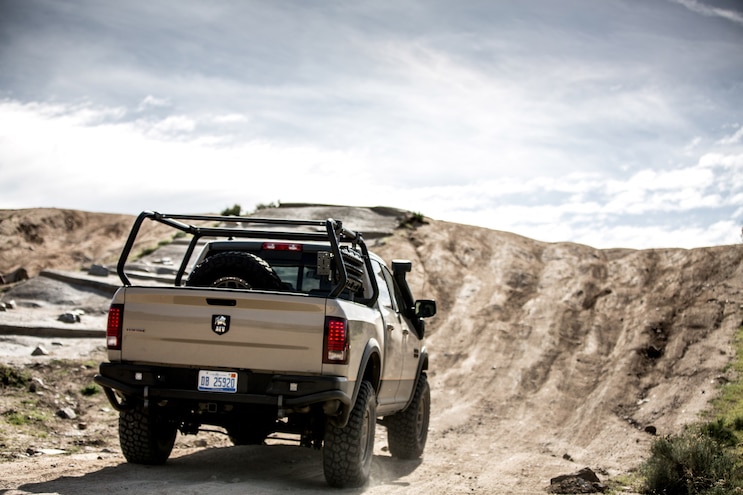