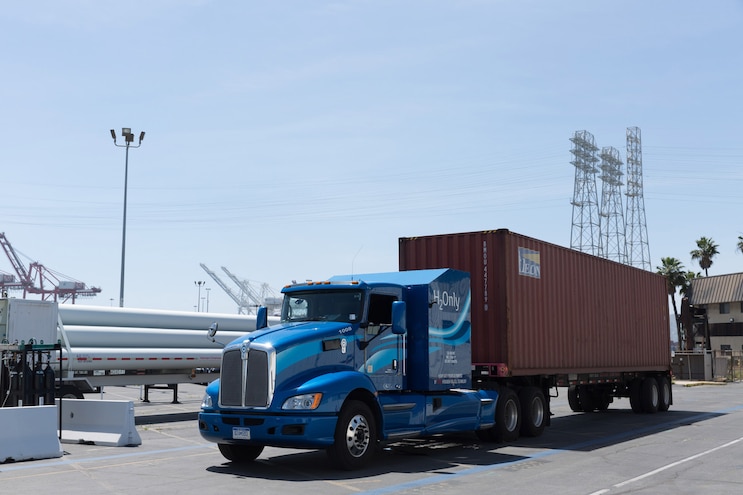 In April 2017, Toyota announced an ambitious plan to take components out of its hydrogen fuel cell Mirai and put them into a Class 8 truck. The idea was simple: reduce the pollution in the Los Angeles–Long Beach port complex with an alternative fuel. Six months later, Toyota started testing its Project Portal. Recently, we took an exclusive ride around the ports to see this one-of-a-kind truck in action.
Our day begins like any other typical day in the Los Angeles–Long Beach port complex for veteran truck driver Danny Gamboa. He makes sure the truck is fueled and road-compliant for various rules and regulations, and we climb into the cabin.
Releasing a familiar hiss as the air brakes let out, the truck rolls forward out of Toyota’s depot and heads toward the ports. Immediately, it is apparent to our ears something is much different compared to the diesel trucks. 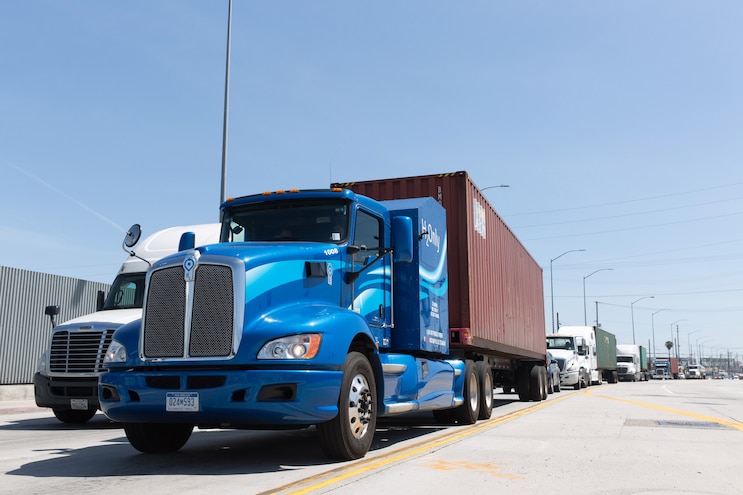 View Photo Gallery | 12 Photos
Photo 2/12   |   Portal POLB Activity
“One of the things I noticed when I first started driving on the streets is how I can hear the suspension,” Gamboa said. “In a typical diesel truck, you can’t hear any of that stuff. You basically blast the stereo because all you can hear is the engine. This Project Portal is so quiet.”
The streets surrounding the Los Angeles–Long Beach port complex are a mishmash of residential housing, schools, interstates, shipping depots, and docks all intertwined in a hastily arranged city. Every day, 19,000 cargo containers are moved out of these ports with diesel-powered “drayage” trucks, short-run cargo movers. The ports, surrounded by children and families enjoying the weather, are the largest single source of air pollution in Southern California.
Even though the air quality isn’t great, the ports can’t afford to slow down. In 2018, the Port of Los Angeles had the busiest February in its 111-year history, and the Port of Long Beach reported a 32 percent increase compared to 2017, according to a Transport Topics report. These ports need to continue growing to meet demands, yet they are faced with meeting new and more stringent air-quality standards. The Los Angeles–Long Beach port complex approved plans in November 2017 to phase out diesel trucks in favor of natural gas and other low-emission powertrains by 2035. 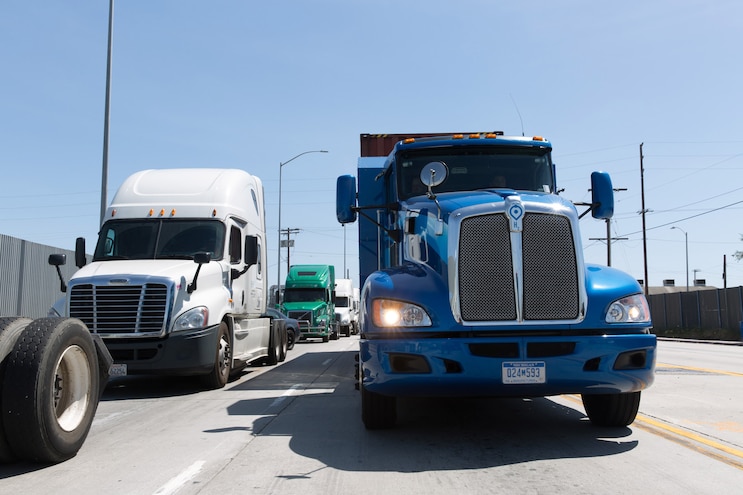 View Photo Gallery | 12 Photos
Photo 3/12   |   Portal POLB Activity Drive
Toyota plans to meet that goal and then some, thanks to zero-emissions fuel-cell technology.
After building the Project Portal using two Mirai fuel stacks and an electric motor producing 670 hp and 1375 lb-ft of torque (capable of hauling 80,000 pounds more than 200 miles), the team is set on putting the truck to work testing out the concept. Project Portal has been on the job since October 2017. Through a partnership with Southern Counties Express, Toyota’s parts shipper, Project Portal logs around 10 hours a day with Gamboa behind the wheel delivering cargo back and forth from ports to distribution centers. He mostly hauls Toyota parts like bumpers, airbags, and batteries for EV cars and hybrids.
Riding shotgun with Gamboa in the truck with the windows down on this warm day, you can hear the familiar rumbling of the diesel engines all around us. Four lanes of traffic are often filled with trucks making similar runs. Many of these truck drivers are curious about the new truck and stare openly as we pass by. We get several thumbs-ups as they realize what the truck is fueled with. 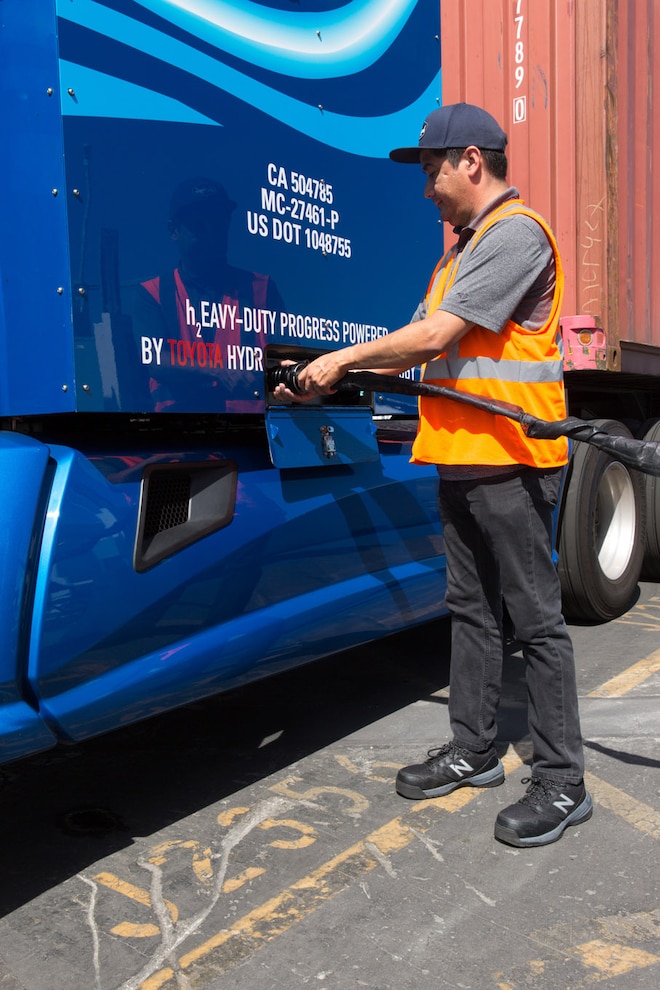 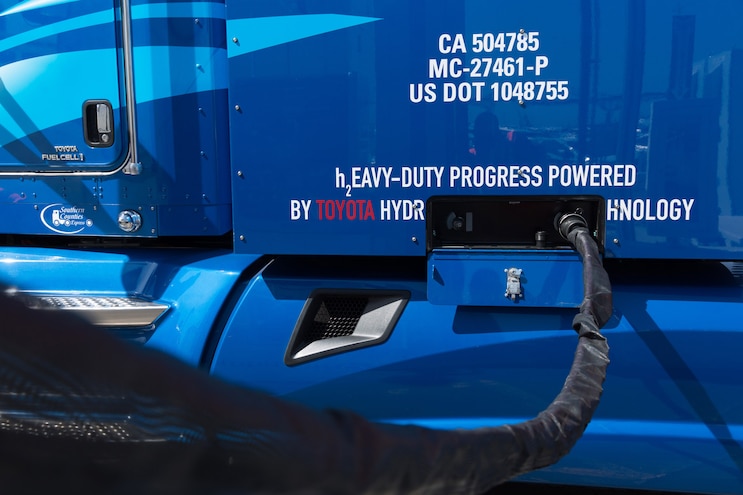 View Photo Gallery | 12 Photos
Photo 5/12   |   Portal POLB Activity Fueling Pt2
For years, the ports have tried to lure in different companies to produce alternative-fuel solutions. Many of these companies have the ability to produce a concept, but they don’t have the resources to go much further. The fact is a company the size of Toyota working on this project hasn’t been done before.
“Having a respected equipment manufacturer the size of Toyota to be involved in the development of a hybrid technology is very exciting to us,” said Chris Cannon, Director of Environmental Management, Port of Los Angeles.
With the Project Portal proving the hydrogen fuel-cell technology can, in fact, be a solution to the pollution problem in the area, Toyota’s team is working on where to go next, including a larger fueling station. 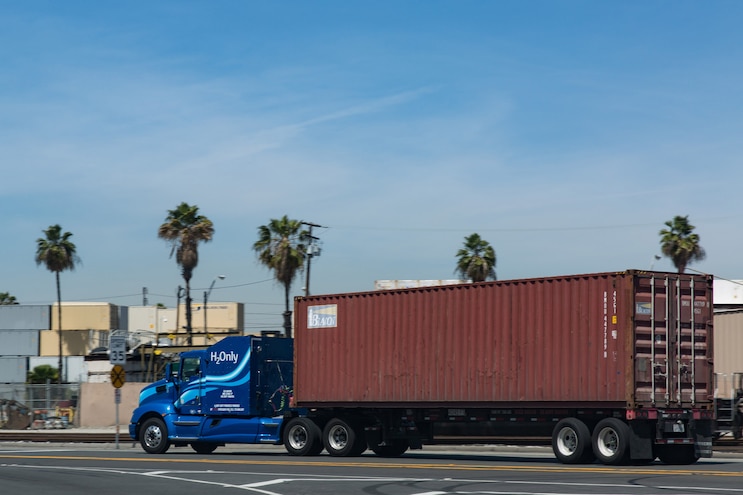 View Photo Gallery | 12 Photos
Photo 6/12   |   Portal POLB Activity Departure
“We are building the world’s largest heavy-duty hydrogen fueling station right now and should be finished by next year,” said Craig Scott, Senior Manager, Advanced Business Strategy, Toyota Motor North America. “The fueling station will have six nozzles and provide more than a ton of hydrogen per day. It will be three times larger than any other light-duty station in the world.”
Scott says even with a station that large, they will only be able to handle about 25 trucks a day. If it were built for cars, the station would provide up to 2,000 cars a day. Currently, fueling up the Project Portal takes 25 minutes for its 200-mile range. A fast fill up can be a convenience for the driver and the shipping company, but the real factor is the cost. Currently, hydrogen costs more per kilogram than diesel fuel with hydrogen running around “$13.99 per kg (equivalent on a price per energy basis to $5.60 per gallon of gasoline),” according to the California Fuel Cell Partnership.
With the infrastructure expansion driven by commercial-truck needs, consumers wanting better fuel economy, and air quality a concern for everyone, Toyota is at the forefront of what could be a radical change in the automotive industry. A quiet, smooth-riding Class 8 truck emitting water vapors could be the forebear to new more powerful and fuel-efficient lineup of Toyota cars, SUVs and pickups. If Toyota can prove a hydrogen fuel-cell semi works, why not Tundra?