50 Canceled Date Nights Worth of Custom 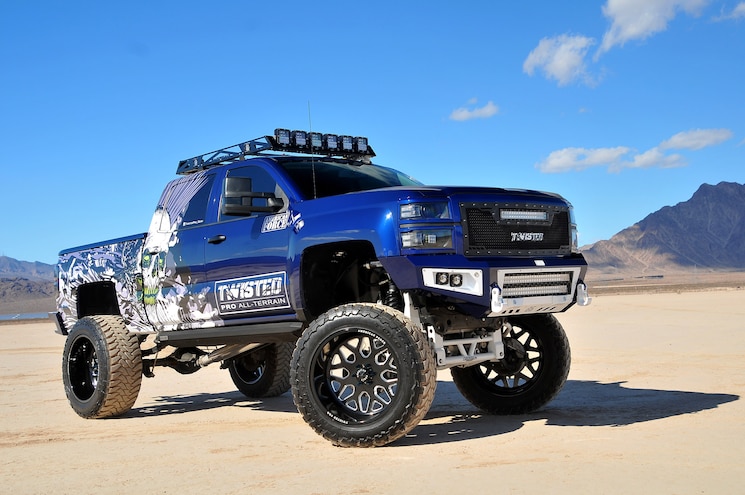 There are all walks of life submerged deep inside the truck culture, and one of the biggest is military personnel. A large contingent of our armed forces seems to enjoy custom truck building. Sean Dasher enlisted in the United States Army at 19 years old in order to be a better man for himself and his wife Sam. While enlisted, he became part of an all-military mudding club in Fort Hood, Texas, and he and the club began looking for a way to raise awareness and money for military charities.
Sean took the initiative to learn about LED lighting and, once assigned to Fort Stewart, Georgia, he began pushing the idea of making LED lights and selling them to others. In 2015, he was severely injured while on his final deployment, and he medically retired from the Army. While back home, Sean started building a lighting company called Twisted Pro All-Terrain with his close-knit, all-veteran crew. Over the next few years, they built many trucks for customers, and soon Sean got the itch for his own full-blown build. 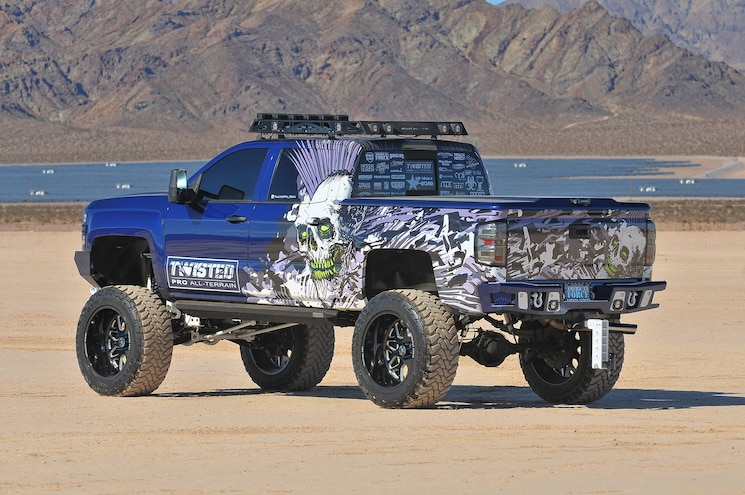 View Photo Gallery | 13 Photos
Photo 2/13   |   2014 Chevy Silverado LTZ Vigilance Rear
Relocating to Jacksonville, Florida, Sean decided he wanted a Chevy Silverado, but he wanted the new truck to be a specific color. Luckily, 2014 was the first year the Luxurious Blue Metallic shade was available, and he purchased the blank canvas. With only a month until SEMA, Sean knew he wouldn’t be able to get the build done, so he finished working on the projects his company had until December, when the Chevy was brought in for its overhaul. 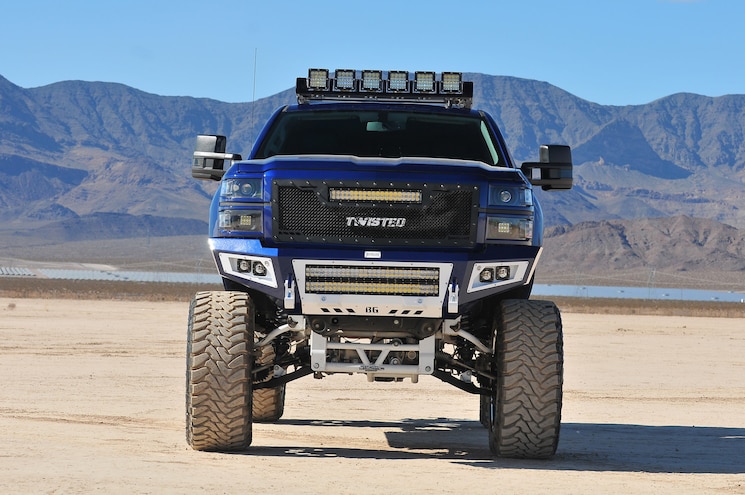 View Photo Gallery | 13 Photos
Photo 3/13   |   2014 Chevy Silverado LTZ Vigilance Front
The first step was enlisting AllStarz OffRoad in Orange Park, Florida, where the 12-inch Bulletproof lift was added, bringing the new Silverado well above stock heights. Sean chose a set of 24-inch American Force Flux wheels with Toyo 40s. A 2-inch lift was added to the body to give the truck better clearance. Sean also added a Bully Dog cold-air intake and a BDX Tuner to allow the truck to run smoothly with the new lift and large tires. 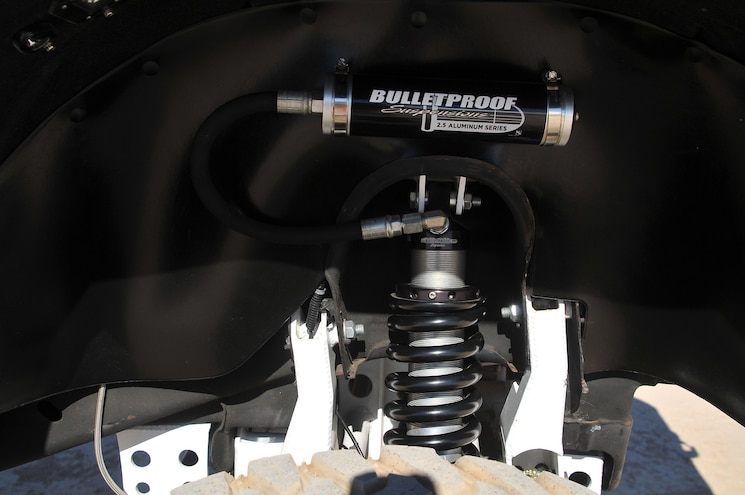 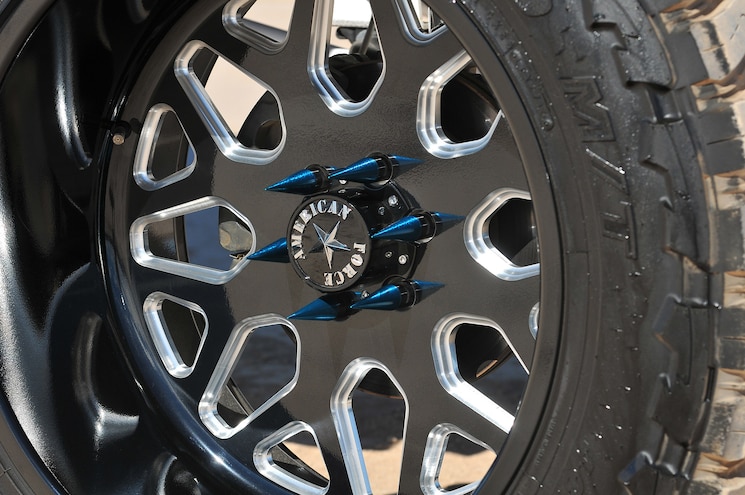 View Photo Gallery | 13 Photos
Photo 5/13   |   2014 Chevy Silverado LTZ Vigilance Wheel
When it came time to update the exterior to match the new additions, Sean did his research. “I had seen Leif Alvarsson’s work on a couple of my friends’ trucks,” Sean tells Truckin. “His masterpieces stood out above everyone else.” Sean and Leif brainstormed for six months to create a half-wrap that expressed not only his style but Sean’s personality as well. Apli Concepts installed the wrap, which was printed on Avery Dennison vinyl.
Sean utilized his expertise in lighting, adding Bodyguard bumpers front and back to showcase his light products. “The bumpers were a perfect choice,” Sean adds. “They were designed around the idea of using more lighting.” Sean installed an RC Pro from Ride Controller to run all the lighting and train horns. And since the Nightmare 244 train horn kit was installed in Sean’s shop, he feels he must apologize for “making just about everyone who helped with the truck deaf at some point from those horns.” 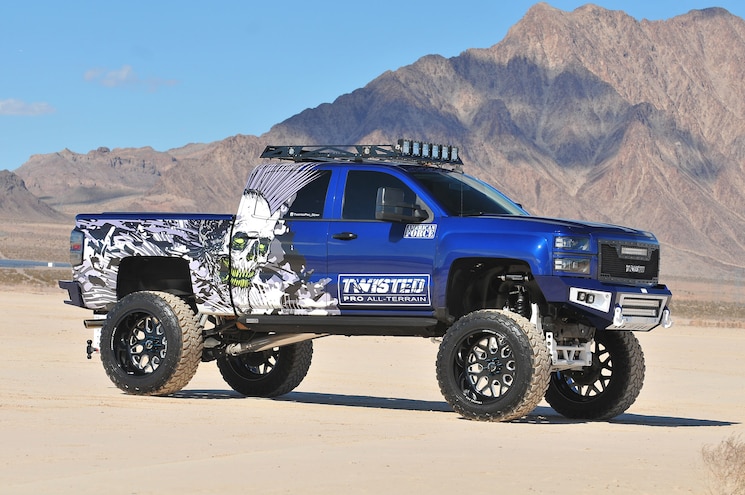 View Photo Gallery | 13 Photos
Photo 6/13   |   2014 Chevy Silverado LTZ Vigilance
Once the Silverado was completed, Sean proudly displayed it at the American Force booth at SEMA in Las Vegas. Sean wishes to thank his beautiful wife, Sam, for supporting him and putting up with the long days he’s had while working on the truck. Throughout the build, he’s estimated that he’s had to cancel more than 50 date nights in order to bring his custom dream to fruition. A special thanks goes to Chris at AllStarz OffRoad for also putting in long nights to complete the Chevy. Last and most certainly not least, Sean wishes to thank all his personal friends who are still active duty—Army men and women who share a love and passion for trucks, which brings them all that much closer to each other.