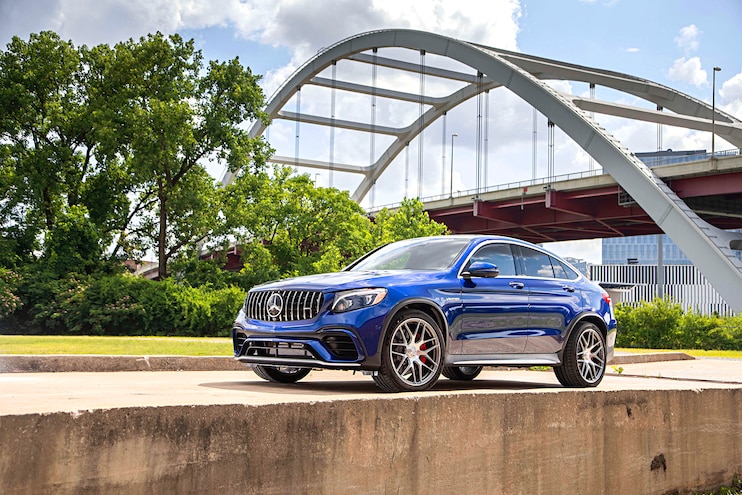 When us less sophisticated truck folk get to thinking about powerful SUVs, our minds quickly wander to the SRT variants of the Jeep Grand Cherokee and Dodge Durango. They are built here in the States by an American company and represent less of the computer age and more muscle car. They are comfortable and familiar—our safe space, if you will. The reality is, however, that if we just open our eyes and look around, the world is a great, big place full of ridiculously powerful family haulers.
Mercedes-Benz has a reputation worldwide for building some of the best luxury vehicles for consumers. Less known, perhaps, is that there’s a subsidiary of Mercedes tasked with taking the company’s ordinary luxury vehicles and cranking them up to 11. This is the mission of Mercedes-AMG or, as it is more commonly known, AMG. Thankfully, the team of AMG mad scientists masquerading as engineers doesn’t discriminate and provided the world with the new-for-’18 AMG GLC 63 and GLC 63 Coupe. 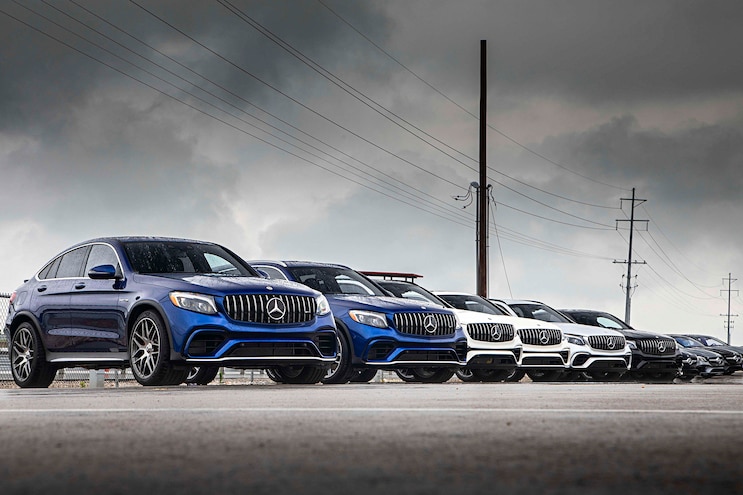 View Photo Gallery | 23 Photos
Photo 2/23   |   AMG GLC 63 Lineup
We’re not going to lie, when the invitation to join AMG in Tennessee for what the company dubbed its “Fast Family Haulers” event crossed our desk, we were excited at the possibility of driving the new G 63, along with perhaps the full line of AMG SUVs. So we were a tad saddened to find only the GLC 63 on the itinerary when the time came, but the feelings were fleeting, as the midsize GLC does not disappoint. In standard, non-AMG trim, the GLC 300 comes equipped with a decent list of standard features and is powered by a turbocharged 2.0L I-4 engine churning out 241 hp. That’s all fine and dandy for your average Sunday-morning driver, but jump up to the AMG GLC 43 and a turbocharged 3.0L V-6 finds its way under the hood and brings 362 ponies with it. Better, but that’s still not good enough for us. The ride we were there to sample was the top-tier GLC 63, which features a handcrafted and turbocharged AMG 4.0L V-8 that pumps out 469 hp and 479 lb-ft of torque. Still not enough to get excited about, you say? Well, then the GLC 63 S Coupe is what you’re looking for, which produces 503 hp and 516 lb-ft of torque from the same 4.0L V-8. 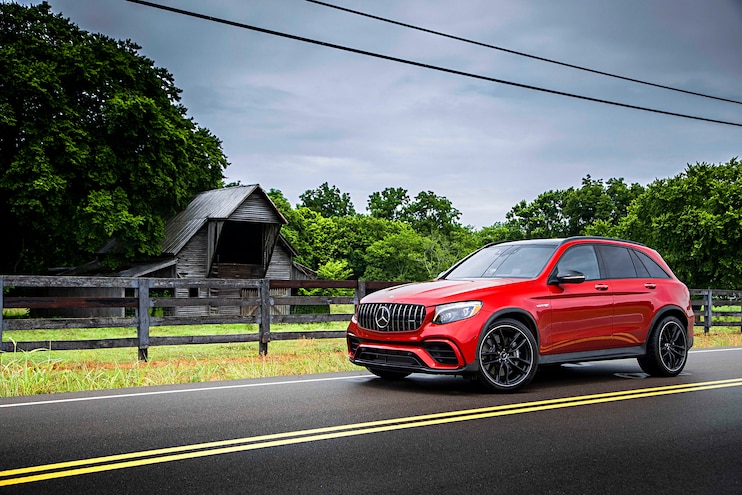 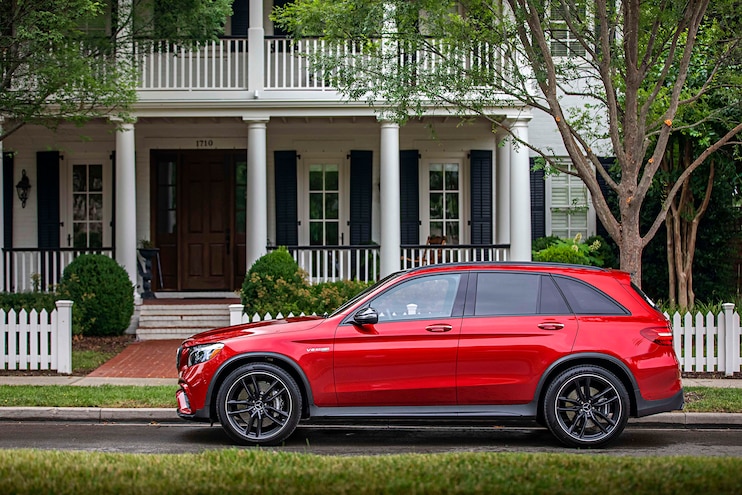 View Photo Gallery | 23 Photos
Photo 4/23   |   AMG GLC 63 Side
Jumping up to the top-tier GLC 63 brings on a host of other changes as well. Behind the engine is the AMG SpeedShift multi-clutch nine-speed automatic transmission. Power is routed from there to each corner through the AMG Performance 4MATIC+ all-wheel-drive system, which features fully variable torque distribution (as opposed to the fixed 31:69 split of the standard system). The rear axle has a mechanical limited-slip differential, and the whole lot rides on AMG’s air body control suspension. A performance exhaust system is optional, but really, why would you not?
It was immediately apparent as we set off on our drive from the urban sprawl of Nashville and out into the hill country that this isn’t your grandma’s Mercedes. Slipping behind the wheel feels as if you’re in any modern luxury vehicle. It’s comfortable, quiet, and elegant. The screens are bright and plentiful and all of the touch points are soft. However, creeping up the first hill as we pulled out of the lot, chatter from the multi-clutch transmission made itself apparent. While not out of the ordinary, it was our first indication that something was different about this one. Then the light turned green and with a light rap of the go pedal, the GLC shot off like a rocket. This was going to be a fun day. 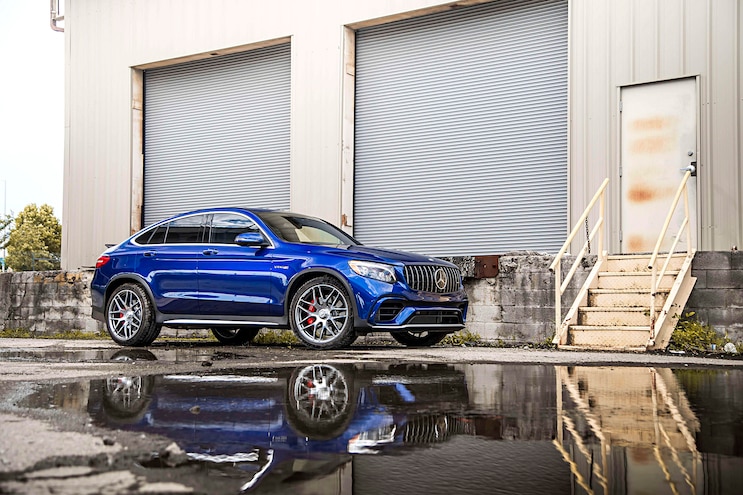 View Photo Gallery | 23 Photos
Photo 5/23   |   AMG GLC 63 S
Power from the 4.0L V-8 is plentiful and immediate, with the nine-speed automatic cracking off shifts quicker than conceivably possible. The company claims a 0-60 time of just 3.8 seconds (3.7 for the S Coupe) and an electronically limited top speed of 155 (174 for the S Coupe). A quick press of the exhaust button on the dash activates the active exhaust system and really lets the ponies scream. With Sport mode selected and the exhaust activated, our inner juvenile was released, causing us to drive like pure A-holes until we were able to regain composure. It was amazing, and for those brief moments we forgot we were piloting a five-passenger SUV.
Steering is properly heavy, as you’d expect from a performance vehicle. It does, however, lack a good on-center feel and doesn’t naturally like to return to center as one would expect. This took a bit of getting used too, but wasn’t enough to dampen our experience. Ride quality is superb: smooth and well-controlled. It was just as happy hugging apexes as it was dampening out road undulations and potholes. Even with large wheels and skinny tires, the GLC was incredibly quiet rolling down the road, with very little in the way of felt road vibration or harshness. This is one of those areas where you definitely get what you pay for. 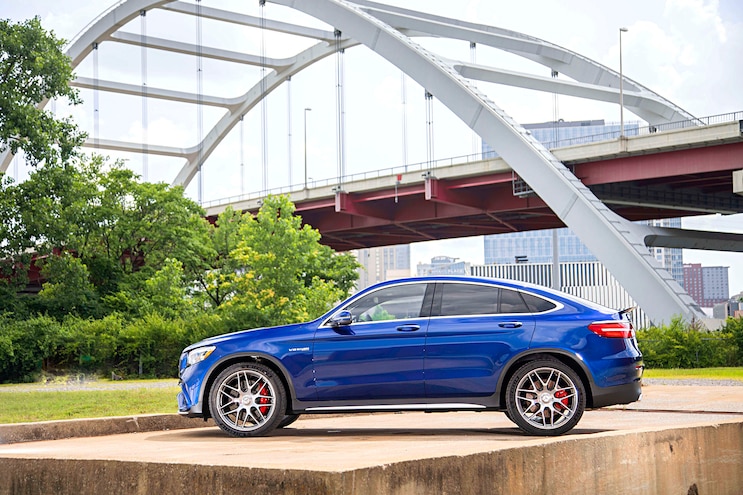 View Photo Gallery | 23 Photos
Photo 6/23   |   AMG GLC 63 S Side
We did face a bit of frustration with the infotainment interface, but that’s likely more our lack of experience than an actual issue. The head-up display is useful, and we’re fans of a good ambient light package; despite what others may say, GLC has a nice one. And the new expressive front-end design with AMG’s Panamerican grille will surely turn heads while waiting in the pickup line.
We’re still not completely sold on the Coupe. While it looks slick from the outside, that translates into less storage space and headroom on the inside. All things equal, we’d take the standard GLC 63, but the bump in power that comes with the GLC 63 S Coupe and the electronic limited-slip differential might be enough to sway us.
As our drive concluded, we were sad to hand over the key fob and walk away from our new friend. We had bonded during our day of corner-carving, aggressive passing, and spirited jaunts from light to light. So if you have to give up the sports car for a family hauler, why not an AMG version? With plenty of power to avoid hazards, all-wheel drive for when the road gets slick, seating for five, and loads of cargo space, the AMG GLC 63 is both practical and safe. And isn’t that what fast family hauling is all about?