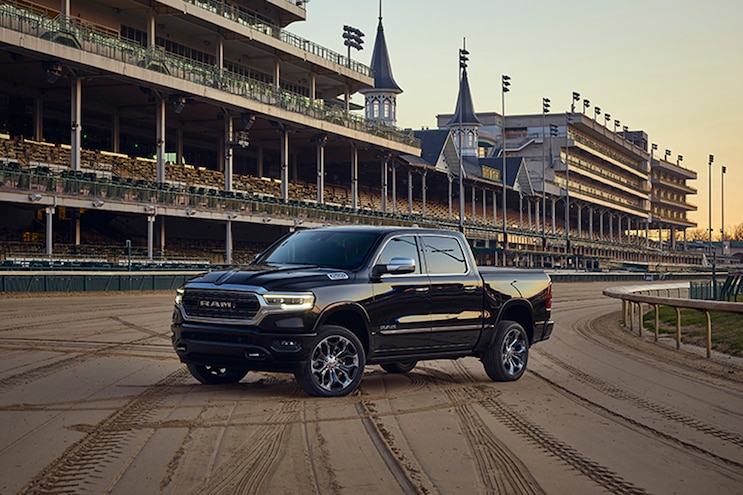 As we know, Ram’s all-new ’19 1500 pickups are substantially improved over the previous generation. They are stiffer and stronger, yet average 225 pounds lighter, with higher max payload and tow ratings. Their interiors are plusher and their bodies slicker thanks to active grille shutters, a retracting front air dam, and class-exclusive available air suspension. Their new 4x4 Off-Road Package offers an electronic locking rear axle, tuned shocks, and Hill-Descent Control, and new Frequency Response Damping (FRD) helps deliver arguably best-in-class ride.
But what is likely these new Rams’ most significant new feature is an industry-exclusive eTorque 48-volt, mild-hybrid system that improves fuel economy, driveability, and powertrain smoothness. Standard on the base 3.6L Pentastar V-6 and a $1,450 option on the available 5.7L HEMI V-8, it replaces the engine’s traditional alternator with a beltdriven motor/generator that adds torque (so the engine contributes less) on launch, smooths the eight-speed automatic’s shifts, and recovers energy (to a suitcase-size, lithium-ion battery mounted behind the seat on the rear cabin wall) through regenerative braking during coasting and deceleration. 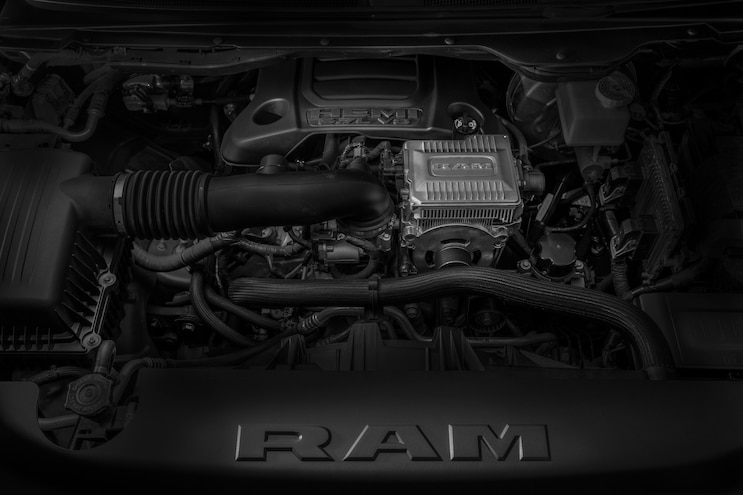 View Photo Gallery | 14 Photos
Photo 2/14   |   First Drive 2019 Ram 1500 ETorque Mild Hybrid Engine
The upgraded standard eTorque V-6 puts out a healthy 305 hp and 269 lb-ft of torque. The Hemi V-8 (with or without eTorque) generates 395 horses and 410 lb-ft of torque with Fuel Saver Technology (cylinder deactivation) that turns off fuel and spark and closes the valves on four of the engine’s eight cylinders during light-load operation. Variable cam timing improves efficiency with delayed intake-valve closing that extends combustion expansion, and a new electric cooling fan tailors its energy draw to cooling demand.
While eTorque can briefly deliver up to 90 lb-ft to the V-6 and 130 lb-ft to the V-8 to aid initial launch, it does not add to either engine’s maximum torque rating. “They provide an e-roll assist to get the truck rolling, after which the torque curve of the engine ramps up quickly and the e-motor hands off to the engine,” FCA spokesman Nick Cappa explains. “The benefit is much greater fuel efficiency on the initial start from a zero-speed condition. The 0-60 times of the eTorque Hemi are nearly identical to a non-eTorque Hemi.” 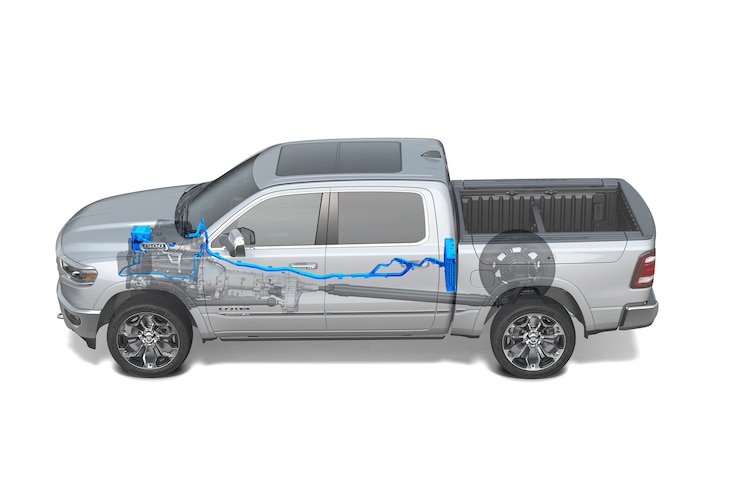 View Photo Gallery | 14 Photos
Photo 3/14   |   First Drive 2019 Ram 1500 ETorque Mild Hybrid
FCA says the system adds 2-3 mpg, depending on trim and powertrain, and can extend driving range to 600-plus miles. The EPA’s test numbers back up that fuel-economy claim: A 4x2 V-8 with eTorque gets 17 city/23 highway/19 combined mpg, compared to the base 4x2 V-8’s 15/22/17 (either 4x4 gets 1 mpg less on the highway). The 4x2 eTorque V-6 gets 20/25/22 mpg—4x4s lose 1 mpg across the board.
It also adds perceptible smoothness through the six “customer experiences” defined by Brian Spohn, vehicle electrification manager for FCA Powertrain Engineering. Experience Number One is sitting at rest with the engine off thanks to standard AutoStop (for up to 10 minutes) with the 12V systems, including HVAC, fully supported. In some vehicles, AutoStop (aka Stop/Start) can be annoying because the engine shakes when it shuts down, then again when it restarts. But it’s nearly imperceptible in this one. You can turn it off, “but why would you?” Spohn asks, since it can save 1.7 ounces of gas during a typical 90-second stop in a HEMI V-8 Ram, which typically happens 10 times each driving day. 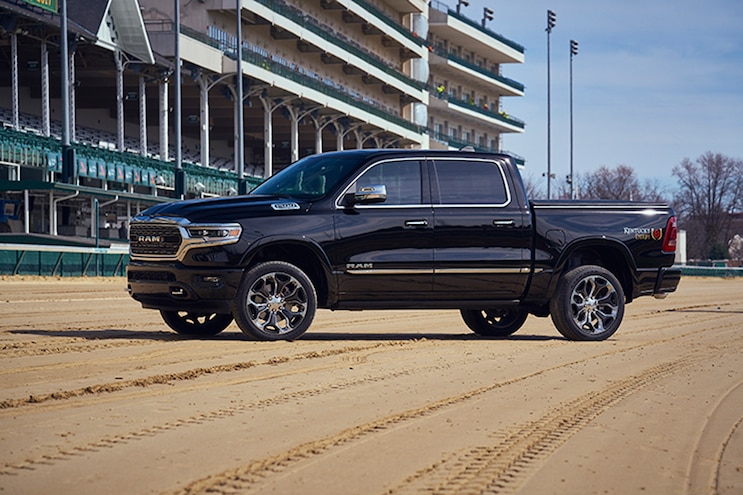 View Photo Gallery | 14 Photos
Photo 4/14   |   First Drive 2019 Ram 1500 ETorque Mild Hybrid Side
Number Two is “AutoStart with e-roll assist,” when the motor provides that added launch torque so the engine doesn’t have to, then hands off to the engine in the first half-tire rotation. Three is “Acceleration and Shifting,” when eTorque smooths each shift and recovers energy to optimize efficiency. “We’re doing active torque control with the motor to help reduce engine speed across shifts,” Spohn explains. “The motor can tick up or pull down engine speed with a little supplemental nugget of recaptured energy.”
Four is “Cruising Speeds,” when it reduces engine parasitic drag and adds efficiency. “In those conditions,” he says, “we have the same functionality as with the AutoStop to power the 12-volt system with the 48-volt battery and allow the motor to freewheel at times rather than have it do a little work with switching and other losses.”
Five is “Deceleration and Downshifting,” when it shuts off fuel, reduces pumping work, regenerates energy (the motor becomes a generator), and smooths downshifts. “We reduce the pumping work the engine is doing to decelerate the vehicle while slightly improving the regenerative capacity of the motor to maintain consistent deceleration feel,” he says.
Six is “Regenerative Braking,” when the motor/generator adds braking torque and blends it with friction braking if needed. “There’s a transition from the first eighth of an inch of pedal response,” Spohn says. “We start the motor to become more aggressive with the deceleration and add the friction on top of that.” 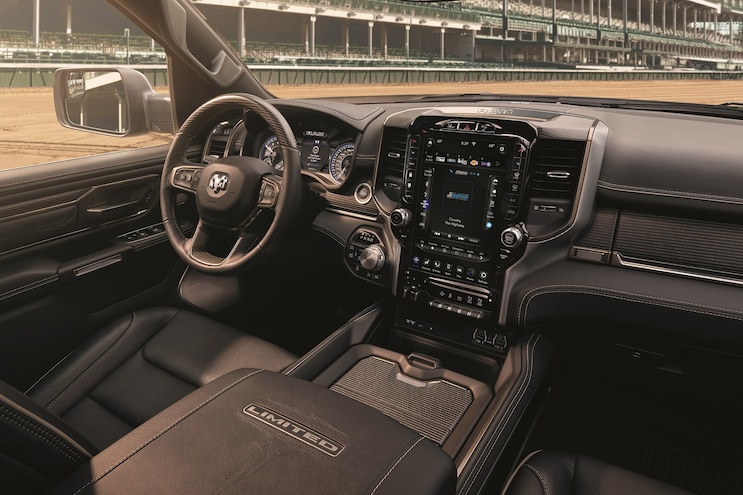 View Photo Gallery | 14 Photos
Photo 5/14   |   First Drive 2019 Ram 1500 ETorque Mild Hybrid Interior
All this meticulously developed electro-mechanical wizardry results in a remarkably smooth and quiet ride for any vehicle, let alone a heavy pickup truck. The eTorque system is totally transparent, and even the V-6’s (unloaded) launch and acceleration from most any speed is impressive. Stop at a light, the tach drops to zero. Lift off the brake, it jumps to a smooth 600-rpm idle. Engine shake is barely perceptible both ways, and there is no delay in launch response. In 48 miles of mostly two-lane cruising with three aboard our Ram 1500 Lone Star Crew Cab 4x4, we averaged 17.6 mpg. The trip computer of a V-6 Ram that we jumped into later said 24.3 mpg, but driving it hard on short local loops dropped that to 16.1 mpg. Back in our test V-8 Ram, the final 16-mile easy cruise back to our base yielded 23.2 mpg. We also towed a 3,500-pound trailer with an eTorque V-8 and barely noticed it.
We expect this complex but excellent system to spread to the Jeep Grand Cherokee and other FCA vehicles, most likely as an option because it does add cost. Will we see it on a future diesel engine? Spohn wouldn’t say, but reminded us that diesels already have good torque and efficiency and much higher cost. So probably not.

- OF
By Gary Witzenburg
91 Articles