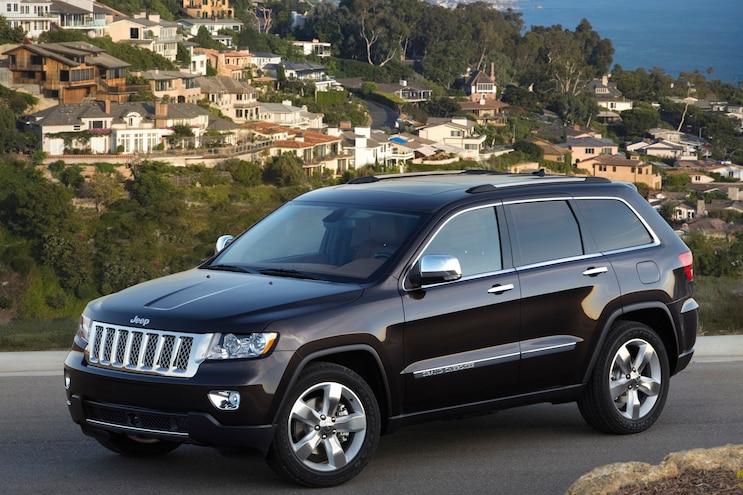 The Grand Cherokee wasn’t so much redesigned for ’11 as reinvented. After years of being a typical American SUV with low-rent cabin materials, patchy reliability, wobbly build quality, and a considerable thirst for gasoline, this generation (the fourth) immediately became a major player in its class.
Jeep’s midsize SUV leans toward the luxurious. It’s certainly more refined than its predecessor, with a much stiffer structure that brings benefits in noise, vibration, harshness, and occupant protection. The way this Grand Cherokee drives is so much more composed than the version it replaced. 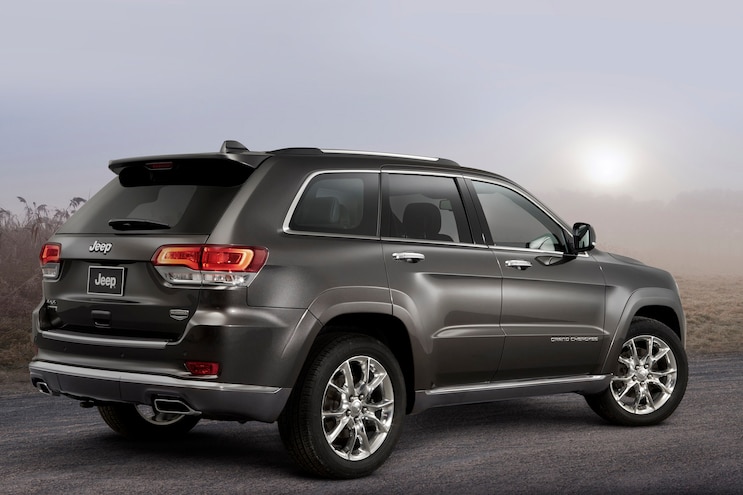 View Photo Gallery | 12 Photos
Photo 2/12   |   Jeep Grand Cherokee Rear Three Quarters
Standard equipment includes dual-zone air conditioning, satellite radio, power-adjustable driver seat, and 17-inch alloy wheels. And because it’s a Jeep, the all-wheel-drive hardware that’s available is comprehensive and exceptionally capable. A powered tailgate and a dual-pane panoramic sunroof are optional.
The Grand Cherokee’s off-road talents can be enhanced by an air suspension that raises the ride height and ground clearance by up to 4.2 inches. Little wonder, then, that the Grand Cherokee has received a whole trophy case full of awards, including Best Buy, Truck of the Year, Four Wheeler of the Year, and Safest SUV by various publications, plus the accolade of Top Safety Pick from the Insurance Institute of Highway Safety (IIHS). 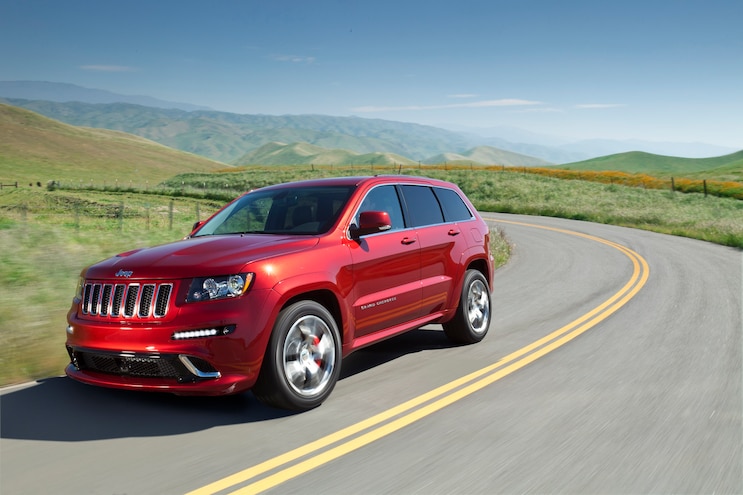 View Photo Gallery | 12 Photos
Photo 3/12   |   Jeep Grand Cherokee Action
Old ways die hard, so Jeep still offers a 5.7L Hemi V-8 engine making 360 hp and 390 lb-ft of torque. A rear-drive Grand Cherokee with this engine has a tow rating of 7,400 pounds. And it has a cylinder deactivation feature to help save a little fuel.
The standard engine, however, is perfectly good for most circumstances. It’s a 3.6L V-6 that was completely new in the ’11 Grand Cherokee. Often referred to as Pentastar, this unit develops 290 hp and 260 lb-ft of torque and can tow 5,000 pounds. Maximum cargo space is 68.7 cubic feet, or 35.1 when the rear seats are in place. 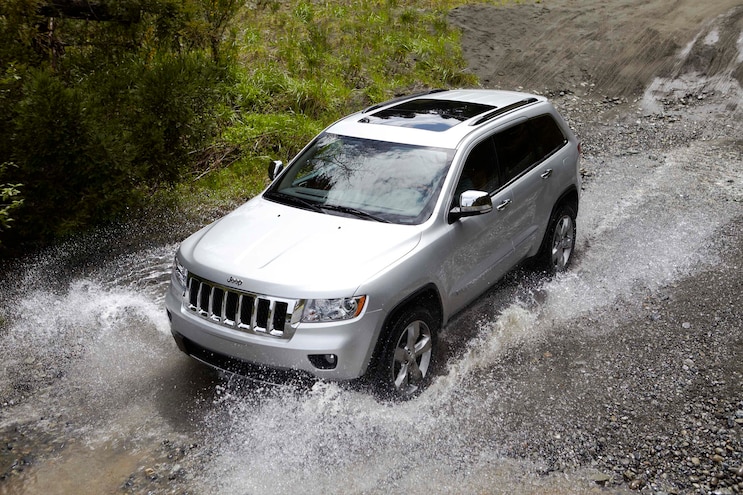 View Photo Gallery | 12 Photos
Photo 4/12   |   Jeep Grand Cherokee Fording
The all-wheel-drive systems might need some clarification. There’s Quadra-Trac I, which is the simplest and lightest setup, and works automatically. No levers or buttons are involved. Quadra-Trac II features a two-speed transfer case that employs a network of sensors to detect the axle with the most traction and then send up to 100 percent of available torque in that direction. Quadra-Drive II has a rear electronic limited-slip differential for rapid and smooth reactions to any wheelspin.
Selec-Terrain is also in the picture, which is a terrain-response system with settings for Sand/Mud, Snow, Rock, Sport, and Auto. It pairs with the two most sophisticated all-wheel-drive setups. The air suspension, by the way, is called Quadra-Lift.
At launch, trim levels were Laredo, Limited, Overland, and Overland Summit. Things like a rearview camera, leather upholstery, and Bluetooth are options in the Laredo, but standard in the Limited. Then things like a heated steering wheel with powered adjustment, powered tailgate, navigation, 20-inch alloy wheels and ventilated front seats are optional in the Limited, but standard in the well-equipped Overland. The top two trims are eligible for all-wheel-drive packages that also include skidplates, all-terrain tires, hill-descent control, and tow hooks. 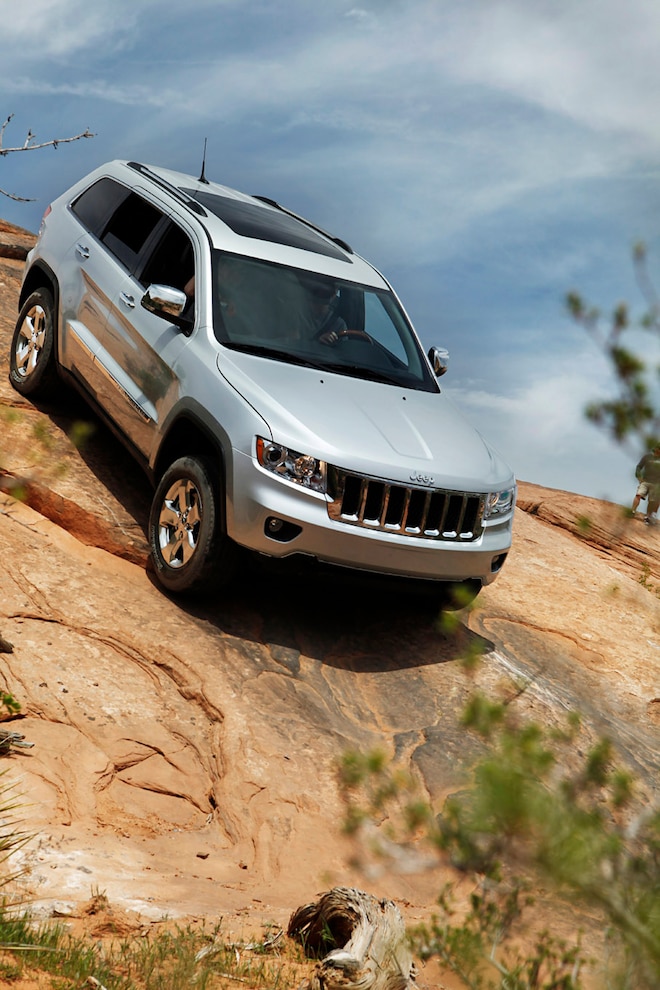 View Photo Gallery | 12 Photos
Photo 5/12   |   Jeep Grand Cherokee Hill Descent
The first revamp happened in ’14, resulting in subtle tweaks to the front and rear styling, an eight-speed automatic transmission replaced the five-speed unit, and a 3.0L V-6 diesel engine—with 420 lb-ft of torque and the same towing capability as the gasoline V-8—made its debut. The cabin also received a spruce-up (a 7-inch infotainment screen became standard on the lowest trim, while the rest gained an 8.4-inch touchscreen), while more technology like internet radio came on board. Oh, and the Overland Summit name was shortened to Summit.
For the ’16 version, curb weight was reduced by deploying some aluminum suspension components. This year, the Jeep also moved over to electrical power-steering assistance, added a gearshift lever that just requires nudges instead of physically moving it to another section of the shift gate, brought variable-valve timing to the gasoline V-6 (resulting in 295 hp), and fit an automatic stop/start function to save fuel when idling. Overland trim became eligible for a new High Altitude option package that includes cosmetic changes, some advanced safety features, and a sportier suspension setup.
Taking a hypothetical example in Limited trim, with all-wheel drive and the 3.6L gasoline V-6, with 77,500 miles, silver paintwork, in good condition and bought from a private party, we’re looking at a value of $17,096. Compare that with a similar Ford Explorer XLT, which is blue-booked at $15,851, or $17,523 for a Honda Pilot EX-L.
Naturally, we recommend an inspection by an independent expert, only considering those vehicles for sale that come with a complete maintenance history, stretching the budget to afford a younger example, and applying as much common sense as possible. 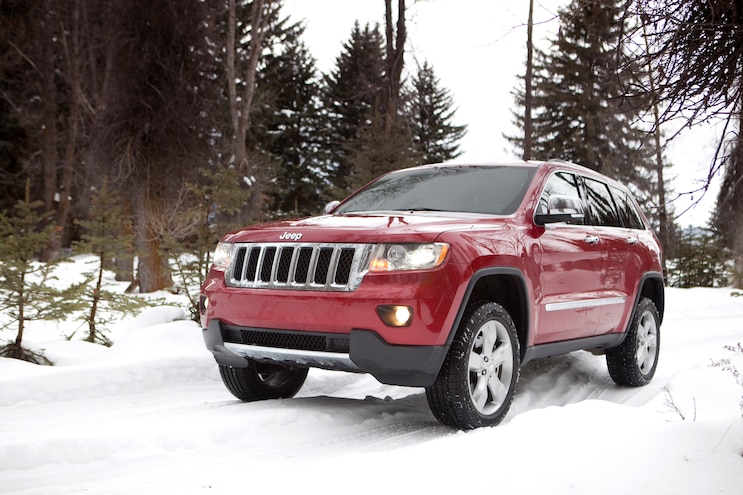