A Truck-and-Trailer Combo Fit for the Show Scene 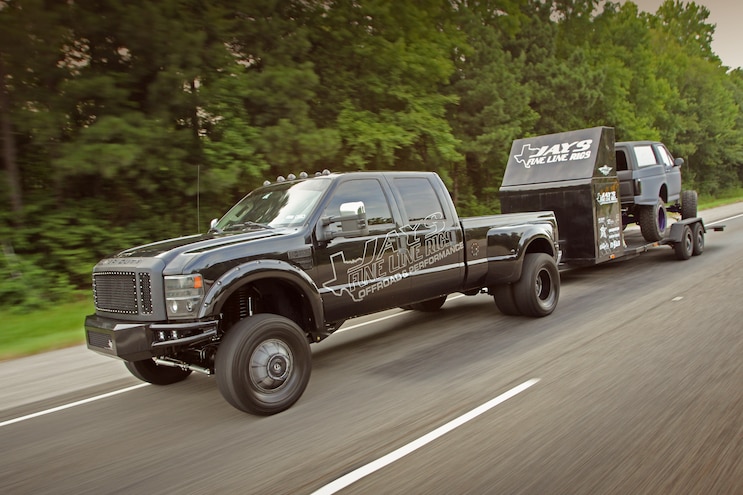 Jays Fine Line Rigs (JFLR) is an off-road and performance shop located in Flint, Texas. Owned and operated by Jason Naron and Mike Naron, this small family-owned business has set high standards in providing quality services and accessories to the East Texas area. With the motto of “Creating More Explicit Ways to Show Off Your Ride," JFLR sells and services the best parts the automotive industry has to offer, with the highest standard of attention to detail in custom-built trucks. JFLR has been in business since 2012, with the reputation of building some high-end, show-quality trucks that have a well-known reputation in the truck scene, with multiple trucks displayed on the Grand Stage in Vegas for the SEMA Show. Jason believes that every truck has a story and wants to help customers achieve the desired look they envision for their builds. JFLR staffed some of the best guys in the area that shared the same passion Jason and Mike brought to the business.
As the business continued to grow, Jason deemed it prudent to turn his 2008 Ford F-350 dualie into the company shop truck and tow rig to maximize the look of his truck while having it serve as an eye-catching rolling billboard around town and in other parts of the country. Jason sat down with his team and discussed what future plans he had for the truck and how he wanted to execute a new build with all hands on deck. 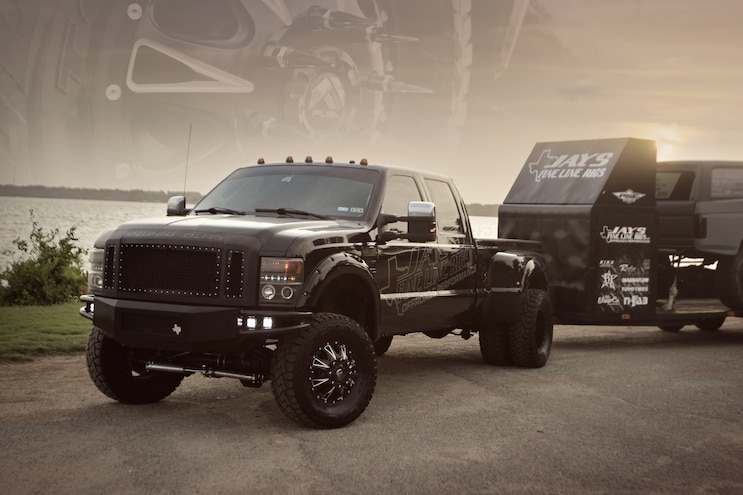 View Photo Gallery | 15 Photos
Photo 2/15   |   2008 Ford F350 Strictly Business JFLR 008
The team at JFLR quickly tackled tearing into the truck, removing the factory suspension, and getting the undercarriage cleaned up and coated with a satin black finish to give it the showroom-quality look desired before installing a new lift kit. Jason decided to go with a purpose-built system that would increase the control and off-road capability of the heavy-duty truck. Carli Suspensions’ 4.5-inch kit is a tuned suspension for the unpredictable; this level of suspension system far surpasses the expected capability of an 8,500-pound truck while providing the best street ride. The 4.5-inch lift included coil springs, radius arm drop brackets, 1-degree caster correction shims, extended stainless steel brake lines, an adjustable track bar, sway bar drops, heimed end links, and full progressive leaf springs. Additionally, the team added dual steering stabilizers, a Carli differential guard, and matching Bilstein 5100 shocks out back.
The shop truck needed to roll on a reliable wheel and tire package that looked proper, so a set of 17-inch Fuel Off-Road Throttle wheels were ordered and wrapped in 35x12.50R17 Toyo R/T tires. The wheels were bolted to the behemoth via a set of 4-inch chrome V&V Concepts spiked lug nuts to complete the suspension setup. 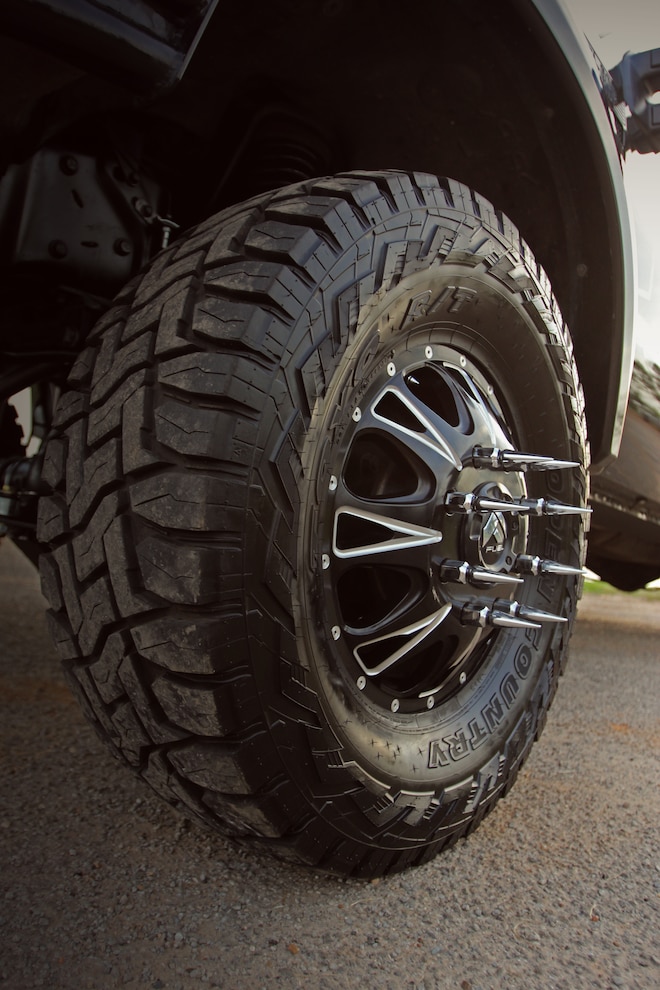 View Photo Gallery | 15 Photos
Photo 3/15   |   2008 Ford F350 Strictly Business JFLR 002
At Jays Fine Line Rigs, truck accessories are the main line of work sold over the counter, so Jason sat down with his sales team to order up a full line of accessories to outfit the rig in style. The factory exterior lights were replaced with a full line of smoked LEDs from Recon, including smoked projector headlights, taillights, cab lights, side markers, third brake light, and dualie fender lights. Amp Research retractable side steps made it easier to get into the big rig, and a custom steel bumper outfitted with Rigid Industries LEDs complemented the front Royalty Core mesh grille insert and side badges. The guys added on the exterior finishing touches with Bushwacker pocket-style fender flares up front, a B&W Trailer Hitches turnover gooseneck hitch and Tow & Stow receiver hitch, and a custom set of mudflaps with JFLR badges—as well as a new Mag-Hytec rear differential cover.
The big rig wasn't quite ready to make cross-country trips, so Jason put in a phone call to his good friend Dorian Reyna from PSE Houston (Power Stroke Enginuities) to assist in getting the rig set up with the proper performance mods needed to pull a heavy load. Dorian and his team executed the plan, with precision diesel performance modifications allowing the truck to tow any setup Jason encountered. The performance mods included a custom-tuned H&S Performance Mini Maxx tuner, a Flo-Pro 4-inch exhaust system, and a killer S&B Filters cold-air intake. 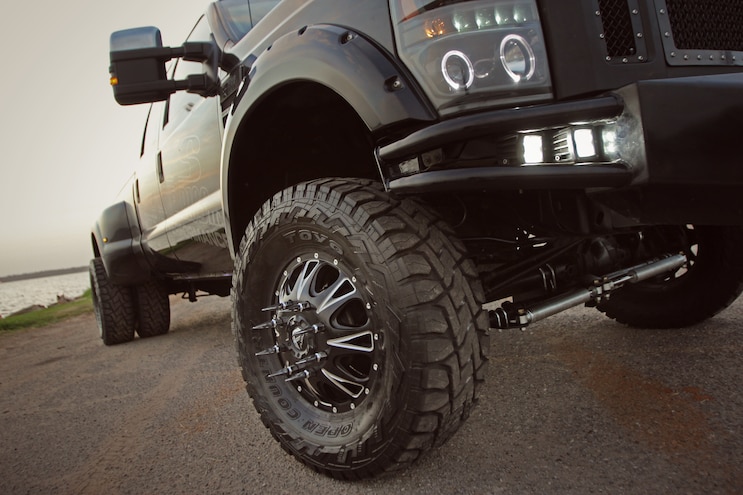 View Photo Gallery | 15 Photos
Photo 4/15   |   2008 Ford F350 Strictly Business JFLR 001
Now that the rig was ready to haul trucks across the country to car shows, Jason wanted to make sure the road trips were comfortable for him and his team, starting with the factory sound system. Jason reached out to his local car audio rep, James Halter, who got the truck set up with some new equipment: Alpine door speakers and tweeters, a Pioneer 7500 double-DIN receiver with GPS, a custom subwoofer enclosure featuring a single 10-inch sub behind the seat, and two Optima YellowTop batteries.
The JFLR team removed the factory woodgrain trim inside the cab to color-match them to the factory exterior gloss black, complementing the Lariat interior nicely. The crew wrapped up the build and put meaning to the truck’s name, "STRICTLY BUSINESS," as the company logo got placed on each side of the truck, making sure everyone knew what shop built the rig. 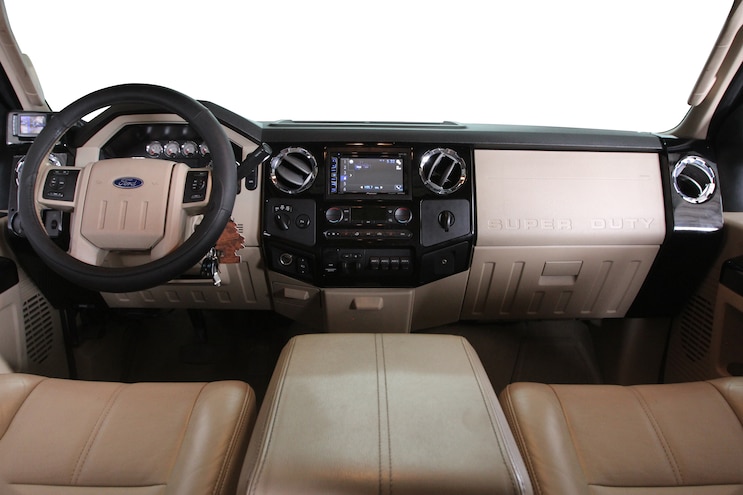 View Photo Gallery | 15 Photos
Photo 5/15   |   2008 Ford F350 Strictly Business JFLR 015
The team settled down after the truck was completed to get ready for the second stage of the build, which was tackling the custom car hauler that would sync the builds together. The 30-foot custom car hauler received a set of matching Fuel Off-Road wheels wrapped in Toyo tires. A custom set of drive-over ramps was fabricated at JFLR, along with a custom wrap on the front box displaying JFLR sponsors. Having the combo setup for Jays Fine Line Rigs is what Jason calls “the ultimate goal" to transport both parts and trucks wherever desired—with plenty of room in the truck and on the trailer.
Jason would like to thank all the sponsors who have supported the growth of the company, allowing JFLR to build trucks with the best products on the market. A special thanks goes to Jason’s wife, Hali Naron, for all her support with managing the business and also his father, Mike Naron, for believing in Jason’s vision for the company and for being very supportive in all the decisions to keep the business on the right track. Jason would like to thank his team for all their hard work and late hours devoted to the shop to ensure quality work and outstanding truck builds: James Austin, Darl Whiteaker, David Reese, Josh Franklin, and Keelan Steinhauser. 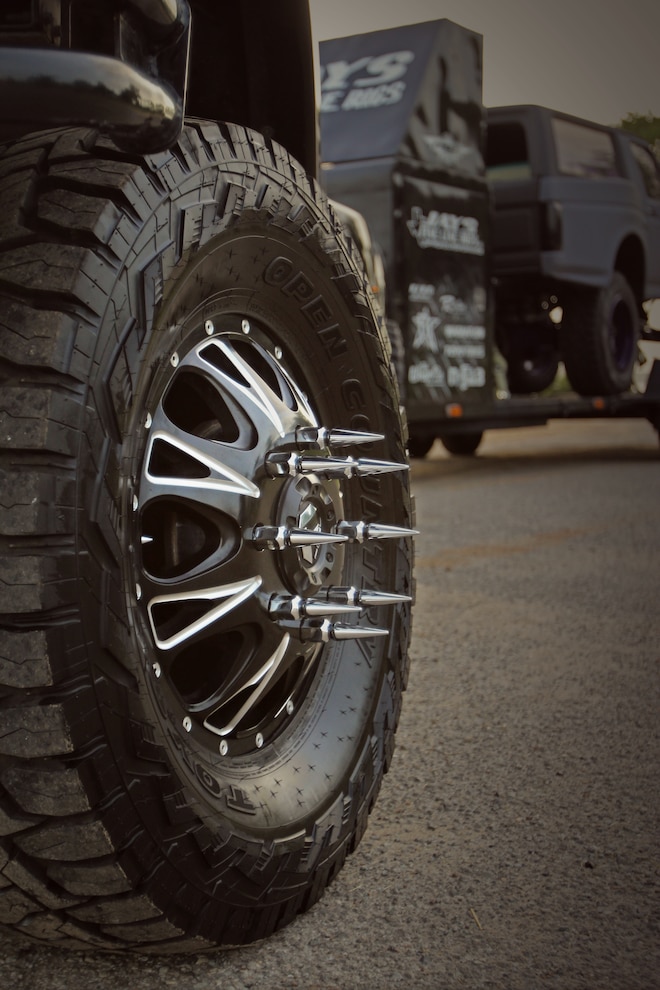 - OF
By Koapono Patrick
8 Articles