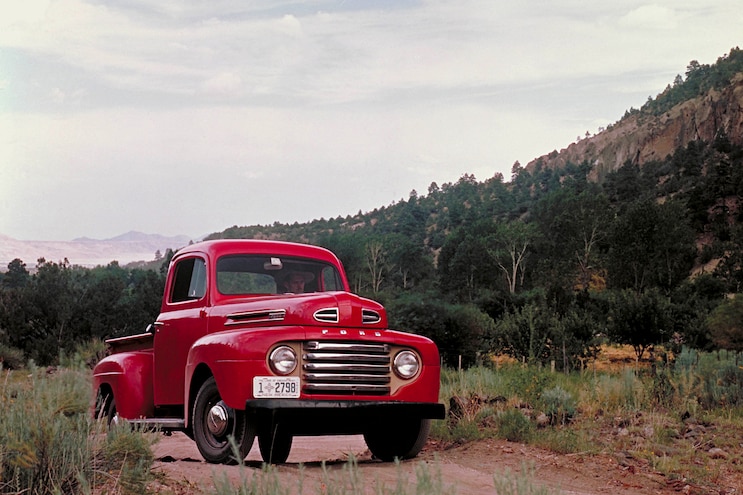 Since our look back at Chevrolet’s significant trucks over a century, we’re giving equal time to Ford fans. And as truck fans like an argument, we won’t even say how many years Ford has been building trucks, so you’ll have to decide for yourself: Was it from 1905 and the Ford Deliver Car built on the Model C, the 1907 Delivery Van on the Model N chassis, the 1917 Model TT chassis cab (a Model T cab and engine on a heavier frame), or the 1925 Model T pickup?
Ford cites it as the 1917 TT. The same release also says that by 1977, the F-150 had been introduced “to combat the C/K trucks from General Motors” and has “pulled ahead in the sales race,” but in 2015 General Motors sold 40,000 more fullsize pickups than Ford—according to sources, combined Silverado and Sierra sales were 824,683 units, while Ford sold 780,354 F-Series.
This list is not conclusive—just the Ford trucks we find noteworthy for one reason or another—so feel free to add, delete, and disagree. 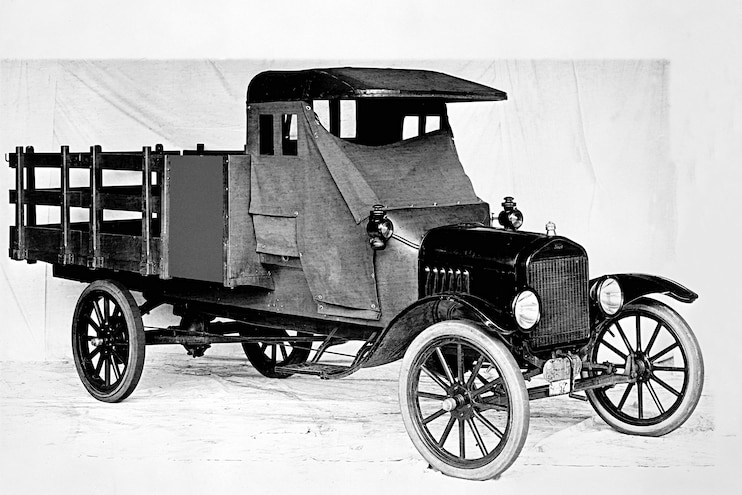 What amounts to a chassis-cab HD today, the TT was based on the Model T cab and engine, mounted to a heavier frame rated at one short ton capacity. A three-speed transmission meant two forward and one backward, and the torque tube went to a worm drive rear end running solid rubber tires. Power came from a 177ci (2.9L) four of 20 horses, but it weighed less than half what a new one does, so it would still manage 40 mph.

While the ’25 Model T pickup was essentially a Model T runabout with a pickup bed on the back, the ’29 Model A pickup was the first designed as a truck. With a 201ci (3.3L) flathead four, its 40 hp and 128 lb-ft of torque was twice that of the Model T, and some claim 65 mph was possible. It also had brakes on all four wheels, fuel tank between dash and engine, and its hand-shifted three-speed transmission was far easier to drive than the T’s pedal-shift arrangement. Although it didn’t have the TT's solid rear tires, it still rode like a truck empty. 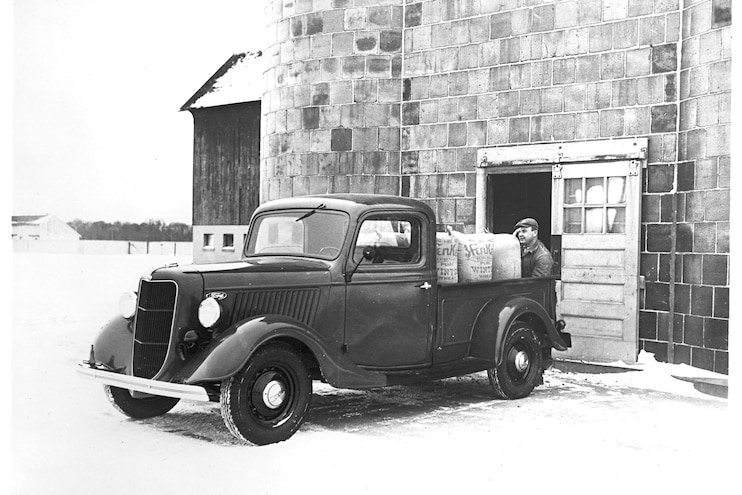 Alongside evolutionary improvements, sleeker bodywork, longer bed, and better weight distribution, the Model 50 brought the flathead V-8 to pickups. Three years old by then, the 221ci (3.6L) V-8’s compression ratio had been bumped up and it made 85 hp and 144 lb-ft of torque. It was inexpensive and not highly efficient, but it was offered in U.S. Fords for 21 years. Unlike most modern engines, the iron-head versions rated more power than the aluminum-head versions, all other things equal.

Following war production experience with heavier trucks and four-wheel drive, Ford introduced the first F-truck for ’48. The Bonus Built Line covered 1/2-ton F-1 through 3-ton F-8, had a five-bar grille, and 1/2-tons came with a 226ci, 95hp flathead six or a 13-cubic-inch-larger flathead V-8 of 100 hp, either mated to a three- or four-speed gearbox. New features included a passenger-side wiper and taillight and optional four-wheel drive from Marmom-Herrington. 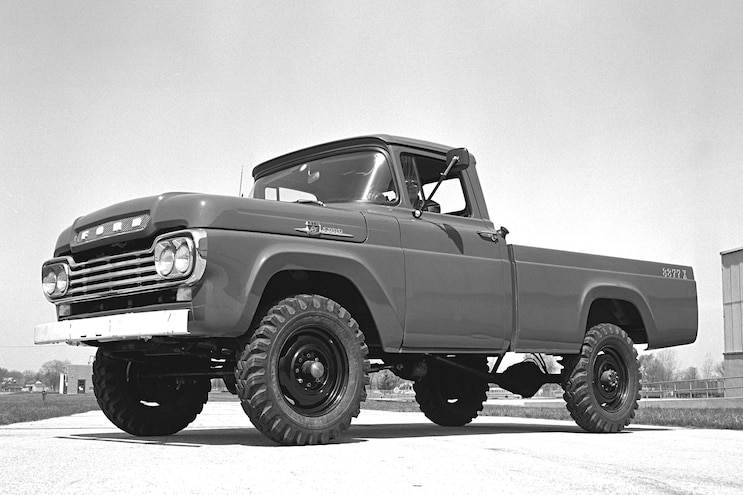 Although the model debuted in ’57 with new Flareside and Styleside box choices and the ’58 got four headlights, ’59 stands out as the first year—and the first of the Big Three—that Ford offered four-wheel drive from the factory production line instead of relying on Marmon or Napco conversions. This truck began the shift to slab-side 8-foot beds that would prove the most popular configuration for 40 years.

While not on Ford’s “century of truck leadership” poster and built on a car chassis (ladder frame, leaf springs, sound familiar?), the Ranchero was typically sold as a Ford truck, and payload matched or bettered a 1/2-ton F-Series. It also beat Chevy’s El Camino to market by two years and the badge was derived from a longhorn. With I-6, Y-block V-8, or 352-inch FE V-8, it lasted three years before being downsized to the Falcon Ranchero in ’60.

The big E-van was the first body-on-frame design, so it was available for carrying cargo, passengers or as a cutaway to add a specific body. Available in two wheelbases and three lengths, it was redesigned in ’92 (essentially the same wheelbase but longer) and ran until ’14 in van form—it’s still being built in cutaway applications. It’s been suggested that with all the shuttles, ambulances, and buses, more people have ridden in an E-Series than an F-Series.

This marked the first new frame since ’65, and one that was heavily revised in just two years, but the design introduced “twin-traction beam,” the first independent front suspension on a volume-production four-wheel drive (Jeep had it briefly in the ’60s). This era marked the start of choice, with more than 150 options and up to seven trim levels on tap, and the Blue Oval badge still in use. The F-100 got two unique engines—a 232-inch V-6 and 255-inch V-8—and each lasted only a year, then in ’84 Ford quietly dropped the F-100 because its 5,150-pound GVWR meant a stricter emissions class. This generation also got an LPG-prep option for the 300-inch (4.9L) six, in ’83 the 460 replaced the 400 and the 6.9 diesel was offered, the 302 got fuel injection, and the F-350 crew received a dually option. By 1985, the three-on-the-tree shifter was gone.

No longer content to sell a rebaged, lightly restyled Mazda as the Courier, Ford applied the Ranger name to its new compact pickup—and 11 years later began building the Mazda B-series based on the Ranger. Although the Ranger grew slightly over its nearly 30-year run, which included 17 straight years atop the entry-truck sales charts, it remained a compact, with a variety of four- and six-cylinder engines putting out between 72-207 horses, plus one limited-production electric model.

Ford was first in fullsize with flush headlamps—cheaper if the bulb burned out, much more if the lens got broken—the first with antilock rear brakes, and the first with port fuel injection. Ford used this generation to debut the F Super Duty cab/chassis, as well as a completely new interior. The Flareside disappeared until the ’92 redesign.

Looking to improve on the Bronco II—using four doors like an XJ Cherokee and built with families in mind—Ford launched the Explorer. We were there when competitor representatives got a good close-up look, followed by expletives related to their impending plight. In its first full year of production, Explorer sold more units than any XJ, S-10 Blazer, or Grand Cherokee ever has, hitting a maximum of 445,000 in 2000 midway through the second generation. It kept the truck-type chassis—albeit with independent rear suspension added in 2002—until in ’11 it morphed into a crossover based on a revised Ford and Volvo car platform. 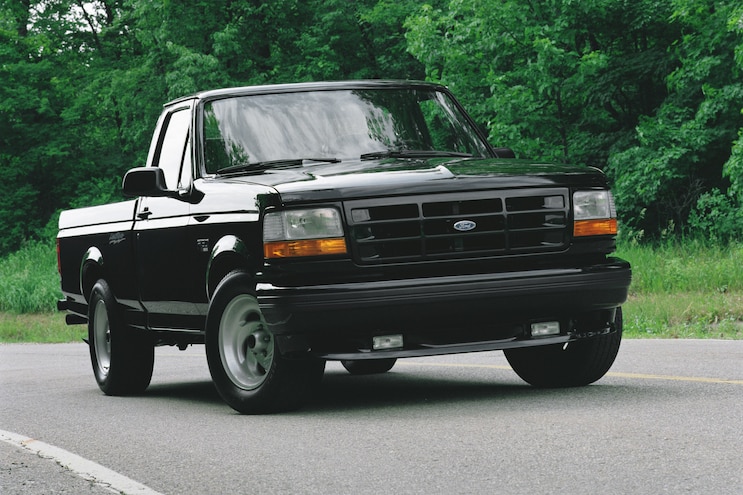 The biggest changes to the next-generation F-Series were cosmetic, and this was the last “classic”-style F with vent windows and rain gutters. But the biggest news was the ’93 Lightning, Ford’s answer to Chevy’s 454SS and to a lesser extent GMC’s Syclone. With lowered suspension, 17-inch wheels, unique cosmetics and seats, and cylinder heads from a Cobra Mustang, the 351 made 240 hp and 340 lb-ft and, despite the fewer cubes and pound-feet, the Lightning ran the strip with the 454SS and handled even better. It didn’t launch as hard as the all-wheel-drive Syclone, but it was a more well-rounded truck than either of the GM sport trucks, retaining a fair amount of payload and towing capacity.

The first HD pickup line to be completely differentiated from the 1/2-ton, the Super Duty had a unique chassis and bodywork (except for taillights), and it set new standards in big. It was powered initially by the 5.4L V-8; 275hp 6.8L V-10; or a 235hp, 500–lb-ft, PowerStroke diesel. Three-valve heads on the gas engines bumped power in ’05 while the ’03 PowerStroke was downsized to 6.0L, but power was up to 325 hp and 560 lb-ft. In our opinion, one of the best things about the Super Duty pickup was it also brought us the Excursion, Ford’s 60-years-later answer to the Suburban.

The ’97 F-150 led to the first Expedition, but in ’03 it became the first fullsize, high-volume, three-row utility to get independent rear suspension (Mitsubishi’s three-row Montero had it earlier, the Sequoia not until ’08). Although hard-core skeptics were plentiful, this Expedition had a hydroformed fully boxed frame, better ground clearance, better brakes and steering, automatic rear leveling, and a higher tow rating of 8,900 pounds. It got the King Ranch version in ’05.

The second-generation Super Duty brought a new 6.4L diesel (350 hp/650 lb-ft), tailgate step, and a regular production pickup version of the F-450. It was diesel-only, six-speed manual or five-speed automatic, and standards included integrated trailer brake controller and tow package (duh), 4.30:1 or 4.88:1 gears, and 19.5-inch forged-aluminum 10-bolt wheels. As a result, it weighed more than 4 tons, had a maximum tow rating of 24,500 pounds (GCWR 33,000), and was electronically limited to 81 mph.

The ’09 model got an evolutionary styling upgrade and larger cabin, and it was the first F-Series without a six-cylinder engine choice. Also new was the Raptor, a four-wheel-drive equivalent of a Lightning with long-travel suspension, big tires, bodywork so wide it required clearance lamps, and a 5.4L standard with a 411hp 6.2L option. In ’11 the engine lineup was completely revamped, the 4.6L and 5.4L engines giving way to a DOHC 3.7L V-6, 5.0L V-8, and twin-turbo 3.5L V-6.

Leveraging experience gained from 1993 car experiments and Jaguar Land Rover ownership, Ford developed the aluminum–alloy bodied F-150, losing significant weight in the process. If nowhere else, the debate continues in advertisements on the intelligence of this move, but the ’15 F-150 was a major improvement. The F-150 also pulled active safety equipment from the car market, will steer a trailer backward for you, and brought the second Raptor.