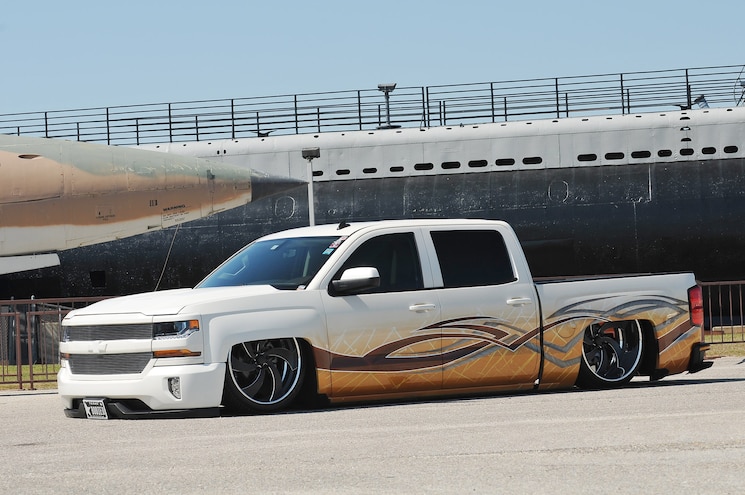 When the boys get together with a couple of cold ones, the conversation can go anywhere and everywhere. One late night, Evan P. and his close friends were talking about customizing trucks. Evan was in the process of having a body-dropped Tahoe completed, and his wife, Amanda, had just purchased a ’14 Chevy Silverado 1500. Until then, she had a small import, which was starting to get cramped considering the couple has three kids. So Amanda made the decision to buy the new Chevy truck. Frustrated with how long the build was taking with his Tahoe, Evan said to his friends, “I should just take my wife’s truck and build that.” His friends laughed and said it would never get done. 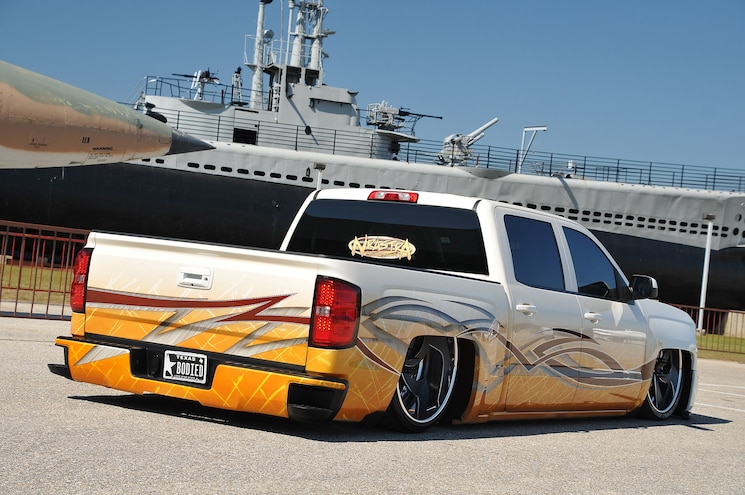 View Photo Gallery | 15 Photos
Photo 2/15   |   2014 Chevy Silverado 1500 Hurt Feelings Rear
As one of those guys who can never be told he can’t do something, Evan brought Amanda back to the dealership and picked out a new SUV for her—and he took possession of her Chevy. The search for a reputable shop to handle his ideas proved to be easier than he thought. He talked to Adrian (Tiny) Galindo of Finesse Concepts in Houston who understood what Evan had planned and took on the job.
The full teardown was started and the powertrain was pulled to begin the body drop. A full Accuair air-ride system, complete with Dominator bags, was added to bring the truck lower. Evan wanted to give the Chevy a minor face-lift by adding a 2017 front end along with a T-Rex grille. With the suspension and body done, he brought the Silverado to Alan at Chino’s Custom Interior who chopped the stock seats and wrapped them in leather and added a suede headliner. 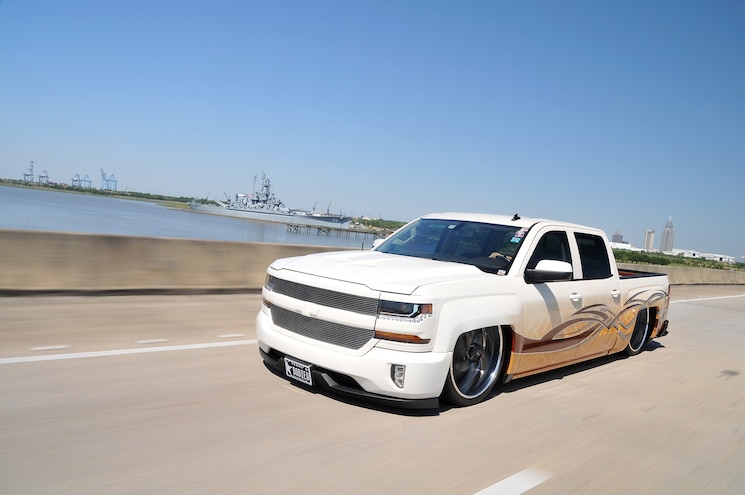 View Photo Gallery | 15 Photos
Photo 3/15   |   2014 Chevy Silverado 1500 Hurt Feelings Drive
The Chevy was white from the factory, but Evan wasn’t satisfied with keeping the exterior stock. He asked Jose Mendoza from Pistolero Designs to add his custom touch to the truck. Jose took full control and mixed House of Kolor Platinum Ice Pearl, Cocoa Pearl, Galaxy Gray, and Sunset Kandy along with some silver leaf and variegated gold leaf to stand out. Jose turned his spray gun on the interior, making sure every plastic piece matched the exterior and the engine pieces.
When it came time to add the music portion to the Silverado, Evan took on that task himself. He added an iPad unit to the dashboard and replaced the stock door speakers with JL Audio components. Evan designed and built a custom subwoofer box that fit perfectly under the rear seats to hold two JL Audio subwoofers and preserve the space for the kids in the backseat. To make sure the Chevy maintained a solid driving experience, a custom intake was added by Tiny, and a full exhaust system was installed by Aces Performance Exhaust in Houston. The final touch was having the Silverado tuned and ready for the road. 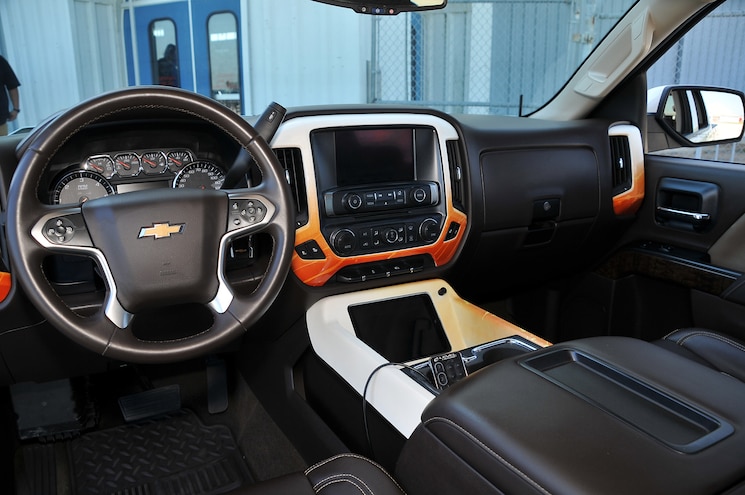 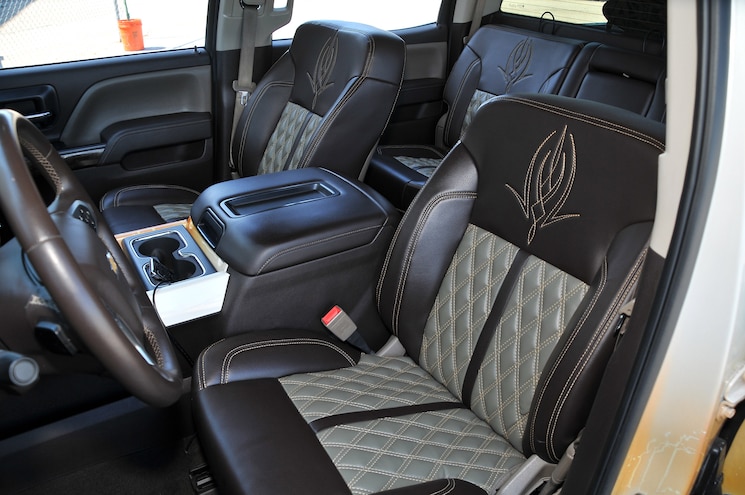 View Photo Gallery | 15 Photos
Photo 5/15   |   2014 Chevy Silverado 1500 Hurt Feelings Interior Seats
While in most cases you shouldn’t take your wife’s vehicle and start cutting it open, Evan and Amanda share an understanding of the Truckin lifestyle. And as proud members of Nrastra – One Low Family, they are very pleased with the way their vision came to fruition. Their three children, Brandon, Elissa, and Bo are now also reaping the benefits of the seemingly impossible build that resulted from a little late-night conversation and some liquid courage. 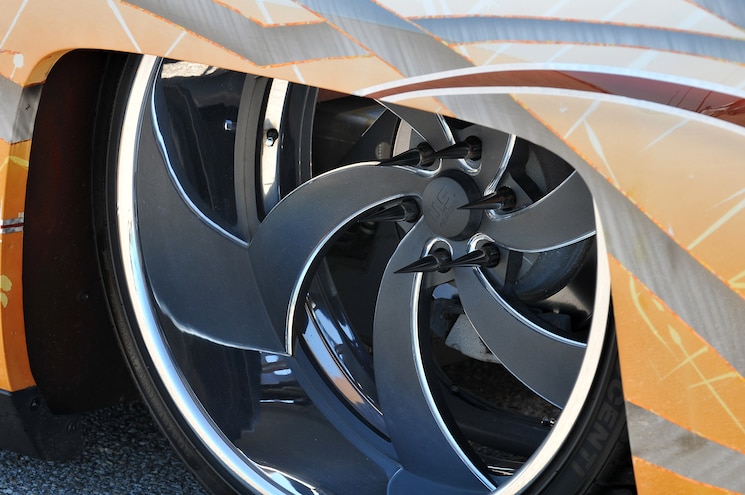