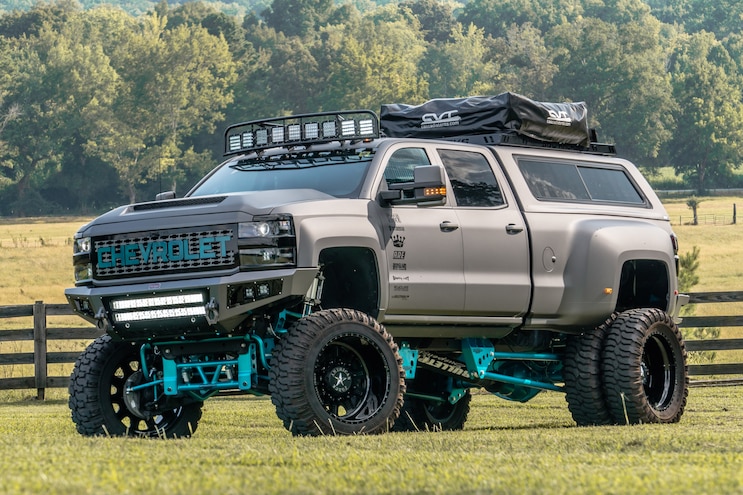 Throughout the years, Truckin has featured many builds that run the gamut from form to function. Some are built for pure wow factor, designed to be showstoppers in the truest sense of the word. Others are purpose-built without the owner ever considering the quality of the build might be something we would want on our pages. Somehow, this truck manages to represent both sides. One quick glance at this ’16 Chevy 3500 alerts you to its high-end modifications. Cris Payne, founder of Truck Guru, and his team are credited for this phenomenal build, which embodies all the alluring aspects and functionality of a top-notch truck. 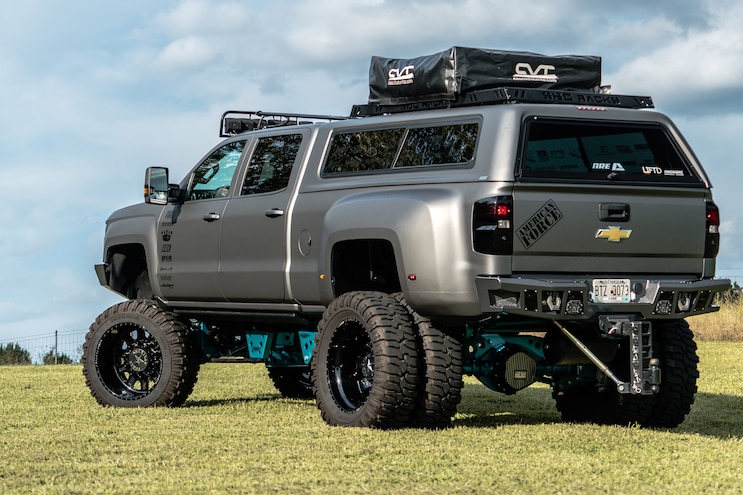 View Photo Gallery | 18 Photos
Photo 2/18   |   2016 Chevy 3500 Functional Beaut
Truck Guru is a company with a reputation for creating outstanding projects. The crew has partnered with many leading manufacturers in the industry and produced several quality builds that have been proudly displayed at SEMA and beyond. This truck is just the latest addition to their impressive stable of builds. Cris and his team designed this truck to be appealing and rugged enough to do the dirty work.
Up front resides Bulletproof Suspension’s 12-inch lift kit, complete with its dual-shock system with 2.0 reservoirs. For the rear, Cris relied on Bulletproof Suspension’s 12-inch cantilever kit, which permits more travel in addition to better overall ride quality. Cris told Truckin this beast rides as nice as a Caddy on the road and performs remarkably well off-road. Bringing this dualie to a stop are R1 Concepts’ brakes and rotors. Connecting to the pavement are black 24x14 American Force wheels on 40-inch Interco M-16 tires. The result is a truck that drives beautifully and does so looking very good. 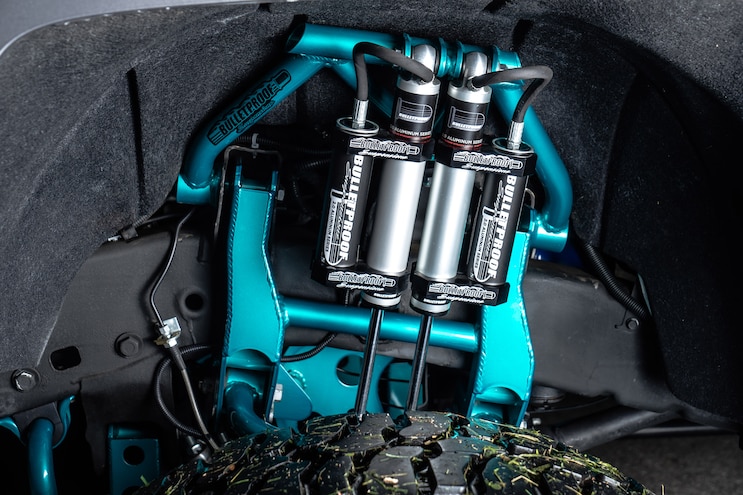 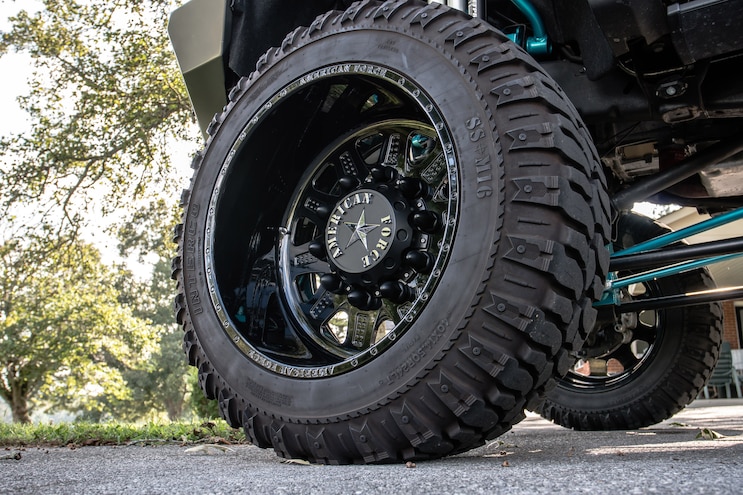 View Photo Gallery | 18 Photos
Photo 4/18   |   2016 Chevy 3500 Functional Beaut Wheel
The exterior of the Chevy exhibits more of the radical aspects of the build. To the naked eye, this truck would appear to be fully painted, but it actually has a combination of paint and vinyl wrap. Cris took the rig to Kern Body Works and spent the time necessary to get the paint to flawlessly match the Avery Dennison wrap. Then Daley Visual wrapped the designated parts in the truck. The cortez teal accents around the rig give it a nice touch that disallows a dull appearance. BodyGuard bumpers were installed, and, to increase functionality, Monster Hooks were added along with Offroad LED lights. Cris didn’t feel the lumen power up front was enough, so he reached out to Fifth Industries for a one-off light rack to holster OLB’s 5.5-inch cubes. With more than 112,000 lumen bursting from up front, we believe darkness will not be an issue at any time. It is all in the details, and Cris added plenty of them. He and his team at Truck Guru designed a grille that includes a large “Chevrolet” running across the Chevy Bow Tie mesh grille. The stock hood was swapped out with an aggressive RK Sport hood with a real scoop for air induction. Yes, you read correctly: The scoop is actually functional. The CVT tent sitting on top of the A.R.E. shell can be set up within minutes and easily sleeps two to three people. The truck is massive, so a CargoGlide in the bed allows for easy access to the seemingly impossible-to-reach cargo. The accessories on the truck make it a versatile and viable hauler—not just a showstopper. 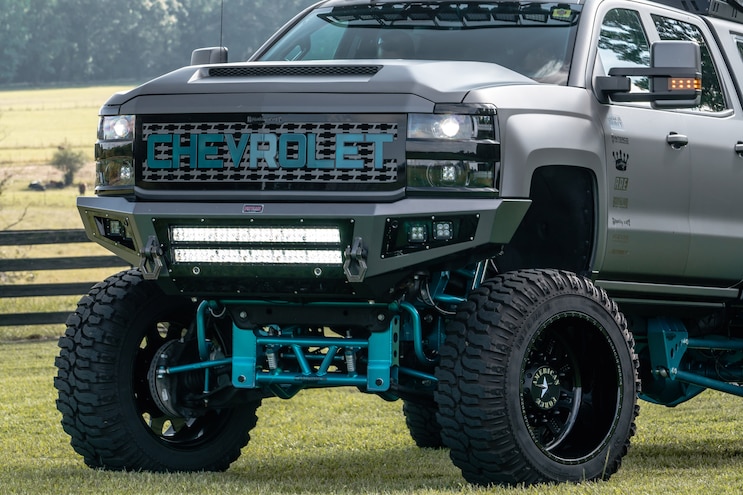 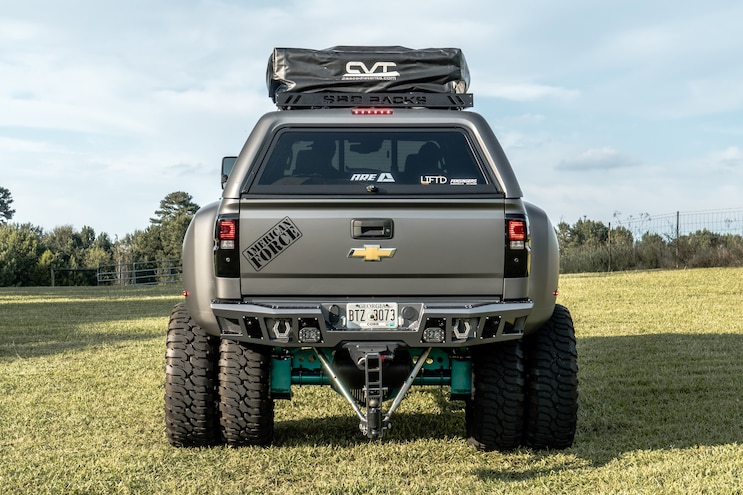 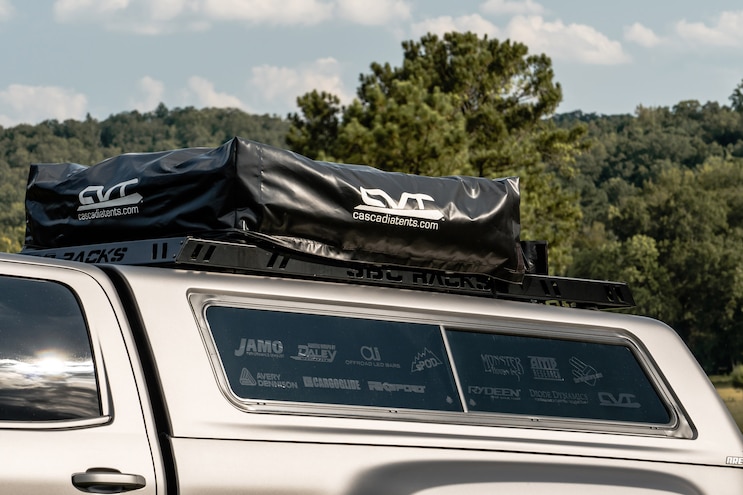 View Photo Gallery | 18 Photos
Photo 7/18   |   2016 Chevy 3500 Functional Beaut Shell Tent
Cris pulled every string to make the exterior of this monster extravagant, and he didn’t stop there. The interior has been improved in every aspect, and the proof Cris went the extra mile is evident. Roadwire and Mobile Audio Techs were entrusted to bedeck the cabin. Ostrich suede and leather materials make the interior look and feel as lavish as it can be. Four 8-inch Precision Power subwoofers and a Black Ice amplifier enclosed in custom cases tremendously augment the sound quality in the cabin. A touchscreen sPOD switch source unit was masterfully integrated into the headliner. Top-of-the-line tech along with plush materials make this an interior that follows the theme perfectly. 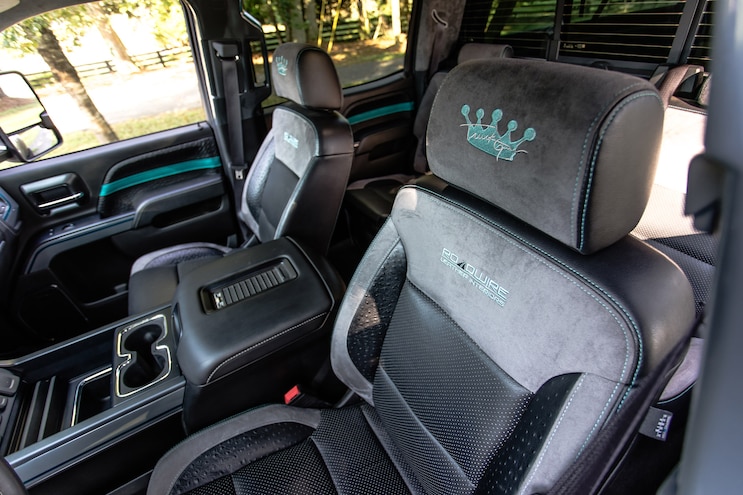 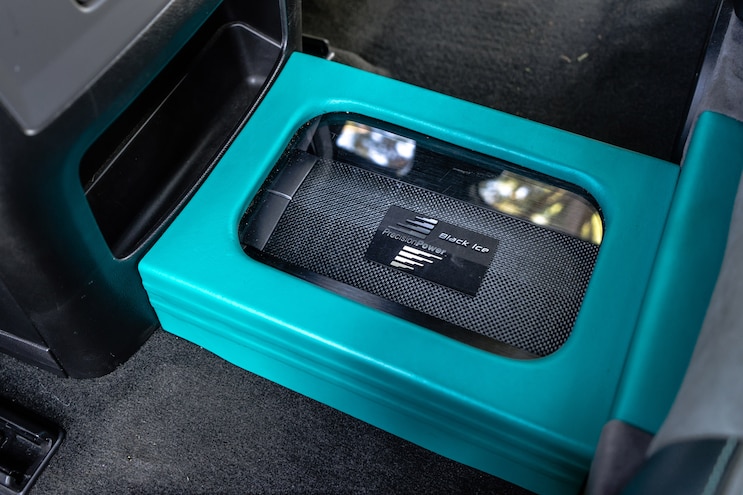 View Photo Gallery | 18 Photos
Photo 9/18   |   2016 Chevy 3500 Functional Beaut Black Ice Amp
Cris had a specific vision for this build, and we feel it was achieved to a degree you don’t often see. This is a great looking ride with the ability to work, play, and take home the trophy at shows.