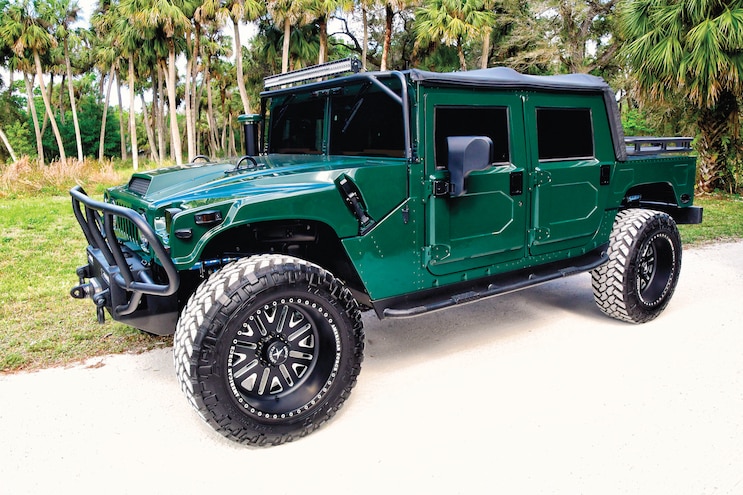 Few vehicles have intrigued automotive enthusiasts more than the legendary Hummer. Ultra-wide with aggressive lines from any angle, the truck’s battlefield heritage is immediately apparent. Originally created by AM General and later marketed by General Motors, the H1 is a civilianized version of the combat Humvee. Much of its bruiser profile is derived from the original MILSPEC requirement for a vehicle capable of following in the tracks and ruts of larger military equipment.
While the vehicles proved their worth in Operation Desert Storm and quickly became a favorite in the off-road community, the problems began when these supersized vehicles hit city streets. Their width makes them difficult to drive, hard to park, and a challenge to fit in the average garage. When oil prices rose, the combination of an underpowered engine and fuel mileage in the single digits contributed to the truck’s demise. Although GM shut down the plant in 2010, a huge number of enthusiasts around the world are still fascinated with this unique vehicle. 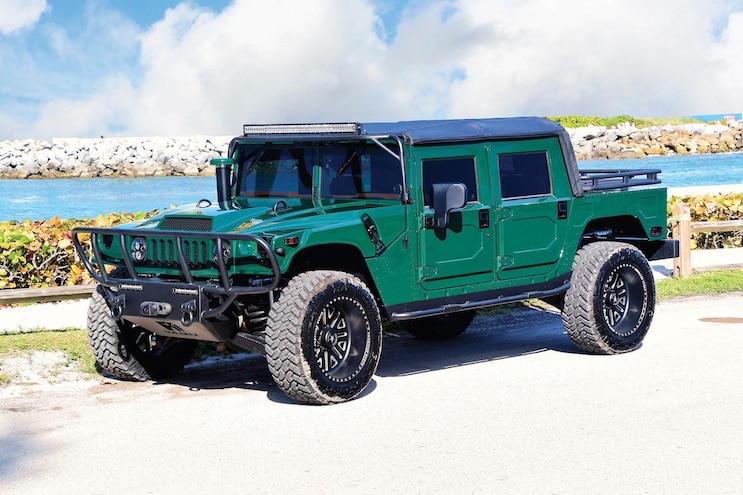 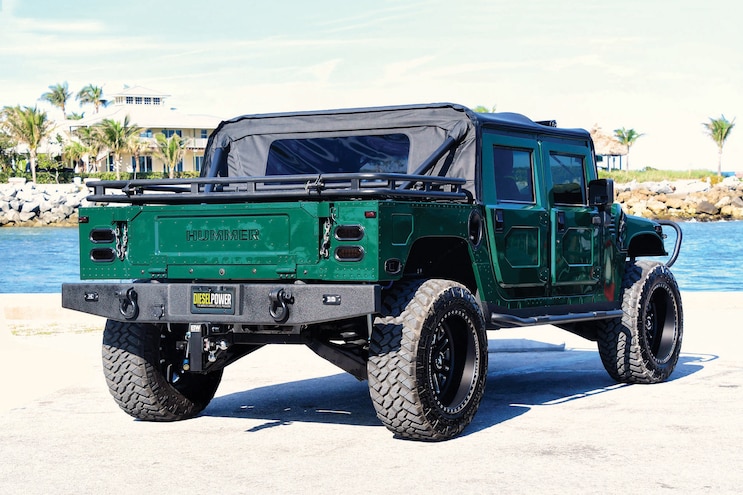 View Photo Gallery | 11 Photos
Photo 3/11   |   Fitted with a convertible top and custom bed with a Predator bed rack, this burly battlefield vehicle was never designed for a high-end paintjob. Countless hours of sanding and body prep result in a show-car finish.
Chas Bruck, a real estate developer in Tampa, Florida, is one of those fans, as well as an avid collector of supercars. He reasoned that a highly modified H1 would be the perfect addition to his collection. Through word of mouth, he learned few builders have more expertise with Hummers than Adam Pela from Xtreme Hummer Performance in Jupiter, Florida. The XHP team has worked with Duramax engines and ECM tuning since 2002 and Duramax-powered H1s since 2012, with dozens of magazine-quality rides to their credit. Adam and Chas sat down to review a long list of upgrades designed to transform the rough H1 into something perfectly at home in Chas’ supercar collection. The craftsmen involved in the yearlong effort created a level of performance and detail that elevates this vehicle to benchmark status in the Hummer community.
Modifications to Chas’ ’96 H1 started with the front and rear axles, which were upgraded with aluminum AMC 20 rearend housings fitted with Torsen differentials and 12,000-pound CV halfshafts. After a set of Xtreme Hummer Performance–fabricated shock mounts was added, all four corners were fitted with King Off-Road Racing Shocks remote-reservoir shocks. The custom-baffled aluminum fuel tank is protected with a steel skidplate, and an additional crossmember is welded to the chassis to increase torsional resistance. The truck rolls on 22x12 Special Forces rims from American Force, wrapped in 37x13.50R22 Toyo Open Country Mud Terrain tires. 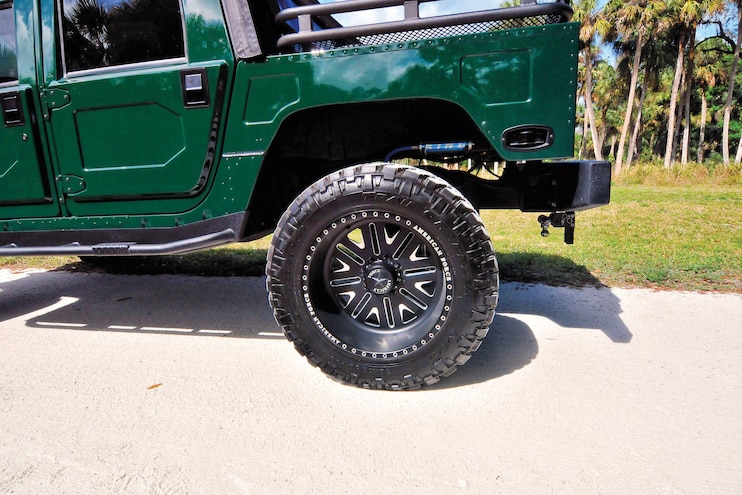 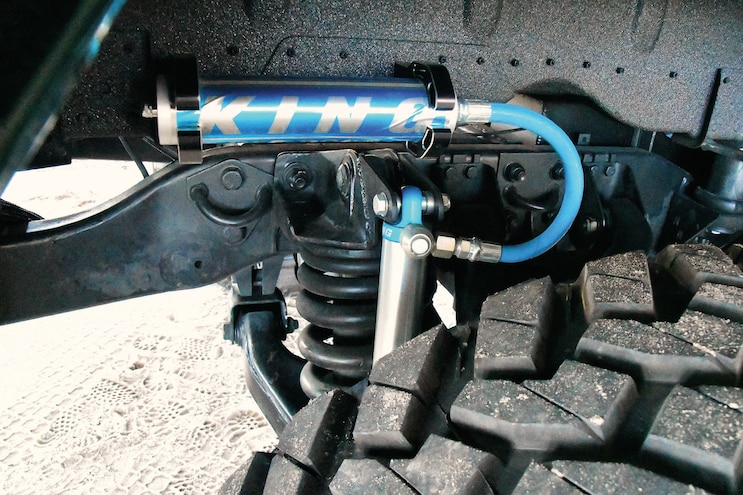 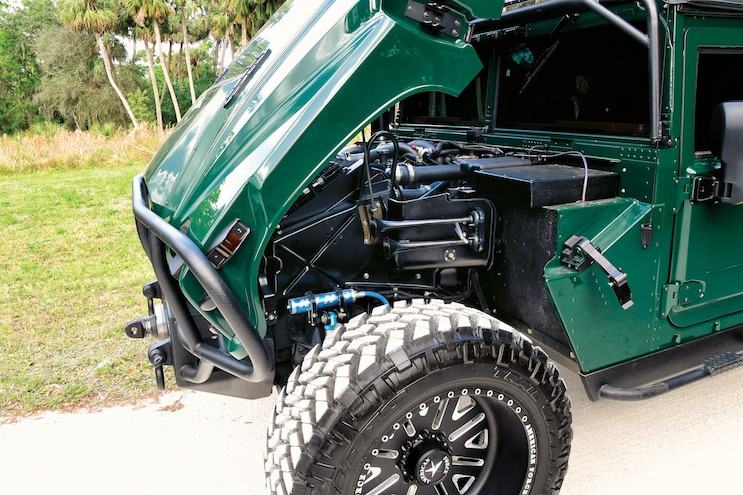 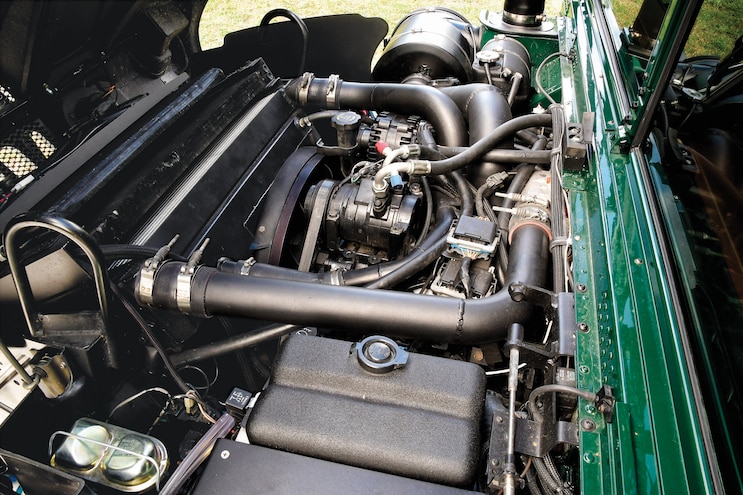 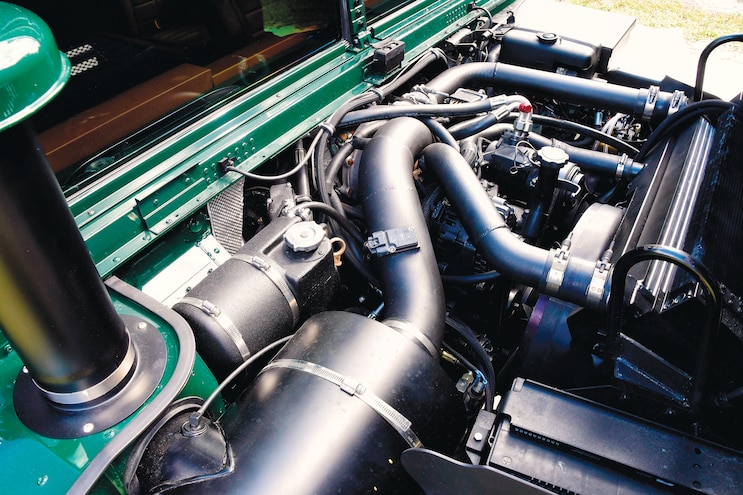 View Photo Gallery | 11 Photos
Photo 8/11   |   6.6L Duramax LBZ V-8 engine produces 525 hp.
To ensure the Hummer stands out from the crowd, XHP performed a series of external modifications that included adding LED headlights, taillights, a roof-mounted lightbar, and power/heated H1 mirrors, as well as an XHP-built front bumper and brushguard to hold a Warn Industries 16,000-pound winch. Since the truck is already a beast, the synthetic cable and Factor 55 Precision Engineering winch accessories will probably see more use helping others out of difficult situations! Moving to the rear, the bed side panels are fitted with additional aluminum bracing to add rigidity, and the inside is sprayed with U-POL Products’ Raptor spray-on lining. The Predator bed rack is a functional addition.
XHP collaborated with Street Metal Concepts in Sanford, Florida, on the exterior and interior. The shop’s sheetmetal and paint experts added a custom aluminum hood scoop and CNC-machined logos and then prepped the truck for paint. The H1’s aluminum body does not lend itself easily to high-end fit and finish, so extra effort is required at every level. In fact, each of the hundreds of rivets in the body were soda-blasted to ensure perfectly smooth panels, then the hood was reshaped with edge extensions using fiberglass resin to ensure tight cut lines. The steel doors were stripped to bare metal and worked over until they were better than new. Once the aluminum panels were media-blasted, the entire truck was sprayed with PPG epoxy paint, followed by catalyzed flexible seam sealer in order to create a surface usually found on high-priced exotics.
The final color is a custom mix of ’60s Jaguar British Racing Green and Brooklands Green with additional black toner, followed by multiple urethane clearcoats. The SMC team then moved inside, scrapping most of the original interior and employing CAD modeling techniques along with CNC lasers to create the elegant cabin appointments. 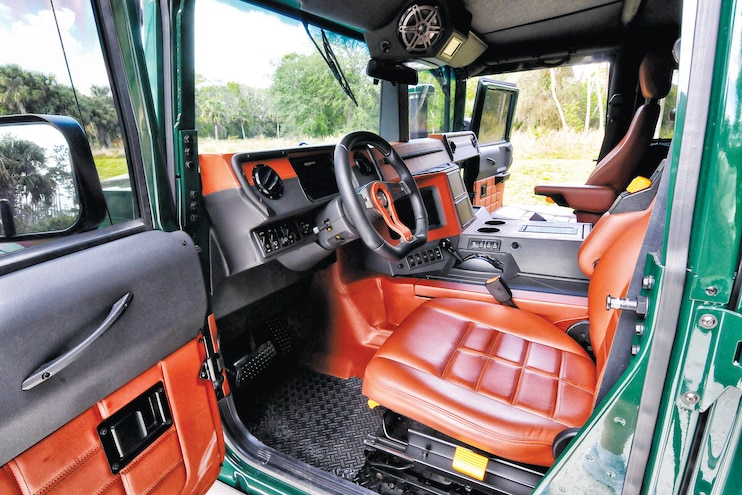 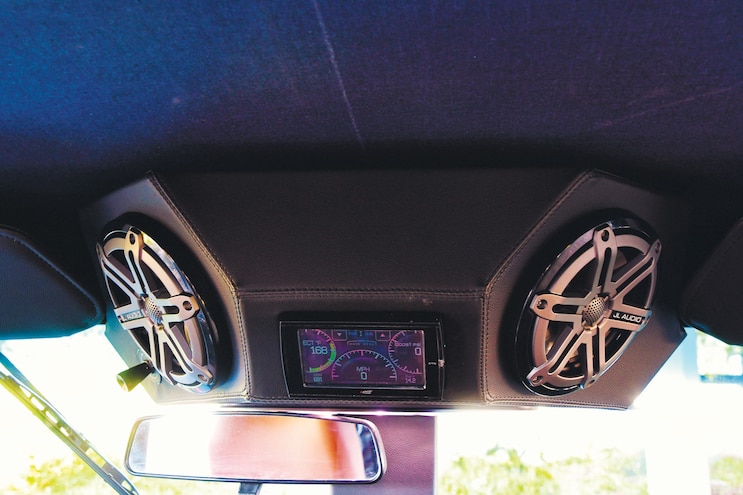 View Photo Gallery | 11 Photos
Photo 10/11   |   Hummdinger Interior
The redesigned dash features custom vent housings for the Vintage Air air-conditioning system using hand-fabricated plenums. The distinctive seats feature CNC-machined high-density polyethylene seatbacks. The seats, dash, and Momo flat-bottom steering wheel are upholstered in Moroccan Muted Orange and Dark Charcoal vinyl, stitched by Avant-Garde Design in Palm City, Florida. The H1’s high-tech electronic package begins with a ride controller Bluetooth system that controls all the accessories as well as the audio and video.
For the ultimate approach to safety, there are four cameras onboard that look forward, backward, and, when the blinker is activated, to either side. Images are displayed on a pair of LCD screens in the center console. The iPad-controlled stereo features two JL Audio Marine Series amplifiers, eight 6.5-inch component sets, and a pair of 10-inch subs, all housed in CNC-cut, high-density polyethylene enclosures.
Inside, outside, and under the hood, the yearlong effort transformed the truck into a rolling work of automotive art, perfectly suited to take its place among the high-end and off-road vehicles in Chas’ collection. 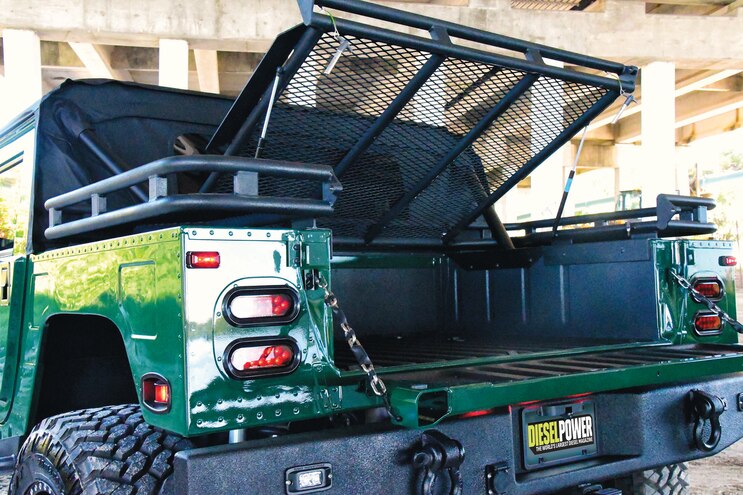