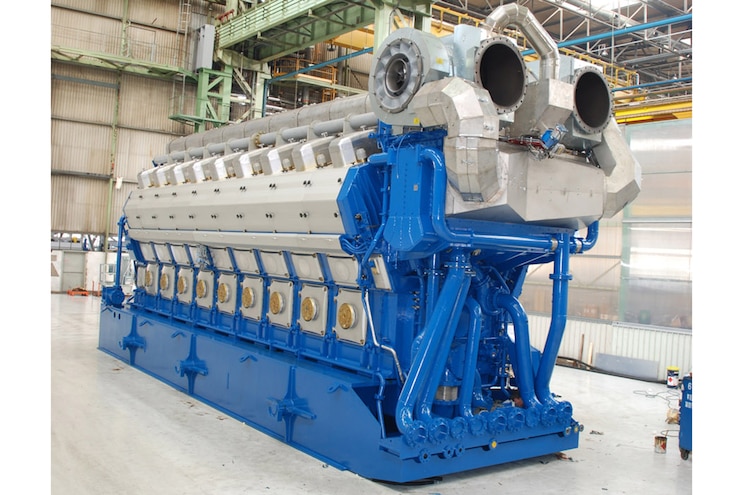 Today’s diesel-engine builders fight a never-ending battle for better economy and power, while keeping emissions within increasingly stringent standards. Designing new powerplants for use with different fuels has become more common—especially for large-displacement engines—and it is exactly what Wartsila did with its 50DF Series engines.
The 50DF is a family of four-stroke, dual-fuel (hence the DF) diesel engines designed to be used in seagoing vessels for constant speed generation or variable-speed mechanical-drive applications. The smallest engine in the line is an I-6 that weighs in at approximately 96 tons, while the largest member tips the scale at 240 tons or 480,000 pounds. The behemoth V-16 has a cylinder bore that is 19.7 inches across and displaces 125,092 cubic inches. There are a total of six different engine configurations in the 50DF line.
The engine is designed to run on different types of fuels with no distinction in performance between any of the fuel sources. It has an ability to operate on natural gas and two liquid fuels; heavy and light fuel oil. The fuels can be switched from oil to gas while operating at loads less than 80 percent without any engine hesitation. This is made possible by electronically controlling the gas substitution. The change from gas to liquid can be done at any load. Regardless of the fuel type, the oil-burner will not lose power or speed. Engine functions are controlled by an advanced automated system that allows for running conditions to be set independent of ambient conditions or fuel. 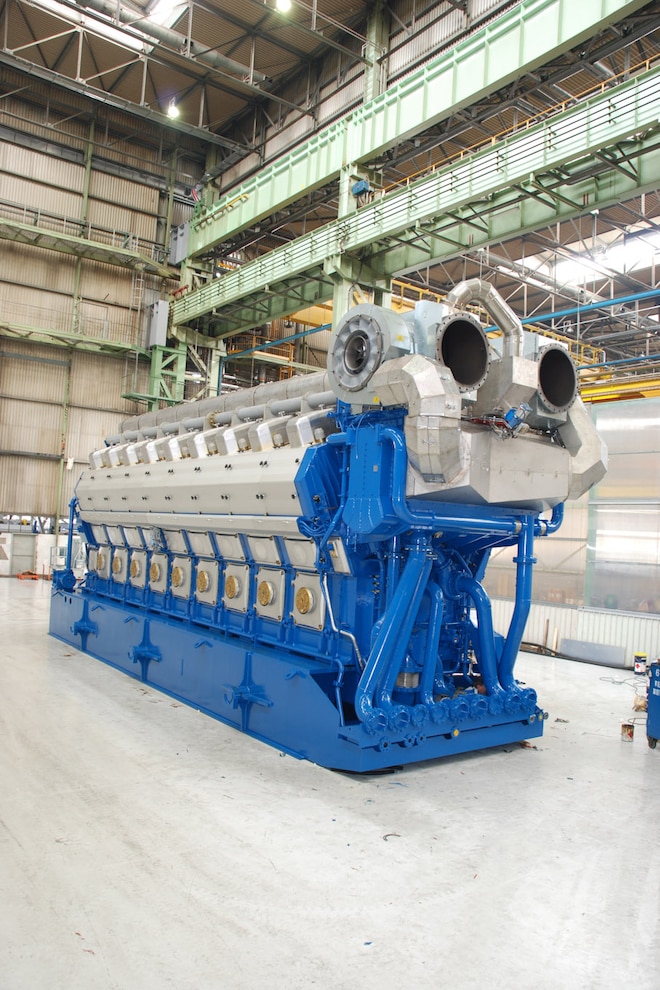 View Photo Gallery | 4 Photos
Photo 2/4   |   The Wartsila 50DF V-16 weighs an amazing 240 tons, displaces 125,092 ci, and produces 23,860 hp. The two high-efficiency turbochargers sit atop the engine and are regulated by electro-pneumatic wastegates.
Pilot fuel, along with the admission of natural gas into the cylinder, is electronically controlled so the correct air-fuel ratio can be set individually for each cylinder. This ensures the correct minimum amount of pilot fuel is injected for safe and stable combustion of the gas. Individual electronically controlled valves ensure all cylinders stay within operating parameters to avoid knocking and misfiring. The chance of any unwarranted load reductions and shutdowns is eliminated. The injection of pilot fuel is also used to cool the injector nozzles during operation.
The 50DF engines operate on a lean-burn principle whereby the mixture of air and fuel in the cylinder has an abundance of air. This lean combustion increases efficiency and power output while avoiding knock. It also reduces peak temperature in the combustion chamber that reduces nitrogen-oxide (NOx) emissions. The heat created by combustion is used to warm the large mass of air entering the engine, which also helps reduce the formation of NOx. 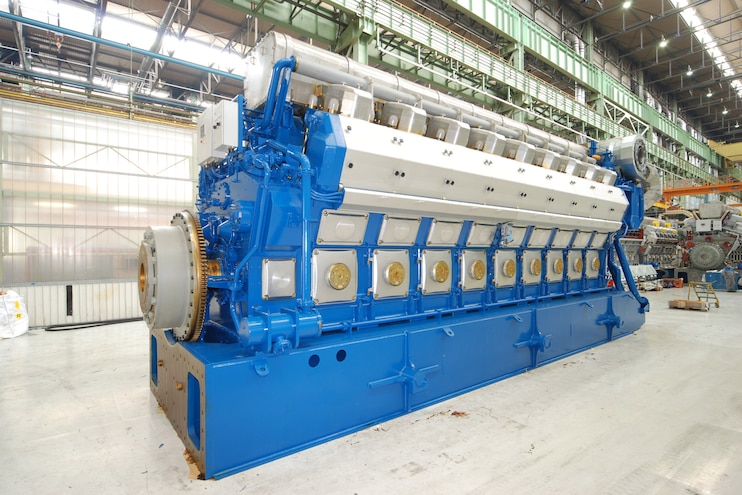 View Photo Gallery | 4 Photos
Photo 3/4   |   Wartsila 50DF
Along with the innovations used to reduce emissions, the use of gas as an alternative fuel reduces NOx emissions to at least 85 percent below current IMO standards and CO2 to a near 25 percent reduction over diesel fuel. The sulfur-oxide (SOx) and particle emissions are brought down to near zero.
Fuel delivery is divided into three separate systems: natural gas, liquid fuel, and pilot fuel delivery. Gas supply comes through a valve station that controls pressure; it is then filtered before entering the large common-rail pipes running through the engine. Each cylinder has its own individual feed pipe to a gas-admission valve in the cylinder head. The piping used in marine applications is of a double-wall design. A 50DF is normally started in diesel-fuel mode with pilot fuel. It can be switched to natural gas as soon as combustion is stable.
The pilot and liquid fuel are the two separate parts of the diesel-oil supply system. Pilot fuel goes through duplex filters, a regulator, and is brought up to pressure by an engine-driven, radial-piston-type pump. Delivery is through a common-rail pipe to the injection valves. Fuel is shot into each cylinder at approximately 900 bar. 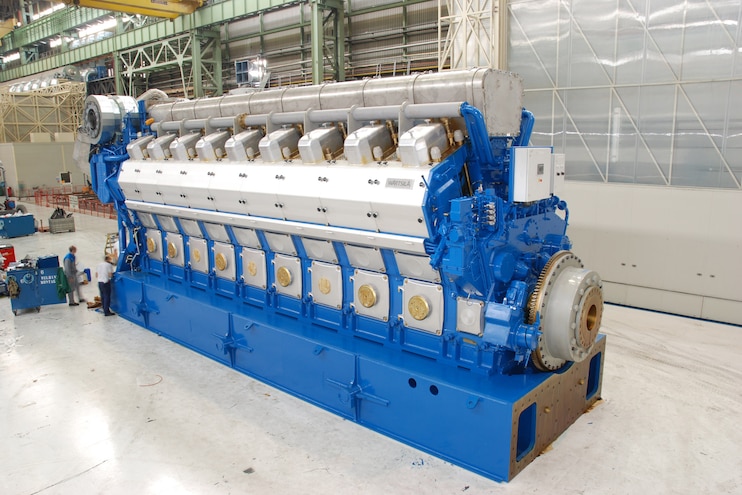 View Photo Gallery | 4 Photos
Photo 4/4   |   Wartsila 50DF View
The timing and duration of each pilot injector’s activation is controlled electronically. Liquid fuel is fed via a camshaft-driven injection pump to the spring-loaded, hydromechanically controlled side of the injection valve. Both the pilot and liquid fuel system use the same injection valve. It is a twin-needle valve, with the larger of the two being used for both heavy and light fuel oil. The other small valve is for pilot-fuel delivery in gas mode and nozzle cooling in liquid fuel operation.
The engine’s cylinder heads incorporate Wartsila four-screw technology. This design has proved superior at high cylinder pressures with the linear roundness and dynamic behavior of the cylinder. The head allows for air-inlet and exhaust-gas channels to be configured for efficiency. The flow of cooling water is optimized in the head to provide proper cooling of exhaust valves, the flame plate, and the twin-needle injectors. By doing this, thermal stress is minimized. Both inlet and exhaust valves have rotators to evenly distribute thermal and mechanical loads.
A three-piece connecting rod design is used so the low-friction, composite-type pistons (with a forged-steel top and nodular cast-iron skirt) can be overhauled without dismantling the big-end bearing. It also allows for the inspection of the large bearing without having to remove the piston. The big-end-bearing housing is hydraulically tightened to give the corrosion-resistant bearing a distortion-free bore.
Two high-efficiency turbochargers provide boost through an engine interface that has minimal flow resistance on both the exhaust and air sides. Electro-pneumatic wastegates regulate the turbos’ boost.