Faster Than the Speed of Night 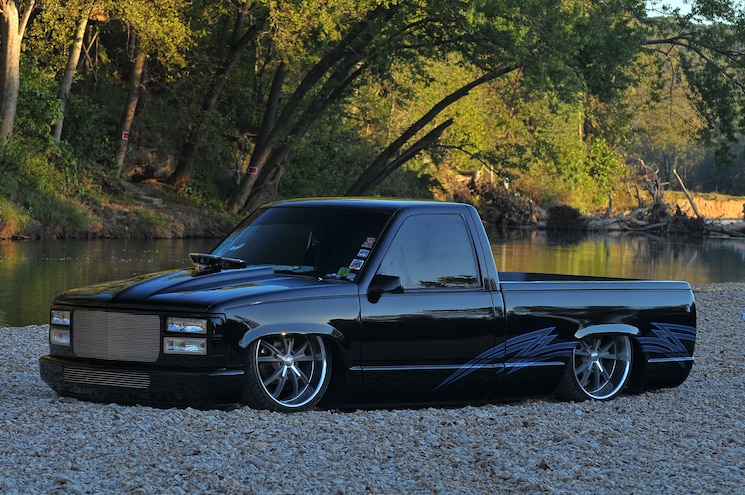 What happens when your father, uncle, and brother work on semitrucks? For Harley Dampier, the answer is: work on semis! Growing up alongside his father as he built custom semi-tractor trailers, a young Harley saw custom building as second nature. Aside from commercial rigs, Harley’s father, Brad, also had a collection of classic Chevy C10s at the house. When Harley turned 14, his father handed over the title to a ’71 C10. By the time he turned 15, Harley had a new drivetrain in and was driving the classic. By 16, the truck was painted and lowered, starting Harley’s passion for customizing trucks.
Although his name would suggest he works on motorcycles, trucks ran through Harley’s blood. When the C10 was on its last leg, he purchased a ’00 Silverado and began customizing the newer model. He and his brother David were both cruising with custom Chevy trucks when his brother decided to get out of the scene to start a new family. At that time, Harley thought maybe he should just concentrate on his work instead of trucks, so he sold the Chevy. That proved to be a mistake, as he yearned for another one shortly after. 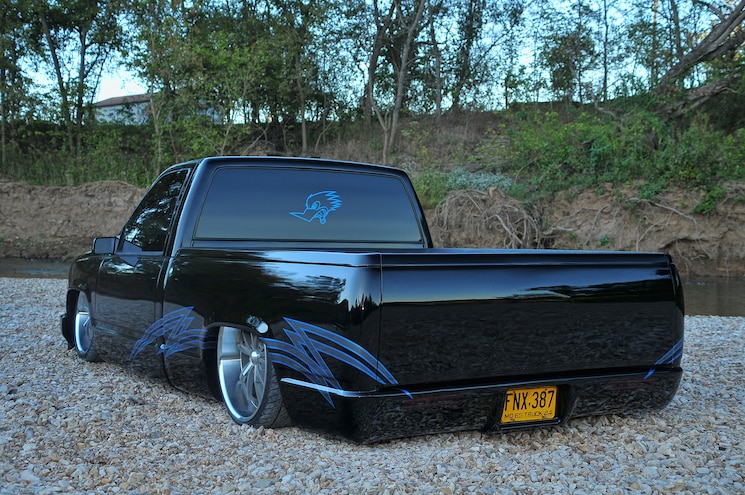 View Photo Gallery | 12 Photos
Photo 2/12   |   1995 GMC Sierra Black Night Rear
He found and purchased another ’71 C10 that was already built and started hitting shows with it. It identified as more of a hot rod than a cruiser, and working on the classic motor became a little too problematic. He put the truck up for sale, and a guy in Arkansas saw it and offered to trade for a ’95 GMC Sierra that had some work done to it. Harley took the four-hour drive to inspect the truck and drop his off. “The GMC was a little run down,” Harley tells Truckin. “It had changed hands a couple of times and clearly hadn’t been taken care of.”
When Harley got the truck back home, he inspected it closer and saw the frame had been dragged so badly it was bent. Both the fender and bumper were trashed and a ball joint was completely broken. Since Harley was into performance over anything, he removed the 4.3L V-6 and added a 5.7tbi V-8 inside the Sierra. As winter arrived in Missouri, he put the truck away for the season. While it was being stored, Harley utilized the time to clean the frame up and take the entire truck apart (down to the bare frame) to repair it. 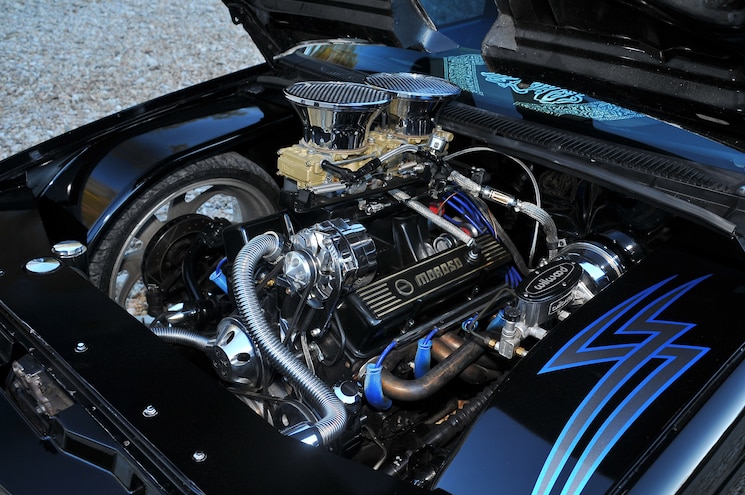 View Photo Gallery | 12 Photos
Photo 3/12   |   1995 GMC Sierra Black Night Engine
The frame was brought to a friend where it was put on a lift—12 hours later it was perfectly straight. Harley wanted to body drop the GMC but had never done so before, so it took trial and error. Harley channeled the cab over the frame and raised the transmission tunnel. The next step was adding suicide doors; Harley fabricated his own bracing and filler plates.
The next step was customizing the interior with a custom touch and a classic feel. The stock ’95 interior was gutted and replaced with a ’65 Impala dashboard as well as a ’65 Impala bench seat, where friend Ed Torrey worked his upholstery magic. Harley enlisted Kenny Green at Green Brothers Auto Body in Urbana, Missouri, to finish the bodywork by moving the bed forward an inch so the gap would be tighter. The stock step-side was removed and a fleet-side was put in place. 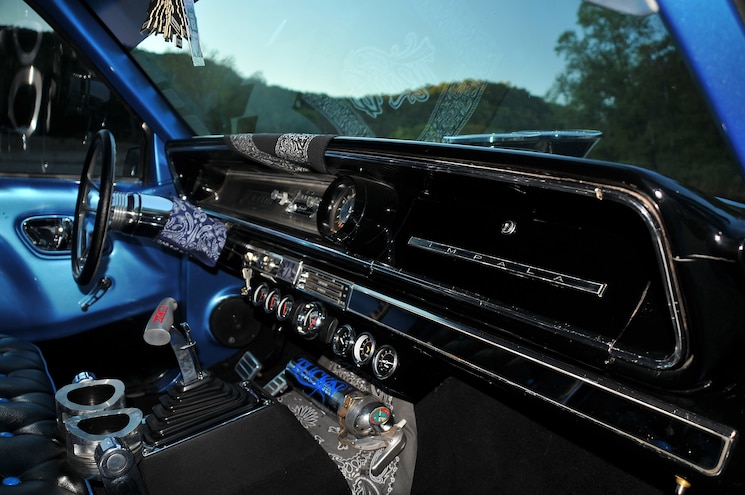 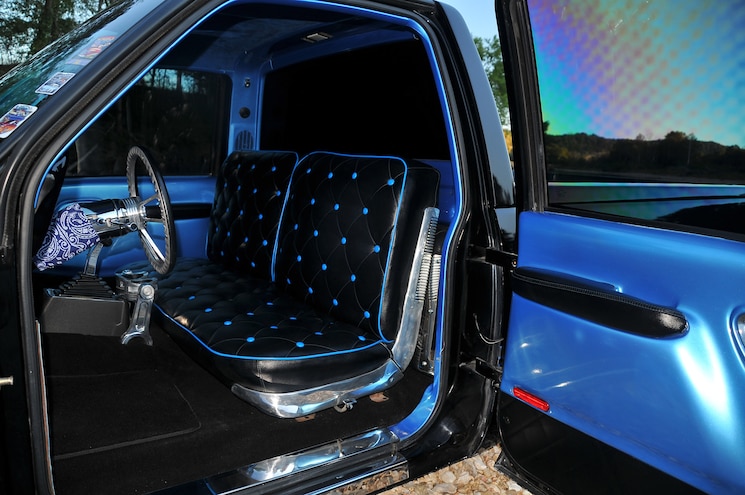 View Photo Gallery | 12 Photos
Photo 5/12   |   1995 GMC Sierra Black Night Interior Seat
The entire truck was shaved down smooth for a custom look. Once the body work was complete and the truck was in primer, a rich, black paint was added along with some intense blue graphics. Much to Harley’s shagrin, the very night the Sierra was pulled out of the body shop, the 5.7L engine blew up. He made the quick decision to go bigger and had a 406 built for the Sierra, which gave the GMC even more power.
Harley’s GMC had come full circle from the day he purchased it. He wishes to thank Kenny Green for all the bodywork and Paul Torrey for helping with the framework and wiring. A special thanks goes to Matt Haynes for helping with the suspension, and, most importantly, his parents, Brad and Beverly, and brother David for all their support and dedication to helping him find his passion. 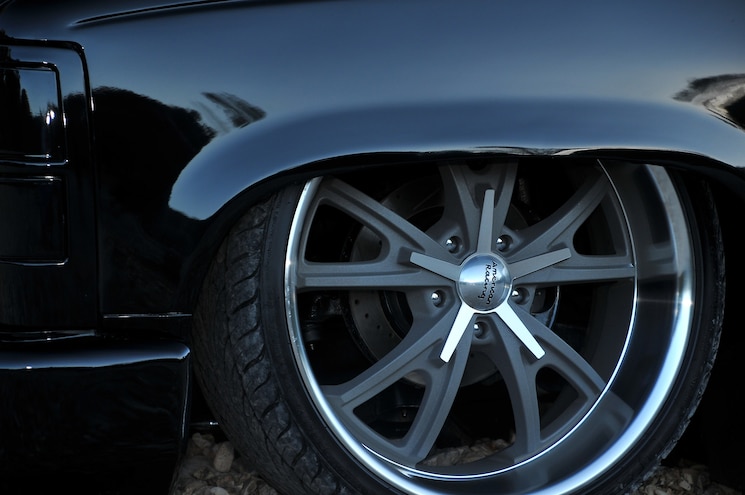