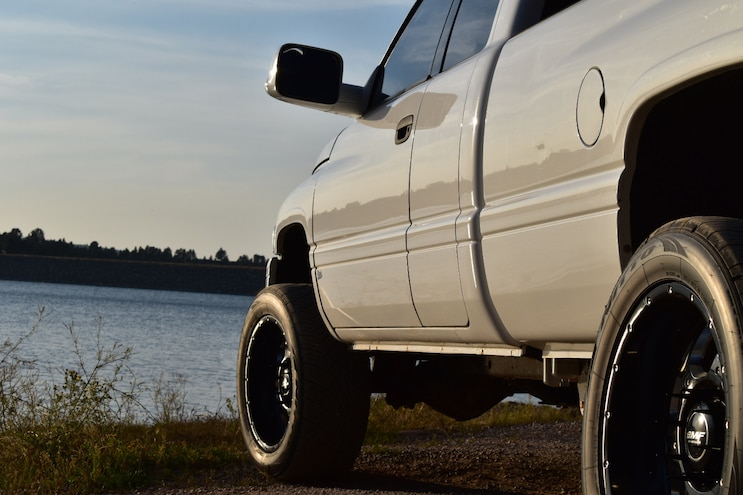 It’s not uncommon for former Diesel Power Challenge entrants to have some amount of notoriety in the enthusiast space—in fact, that fame is one reason many DPC competitors are voted into the contest in the first place. That’s the case with DPC 2017 alumnus Levi Krech, an alternate who was accepted into the Challenge in the eleventh hour and whose ’06 Dodge Ram 2500 achieved impressive results in the dyno, quarter-mile drag race, and eighth-mile trailer-tow segments.
Levi’s fame in the industry is driven in part by his diesel shop, Unique Performance LLC. Based in Gillette, Wyoming, Unique Performance became the shop of choice for Jeffrey Benson, who lives across the state border in Hot Springs, South Dakota. Jeffrey had heard of Unique Performance before and liked what the shop was doing with diesel trucks.
“It all started when I saw the kind of work Levi does,” Jeffrey says. “I knew that’s who I was going to have work on my truck.”
What started as a simple enough tint job on Jeffrey’s ’00 Dodge Ram 2500 turned into a full-blown project, owing to the shop’s excellent work. “Between the customer service at Unique Performance and how professional they are, the truck turned into a complete build,” he says. The end result is a rig that looks even cleaner than its 108,611 miles (and counting) suggest. 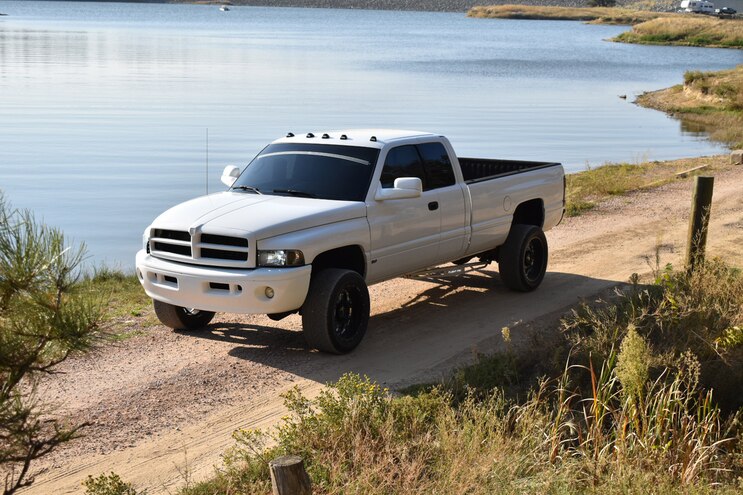 View Photo Gallery | 18 Photos
Photo 2/18   |   If you want a great finished result, start your build with a great base. Case in point: Jeffrey Benson’s low-mileage ’00 Dodge Ram 2500, which was already a solid, well-running, rust-free truck. 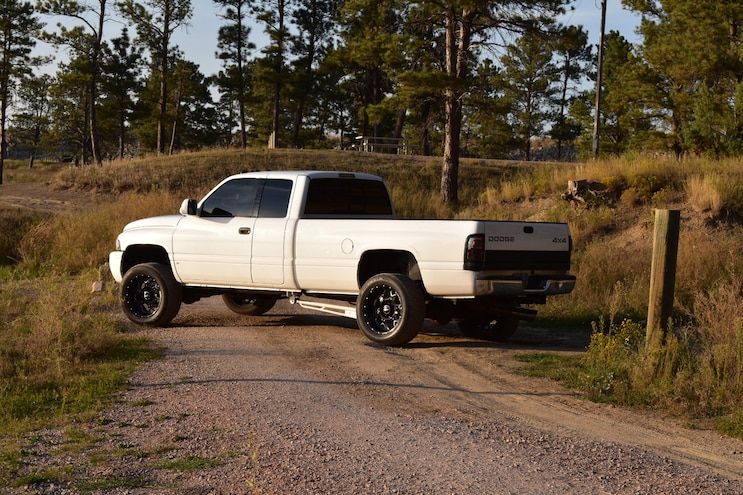 View Photo Gallery | 18 Photos
Photo 3/18   |   2000 Dodge Ram 2500 Word Of Mouth
The truck started out very nice, clean, and equipped with a 5.9L Cummins 24-valve engine and five-speed manual transmission, with plenty of luxury thanks to leather seats and chrome bumpers. But while it was in excellent original condition, Jeffrey wanted his truck to have just a bit more verve, both in styling and performance.
In went a set of compound turbochargers, with a Forced Inductions 80mm turbo feeding an Industrial Injection Phatshaft 62mm snail. An Industrial Injection Hot Rod VP44 injection pump takes fresh diesel from an AirDog II-4G lift pump capable of pushing 165 gph of clean, pure fuel. A Quadzilla Adrenaline programmer is used to load tunes into the ECM. 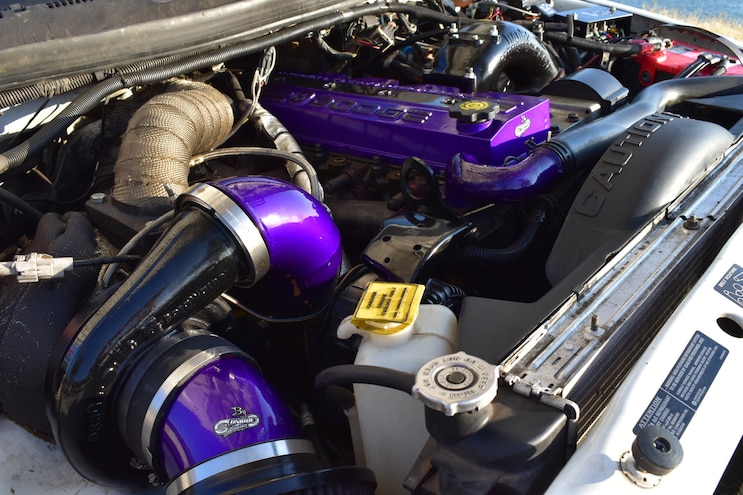 View Photo Gallery | 18 Photos
Photo 4/18   |   Cosmic purple makes a bold appearance under the hood of Jeffrey’s rig. The color scheme is perfect—sleek and understated on the outside, wild if you’re close enough friends with the owner to peek under the hood. 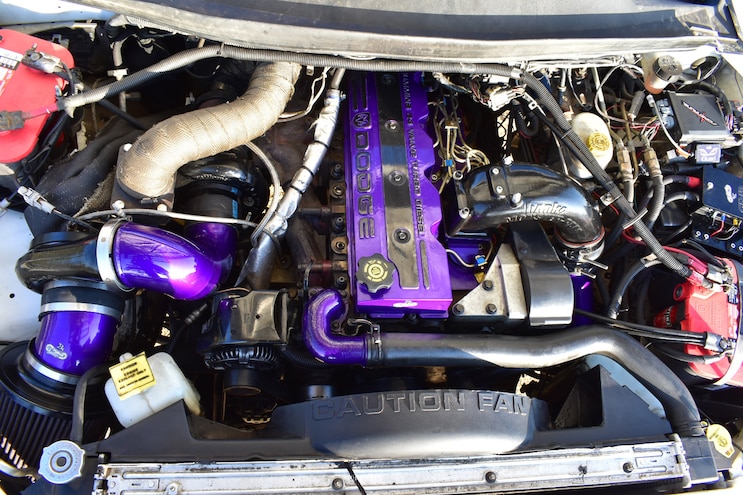 View Photo Gallery | 18 Photos
Photo 5/18   |   2000 Dodge Ram 2500 Word Of Mouth Engine
Routing all the engine’s 700-plus horsepower to the NV4500 five-speed manual is no easy task, but it’s one the South Bend dual-disc clutch is up for. And all that power is transmitted to 305/50R20 Nitto 420S tires, mounted on 20x10 Novokane wheels from BMF Wheels. Flight Fabrications ladder-style traction bars bolster the stock suspension and axles on hard launches, preventing axlewrap and undue wear. 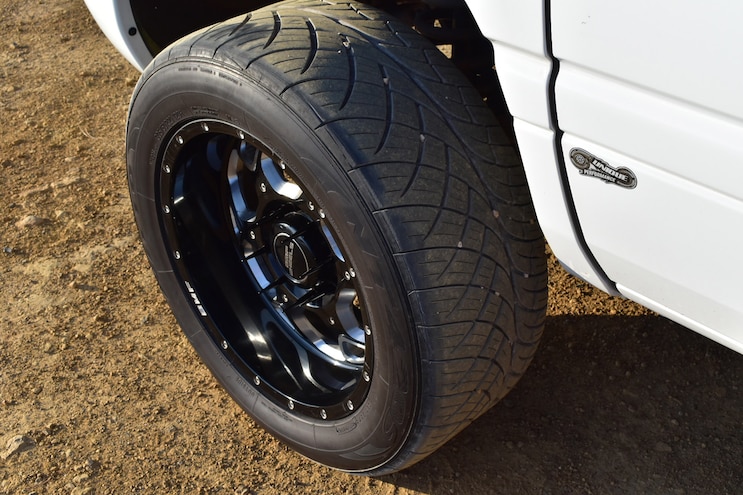 View Photo Gallery | 18 Photos
Photo 7/18   |   A set of Flight Fabrications traction bars keeps the stock rear axle planted, even with 1,400 lb-ft of torque twisting its way through the driveline.
All this mechanical labor took place over a period of several months—Jeffrey bought the truck in November 2016 and sent it to Unique Performance for the tint job a few months later. From then, it took several back-and-forth trips between Gillette and Hot Springs while Unique upgraded the truck bit by bit. Finally, with the mechanicals sorted out, it went under the knife for some cosmetic surgery.
The front end was upgraded with the popular Sport front bumper mod, replacing the stock grandpa-chic chrome and black plastic chin. The front bumper and tow mirrors were painted in the same Bright White as the hood and grille, which had already been dechromed. The traction bars also got color-matched, helping them pop and warning would-be street racers of the power and torque routed to that rear axle. Dark-finished head- and taillights give the truck a slick and aggressive mien, but on the whole, it’s a conservative build—no wild smokestacks, 28-inch wheels, outrageous body modifications, or elaborate body wraps. The only wacky colors are found under the hood, where electric purple carries the day. 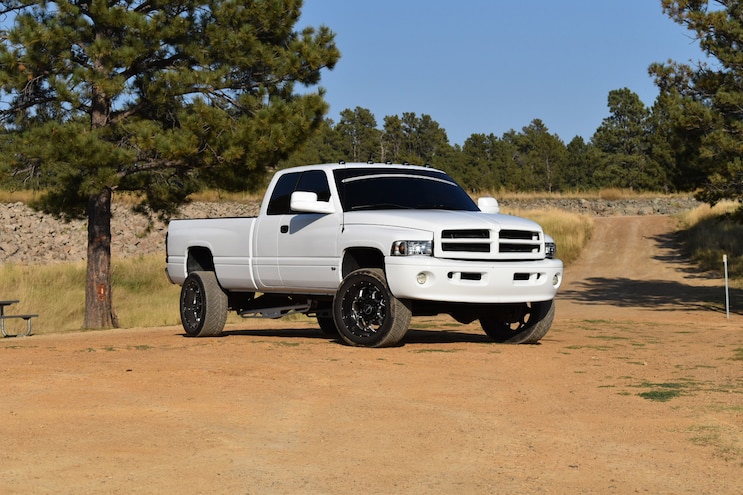 View Photo Gallery | 18 Photos
Photo 8/18   |   Jeffrey’s 2500 looks the part, with a color-matched grille, tow mirrors, and Dodge Ram Sport front bumper to give it a sophisticated new look.
The interior pushes that sophisticated theme even further. The mostly stock cockpit features factory leather in excellent condition, wood-tone trim…and not much else. The only clues from behind the driver seat that this Ram has something extra to give are the A-pillar gauges and the tingling feeling one gets by pressing the accelerator. 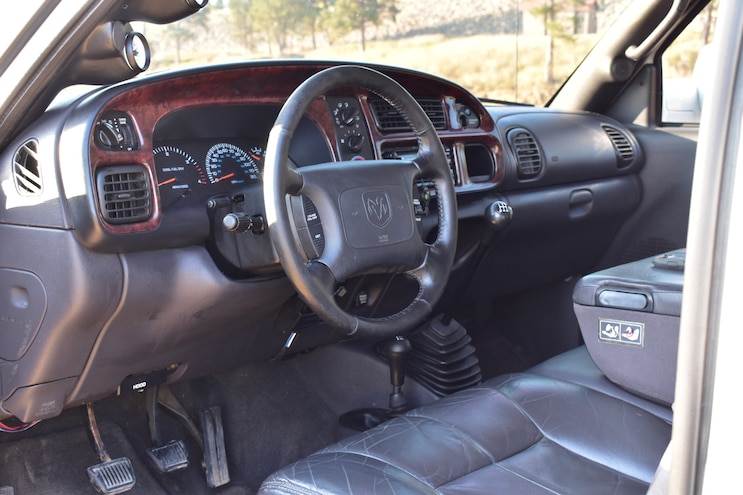 View Photo Gallery | 18 Photos
Photo 9/18   |   The Dodge Ram 2500’s leather interior looks almost like it did on the showroom floor, with very few clues this truck is a monster. Gauges in the A-pillar–mounted pod monitor boost and fuel pressures and exhaust gas temperature. 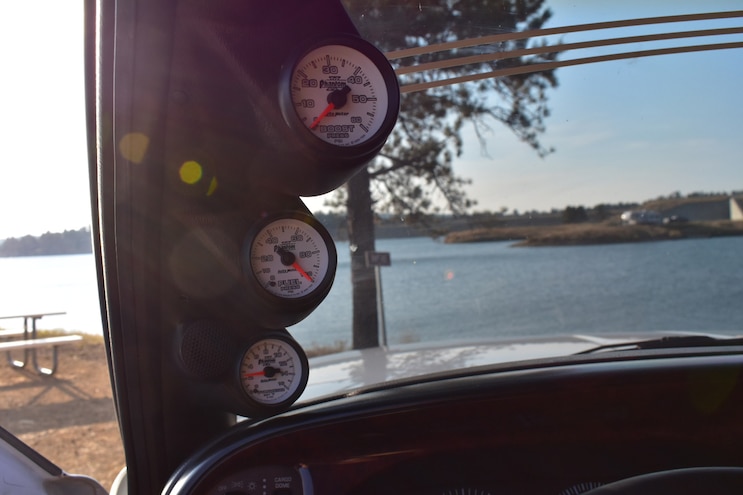 View Photo Gallery | 18 Photos
Photo 10/18   |   2000 Dodge Ram 2500 Word Of Mouth Gauges
What’s most impressive about the old Dodge is Jeffrey had an idea of what he wanted but wasn’t positive of how to get there. By trusting Unique Performance, he was able to build his old truck into something on another level.
“Levi knew exactly what I wanted and turned the truck into a one-of-a-kind masterpiece,” he says. We agree wholeheartedly. 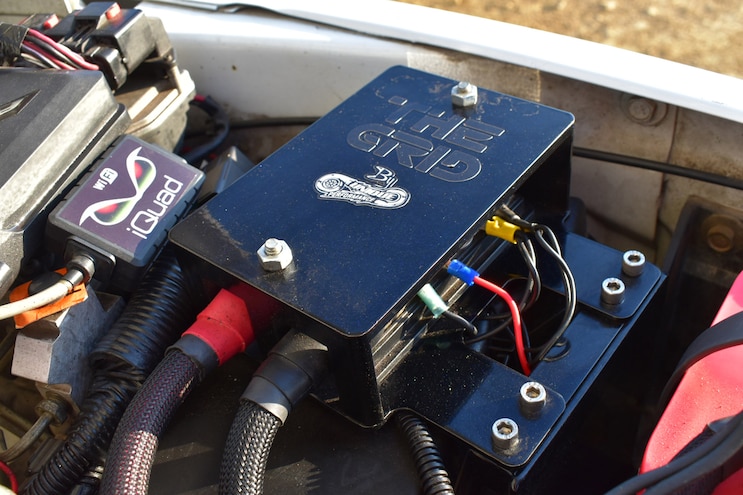 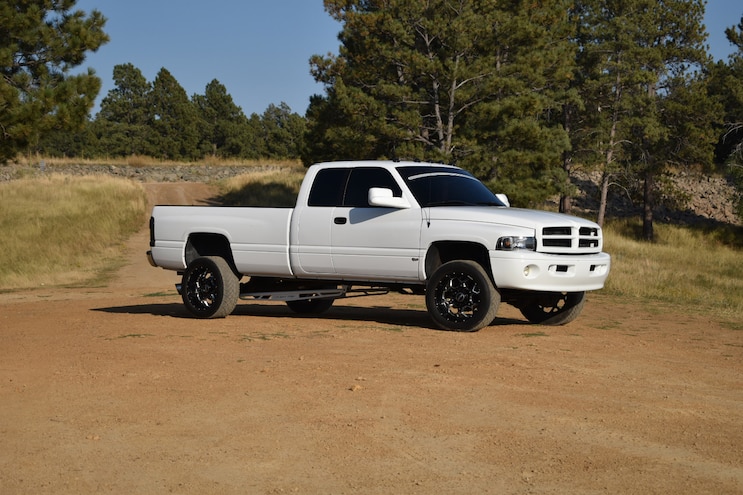