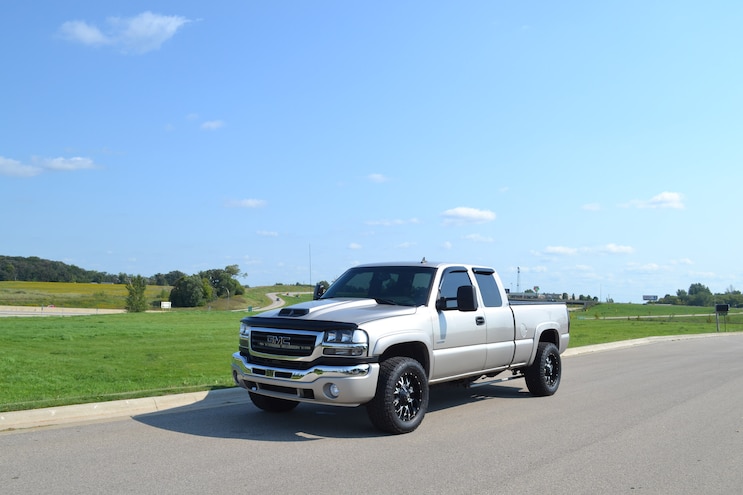 Brody Olson is quick to remember his first diesel pickup: an ’02 Ford F-250 with the vaunted 7.3L Power Stroke V-8 engine. He was sucked into the diesel hobby through that rig, and he hopped it up with a programmer, cold-air intake, exhaust, and gauges. With those basic modifications, the Ford was quick—but it left Brody wanting more.
“I started adding it up, and building a 7.3L to make more than 500 hp was going to be a pretty expensive proposition," he says. "It was a great truck, but there were more sensible options out there for the power I wanted.” In a bold move, Brody switched brand allegiance, moving to an '06 GMC Sierra 2500 HD powered by the legendary 6.6L Duramax engine. “I knew Duramax-powered trucks could get close to 500 hp with just a tune and a lift pump, so for me it was a no-brainer,” Brody adds. After buying the truck, he did just that. Then he began tinkering with ECM tuning through EFILive. 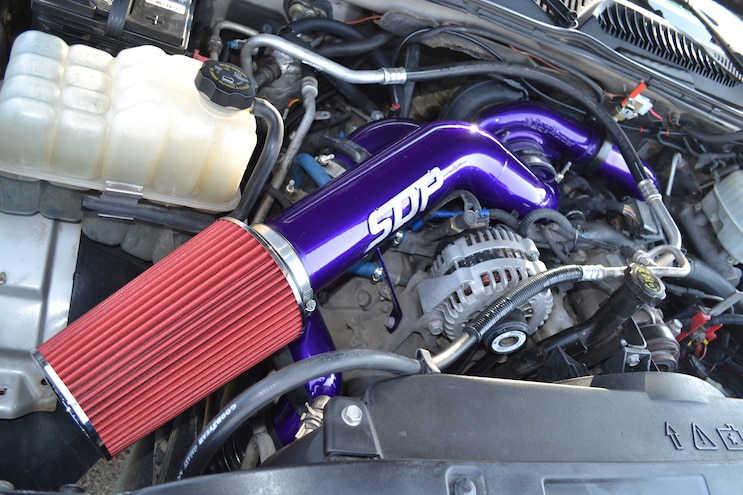 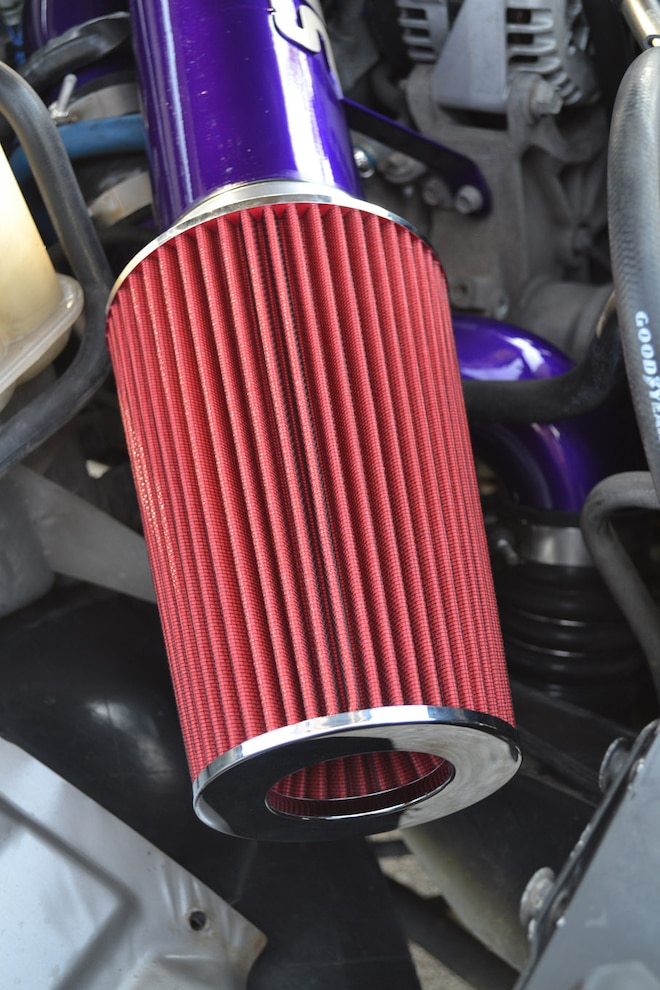 View Photo Gallery | 21 Photos
Photo 3/21   |   The stock Garrett turbocharger was swapped with a much larger BorgWarner S300 turbo.
“I started drag racing and quickly got hooked. It's just too much fun to beat up on modern muscle cars with a diesel,” Brody says with a chuckle. After more tweaks and tuning, the truck was able to run an impressive 12.74-second quarter-mile e.t. “I'm pretty proud of that time, as it was recorded using a stock turbocharger, CP3 injection pump, and injectors—at full weight,” he notes. As local trucks (some of which he tuned) started catching up, Brody knew that once again it was time for a change. The big additions for the Sierra centered on a turbo upgrade from Stainless Diesel Performance. The setup includes a 69mm S300-based BorgWarner ’charger, air intake, and custom Y-bridge. While the stock turbo starts petering out just beyond 500 hp, this new one is capable of nearly 300 more. In addition to the airflow upgrade, the fuel mixture is enhanced by a DevilsOwn water-methanol injection system. 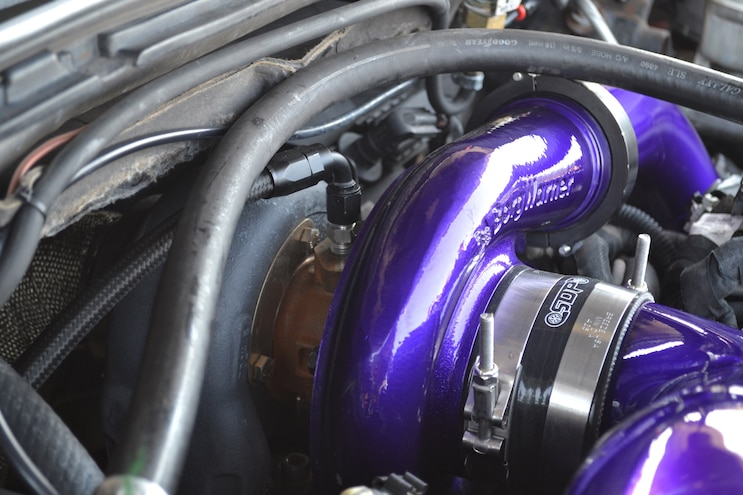 View Photo Gallery | 21 Photos
Photo 4/21   |   The 69mm turbo was chosen for its quick spooling and ultimate power potential. As Brody keeps upgrading the rest of his engine, his turbocharger can keep pace, up to nearly 800 hp! 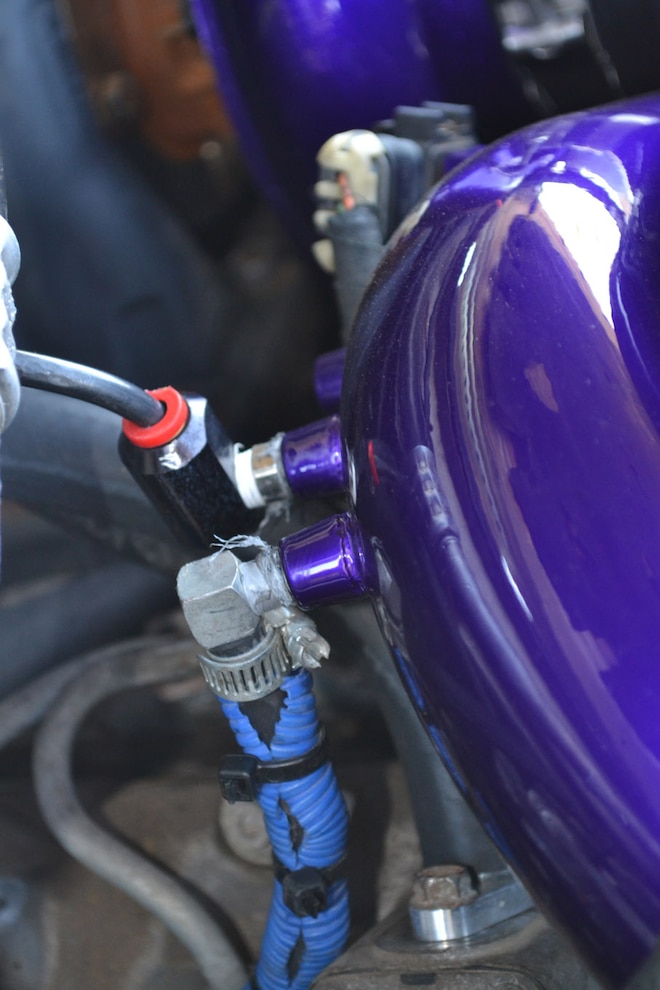 View Photo Gallery | 21 Photos
Photo 5/21   |   Exhaust gas temperatures are kept under control with a DevilsOwn water-methanol injection kit that sprays a 50/50 mixture into the intake. 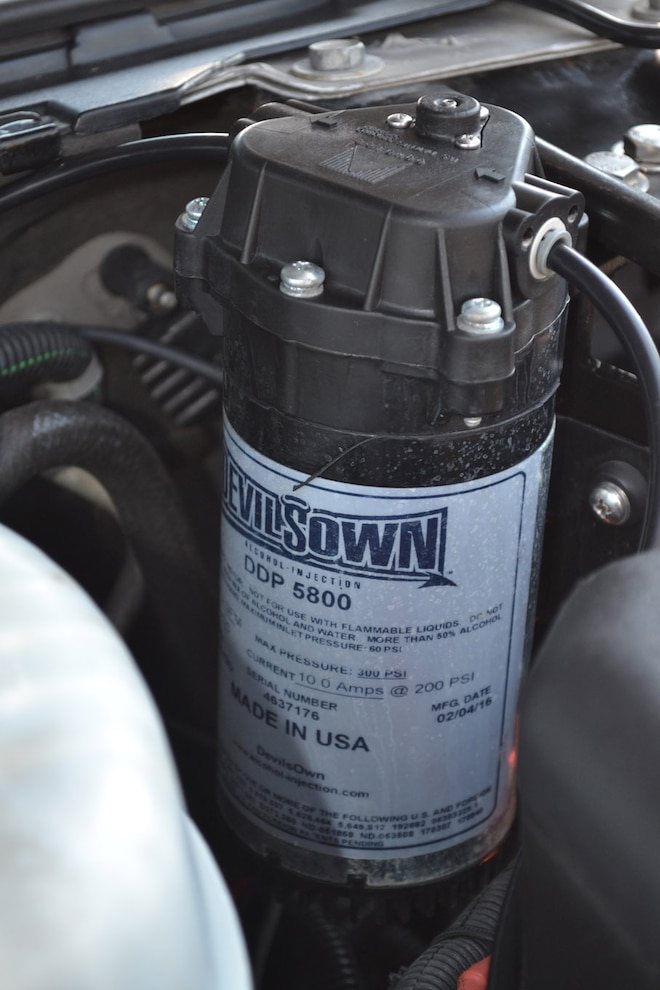 View Photo Gallery | 21 Photos
Photo 6/21   |   Brody wanted everything to appear as clean as possible, so the pump for the water-methanol kit is mounted in the engine bay, where it can provide a straight, quick shot into the engine.
With more power comes greater responsibility—for the transmission! A stout Allison 1000 six-speed automatic is another key element of the build. With help from Goerend Transmission, Brody rebuilt the unit using Inglewood Transmission trim springs and a Goerend planetary and C2 upgrade. A prototype R torque converter replaces the stock piece, and lockup is controlled by a Fleece Performance Engineering AlliLocker.
With the transmission solidly reinforced against failure, the truck’s suspension still needed some help. GM trucks’ independent front suspensions are known for bending tie rods under hard dragstrip launches. The front end is outfitted with Moog tie rods, Fleece Performance Engineering tie-rod sleeves, and Bilstein 5100 shocks. The same 5100s are installed out back, along with 2-inch drop shackles and custom traction bars. 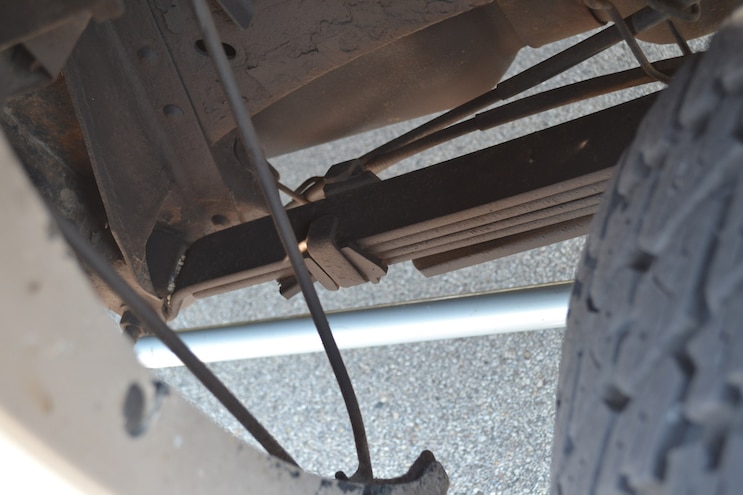 View Photo Gallery | 21 Photos
Photo 7/21   |   Brody kept the suspension changes on his ’06 basic and subtle. The front end is fitted with tie-rod sleeves for strength, while the rear is equipped with a set of drop shackles and traction bars. Bilstein shocks suspend the truck on all four corners.
Brody didn't go too wild with the interior and exterior of the pickup. “I still use it as a daily driver and to tow, so I really need it to be able to perform like a truck,” he explains. The stock body lines are accented with subtle modifications like a lightbar in the grille and a Styleline ram-air cowl hood. The wheels and tires are also changed: Dropstar 645MBs wear Nitto Terra Grappler tires. The interior is mostly stock, too, save for a few electronic and gauge upgrades. 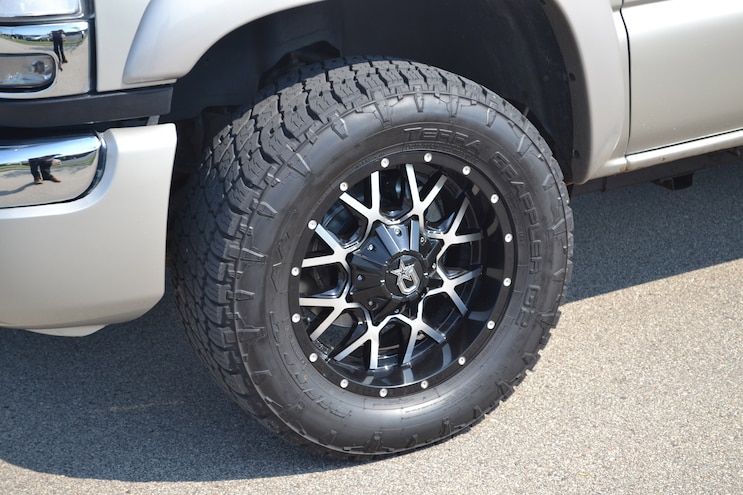 View Photo Gallery | 21 Photos
Photo 8/21   |   All-terrain tires ensure the Sierra 2500HD is ready for any type of weather condition. The Nitto tires are mounted on 18x9 Dropstar wheels.
While Brody has his eyes on additional modifications (injectors, CP3), he's still happy with the type of truck he was able to build on a budget. “I know that with 200,000 miles, the pistons, rods, and everything else have seen their fair share of abuse,” he says. “But as long as this truck keeps going, so will I!” 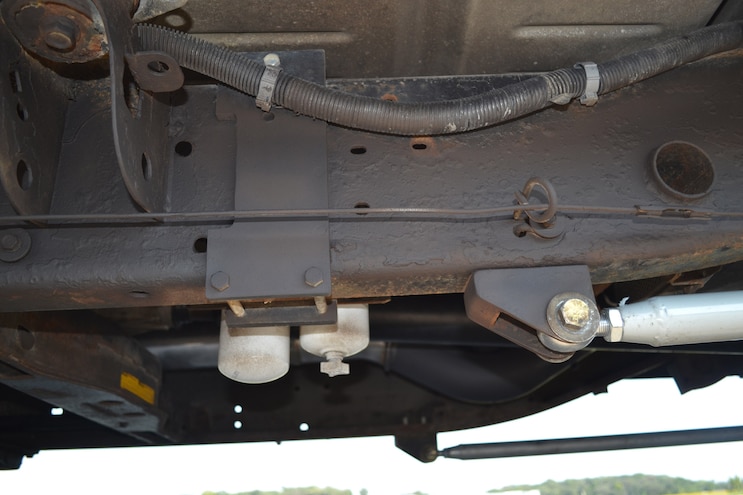 View Photo Gallery | 21 Photos
Photo 9/21   |   One of the first modifications many enthusiasts perform is a lift pump upgrade, and Brody is no exception. The 150-gph Air Dog pump sends ultra-filtered fuel to the engine and keeps the CP3 injection pump pressurized. 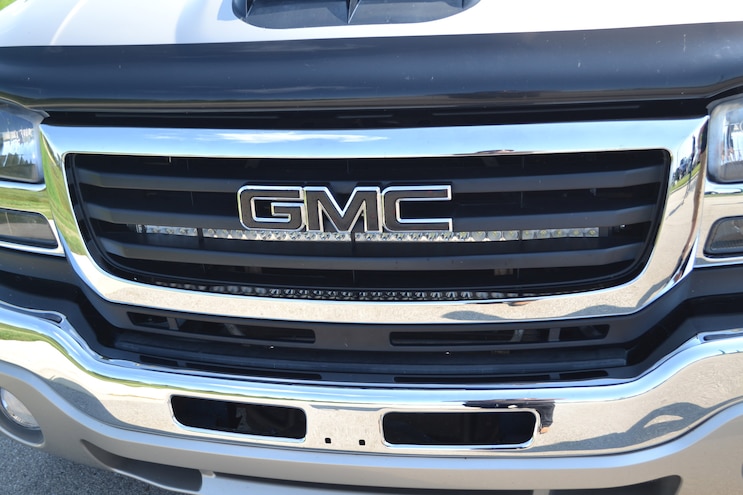 View Photo Gallery | 21 Photos
Photo 10/21   |   At first glance, we missed the integrated lightbar on the front of Brody's ride. It's one of the numerous small changes that keeps the truck looking smooth yet unique. 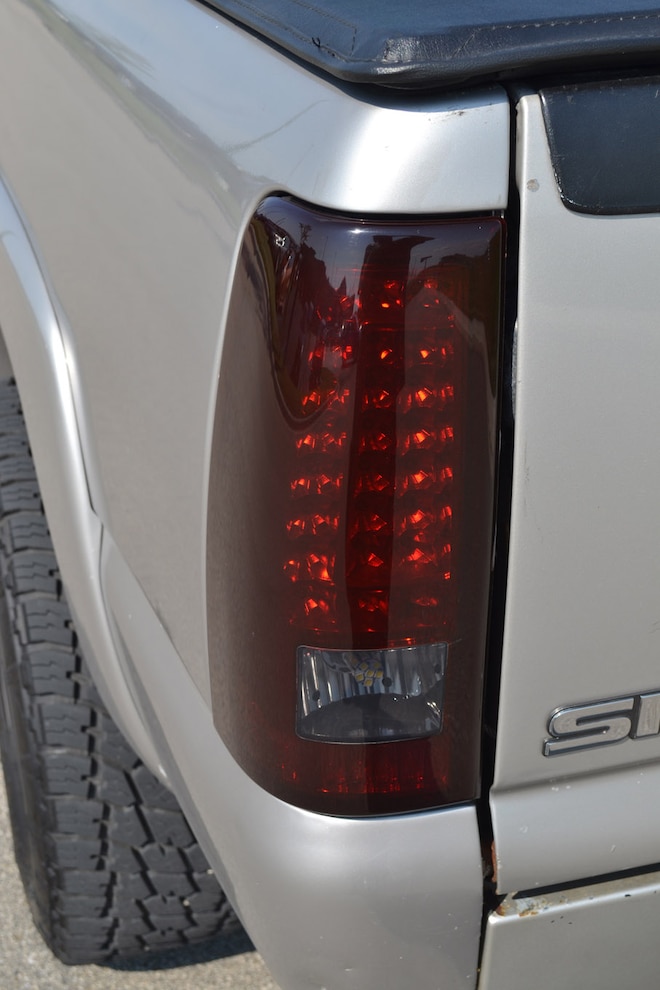 View Photo Gallery | 21 Photos
Photo 11/21   |   Another lighting change involves the various smoked light covers on Brody's truck. The taillights, foglights, and LED headlights were smoked before they were installed. 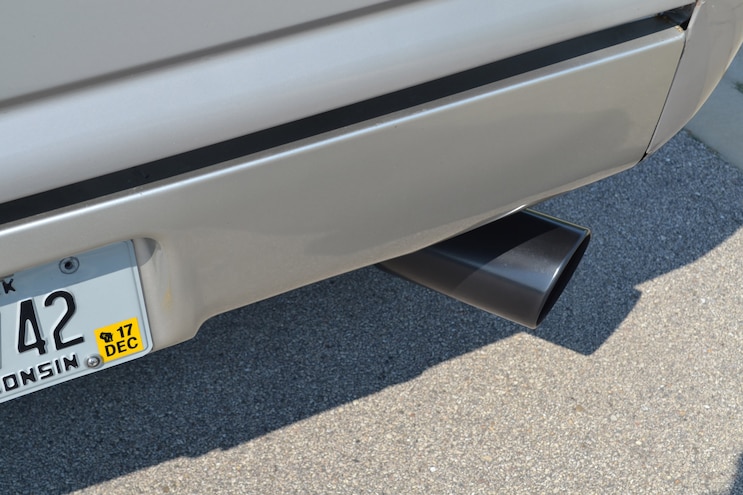 View Photo Gallery | 21 Photos
Photo 12/21   |   The rear is fitted with a hidden hitch and a roll pan. The 6-inch tip that connects to the Flo-Pro Performance exhaust can also be seen peeking out from the rear. 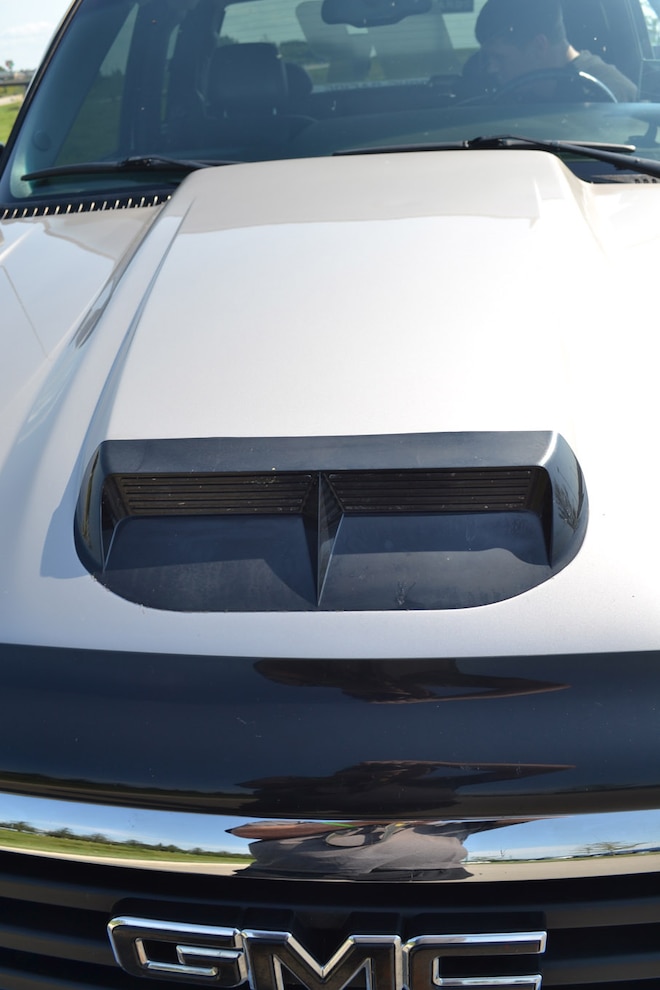 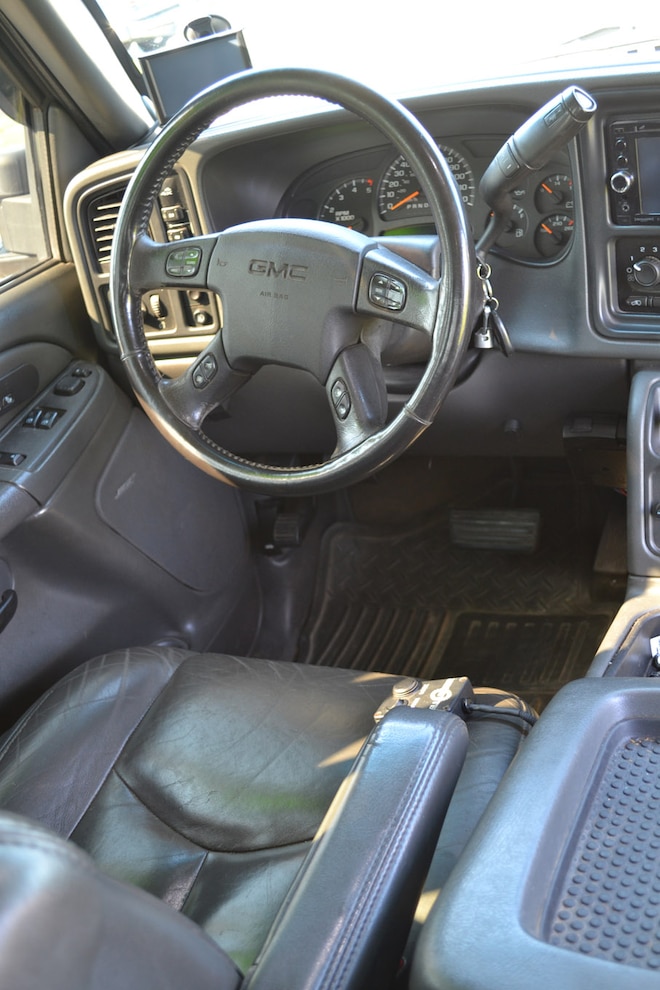 View Photo Gallery | 21 Photos
Photo 14/21   |   The leather seats are stock, but the rest of the interior is loaded with an Edge Products CTS II monitor and an extensively upgraded stereo system.