Diesel Power Products’ 2016 “Howitzer” Ram One of A Kind 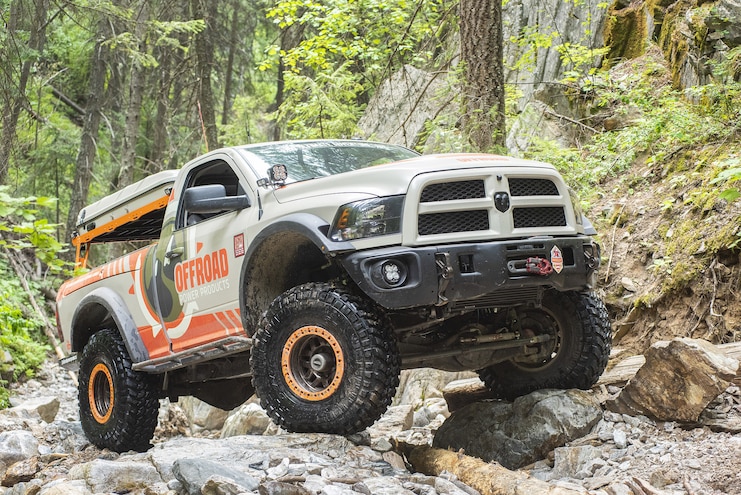 Howitzers are very effective weapons in modern warfare and have been for many years. These short-barrel cannons shoot ammunition over high trajectories with a steep angle of descent, requiring relatively small charges to fire.
During the Vietnam War, Cooper Rasmussen’s dad was a navigator in a U.S. Air Force AC-130E Pave Aegis—a gunship that sported a pair of 105mm Howitzers—which is how Cooper’s ’16 Ram 2500 got its unique moniker. Cooper is the general manager at Diesel Power Products and a key player in Howitzer’s build.
When Cooper and others at DPP head out to explore the backcountry’s most difficult trails, Howitzer’s power and capabilities point to competition rock buggies rather than the emissions-compliant expedition rig that it is.
Think of Howitzer as a hybrid of a rugged, powerful Ram 2500 Heavy Duty and a Jeep Wrangler Rubicon on 40-inch tires. It has the agility of such a Jeep’s supple, long-travel linked coil suspension matched to the stout underpinnings and drivetrain of the Cummins-powered Ram. 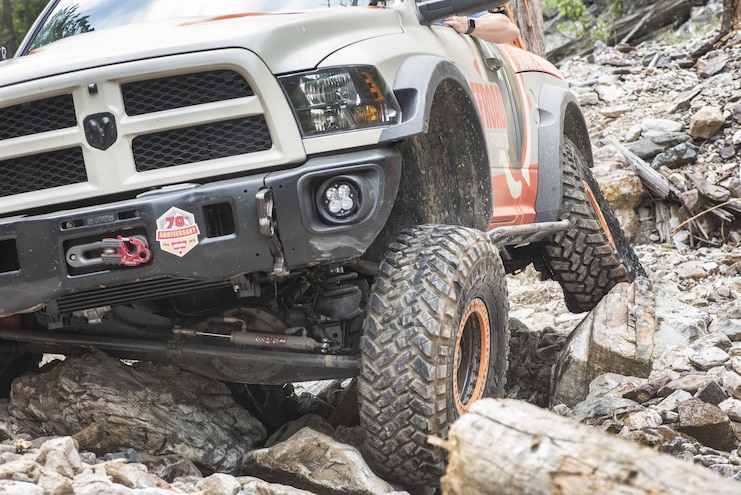 View Photo Gallery | 78 Photos
Photo 2/78   |   Cooper Rasmussen’s“Howitzer, a Cummins-powered ’16 Ram 2500, is at ease navigating rugged terrain thanks to extensive suspension modifications that provide 8 inches of front travel and more than 10 inches in the rear, so the 40-inch Nitto Trail Grapplers usually get traction. ARB Air Lockers at both ends also help.
“Our goal was to build a fullsize, expedition-style, diesel off-road vehicle that complies with all emission regulations as far as the exhaust and DEF system are concerned,” Cooper says. “The idea was born in 2013, but we waited until 2016 to do it so we could have a Ram 2500 that has the linked rear suspension. We wanted to see if it was viable to expect reliability and durability out of that platform with such a build.”
While the goal sounds easy, in reality, it took several months of custom fabrication and design work to pull it off. Cooper says the DPP crew began the build by grafting the rear frame of a ’16 crew cab on a ’16 Ram 2500 regular cab longbed. Then they tied a custom rollcage into the chassis and slipped on a 6.5-foot RamBox bed purchased from a salvage yard. The finished work looks every bit like it rolled off the Ram Truck assembly line.
Cooper and other members of DPP hopped up the project’s 6.7L Cummins engine with the goal of keeping the powerplant emissions compliant at the forefront. They updated the engine using Hamilton Cams’ 178/208 emissions camshaft and valvesprings to keep EGT low and provide faster throttle response, installed ARP cylinder-head studs, and added 90hp Dynomite Diesel Products injectors, along with an emissions-legal AFE Power intake manifold and BD Diesel Performance two-piece exhaust manifold. 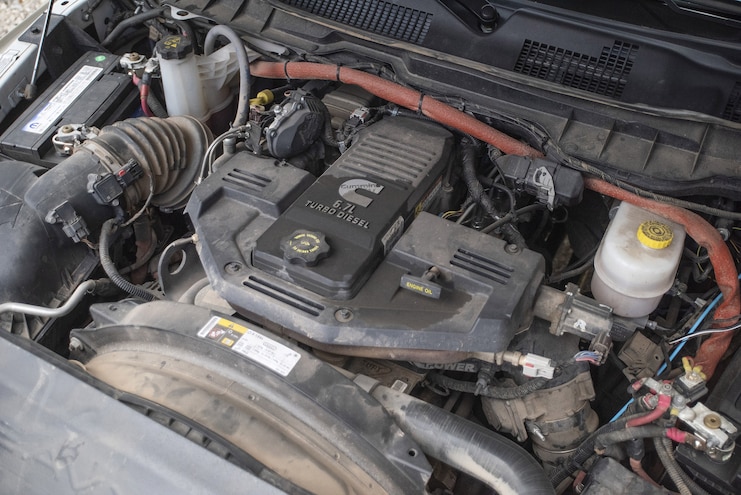 View Photo Gallery | 78 Photos
Photo 3/78   |   It looks stock, but Howitzer’s emissions-compliant 6.7L Cummins engine is stouter than a stock version of the Ram 2500 powerplant, thanks to modifications such as a BD Diesel Performance Screamer turbocharger, Hamilton Cams 178/208 camshaft, 90hp Dynomite Diesel Performance injectors, AFE Power intake, and BD Diesel Performance exhaust manifolds. Breakout Tuning Solutions’ emissions-intact ECM calibration ties it all together.
Air is fed to the engine by BD’s Screamer 64.5mm direct-replacement variable-geometry turbocharger through an S&B Filters cold-air intake setup, while fuel is supplied via a FASS Fuel Systems Titanium 150-gph lift pump to a BD 12mm CP3 injection pump. (The intercooler, up-pipes, and downpipes are stock with modifications to the exhaust to make it align with the bed and new suspension.)
“We were increasing fuel with the bigger injectors and Breakout Tuning Solutions ECM calibration,” Cooper explaians. “So we needed to match that increase as closely as possible with air to help prevent any premature plugging of the particulate filter. We’ve been running this truck for more than a year across the country and it still hasn’t had any DPF issues.”
The crew also beefed up the truck’s original 68RFE six-speed automatic transmission to better handle strenuous trail challenges. They again turned to BD Diesel Performance, upfitting the transmission with a flexplate, low-stall torque converter, 68RFE Protect Kit, and valvebody upgrade.
Like the engine modifications, there was a goal in mind with the transmission: “We didn’t want to load the motor up too much in the rocks while wheeling,” Cooper says. “So I chose the low-stall converter to keep the engine from getting into peak power when I power-brake on an obstacle. I don’t want to break my junk.”
On the chassis dyno, Howitzer makes a respectable 378 hp, which is almost 50 horses more than stock Rams deliver. Considering the parasitic horsepower loss from the drivetrain, the 5.13 Nitro gears, and 40-inch Nitto Trail Grapplers, the warmed-up Cummins is estimated to make around 750 lb-ft of torque while getting 12 to 16 mpg on the open road.
While body and drivetrain modifications may seem mild to some hard-core diesel enthusiasts, the attention the truck’s underpinnings received is an off-road maven’s fantasy.
In the rear, Offroad Power Products’ three-link is combined with AEV’s track bar relocation kit (forged track bar and high-steer arm) to get full suspension articulation when the front sway bar is disconnected. 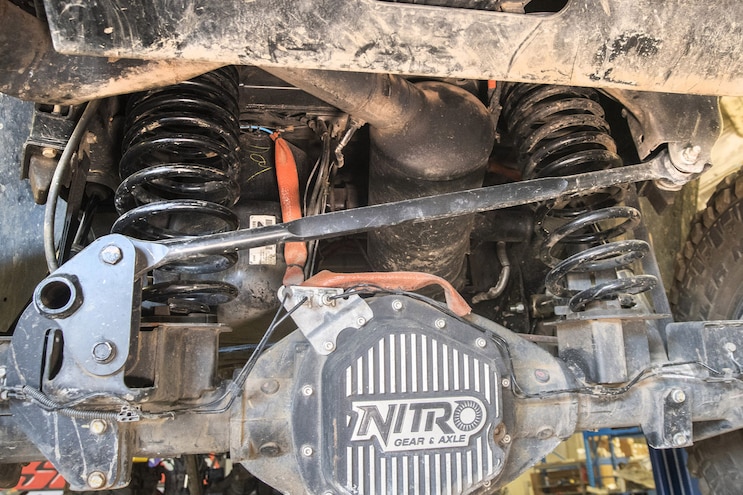 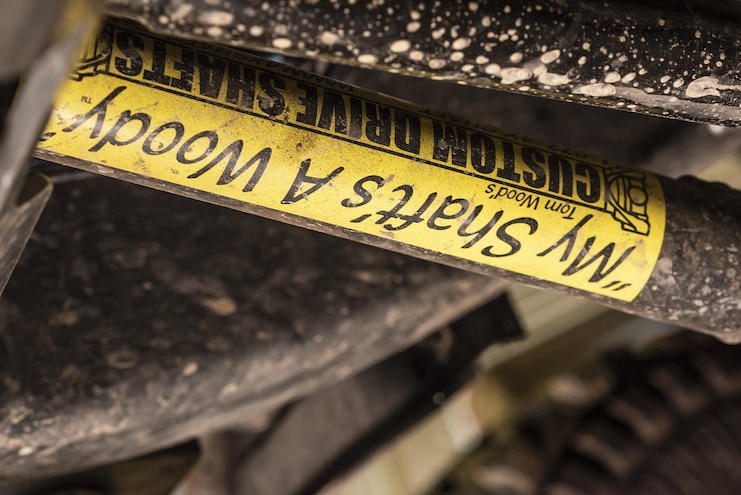 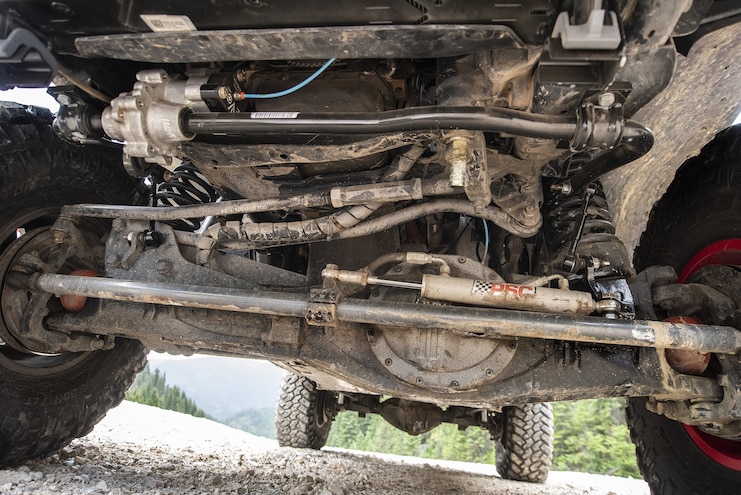 View Photo Gallery | 78 Photos
Photo 6/78   |   The Power Wagon disconnecting front sway bar fitted with an EVO Manufacturing Air Actuator is a nice compliment to the AEV track bar relocation kit, AEV high-steer arm, forged track bar, and custom Offroad Power Products three-link setup. PSC Motorsports hydraulic-assist steering makes it easy to swing the big tires in rough terrain. A Carli Suspension lower axle truss and AEV forged track bar provide additional strength to the big Ram’s most vulnerable components.
The rear suspension and AAM 11.8-inch axle were treated in a similar fashion, with an ARB Air Locker, AEV DualSport kit, and Pure Performance adjustable upper control arms and Johnny Joints, augmented with the same Fox shocks found up front. It’s a reliable, well-thought-out combination.
“This truck always feels comfortable, no matter what angle you get it at or how gnarly the terrain is,” Cooper says. “The linked suspension allows you to have a progressive-rate coil that handles load changes better than leaf springs. The coil suspension also allows for some really good articulation. Driving Howitzer basically feels like driving an oversized Jeep Wrangler.”
The interior and exterior elements of Howitzer are equally impressive, with comfort, safety, and functionality blended in a way that would make any multiday backcountry expedition a gratifying experience.
Mastercraft 3G Pro bucket seats, fitted with both four-point harnesses and factory seatbelts, keep driver and passengers secure, while a 100-watt Rugged Radios race radio mounted in the Havis Products police center console keeps them in contact with fellow adventurers. The console also houses the ARB air compressor for the lockers and the Switch Pros solid-state switch center that controls the Ram’s array of Baja Designs’ LED lights. Cooper relies on the Edge Products Insight CTS2 monitor’s digital gauges to keep tabs on the vitals. 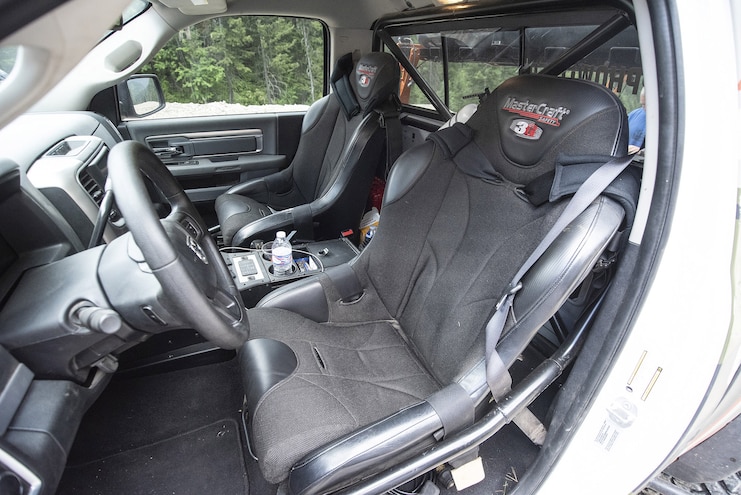 View Photo Gallery | 78 Photos
Photo 7/78   |   The Ram’s interior speaks to comfort and safety on- and off-road. The custom rollcage is tied into the chassis, and the Mastercraft 3G Pro bucket seats have both four-point harnesses and stock seatbelts so occupants can be as secure as they deem fit for the situation.
Self-recovery, which is seldom needed, is handled by a Warn Industries 16.5Ti-S winch mounted in an AEV front bumper fitted with multiple Baja Designs lights. Howitzer’s high-clearance rear bumper is a Mercenary Offroad creation that has corner reinforcements that tie in to the chassis.
Hidden behind and underneath the rear bumper is a Warn Zeon 12-S Platinum winch. KC rock lights are used under the truck and under the top rails of a custom Nemesis Industries aluminum bed rack that supports the James Barroud Discovery XXL three-person, rooftop, extreme-weather tent system. Where do Cooper and codriver keep their supplies? In the 6.5-foot bed and the RamBox’s side-storage compartments.
When one sees this rig operating at its finest on a demanding trail, it’s easy to equate it to an Army saying: Why bring a knife to a gunfight when you can come in with a Howitzer?! 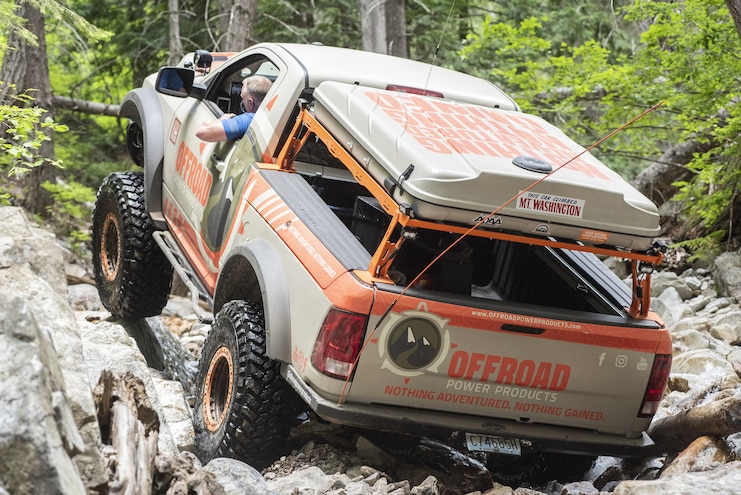 View Photo Gallery | 78 Photos
Photo 8/78   |   A Nemesis Industries custom aluminum roof rack is the perfect support for a James Barroud rooftop tent system, which is used by Cooper’s crew at Diesel Performance Products on days-long treks into the backcountry. The shortbed’s RamBox storage comes in handy for such outings. 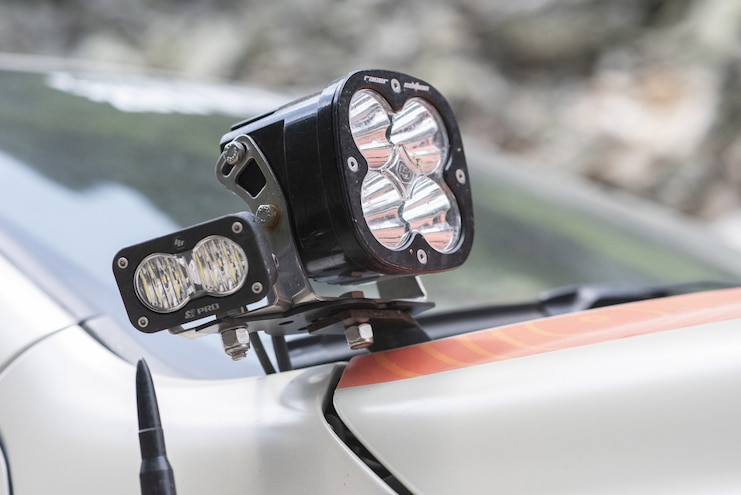 View Photo Gallery | 78 Photos
Photo 9/78   |   Forward-facing Baja Designs XL-80R LED lights and S2 floodlights on each aft corner of the AEV Heat Reduction hood provide plenty of light when darkness falls, along with a bevy of KC rock lights and more BD LEDs in the bumpers. 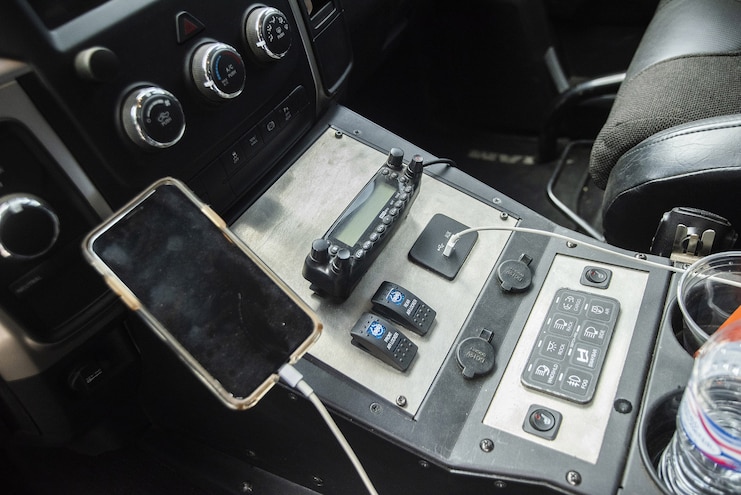 View Photo Gallery | 78 Photos
Photo 10/78   |   The police-style center console from Havis Industries hides the ARB twin air compressor and is ideal for mounting the rocker switches for the lockers. It’s also home to the Switch Pros solid-state switch center touchpad and houses a Rugged Radios 100-watt race radio. Everything is at the driver’s fingertips. View Photo Gallery | 78 Photos
Photo 11/78   |   Coming or going, Howitzer has self-recovery—or giving an assist to those who dare to follow in its tracks—well covered. There’s a Warn 16.5ti-S winch mounted in the AEV front bumper and a Warn Zeon 12-S Platinum mounted underneath, in place of the spare tire and behind the Mercenary Offroad wraparound rear bumper. 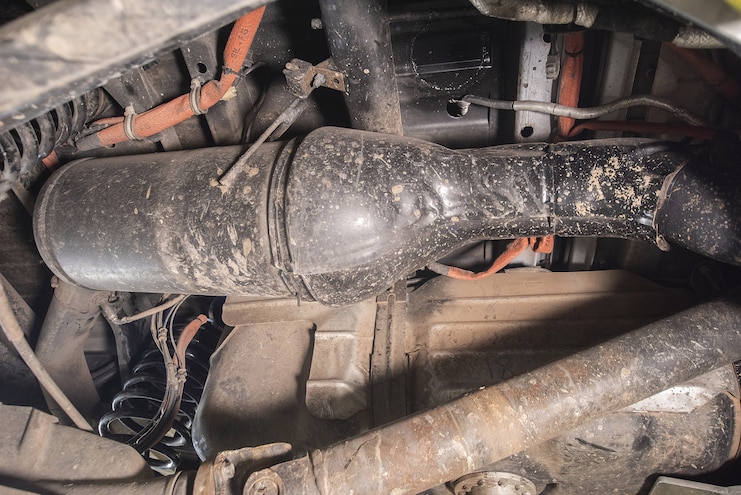 View Photo Gallery | 78 Photos
Photo 12/78   |   While many Ram diesel owners building such a rig would do everything they could to get rid of every piece of emissions equipment, Cooper made sure this one stays compliant, even going so far as to relocate the diesel particulate filter so it fits with the new suspension. View Photo Gallery | 78 Photos
Photo 13/78   |   What do the graphics on the sides and hood relate to? “Nothing,” Cooper says. “We just like the way the mountain graphics break up the Ram’s sides and massive hood space—and it looks good with the AEV heat reduction hood.”