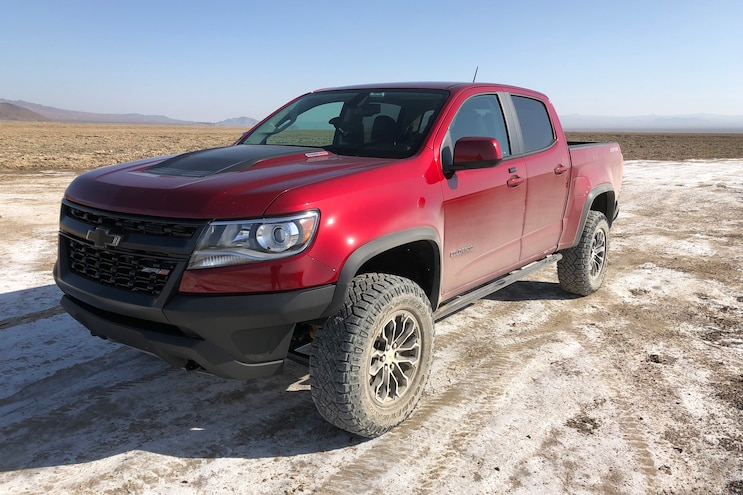 From a surprising concept that debuted at the Los Angeles Auto Show in 2014 to a full-fledged production truck in 2018, Chevy has awakened the souls of midsize off-road enthusiasts. With real performance in mind, the team at Chevy got serious by enlisting the help of Multimatic for a revolutionary shock design, engineering an electronics-off off-road driving mode, and equipping the ZR2 with front and rear lockers. It is clear that Chevy’s Colorado ZR2 team came to win.
The real headline is that the ZR2 sits 2 inches higher than a non-ZR2 Colorado and has revolutionary spool valve shock technology—something used on the racetrack and toyed with in the off-road market, but never before on a factory off-roader. These shocks have very distinct ride characteristics, almost feeling like they’re equipped with hydraulic bumps, minus the noise. Also included with the ZR2 package are a wider track, 31-inch Goodyear DuraTrac tires, front and rear electronic lockers, rock rails, almost full skidplating (a fuel tank skid is curiously absent), all-off traction and stability electronics, a matching spare, spray-in bedliner, trailering package, and a few stylistic differences over the standard Colorado. 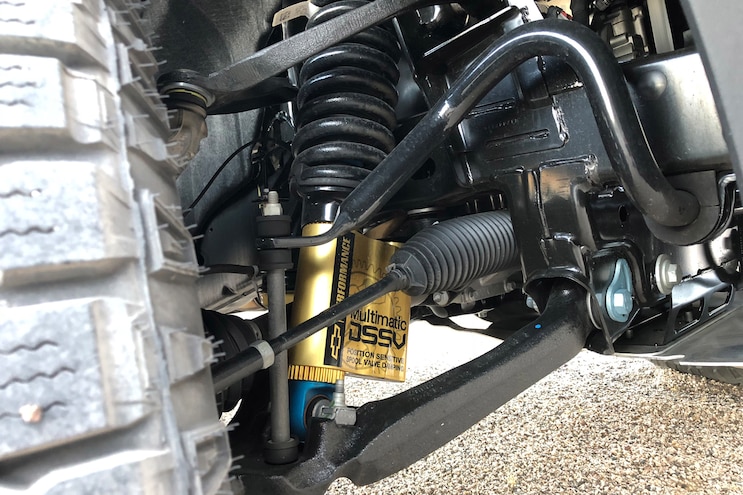 View Photo Gallery | 4 Photos
Photo 2/4   |   Multimatic spool valve shocks are the secret sauce in the ZR2’s recipe. While not a true monotube or an internal bypass, they resist heat well and have similar performance characteristics.
Around town, the DuraTracs feel a little chunkier and noisier, and directional stability isn’t quite as good as a Colorado Z71, but these are all minor drawbacks to the overall package. The diesel ZR2 runs noticeably stiffer springs, and we’ll admit we like the softer spring rates and lighter weight of the V-6 over the nose; however, the truck feels as if it were springed with the idea of additional accessories in mind (such as a winch bumper). We do wish the truck were an inch lower and that the inch went toward downtravel, as certain cross ditches and railroad tracks easily max out the suspension—you can feel the wheels yank the chassis down when the droop limit is reached. 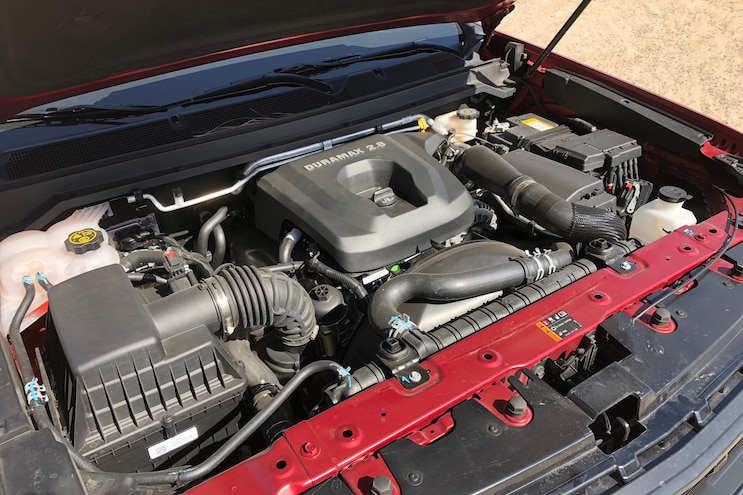 View Photo Gallery | 4 Photos
Photo 3/4   |   The 2.8L four-cylinder Duramax makes 186 hp and 369 lb-ft of torque. It’s a great little mill but could use quicker spool up and a bit more horsepower.
The torque-doling baby Duramax could use an additional 20 to 25 hp and a little less turbo lag, but it is adequate for merging into traffic and rarely needs to downshift at highway speeds. The fuel-economy label rates the ZR2 at 19/22/20 mpg, which is exactly in line with our average of 19.88 and best highway of 21.27. We regularly see over 420 miles of range from the 21-gallon tank. It also has a decent amount of DEF capacity, not requiring any additional fluid through the first 5,000 miles.
On-road compromises aside, the Colorado ZR2 is a riot in the dirt. It would be a shame if people bought the ZR2 and never took it off-road, because they would miss out on the real purpose of this truck. With off-road mode activated, the Colorado is playful and engaging, easy to drift, fast, and with the suspension working, we rarely feel like there isn’t enough travel—save for the surprise G-out and huge whoops. Thanks to a stiff cab and chassis, the suspension is allowed to work, and when the suspension is breathing, the Colorado feels just about perfect. The Multimatics make a 9-inch-travel truck feel more like an 11-inch-travel truck, thanks to the efficient way they dissipate energy.
We are excited to experience the spool valve technology over the course of the Colorado’s yearlong stay with us, as well as assess the reliability of the 2.8L Duramax drivetrain and see what kind of fuel economy we can eke out on some upcoming highway trips. 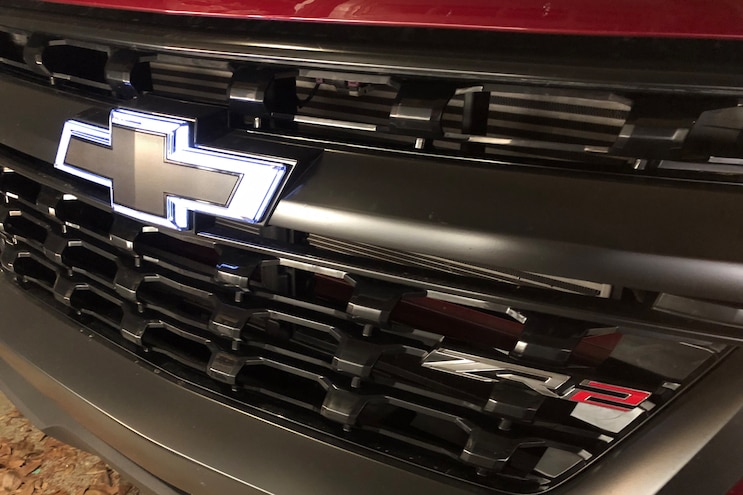 View Photo Gallery | 4 Photos
Photo 4/4   |   The light-up Bow Tie is a bit gratuitous, but we don’t care, because wherever we go, people think it’s cool. And so do we.

Previous reports: NA
Base price: $42,000
Price as tested: $50,400
Long-Term Numbers
Miles to date: 4,683
Miles since last report: NA
Average mpg (this report): 19.88
Test best tank (mpg): 21.27
Test worst tank (mpg): 18.52
Test Maintenance
None
Test Problem Areas
None
Logbook Quotes
“The ZR2 diesel is stiffer than I remember, and it could use another inch of downtravel.”
“It’s a decent ride on pavement, but in the dirt…WOW. I can’t believe how fun this truck is.”
“The Duramax could use more horsepower, but it is well-matched to the chassis.”
“The key to this truck, beyond a very stiff chassis and the Multimatic shocks, is the fact that you can turn off all the nannies and whomp.”
“A driver’s truck in the dirt, without the fear of it biting you the way the Raptor can.”