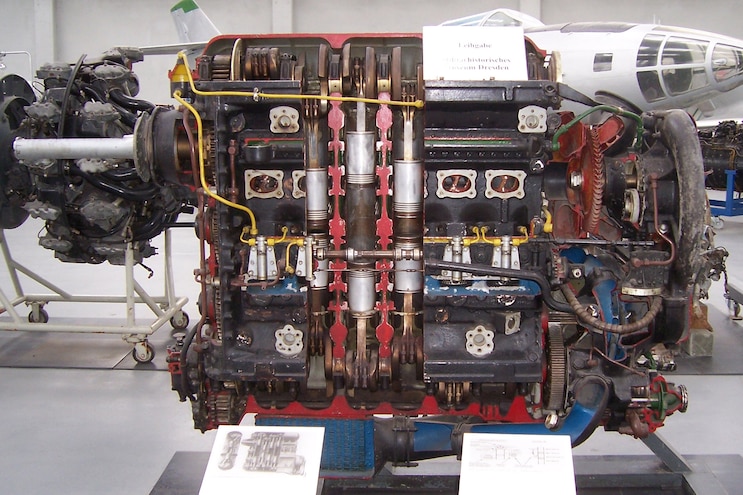 Developing new engines that perform better, weigh less, use less fuel, and meet stringent emissions standards is the primary goal of most engineers and automotive corporations. Companies continually experiment with new engine designs and configurations (including nonconventional) to find the key to achieving the most ideal diesel combustion. Millions of dollars are spent annually on different prototypes in these endeavors. One company making inroads in engine design is Achates Power, which (since 2004) has been working to develop cleaner and more efficient engines using a two-stroke, opposed-piston engine design.
What makes the Achates Power’s opposed-piston engine unique is that it does not use a cylinder head like conventional engines. Instead, the engine uses multiple pistons to create compression and ignition. Two pistons per cylinder work opposite (piston crown to piston crown) each other to compress fuel and air. This design eliminates the need for the complexity, weight, and heat loss associated with a cylinder head, which allows OPEs to be lighter, simpler, and more efficient.
Opposed-piston engines are not a new concept. The original idea dates back to 1882 and James Atkinson, who developed the Atkinson differential engine. The Atkinson engine used two pistons in a single cylinder actuated by a flywheel and connecting rods to create compression in a four-stroke cycle. The first large industrial two-stroke gas OPEs appeared in 1898 and were built by Dr. Oechelhauser in Germany. The earliest powerplant was a twin-cylinder that used one crankshaft with rods. It was a spark-ignited engine that made 600 hp.

View Photo Gallery | 5 Photos
Photo 2/5   |   This cutaway of one of the most famous opposed-piston engines, a Junkers Jumo 207, clearly shows how the two pistons move toward each other in a cylinder to compress fuel and air. The gears that connect the upper and lower crankshafts can be seen on the front of the engine (left side of photo).
A French company, Gobron-Brillie, developed smaller versions of gas OPEs suitable for motor vehicle use around 1900. In 1904, a Gorbron-Brillie car with an OPE set a “World’s Record Speed” of more than 100 mph in the flying kilometer. The first diesel version appeared in 1907. Russian designer Raymond A. Koreyvo built a working prototype and received a patent for it in France. He then displayed it at international exhibitions, where other developers saw it and began building their own versions.
There have been many different OPEs built through the years (gas and diesel versions), but smaller versions (compact enough for a car or truck) were not at the forefront. Most companies produced large-displacement versions that were used in ships, locomotives, submarines, and airplanes. The most famous diesel OPE is the Junkers Jumo developed by Professor Hugo Junkers. The Jumo 205 was the first successful diesel aircraft engine. There were several different versions of the Jumo built (205, 206, 207, and 208) from the 1930s through World War II.
All the Jumos were vertical two-stroke, six-cylinder, 12-piston, supercharged engines that had two crankshafts and used four injection nozzles per cylinder. Two camshaft-operated injection pumps were used per cylinder to feed the fuel nozzles. Air was drawn in through the intake port located under the lower piston and spent gases exited the exhaust port located under the upper piston. This layout worked because the lower crankshaft was located 11 degrees behind the upper. By adjusting the timing, the pistons opened and closed the ports at different times to create proper scavenging in the cylinder. 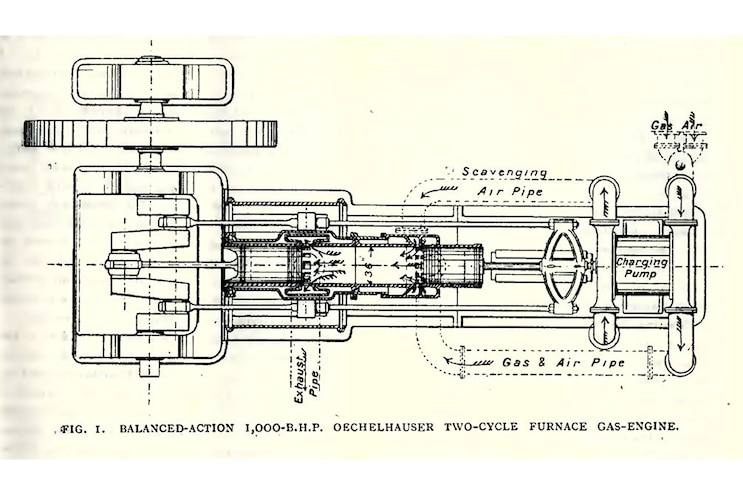 View Photo Gallery | 5 Photos
Photo 3/5   |   The illustration of the Oechelhauser two-cycle opposed-piston engine shows how it only used one crank and connecting rods to move two opposing pistons. The Oechelhauser was a large, horizontal industrial engine.
Today, Achates Power has taken the not-so-clean-running opposed-piston engine design of the past and brought it into the next century with innovation and modern technology. By using a two-piston-per-cylinder, two-stroke combustion cycle, the Achates OPE provides twice as many power strokes as a four-stroke equivalent. The smaller-displacement, higher-output units have performance that is equal to larger conventional oil-burners yet emit fewer emissions and are lighter. Another advantage of this design is that it can be run on different fuel types, like gasoline, diesel, natural gas, JP8, and biofuels. Diesel is the most efficient in compression ignition due to its energy density.
The lack of a cylinder head in the OPE is offset by an improved surface-area-to-volume ratio in the combustion chamber, which reduces heat transfer and waste. Ports are used in the cylinder walls in place of poppet valves and the friction-creating valvetrain. Air is drawn in at intake ports at one end of the cylinder and exhaust exits from ports at the other end. The cylinder ports are opened and closed by piston motion, which also allows gases to flow in one direction—uniflow air scavenging, which reduces the work of the supercharger while improving efficiency and reducing nitrogen-oxide emissions. Fuel is injected directly into the cylinder horizontally by two injectors. Two separate crankshafts, one at the top of the cylinder and one at the bottom, move the pistons. The cranks are connected by gears. 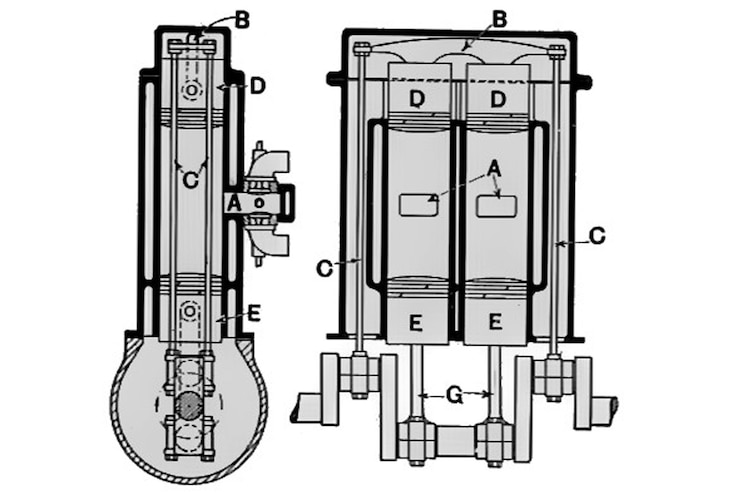 View Photo Gallery | 5 Photos
Photo 4/5   |   The Gobron-Brillie was much smaller than the Oechelhauser but used a similar single-crank design. A Gorbron-Brillie opposed-piston engine mounted in a car set a “World’s Speed Record” of more than 100 mph (on-the-fly kilometer) in 1904.
Working with engine manufacturers worldwide, Achates Power is intent on bringing the opposed-piston engines to market. It is currently working on 2.7, 5, 10, 14, and 200L engines for different applications. Working with Aramco Services, an Achates 2.7L opposed-piston gasoline compression-ignition engine has gone through testing in a Ford F-150 pickup. The engine makes 270 hp and 480 lb-ft of torque and is able to achieve a combined estimated 37 mpg (which is better than 2025 CAFE standards) while emitting less CO2. A diesel version of the engine makes an estimated 42 mpg combined.
A partnership with Cummins began in 2014 for the designing, building, testing, and commercializing of a new family of combat engines for the U.S. Army using the opposed-engine configuration. The design being developed will be modular and scalable, with a wide variety that can range from 4.0L (300 hp) to 20.0L (1,500 hp) and will use common architecture and parts. The engine being developed for the Bradley family of vehicles used by the Army is said to have 50 percent more power, 25 percent better fuel economy, and 30 percent less volume than current engines used in these vehicles. 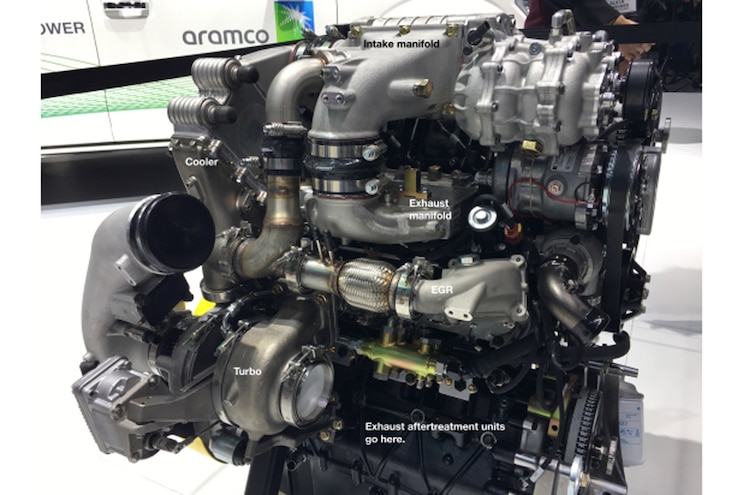 View Photo Gallery | 5 Photos
Photo 5/5   |   The picture shows a side view of 2.7L Achates Power opposed-piston gasoline compression-ignition engine that was tested in a Ford F-150 and achieved a combined fuel economy of 37 mpg. The engine makes 270 hp and 480 lb-ft of torque.