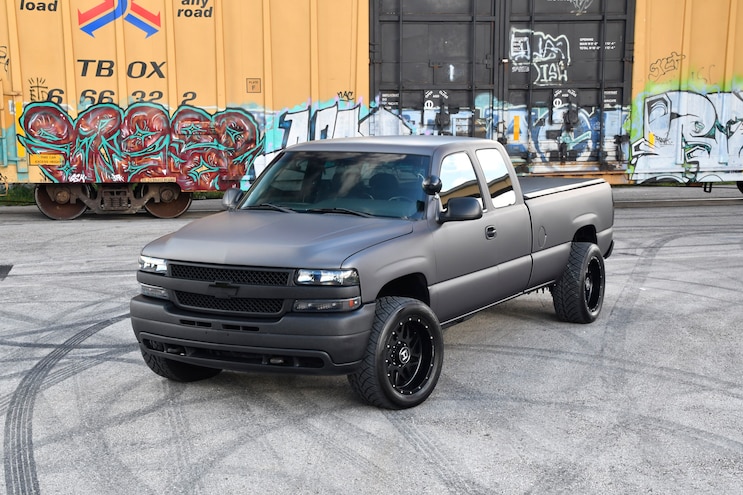 Ivan Lopez of Miramar, Florida, is an accomplished diesel technician and the operations manager for his family’s business. His love of diesels began almost by accident back in 2006, when he bought his ’02 Chevrolet Silverado 2500HD, which was purchased to be a functioning work truck. The chassis was all original, except for a set of leaf clamps on the rear springs and KYB shocks at all four corners.
Like most of us, Ivan’s diesel-performance affinity began modestly, with just a few upgrades for the rig: a DiabloSport programmer, Summit Racing exhaust system, Fabtech Motorsports 6-inch lift, and 35-inch tires. The truck was a hard worker on the job site and fun on the street. One day, however, everything changed. 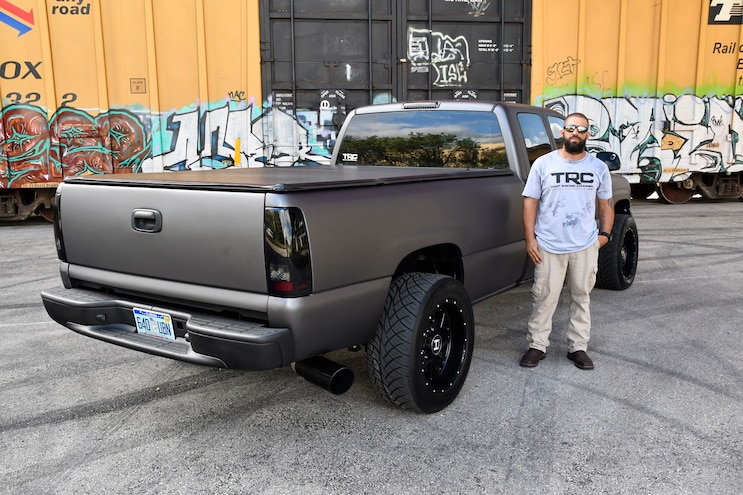 View Photo Gallery | 78 Photos
Photo 2/78   |   Diesel Ivan 2002 Chevy Silverado
A street challenge from a Dodge Ram 3500 was accepted, with Ivan knowing the two-wheel-drive Dodge had no chance against his four-wheel-drive Chevy. The outcome was decisive, and from that moment, Ivan’s high-performance obsession began in earnest. By 2007, after adding hotter PPE ECM calibrations, Ivan realized the stock Allison 1000 five-speed automatic transmission wasn’t up to the challenge. Doing his own work, he solved the problem, thanks to information found in an Automatic Transmission Service Group service manual. Once the truck was back on the road, the next serious modifications were a PPE Stage V transmission upgrade kit and an HTT 66mm turbocharger along with a K&N Engineering cold-air intake. The combination was impressive, helping the Silverado turn 8.7-second e.t.’s at Homestead Miami Speedway, a local eighth-mile dragstrip. Life was good in Ivan’s world, but that happiness was short-lived.
Later, when pulling a trailer to the job site, “A connecting rod decided it wanted to see the light and installed a window in the block,” Ivan says. The search began for a new block, rods, and pistons from SoCal Diesel. Once the block was procured, Ivan installed a Maximized Performance Inc. BorgWarner S400/S300-based compound-turbocharger set, dual CP3 injection pumps from ATS Diesel Performance to double the fuel, and injectors punched to 60 percent over. 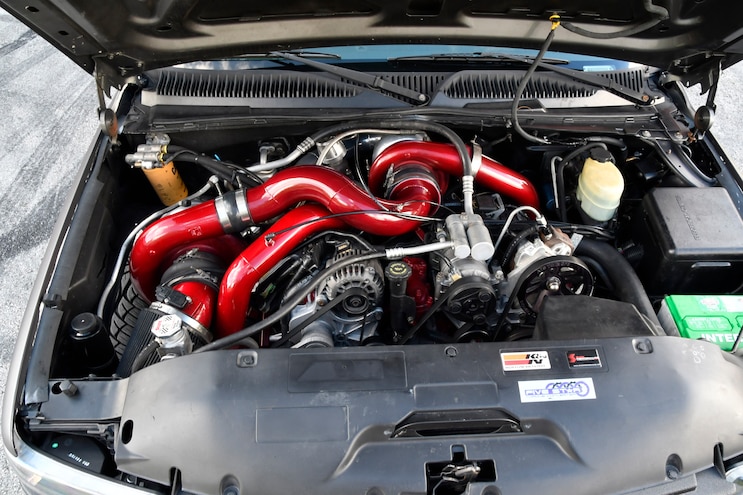 View Photo Gallery | 78 Photos
Photo 3/78   |   Diesel Ivan 2002 Chevy Silverado Engine
The engine changes not only increased power, they also triggered a major change in Ivan’s philosophy, making performance more important than a sky-high profile and off-road antics. The lift kit and mud rubber were replaced by a set of 18-inch Pro Comp wheels and Nitto Terra Grapplers. Everything came together perfectly on the track, with the truck making 11.60-second/120-mph passes on the quarter-mile and dusting Z06 Corvettes, Cadillac CTS-Vs, and supercharged Mustangs on the street.
Unfortunately, however, the maintenance saga continued. Since durability is a result of design, surviving abuse means strengthening every component. One day, while driving home from work, Ivan came upon a semitruck moving at about 30 mph. He decided to show the driver how quickly a high-performance diesel could move—with a blast of artillery-round acceleration that actually showed the trucker what a melted piston does to an engine! Mahle 0.40-over pistons solved that problem, along with a new set of 100-percent-over injectors. 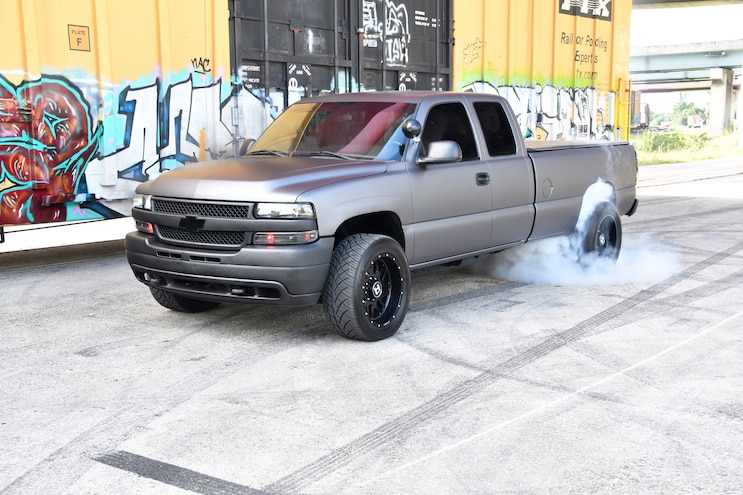 View Photo Gallery | 78 Photos
Photo 4/78   |   Diesel Ivan 2002 Chevy Silverado Burnout
Anxious to test the new setup, Ivan headed to Immokalee Regional Raceway, where a local competitor in a diesel-powered Ford reminded him he doesn’t own the only truck that makes 7-second passes at 100-plus mph. After two successful back-to-back runs, Ivan noticed a problem with the crank-position sensor. With only five passes on the truck since it was overhauled, he realized hyper-speed has its tradeoffs. As a result of a broken crank, Ivan’s power obsession reached a natural conclusion and was put on hold for a couple of years.
Older and wiser, Ivan revisited his need for speed with a comprehensive change in plans, one that required a top-to-bottom makeover. Starting with the basics, he located a new 6.6L Duramax LML block that boasts 40 pounds of increased structural strength. In addition to the new block, he installed a new crankshaft, camshaft, and BorgWarner S400 and S500 compound turbos, along with pushrods, valvesprings, flywheel, and damper assembly. PPE up-pipes and headers extract spent gases, and, yeah, there’s a nitrous bottle under the rear seat just in case.
The Allison 1000 was updated with the new SunCoast Diesel Transmissions GMAX rebuild kit and ATS Diesel Performance 2,300-rpm-stall torque converter, ensuring the gearbox can handle the massive torque. 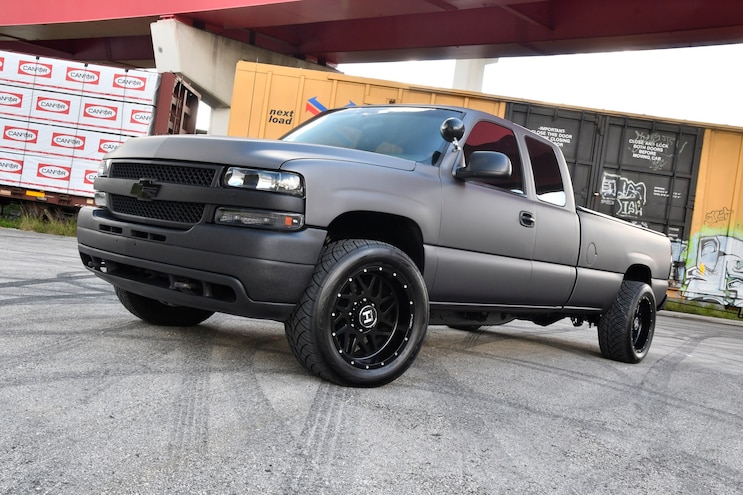 View Photo Gallery | 78 Photos
Photo 5/78   |   Diesel Ivan 2002 Chevy Silverado Front View
Cosmetics were also addressed by the team at Ventura Auto Body in Hialeah, Florida, who smoothed the dents, followed by an under-the-radar, super sleeper, dark gray wrap installed by Ernie’s Wraps in Miami. A set of 20-inch Hostile Stryker Asphalt rims was added along with Nitto NT420S tires. Ivan also upgraded the interior with charcoal and black leather seats, new carpet, and a headliner. Now bulletproof and running perfectly, the high-performance truck is great fun on the street and strip.
How does Ivan feel about his truck? With characteristic humor, he says: “I’ll pull your boat, help you move, tow your car, take you to church on Sunday, and smoke your ass on the way home!” Throughout the 10-year build, his badass rig has brought him both joy and heartache. There are moments, however, when he’s behind the wheel whipping a local Viper driver that somehow makes it all worth it. (And, just in case you think that’s an exaggeration, check out youtube.com/watch?v=Jb1pwGDr_lk.
Rolling on 20-inch wheels, Ivan Lopez’s ’02 Chevrolet Silverado 2500HD’s dark gray wrap and low profile make it the ultimate street sleeper, destined to hurt the feelings of the unsuspecting.
Twenty-inch Hostile rims are wrapped in sticky Nitto NT420s rubber, ensuring all four corners do their part in launching the 7,200-pound truck off the line.
The inner fender panel on the passenger side went away, making room for the compound-turbocharger package.
Bedliner sprayed on the bumpers and grille is functional and adds to the truck’s sinister persona.
With the exception of the oversized tailpipe and Mag- Hytec differential cover, there are few clues this badass Silverado 2500HD can cover the quarter-mile in 10.9 seconds at 126 mph.
It’s still a functional work truck, and there’s plenty of room in the bed and a TriFold tonneau cover to protect the contents.
With the driveline switched to two-wheel drive, Ivan lights up the rear wheels.
The plush interior belies the work-truck status of the Silverado. Inside, there is plenty of room for the crew, who enjoy air-conditioning and a custom stereo. 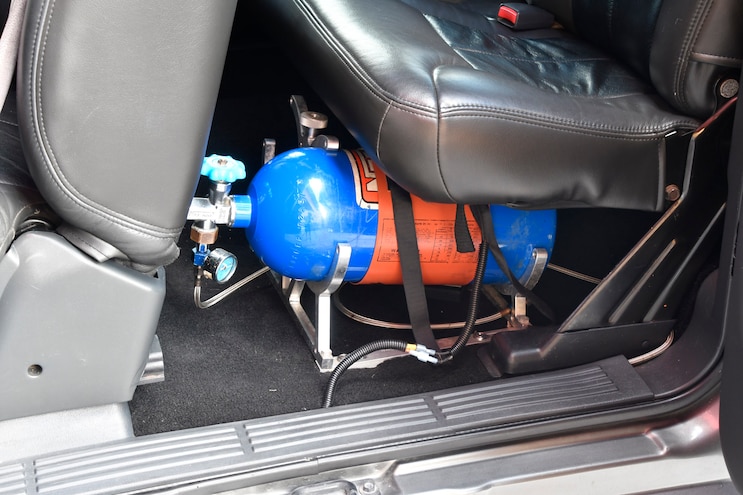 View Photo Gallery | 78 Photos
Photo 63/78   |   Just in case things get serious, the 150hp nitrous-oxide shot is plumbed to the Duramax, with the bottle mounted under the rear seat.
Bulletproof after multiple rebuilds, the 6.6L Duramax LB7 engine pumps out an estimated 1,200 hp and almost double that in torque. The compounded BorgWarner S500 and S400 turbos, with their cherry red powdercoated ductwork, snake their way around the engine bay.
The 10-year connection with the truck has had its ups and downs, but Ivan says it was worth every minute.